Three-quarters of Parisian bistros are said to be run by Aveyronnais from south-central France, descendants of those who, forced by dwindling employment, moved north in the 1870s to seek their fortunes. The men found work as water carriers and coalmen, and, when gas pre-empted coal, they joined their wives who had, in the meantime, opened small cafés. But not everyone decamped for Paris. And for one restaurant family, hugely revered in the world of cuisine, the Aveyron department, specifically the Aubrac plateau, always remained their home. It still is, with father-and-son Michel and Sébastien Bras now redefining the French table from haute cuisine to everyday snacks as they explore new, more modern ways of feeding people.

Michel’s parents ran a small hotel and an attached restaurant in what Parisians call la France profonde—deep France, which Michel himself terms “an isolated desert”—where he grew up absorbing a passion for food, and the soil it sprang from. Rather than following the usual global restaurant route to stardom, Michel taught himself to cook by reading, experimenting, and tasting, eventually opening his own place and, in 1999, gaining the three Michelin stars that bring diners on a pilgrimage to this remote region. Michel has been uncannily prescient at launching ideas that fire imaginations and palates. Long before it became the norm, he was the standard-bearer for local, seasonal food; he was an early instigator of the vegetal menu—consisting mainly, though not exclusively, of vegetarian dishes; and anyone who has ever eaten a chocolate dessert described as “melting” or “volcanic” (now available even at supermarket level) owes a debt to Michel’s original coulant. He is also credited with inventing the swashes, dots, and other forms of plate decor now seen everywhere. 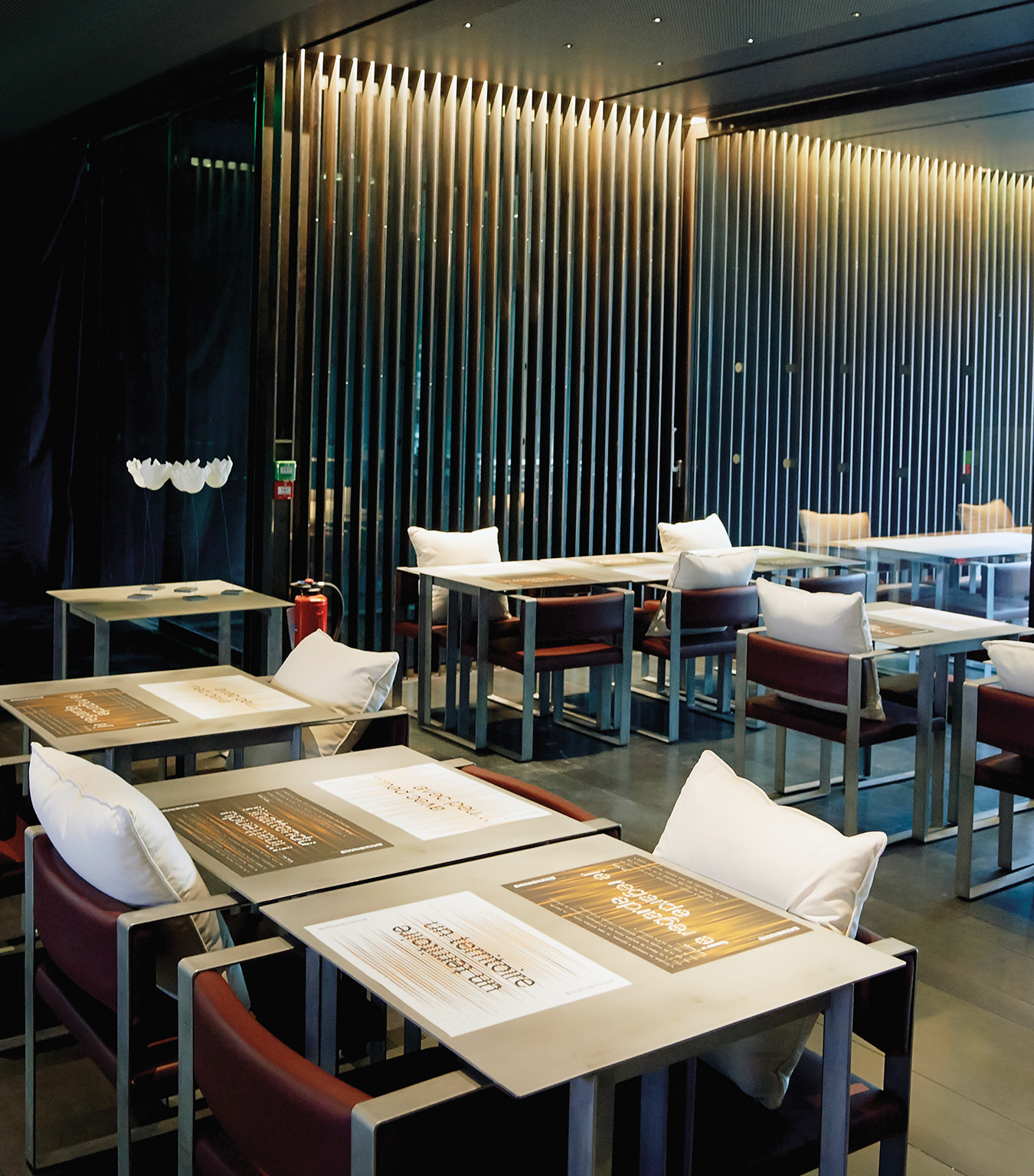 Michel is a quiet, self-effacing man, modest and single-minded. In his kitchen, he displays an almost surgical focus as he decorates plates and arranges components—not that the approach of either father or son favours style over substance. Refined, simple, and rooted, it relies on the innate taste and beauty of ingredients for its effect. To take just one example, Michel’s son, Sébastien, alchemizes something as commonplace as an onion into a luxury ingredient by allying it with saffron.

Just beyond the village of Laguiole, a blink-and-you-miss-it sign indicates the narrow road that leads to the Bras family’s iconic restaurant (named, simply, Bras), a glass prow overlooking a green patchwork of pastures, farms, and forests. Suspended between earth and sky, it seems an apt architectural metaphor for the roots and wings approach that typifies the Bras’s cuisine.

Just beyond the village of Laguiole, a blink-and-you-miss-it sign indicates the narrow road that leads to the Bras family’s iconic restaurant (named, simply, Bras).

Sébastien helped out with Bras since its founding in 1992, then permanently joined the family firm after culinary school; he has been in charge of the flagship location (previously named Le Suquet) for the past six years. It was “a progressive arrangement” he says of the gradual relinquishment and assumption of the reins. Apart from a sister restaurant, the Toya at the Windsor Hotel, opened in Hokkaido, Japan, in 2002, there are no plans to export the Bras three-star concept elsewhere, but there have been definite moves to bring the name to a wider audience in France.

In 2014, the Musée Soulages opened in Rodez, the capital of the Aveyron. Almost as much of a draw as the art has been the adjacent Café Bras, which serves uncommon food for France, and uncommon hours with bistronomie from 10 a.m. on, afternoon snacks, and the Miwam, a healthy grilled sandwich invented by Sébastien. More conventional is a cuisine du marché three-course lunch; less conventional is the price, which, at 31 euros ($43 Canadian), represents extraordinary value.

To be fair, the Bras are not the first three-star chefs to explore the bistro concept, but recently they have gone one step further. Even more accessible than Café Bras and being able to offer “fast cooking” (not fast food) are how Sébastien positions the latest additions to the portfolio. Named Capucin, these are casual eateries, with one in central Toulouse and, in season, a second at the tourist-attracting Millau Viaduct. The menu revolves around the capucin, a crepe cone—filled with, for instance, spinach and trout, or parsnip and Gascon chicken, or lamb and beans—that costs little more than a Big Mac. (When asked his opinion, Sébastien considers McDonald’s “a good economic model,” but adds, “no comment on the food.”)

The Miwam sandwich with cod. Photo by Michel Bras.

Not for the first time, the Bras family is in the vanguard of a trend. Lately, low- and mid-range French restaurants have come under well-deserved fire for serving industrially produced, frozen or freeze-dried products—sometimes as entire microwaveable premade meals—with up to 80 per cent reputedly guilty. Since July 2014, a new program called fait maison allows bistros to use its logo, a roof over a casserole, only if a dish is genuinely made on the spot. “It’s changing a little in France,” says Sébastien. Café Bras he calls “cuisine avec amour, authentique.” No translation needed. “The Capucin brand will be developed,” he says. Even at this everyday level: “the objective is [still] to work with local producers.”

The eponymous three-Michelin-star restaurant remains the cornerstone. Steered by the seasons, the menu changes every day. Twice weekly, Sébastien leaves Laguiole to drive about 50 kilometres south to the market in Rodez where vegetables, and fish from the Mediterranean and the Atlantic, arrive daily. “Some of the team forage,” he says, and then there is the garden, source of herbs, greens, and edible flowers unobtainable elsewhere. He does not cast his net widely.

At 6 a.m., two hours before kitchen work gets under way, the boulangerie is already baking breads and pastries for petit déjeuner for the 13-room hotel attached to the Bras restaurant. Lunch over, Sébastien goes for a bike ride through the countryside, returning at 5 p.m. for dinner service. He, his wife, Véronique, and their young son and daughter live next to the restaurant. It’s a civilized life, a family life. Sébastien oversees cooking-school demonstrations and has other projects to keep him busy during the winter when Bras restaurant closes because, at 4,000 feet, winters are savagely cold and snowy.

“Erythrone [dog’s tooth violet], a wild plant, marks the start of the [new] season,” says Sébastien. “La cuisine des petits riens is in the culture,” he explains, using a term that loosely translates as leaving little unused, including leaves, stems, or the core of a cabbage being prepped in the light and sunny kitchen. Here, in season, employees eat at a large granite-topped table that switches identity at the start of service when a still life of vegetables as abundant and varied as an Arcimboldo painting lets diners look in to see what will soon be on their plates.

The leitmotif of a Bras meal is the flavours: pure, profound, and teamed in unexpected ways.

Wearing green aprons, staff clean picture-perfect ceps while, using a cardboard template, a young stagiaire cuts precise squares from long ribbons of butternut squash to create the ravioli that will sandwich them. The mood is quiet and focused but relaxed as two people ease the meat out of crab claws, lobster shells bob in a stockpot, an impeccable ruby log of beef filet stands ready, and someone freights the cheese trolley with its cargo of Roquefort, Laguiole, and small goat cheeses.

As many as eight people do the mise en place for Michel’s signature dish, gargouillou, which he describes as “a hymn to the season.” Never the same, this Monet’s garden of a plate brings together as many as 80 different herbs, flowers, and vegetables. With components as diverse as hops, clover, crosnes, and country plants like yarrow—all prepared separately—gargouillou is an edible cabinet of botanical and culinary curiosities. Given the many textures and colours, it is hard to duplicate a mouthful. Each one is revelatory with even a slice of green bean, just wide enough to span two tines of a fork, intensely flavoured. 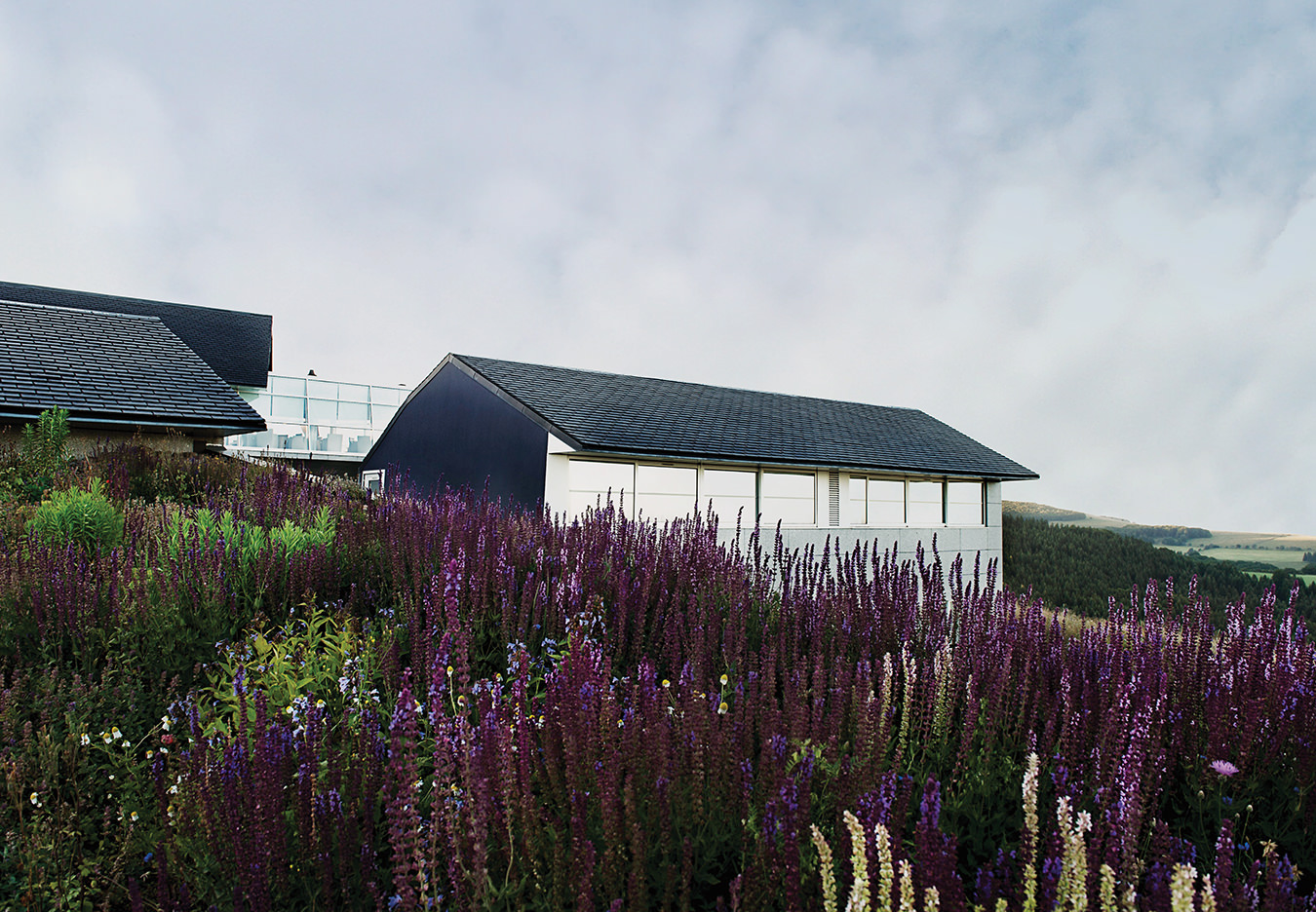 Sébastien uses the word niac, the origin unknown, to encapsulate the cuisine: “It’s a combination of visual, smells, colours, tastes, and texture,” he explains. The leitmotif of a Bras meal is the flavours: pure, profound, and teamed in unexpected ways. Rolled celeriac is stuffed with Mexican tarragon, its licorice flavour singing through. Plump roasted figs are paired with translucent ribbons of fennel, sheep’s milk cheese, and an inspired condiment of powdered orange peel and juniper berries that conjures up a 1920s cocktail.

The Bras family may be physically rooted in the Aveyron, but their taste buds roam frequently outside their region with North African ras el hanout spicing the crisp, papyrus-thin wafers that arrive first at the table. Bringing tastes closer to home is the accompanying butter garnished with the garden-grown fennel that features in the logo. Other local touches are the classic, wood-handled Laguiole knives, made nearby, and, unannounced on the menu, a serving of aligot, a rustic but suave union of cheese, potatoes, crème fraîche, and garlic unique to the region. The most playful touch comes at the end when, after the sophistication of a molten-centred chestnut coulant, a dessert cart arrives laden with miniature cones and containers of ice cream, including a chocolate version dense with cherries, a lemon variety as rich as pure lemon curd, and the whimsical option of sprinkles. Unpretentious, fun, and taking even the most urbane diner back to their childhood, it is a reminder that Bras is still a family restaurant. Five Things to Eat in Toronto This Summer

The Wonderful Tradition of Walleye on the Prairies