Whenever a carmaker introduces a new vehicle, the press releases will inevitably speak to how their latest offering is better than ever and different from the rest. At times, the former is true, but rarely is the latter the case—when you stop to think about it, all vehicles are more or less the same.

By way of illustration, if you take a moment to picture a modern sedan, it will have four doors, an engine in the front, a trunk in the back, and a profile that’s lower than an SUV but higher than a sports car. It doesn’t matter whether that sedan in your mind is a Toyota, a Mercedes-Benz, or anything in between—a sedan is a sedan is a sedan.

In other vehicle categories, there is a little more leeway. A sports car, for example, could have an engine in the front, in the middle, or in the back. It could have two-wheel drive or all-wheel drive. It could have a manual transmission or some form of automatic. But still, it will be low to the ground and it will perform within certain acceptable parameters because, clearly, it’s a sports car.

The exception to these rules governing the automotive world is the 2014 Rolls-Royce Wraith, because it is unlike any other car on the road. It is not a variation on a theme—it is arguably the most unique production automobile in the world today. Here’s why. 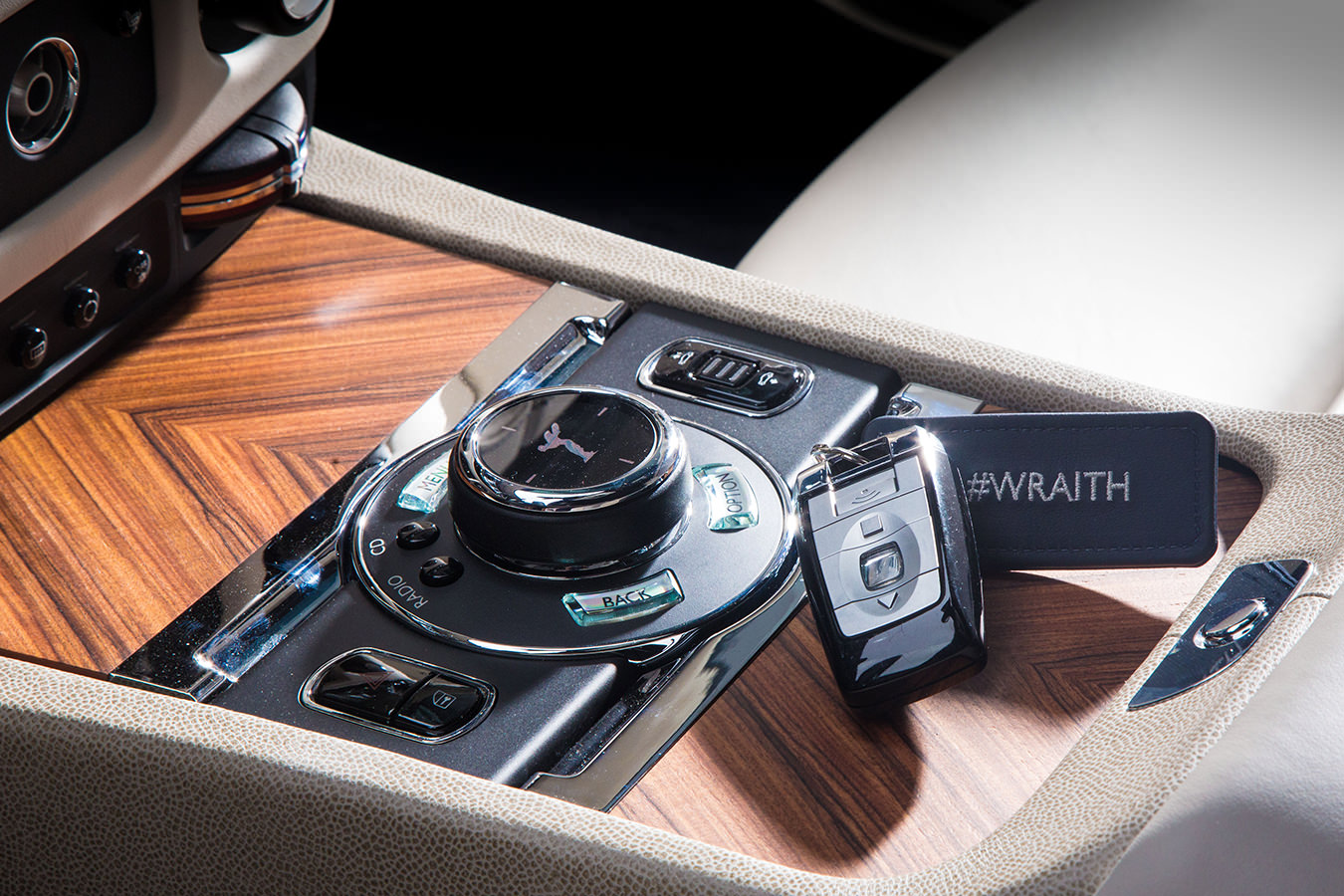 First, it is the most powerful and the fastest Rolls-Royce in the 110-year history of the brand. Some might contend that the staunchly British cars have never been known for their outright pace. But a number of Rolls from past eras were entered in all manner of reliability and speed trials in the company’s early days, setting three world speed records and proving victorious in Grand Prix racing.

To top it off, the current lineup comprises three models, all powered by V12 engines, so there is a tradition of high performance here.

In the case of the Wraith, that engine displaces 6.6 litres, develops 624 horsepower, and churns out 590 lb-ft of torque. It’s a twin-turbocharged V12, shared with the Ghost sedan, and engineered by corporate parent BMW Group. It’s a gilded monster, capable of sending the Wraith from a dead stop to 100 kilometres an hour in a very fast 4.6 seconds. Top speed is electronically limited to 250 kilometres an hour, but if that limiter were removed, it would be capable of so much more. 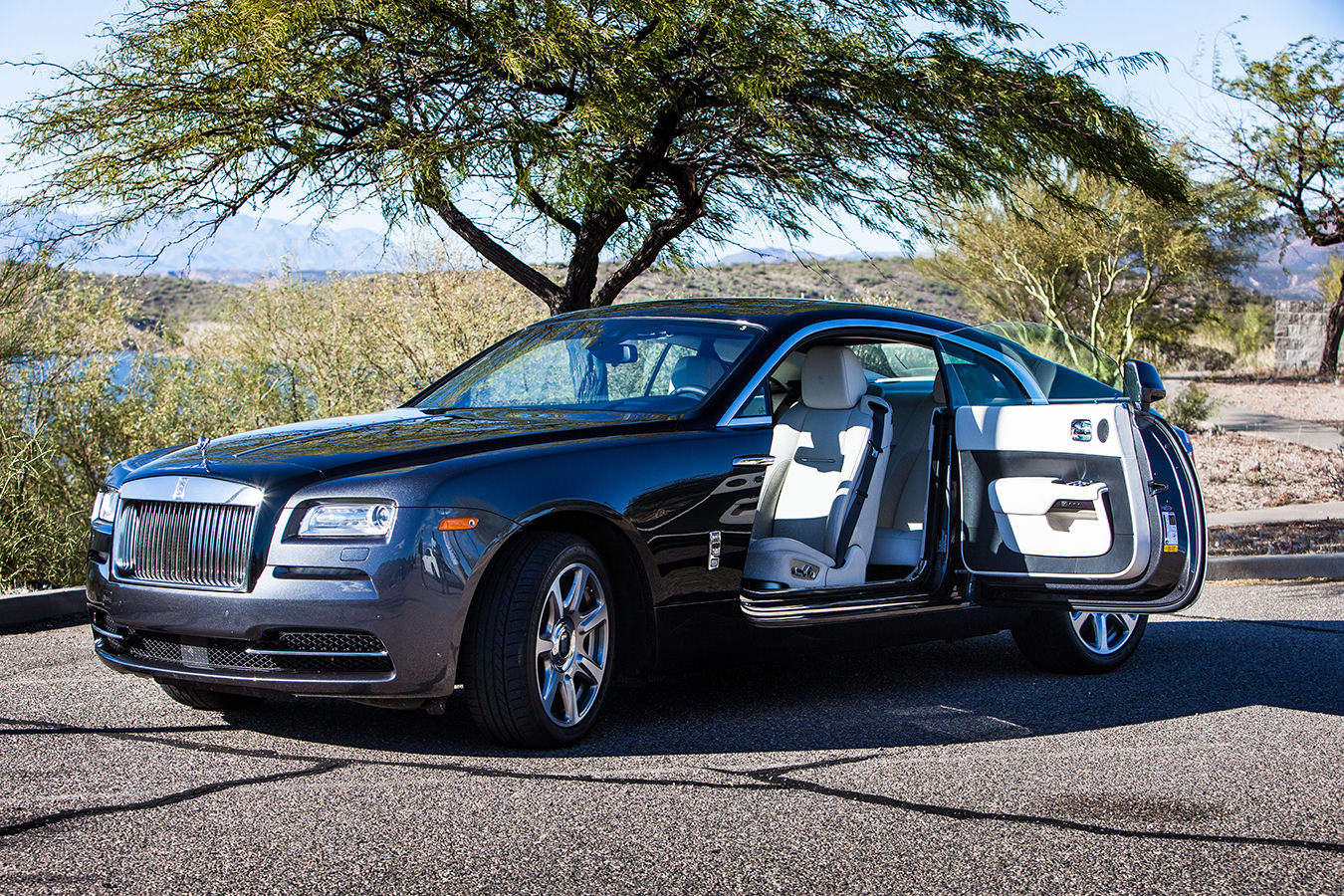 The Wraith, as with all the vehicles in the modern Rolls-Royce fleet, is a big car—2,440 kilograms, to be precise. Nevertheless, as soon as the slightest pressure is applied to the hefty accelerator pedal, mountains are moved. The performance of the Wraith is the very definition of the word effortless—without even the slightest hint that transgressions are about to occur, the posted speed limit has vanished in the rear-view mirror like a dim memory.

The immense power of the Rolls-Royce is aided and abetted by an eight-speed automatic transmission that is, well, completely automatic. In other words, there is no sport button, no shift lever, and no paddle shifters with which to assume some measure of manual control over the gears. The only adjustment is a “low” switch on the transmission stalk, presumably for those times when you’re attempting to use the Wraith to tow a cruise ship.

This transmission is far from your typical automatic, though—it’s a Satellite Aided Transmission, which predicts what gear you will need for the road ahead, even before the road ahead has come into view. So if you’re driving on a straight stretch but approaching a hairpin turn, the Wraith is way ahead of you, and it will have automatically selected the correct gear for that corner. This is yet another aspect of the Wraith that helps to establish its uniqueness.

The Wraith’s collection of seemingly contradictory characteristics makes driving the car akin to piloting a glider—smooth and silent, unperturbed and in harmony.

As should be expected from a modern Rolls-Royce—or a Rolls-Royce of any vintage, for that matter—the ride of the Wraith is superb. The air suspension system, in concert with electronic variable damping, delivers a driving experience that is, again, entirely unique. It’s not overly soft like the luxury cars of old. But it’s not firm like a typical grand touring coupe with sporting purposes from the likes of Aston Martin or Bentley. Rather, somehow, it’s somewhere in between.

The steering is nicely weighted and natural, although it’s not quick. The sense is that if the Wraith were really thrown into a corner, the result might not be that pretty. Of course, this would never be the raison d’être for this particular car. Notwithstanding these facts, the car corners with surprisingly little body roll and with a level of composure that is also unexpected.

The Wraith features a computer that monitors the trajectory and lean angle of the car every 2.5 milliseconds, triggering the air suspension system, brake system, and stability control to keep the Rolls on an even keel at all times. This collection of seemingly contradictory characteristics makes driving the Wraith akin to piloting a glider—smooth and silent, unperturbed and in harmony.

These impressions are, of course, transmitted to the driver through the various elements found in the passenger compartment, which is fabulously lush and ridiculously quiet. The oversized steering wheel will remind most of the helm of a yacht, but here the wheel is thicker—befitting a car that is the sportiest in the fleet by far. The black chrome dash dials with orange-tipped needles and optional head-up display speak to the car’s dynamic nature. In addition, as with other Rolls-Royces, the gauge cluster includes the famous power reserve meter, which indicates how much of the car’s abundance of horsepower remains in the proverbial tank. (Hint: a lot.)

All the controls in the Wraith have weight and drama to them, from the buttons that close the forward-facing doors to the metal organ-stop plungers to the Spirit of Ecstasy Rotary Controller used to operate the car’s many climate control, audio system, and navigation system functions. The centre console showcases a 10.25-inch touch screen with swipe, pull, and pinch functionality, as well as the ability to read cursive characters written by fingertip. To reinforce the notion that the Wraith is very much a next-generation Rolls-Royce, there is a USB port and 20.5 GB of on-board storage capacity (enough for some 5,700 songs), and the front seatback pockets are specifically designed to hold a pair of iPads.

The cabin configuration consists of four individual seats—covered in the most exquisite natural-grain leather, of course. The seats represent a nice balance of plushness and support, like fuzzy slippers with orthopedic inserts, and the version driven featured a very slick option: recessed piping with chrome bullet tips. Other traditional Rolls-Royce touches, including the optional lambswool floor mats and embroidered headrests, as well as Teflon-coated umbrellas hidden away in the doors, complete what is a very exclusive picture.

For sheer drama, though, nothing matches the Starlight Headliner, available for the first time outside the Phantom line. Ticking this box on the options list sees 1,340 fibre optic lights sewn by hand into the headliner leather roof lining. The pattern of these lights can be customized to match the night sky seen from a given place at a given time at any moment in history; a perennial favourite is for Rolls owners to re-create the night sky from the evening they were born. With the headliner illuminated and the 1,300-watt audio system pushed to its limit, the effect is as mesmerizing as a laser light show at the local planetarium. 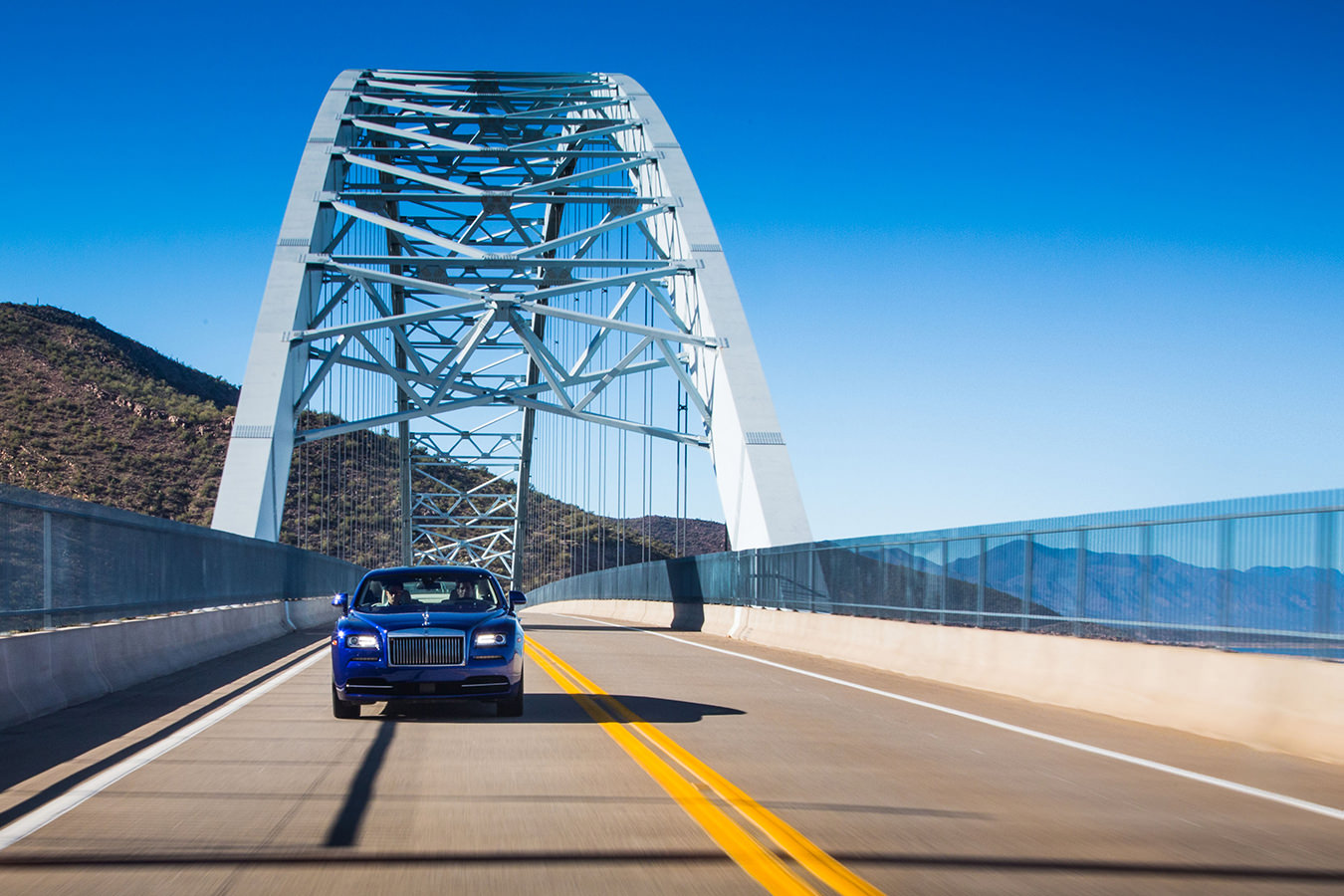 At last, we arrive at that which perhaps distinguishes the Rolls-Royce Wraith the most from any other car in the world: its exterior styling. The car is ostensibly a grand touring coupe, but this broad classification doesn’t even begin to scratch the surface. While the Wraith has the basic shape of a coupe, it’s a fastback that more closely echoes classics from the 1930s than anything currently on the market. When paired with the optional two-tone paint scheme that visually separates the hood, roof, and trunk from the rest of the car, the shape is emphasized further.

The crowning glory of the car is the legendary Spirit of Ecstasy hood ornament, another staple of the Rolls-Royce offering that is available in four versions, including gold-plated and illuminated. On the Wraith, the figurine is set farther forward on the front grille and angled five degrees lower than on any other car to reflect this model’s sporting attributes. In a word—unique.