“Welcome to Churchill, land of the unexpected.” This is my guide’s greeting soon after I touch down at Churchill’s airport. I am set to venture into the wilds of northern Manitoba, where expectations of the unexpected translate into a feeling of sheer suspense. I am here to witness the fantasy of the great white ice bears roaming the tundra, to see if a Canadian safari exists on the level I have only encountered on the plains of Kenya. The forecast for bear-spotting is promising, so long as the weather holds.

Churchill is located 1,100 kilometres north of Winnipeg. The closest gravel provincial road is 170 kilometres to the south, separated from town by dense forest and the occasional train track. No roads lead to Churchill—yet the town, population 1,000, hosts a staggering 20,000 visitors each year. Their common purpose is clear and somewhat daring: to observe polar bears in the southernmost and most accessible location on the planet. With good reason, Churchill has earned the nickname “polar bear capital of the world”. It’s not exactly the easiest place to get to, but then again, the best places never are.

My journey started with a flight to Winnipeg, followed by a 2.5-hour flight to Churchill, and then a 20-minute helicopter ride to Seal River Heritage Lodge, on the edge of Hudson Bay. When I touched down in the middle of August, the temperature was 10 degrees. Save for two fellow Canadians, other adventure-seekers hail from Australia, the United States, Germany, and England, all in the pursuit of the polar bear. 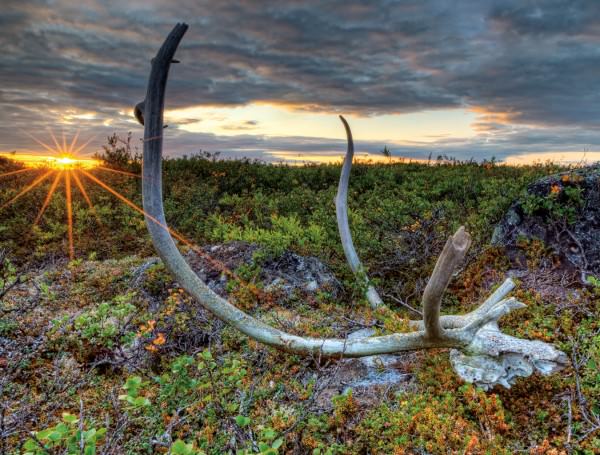 Churchill is a Canadian landmark apart from its bear-found fame. In 1769, the first astronomical observations made in Canada were conducted here. And after the Second World War, Churchill was the site of a Canadian-American atmospheric research centre, complete with regular rocket launches. Even though the research range closed in 1985, keeping an eye on the sky is something Churchillians still do—they live in one of the top three places in the world to see the Northern Lights.

Adventure company Churchill Wild is run by husband-and-wife team Jeanne and Mike Reimer, a Manitoba-born duo who, for the past 15 years, have successfully continued on a path carved by Jeanne’s parents, Doug and Helen Webber. The latter started up Webber’s Lodges about 40 years ago, distinguishing their lodges as the definitive destinations for those intent on fishing, hunting, and exploring Manitoba’s north. The remote Seal River lodge consists of a single-level, wooden eco-lodge that sleeps 16 guests. Flanking the lodge are “welcome mats”: slabs of wood with long nails jutting out of them that are used to prevent bears from getting too close. The optimum bear-viewing location is the recently renovated dining room that incorporates floor-to-ceiling windows for a panoramic view. Watching the largest living land carnivore roam just outside the window is a surreal sight—almost as surreal as standing in the lodge’s fenced-in backyard viewing platform within two metres of a white 450-kilogram bear. Hundreds of species of fauna thrive in this unique climate that consists of a collusion of the tundra, taiga, boreal forest, and marine ecosystems.

No roads lead to Churchill—yet the town, population 1,000, hosts a staggering 20,000 visitors each year. Their common purpose is clear and somewhat daring: to observe polar bears in the southernmost and most accessible location on the planet.

Here and now, a mid-August day on the tundra is my first up-close brush with these mythic bear beauties. The cold air is shocking and necessitates a bundling up of polar proportions: a T-shirt, two sweaters, a jacket, three pairs of leggings, rain pants, and a coat all make the cut, and the lodge provides thick rubber boots for the rainy mornings and marsh-like surroundings. “Do we need the bug jackets?” somebody asks. This perplexing item of apparel appeared on the Churchill Wild packing checklist. I chose to ignore it, but a few people have invested in double-mesh layered jackets. “No need for bug jackets,” says our guide, Andy. “It’s far too cold for them.” He’s referring to the bugs—they don’t like the chill, either.

After the padlocked fence is unlocked and the chains undone, I walk out into the wilderness with my senses on high alert. We’ll be walking among the wildlife rather than observing from afar; no jeeps or buses or windows to shield us. As we stride single file among the rocks, I go over the mandatory bear safety talk in my mind, reminding myself that we’re on their territory now. “If you see a bear, imitate bear behaviour,” was one of the instructions; in essence, stay cool and keep calm. “Oh, and crowd around Joe—just as a precaution.” 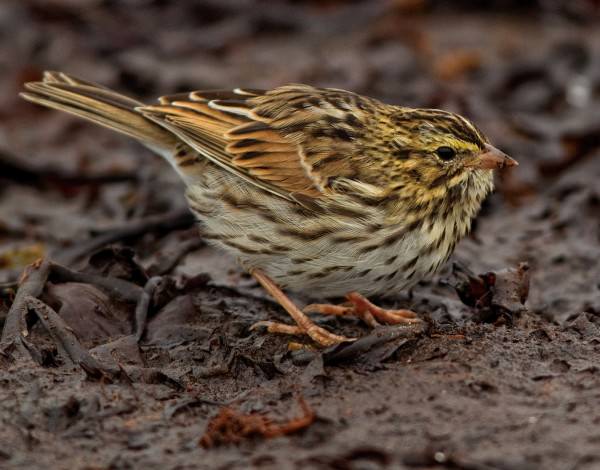 An intrepid five-year-old, Joe, is the most likely individual in the group to be confused for a seal. This news only makes him more excited, and his fearlessness is heartening. As instructed, no chatter fills the silence of this walk, and at first it feels strange. Soon enough, some make hushed conversation; I continue in silence; but all of us are prowling for bears, scanning the open and barren horizon that surrounds us. To the east is the bay, vast and blue; to the west, a pebble beach marked with numerous boulders; and behind me, flat tundra speckled with a few “one-sided” trees (their branches all blown to one side by strong winds off the water). If cold had a sound, it would sound like the wind that whistles around us. A flock of about 20 snow geese squawk overhead and break the silence. The remoteness is palpable.

I see the first bear in the distance. A big, beautiful Ursus maritimus. Adrenaline kicks in and the quiet chatter halts, followed soon after by the clicking of camera shutters and zooming of lenses. Our guides remind us to be silent—although this bear is familiar with the presence of people by now, we don’t want to disturb or frighten it—and we take a few steps forward until I’m standing about 10 metres away from this larger-than-life beauty.

I eye the guns slung over our guides’ shoulders: loaded, and a necessary precaution, they are very rarely used, and only to scare off an approaching bear. Nothing stands between us and this wild animal but a short distance and a few rocks; polar bears are capable of running up to 40 kilometres an hour. Soon enough, the watchers become the watched, and sleepy polar bear eyes gaze back at me. A staring contest ensues. I win.

Watching the largest living land carnivore roam outside a window is a surreal sight—almost as surreal as standing within two metres of a white 450-kilogram polar bear.

Lazy and languorous, this particular bear is sleepy, sapped of energy. It’s difficult to imagine him in six months’ time traversing sheets of ice on the prowl for seals, or killing a grown walrus more than twice his weight to survive the winter. Right now, there are no kills to observe, and the sight of a polar bear walking amongst fireweed, wild raspberries, and fields of wildflowers is as halcyon as it sounds. Food is slim in the summer months, making the bears (who don’t actually enter deep hibernation, and, with the exception of pregnant females, are active year-round) more subdued.

In 2005, the polar bear was classified as “vulnerable” under the International Union for Conservation of Nature (IUCN) Red List of Threatened Species. A few years later, in 2008, the U.S. Department of the Interior officially listed the polar bear as a threatened species under the Endangered Species Act. With climate change causing disappearing sea ice, which has since resulted in a dwindling food source of seals, the looming threat of global warming is difficult to ignore. 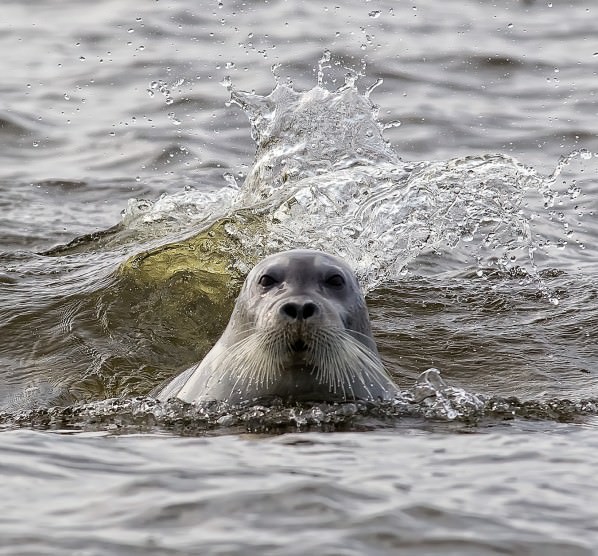 In the wilds of Manitoba, the notion of going on safari seems an unlikely activity, something best left to tiger-spotters in India or those who seek out the Big Five in Africa. There are the obvious differences—on this safari, I wear three layers of warm leggings and rain pants, and am still cold; in Kenya, a pair of shorts will often suffice—but a common feeling unites the acts of watching rare and beautiful animals in the wild. The thrill of the kill, which can graphically show the circle of life that sustains the workings of the wild, is missing on this particular trip, but the awe of the safari remains powerful.

One foggy morning, I awaken to an early morning knock on my bedroom door and a commotion outside. A night watchman stands guard over the lodge each night, eyes peeled for curious bears and Northern Lights. I’m expecting flashes of green and blue aurora borealis, but out of the main-room window is a more unexpected early morning sight: far in the rocky distance, two bears are stretched up on their hind legs, standing at least eight feet tall, their furry arms in the air like boxers, jabbing, dodging, and blocking each other, paws flailing. Their show of strength is spellbinding. I want to get closer. I walk with my guide until we come within about 15 metres; this is not a playtime I want to interrupt. The situation looks heated, until one bear abruptly drops down, his interest apparently waning. I’m anxious, craving more of this play fight, but the dust-up is over, and the duo strolls off.

My final day at the lodge is paired with a sombre spirit at the prospect of departure. Oftentimes, a promise of “I’ll be back” makes it easier to leave special places behind. I make this vow when leaving Seal River Heritage Lodge. However, the rush of glimpsing a polar in the wild for the first time will never be repeated. For my personal exodus, the breeze is calm and the sun shines. Taking off by floatplane, it’s strange to hear the engine—a sound of civilization that has been pleasantly remiss this past week. A seascape opens up beneath me, and I see the estuary where the Seal River meets the Hudson Bay. Below, grouped in small pods and looking like miniature white fish, hundreds of beluga whales dot the sparkling blue water. They appear as they surface, then quickly drop beneath the waves and disappear like ghosts. It is an appropriately surprising farewell as I take my leave of the land of the unexpected. 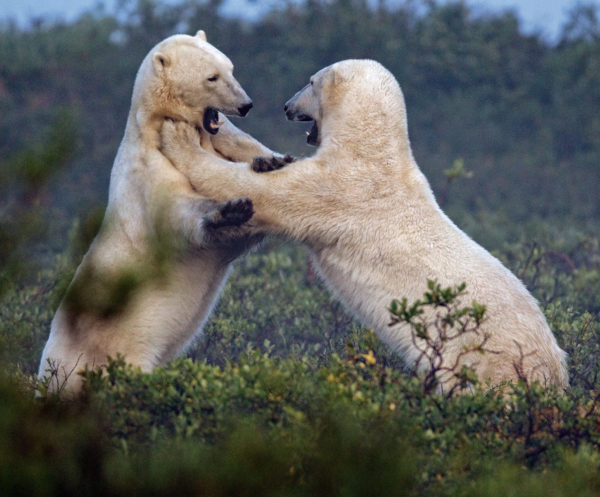 Where to Stay on the Atlantic Coast