Even in a part of the world renowned for its beauty, Borgo di Vagli stands out. Clinging to the densely wooded hills 20 minutes east of Cortona in Tuscany, the humble 14th-century hamlet has been transformed into an exquisite getaway and residence, a place of rare architectural integrity, transcendent views, and delicious food.

The driving force behind this unique project, a Turin-born architect, developer, and civil engineer named Fulvio Di Rosa, is a man on a self-imposed mission to not just restore sites such as Borgo but also to bring them back to life. Throughout the process, his emphasis is on authenticity, minimal intervention, and trying to figure out what the original builders would have done, to get into their minds and respond accordingly. Though the stone cabins that make up Borgo are state of the art in terms of safety, technology, and domestic amenities, they look and feel like something from an earlier age.

“When we arrived, only the donkeys were here,” the affable Di Rosa recalls. “The place was falling apart and completely overgrown.” The hamlet is made up of a cluster of 10 stone buildings of varying sizes, some free-standing, some interconnected. Clearly, they were built by hand, a laborious exercise of piling rock upon rock. Even the “shingles” on the roofs are slabs of slate, used pretty much as they were found. 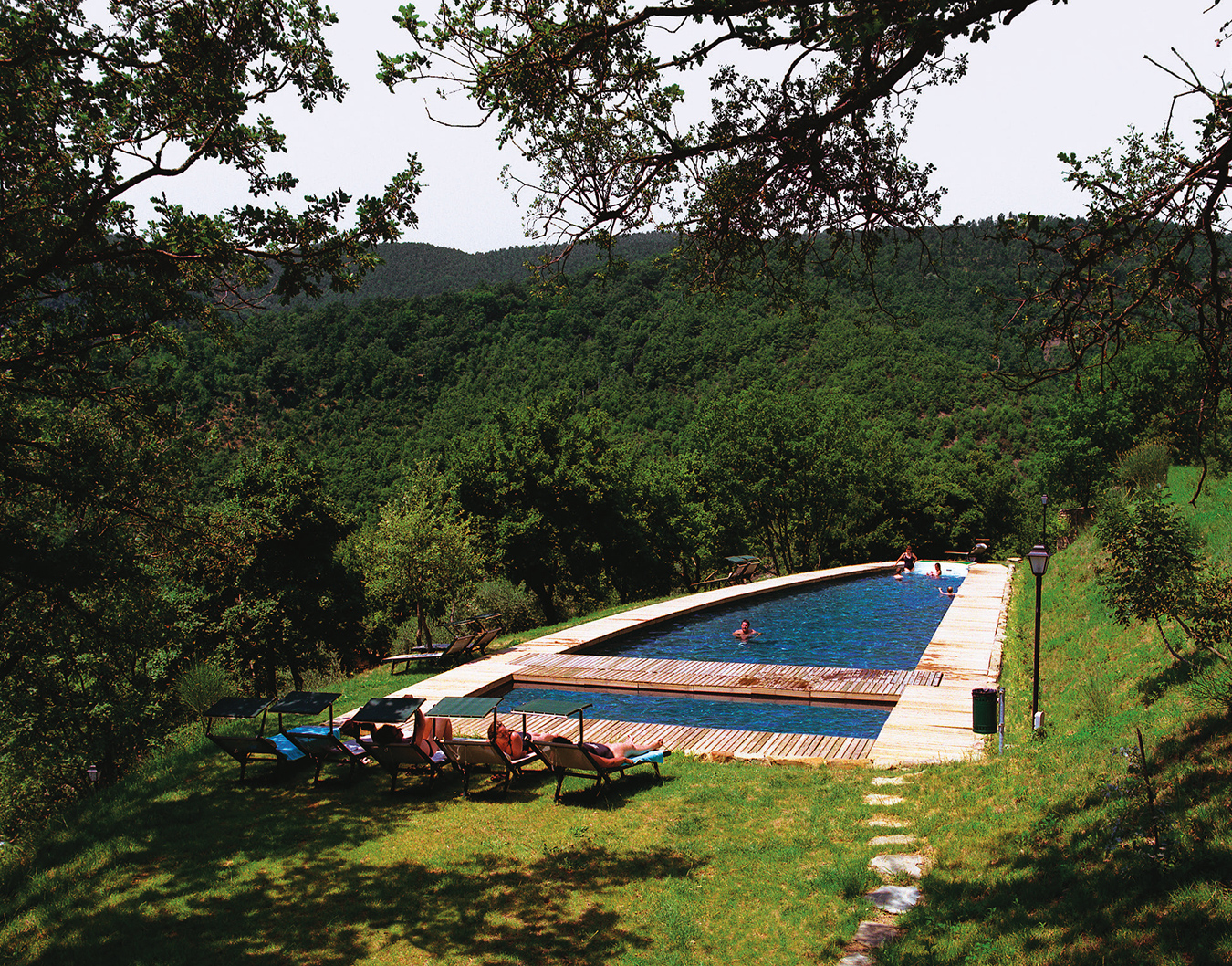 Originally, the ground floor would have been occupied by livestock—sheep and goats as well as donkeys. People lived above. Presiding over the compact community is a watch tower that reaches several storeys high. It is also made of stone and has now been transformed into a trattoria.

“The intention was to let it be as it has always been,” Di Rosa says of Borgo di Vagli, which translates as “between the valleys”. “You have to be humble. The less you recognize the architect behind the project, the better. It’s a matter of tidying up and putting things back.”

But because the intention was to restore the buildings and sell them as a fractional ownership resort, they had to be brought up to contemporary safety standards. That meant introducing earthquake and fire protection, power, insulation, and the like. The law in Tuscany is strict but understanding of the historic-building restorers’ situation.

That didn’t mitigate the need to scour the region and beyond for old wooden beams and aged stone to use in the restoration. The materials that aren’t sympathetic to Borgo’s ancient aesthetic—like the concrete beams that provide extra support—are hidden away and out of sight. The terracotta comes from nearby Siena and the plaster is a special chalk-based mix that Di Rosa insists upon.

Borgo di Vagli is a demonstration of the power of restoration. Despite having been completely remade, this once-abandoned enclave is still at one within its rugged landscape.

American author Frances Mayes, whose best-selling book Under the Tuscan Sun has sold several million copies, knows Di Rosa and Borgo well. She hired Di Rosa to renovate her 12th-century stone house in the mountains not far from Borgo. The Mayes residence bears a striking resemblance to Borgo. The same use of stone, the same roofs, the same vernacular can be seen in both. As she points out, the two sites offer an alternative to the traditional Tuscan experience. She writes in Bringing Tuscany Home:

As you leave the splendid Etruscan hilltown of Cortona, driving toward Borgo di Vagli, you quickly enter a wilder Tuscany. The groomed olive terraces surrounding the town gradually give way to a rugged landscape of chestnut and evergreen forests. You might spot a family of wild boar or, at night, a barn owl might fly above your headlights.

Though only 20 minutes from Cortona’s lively piazza life, you feel immediately a curtain of time drop between you and the hectic world. Vagli is not only secluded, it’s isolated. All the neighbours are on four legs: deer, porcupine, boar, jack rabbits, and foxes. Birdwatchers will find the exotic upupa (hoopoe) flitting among the olives. You may come to appreciate the beauty of a small black scorpion (harmless) scurrying under a rock. What you hear is silence.

Borgo is a demonstration of the power of restoration; despite having been completely remade, this once-abandoned enclave is still at one within its rugged landscape. Indeed, Borgo feels like part of the terrain. The building materials are all local—sometimes extremely local—which makes the complex organic and wholly unified.

Speaking of terrain, a few kilometres away on the other side of the valley sits the 1,000-year-old ruin of La Rocca di Pierle. The imposing castle presides over the forest to this day. Though crumbling and overgrown with vines, the ancient fortress looks like something out of a fairytale. Its presence evokes thoughts of a long-vanished world of lords and ladies, peasants and vassals. The charm of the valley and the buildings found within it lies in the deep and abiding sense of connection that binds the two. In every way, they belong to one another.

“The cultural experience you offer is more important than the number of stars you have,” says Di Rosa, who has spent several decades restoring buildings in Tuscany. Though he moved to Brazil for eight years to work for that country’s most famous—and long-lived—architect, the 102-year-old Oscar Niemeyer, he eventually returned to Italy and settled in Tuscany, where his mother was born.

But as that region has attained almost mythic status with tourists—thanks to Mayes and other writers such as John Mortimer—real estate prices have grown astronomically. As Di Rosa says, few can afford the cost of ordinary housing, let alone historic restorations, even if they could find one to buy. At some point in the late 1990s, Di Rosa realized that the only way to make the economics of property ownership feasible was some form of co-operative tenure. 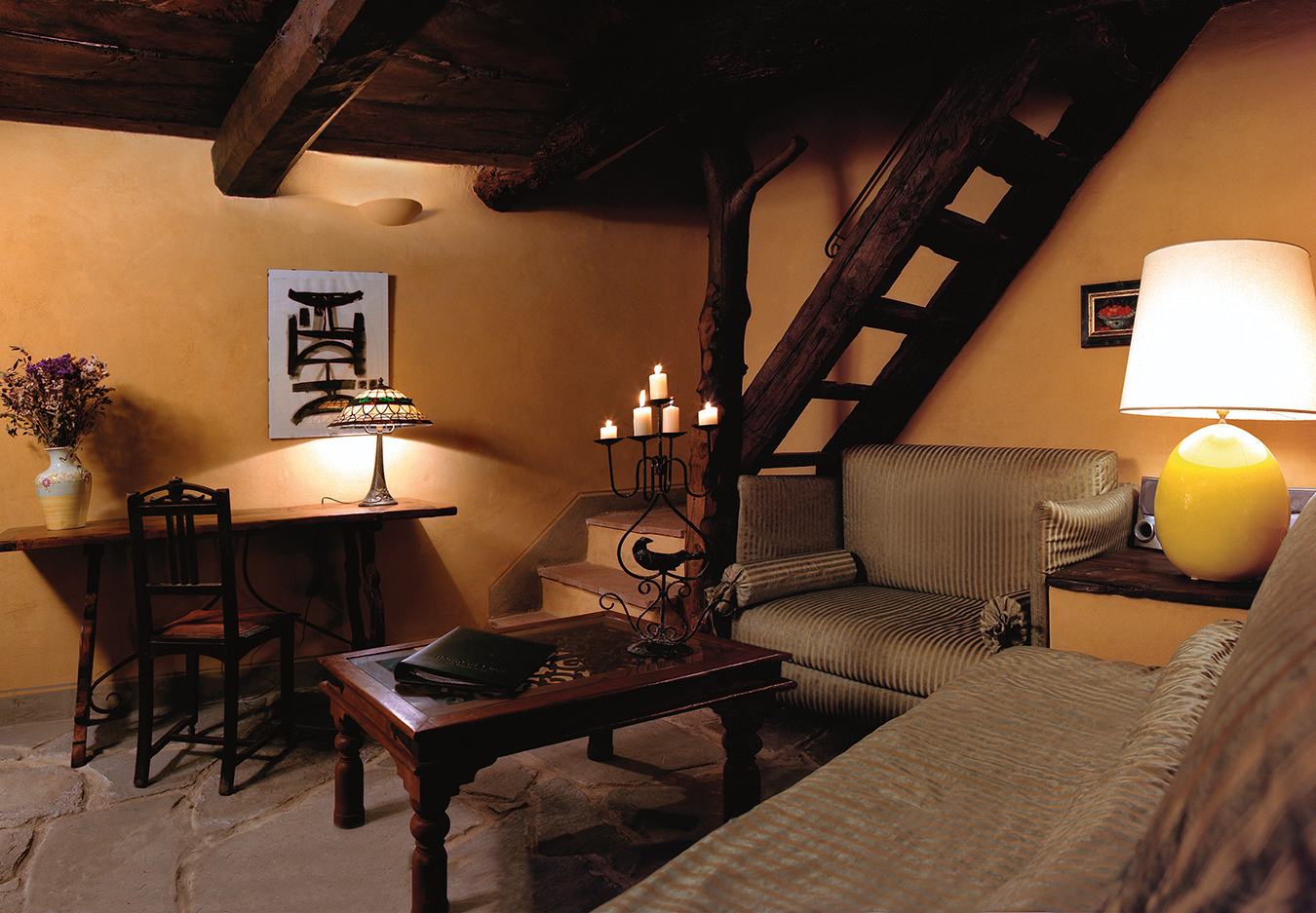 A restored room in one of the oldest parts of the hamlet.

“The price of a ruin in Tuscany is 25 times what it was in 1985 when I started [buying them],” Di Rosa says. “That’s why people can’t afford to own property here anymore—it’s so expensive.”

But rather than opt for the familiar time-sharing arrangement, he chose to establish Italy’s first fractional ownership venture. Instead of buying a given amount of time at a resort, owners acquire a share in Borgo. That comes with a guarantee of at least 21 days of use annually, but there is no limitation on the time that owners can stay.

The fractional concept was pioneered in the United States during the 1990s, and it has become popular in Europe over the past two or three years. The advantage, Di Rosa explains, is that buyers enjoy legal ownership of a piece of property, not simply the right to spend time in a building. Though most shares have been sold, a few are still available. Di Rosa’s clients come from all over the world, with a fair number from various cities in Canada.

One Canadian who has spent time at Borgo is Toronto-based heritage architect Carlos Ventin. Best known for his continuing restoration of Queen’s Park, the provincial legislative building in Toronto, Ventin has been working on the so-called Pink Palace since 1991, and has also restored many historic structures across Ontario, from small-town city halls to old libraries and courthouses. He loves what he sees at Borgo, and considers it a model project of its kind. “Borgo is at the forefront of what we should be doing in Canada,” he says. “We need a new approach—the perception here is that it’s cheaper to build new, but that’s not true. The true cost is the effect we have on the environment. Today in Canada, we are more concerned with materials and process, with building cheaper and faster. I think we’re changing—we’re beginning to realize that technology is not the answer to everything.

“Borgo is an idea. There, I feel the spirit of the place and the quality of the restoration and the workmanship that went into it. Here we complain about how expensive that is, but how much is too much to save the environment? The real comparison is the effect new construction has on the environment.” 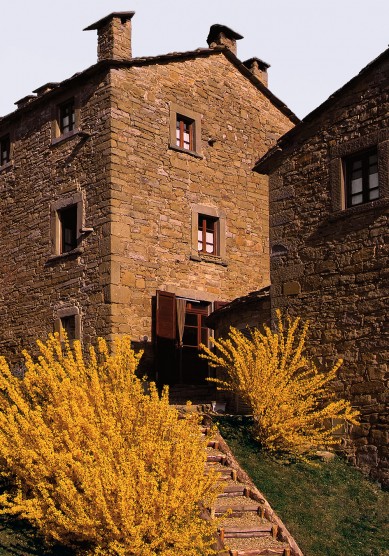 Di Rosa’s commitment to the environment, and to authenticity, underscores the remake of Borgo. These are not simply features, but the point of the exercise, both cause and effect. That’s why the term resort doesn’t quite apply; it’s more exactly what it is, an inhabited hamlet. 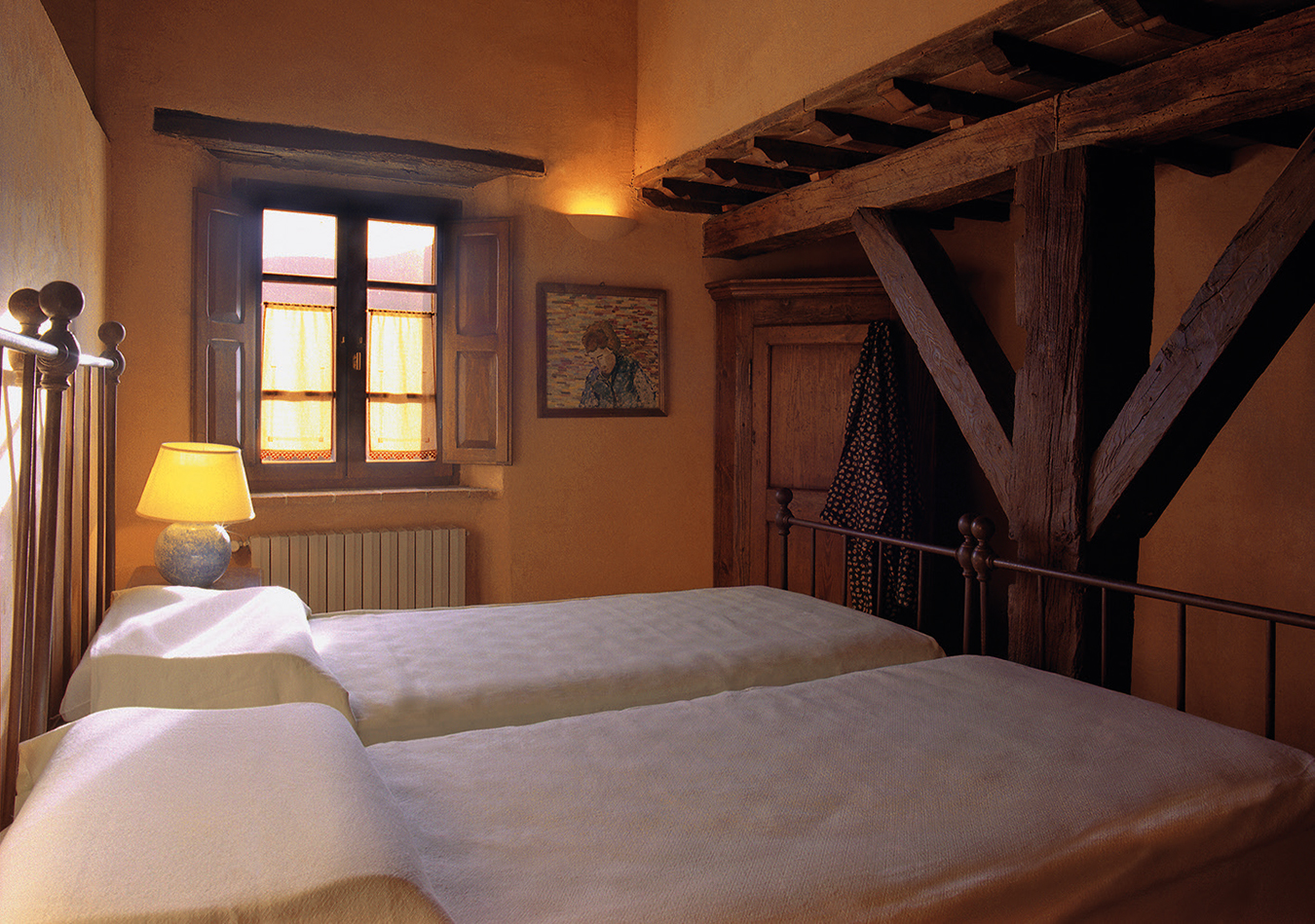 And if continuity’s important to you, consider the fact that the resident cook, Dina, was born and raised in Borgo. She lived there until the 1960s, when poverty forced her family off the land and into the city. Now she’s back, presiding over a kitchen that caters marvellously to hungry residents no matter where they come from. A highlight is pizza night, Monday, legendary among seasoned Borgonians. And then there’s Dina’s famous three-cheese pasta, which, simply put, is the best you will ever taste. She’ll be thrilled if you ask for seconds. If you’re lucky, you might be invited back for more.