The age of sound bites, of entertainment masking political opinion-making, of beauty over substance, seems so entrenched now as to be moot. What James L. Brooks was alarmed about in Broadcast News, in which the ability to shed crocodile tears while taping an interview was more important by far than being up to date on any judicial inquiry, seems almost laughably mellow now. Major newspapers are forgoing their classic “critic” positions in film, art and music, and instead allowing readers to inform themselves elsewhere, which by and large means not in reputable journals but on blogs, where opinion is worth, basically, less than the paper it is printed on.

Enter George Stroumboulopoulos, sports-radio guy turned The NewMusic VJ, although a bit reluctantly, since “reality-based TV isn’t my thing. I wanted it to be about the music, not personality.” Then, the Canadian Broadcasting Corporation came calling. And calling. And calling. They even had a name for it: The Hour. “They wanted to do something on Newsworld, to follow The National, and it just didn’t seem like a good fit to me,” says George. “I go into anything I do not wanting to just do a job, but to completely throw myself into it, and I couldn’t see how the CBC would actually want me, my style, my approach—even what I wear. It didn’t look right to me.” Whatever else George is, he is completely authentic. “What I do on the air—radio or television—is basically me being me, and when I do interviews, it is about finding the conversation that exists, the interview that is there to get. I never force anything, or come in with a preconceived notion of how it should go.” In an era of strenuous post-show analysis and boards of directors looking over every note, it is not difficult to follow his logic in concluding that he wasn’t right for the CBC.

If you tend to take this kind of thing lightly, go ahead and engage your favourite search engine and type in his name. Among the wide array of hits, you will find a note or two of protest, comments like “I don’t want George Stroumboulopoulos to be the voice of my generation.” Duh. Nor does George want that. The trouble is that far too many media personalities get far too much credit for shaping opinion—but at the same time, they have been more or less handed a tremendous amount of power over their constituents, and so, by bequeathal, they might be said to do your thinking for you, if you let them.

George stands in direct contradistinction to these phenomena, while simultaneously falling reluctant victim to it. He puts together two full shows (The Hour, as well as a radio show called The Strombo Show), drawing huge audience response, some of it more adulatory than he would prefer. Still, he does it his way, and it works well. Whether an audience has its own critical thinking cap on is something he can encourage, but not enforce. That is one of the reasons Bono murmured to him, at the end of their interview, “George, I’m a fan.” It takes a horse to know a horse. 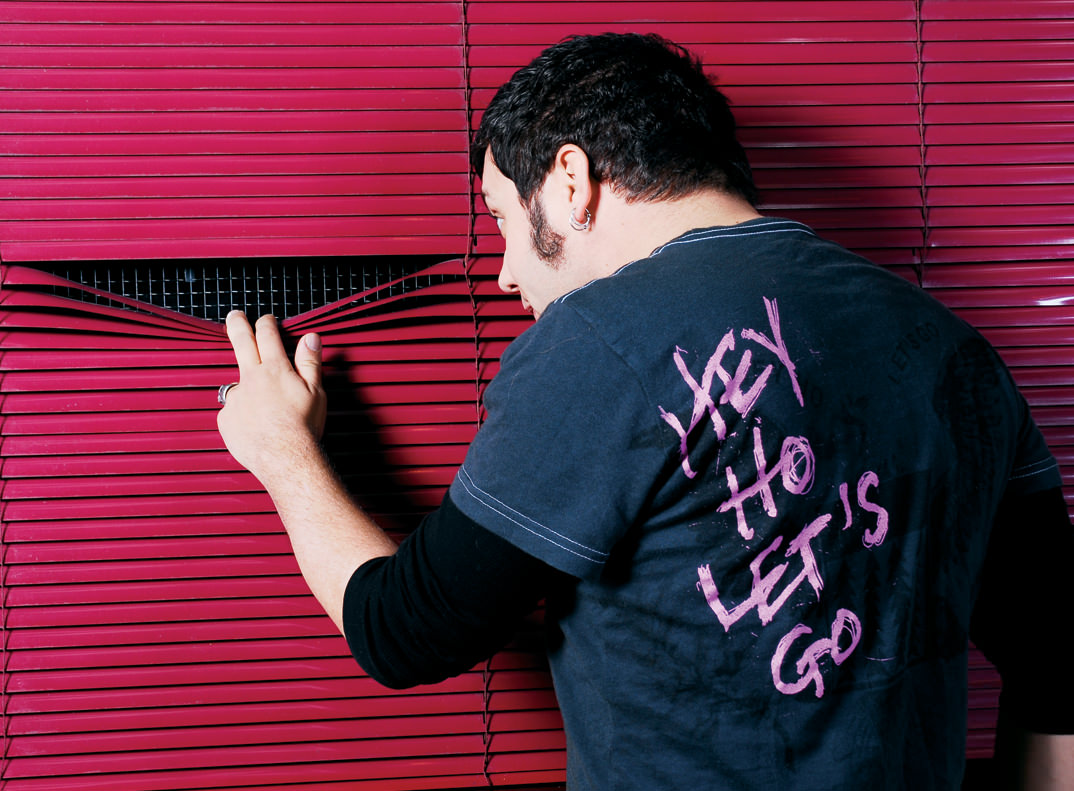 In person, George does indeed have that constantly surging, seething energy you see on the show. But it is cut, like a fine 30-year-old blended whisky and branch water, an incisive intelligence. Mix in a capacity to really listen, and there you have it. The conversation can move in many directions in very short order, as connections get made between, say, Patti Smith’s Saturday Night Live performance of “Gloria” (“An absolutely electric moment for me. She went out there, a girl, a little T-shirt, a band, and just took on the whole establishment with her intro. It was a defining moment for me.”) and Band of Horses and their anthemic “The Funeral” (“In a decade or so, some filmmaker, like a Wes Anderson, will be searching for soundtrack songs that define a time and place culturally, and he’ll find that song and say, ‘Wow, that’s it, that’s perfect.’”). It is not in any way manic, but more in the way of passion, and a total engagement with what he is doing at any given time.

What turned the tide and made him go ahead with The Hour? “To be honest, my manager, Michael Sugar, a truly nice person, who had never asked me to do anything I didn’t want to do, called and asked me to take one last meeting, with Jennifer Dettman, one of the executive producers, and the person most adamant that I was right for the job. I did the meeting, more as a favour to Michael, but about five minutes in, I looked around the room and realized, ‘Hey, this is a fantastic team setting.’ And from there I began to think about the fact that the CBC is public, both radio and TV, so it’s not like private media, where usually some cat’s got to get richer. There was no ‘targeting’ of an audience, but more like building a band, putting the components together to achieve what you all believe is the best product, and then you go out and do it.”

Protracted process thus yielded a positive result. George followed Peter Mansbridge (with whom he spoke about working at the CBC before making his commitment) as part of the CBC Newsworld package. Two years later, The Hour became part of the main CBC channel’s broadcast schedule as well, to great acclaim. “I love it,” says George. “The most common thing I hear—although we do get our share of criticism—the most common thing I hear is someone coming up and saying, ‘I watch your show with my kids. We all enjoy it.’ To me, that is a great thing—a 15- to 90-year-old demographic.” 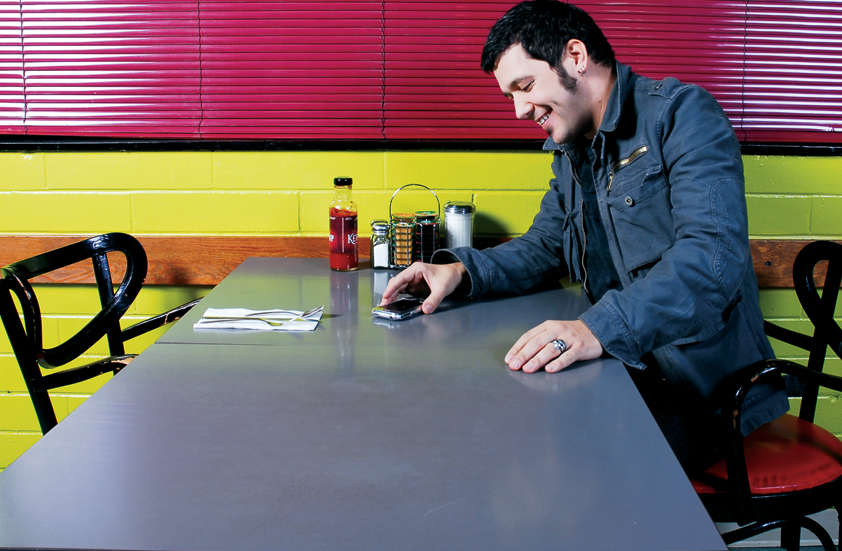 Another factor is the approach George takes to any work he does. “I know I will throw myself into it, so I need a lot of things to be right before making a commitment. To like it is not enough—I have to love it.” During an interview with Toronto Life, long-time colleague and producer Bob Mackowycz Jr. said, “People say to me, I’d love to do what George does, and I say, Are you willing to sleep on the floor of a radio station at 6 a.m. on Saturday mornings? George is talented, but talent’s not that rare. George is a workhorse. He’s a boxer. He won’t stop.”

“When I do interviews, it is about finding the conversation that exists, the interview that is there to get. I never force anything, or come in with a preconceived notion of how it should go.”

While reality television may not be his thing, being an on-air host and interviewer certainly is, though he makes it completely his own. “The first thing I did for The NewMusic was an interview with Noel Gallagher of Oasis, kind of a trial by fire. But I just asked him questions I was really curious about, and it went really well. One that was different, a different style, was Howie Mandel. I have a lot of respect for what he does. That kind of hosting job for a television show is so tough to do, and he makes it seem really easy. So we got off to a bit of a slow start because he knew all about interviews and what to expect, but as we got talking, he started to open up a little, and it was great in the end.”

There may be a hint there about what the future might have in store, but for now, The Hour continues to exceed all expectations. “I honestly thought I’d last 30 days, but I knew I’d have given it a real shot. Still, if we could pull it off—how great that is. It is a Canadian show, I can do my thing in Canada, and it is something our team is proud of.”

The studio audience is integral to the process, but perhaps not in the most obvious sense. There is absolutely no “playing” to the audience, that is, working the guest one way or another to elicit certain expected responses. Rather, “It is strictly one-on-one—I am talking with someone. The personality and the person are not separate for me. If there is a reaction, the audience laughing at a joke, or audibly making it clear something just struck a chord for them, I will take the time and let that play through. But then it is back into the conversation.” Scripted questions? Research? “Oh, absolutely, lots of research,” he says, rolling his eyes a bit. “You have to respect the people who are coming on the show, respect what they do, why they are interesting to our audience, and bring out the best conversation that is possible between us.”

On-air highlights are plentiful, and George has done stellar work in having even the more difficult or taciturn celebrities appear to be relaxed and open by the end of an interview. Rufus Wainwright, Belinda Stronach and even Bono fall into this category. “I certainly want to get more than the standard press-release information from them, and that can take some nudging.” He knows that many of his guests are in fact thoroughly coached—one might even say trained—to divulge only so much information, and even then it is highly particularized. So it is no mean feat to bring forth something fresh and engaging from them. And when something comes up that will assuredly be outside the box, he finds ways to encourage that. “Daniel Lanois wanted to sing a song, and our team discussions were all about ‘We don’t have musical performances on the show’. True, it isn’t that kind of show. But I just said, ‘Well, if Daniel Lanois wants to sing and play, I think we have to let him sing and play.’ And it was fantastic.” It is not at all difficult to get George Stroumboulopoulos on a dart into a bull’s-eye when discussing music, clearly his first love. “I still do the radio show because of music. Pure and simple.” Where does he find new music, unheralded stars of tomorrow, indie acts that run the serious risk of being overlooked? “I have a lot of music sent to me, obviously, and friends tell me about stuff, but the best for me is to check out music on my laptop, just sit there all night long, listening to independent radio stations from all over the place.” This business about “all night long” is not hyperbole. George’s stamina, energy and relatively little need for sleep are all part of his reputation for good reason. No espresso, just good old-fashioned high-octane personality. “I might have a non-caffeine energy drink once in a while,” he shrugs.

At this place and time, here, a wide-ranging discussion: about Joe Strummer of the Clash, whose voice, even in his latter days with the Mescaleros, “is the key to a door. Just special.” And about the Operation Disc Drop project: “Do a mixed tape kind of thing, download the songs legally, burn the CD and just leave it somewhere—on a bus seat, in a coffee shop, wherever. And if you find one, listen to it, and then explore the music you find on it. It is a tremendous way to spread the word about music. Just put stuff on it that makes your day, or breaks your heart, whatever.”

From here, George Stroumboulopoulos is off into the snowy night, jacket collar raised against the huge, damp flakes that are in some way manifestly making his day. What sticks, a whole lot longer than the snow, is that he is living his vocation precisely the way he would recommend anyone do it. No matter what the job, if you agree to do it, get out there and “Just wear it.” As the old pop song goes, George Stroumboulopoulos wears it well.