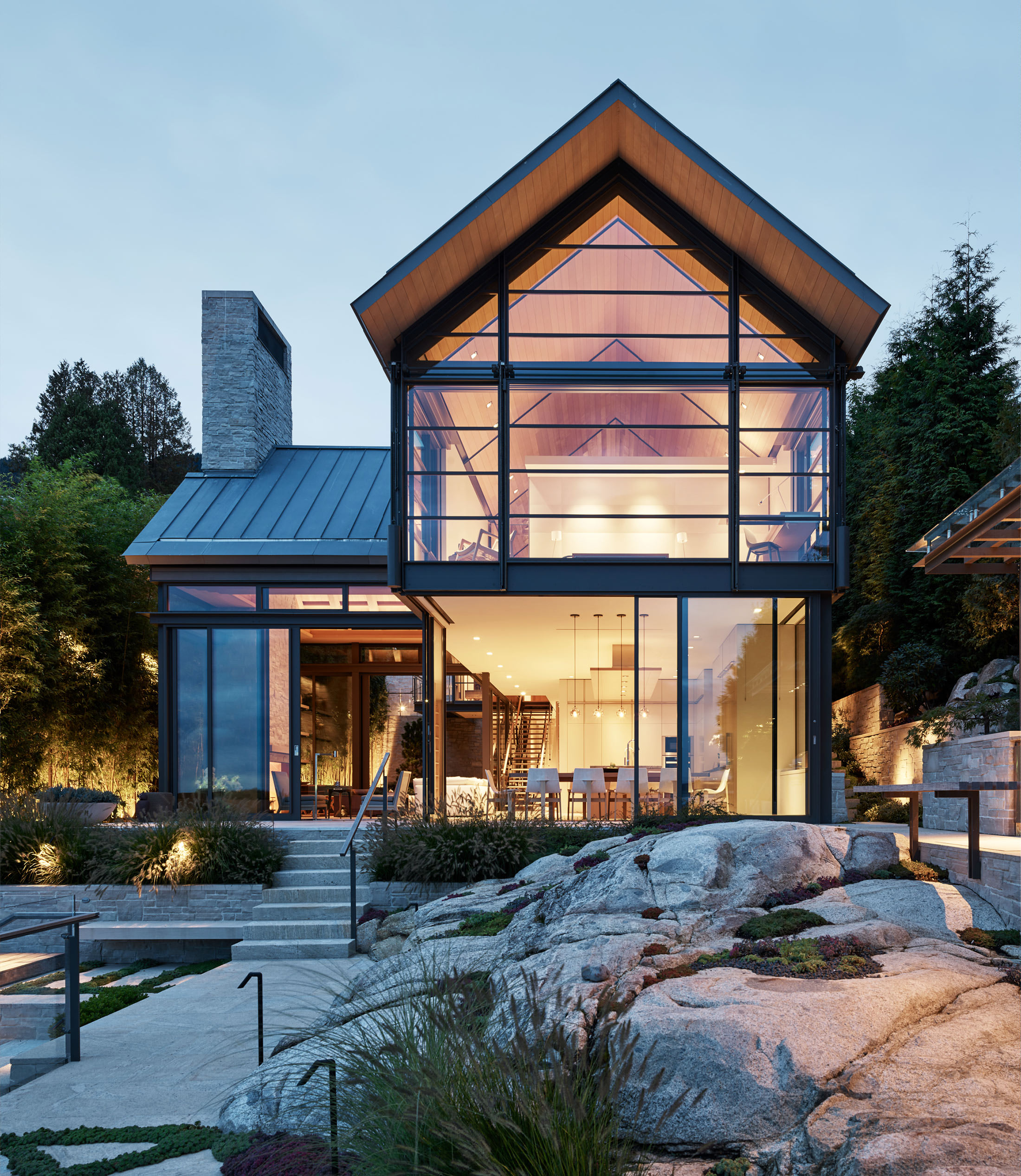 The Sea House was built to let the outside in and to feel radically close to the ocean.

Place is the primary element of architecture, but very occasionally it can become the art of architecture. This house in West Vancouver is a canvas—much like the water of the strait, which laps at its feet—on which nature paints itself over and over again through each day and night, and through the seasons.

The home was built for one of the long-time innovators of the Canadian parkland tourist industry on a shallow waterfront lot in British Columbia. Washington state–based architect, Les Eerkes, designed it while working for Olson Kundig and continued to finesse the myriad details after striking out on his own, launching an eponymous studio in 2015. Today, his practice synthesizes the traditional and the digital, people, and their places.

“We wanted [the client’s] home to be a place that invited the landscape into the daily living experience,” Eerkes says. To do this, the home splits the lot lengthwise, creating a strip of landscaping, including a courtyard, from the street to the shore on the western half, and planting interior spaces on the eastern half. Setting “the living room down in the garden,” as Eerkes describes it, created a space that gazes inward at a reflecting pool and outward to Burrard Inlet and the Strait of Georgia. Every room has a generous view of land or sea, and the living room is a “gateway” from the courtyard to the beach.

Mere metres from the ocean’s edge, the design was intended not only to draw the landscape in, but also to draw in and play with light. “For those of us who have grown up in this region, daylight is precious and all too fleeting,” says Eerkes, who was raised among the waterways and woolly forests of Whidbey Island, which marks the northern limit of Puget Sound. “In all my projects, I fret about how a space will feel, both on an overcast day and on a sunny day.” In the courtyard, the reflecting pool was a way to play with light and provide interest on days when the light is flat. 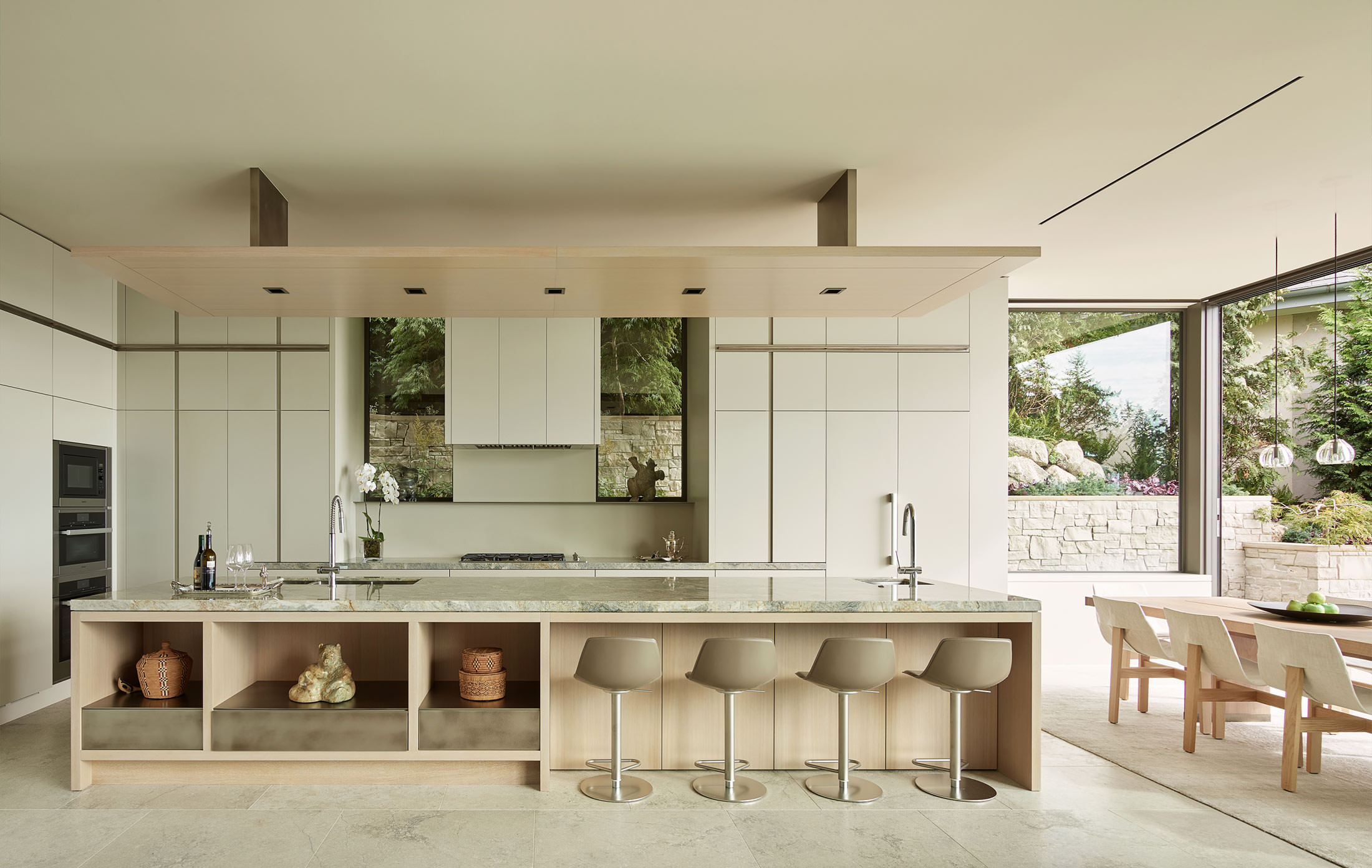 In this “modern take on an old-fashioned beach house,” as the client puts it, light became one of the most important tools in the architect’s tool box.

It was also a way to honour the multi-generational connection of the client’s family to land and sea in this area. The client was intimately involved in the design process. “She has a love of the landscape, and recognizes its power to make people feel awe and wonder,” Eerkes says, “and she strives to share that with others.”

In this “modern take on an old-fashioned beach house,” as the client puts it, light became one of the most important tools in the architect’s tool box. The rest of the materials are simple in the same way the light is elemental; they draw inspiration from the site itself. “From the beginning, we all agreed that the granite was one of the most important elements on the site. It has a presence and a sense of place that no amount of landscaping could match,” Eerkes says. “It’s interesting that so many other sites in the area violently blasted the stone away and covered it with lawn.” Instead, along the water, Eerkes and landscape designer, Randy Allworth, preserved a glacier-scoured granite outcropping, and carved terraces and paths into it using only powered hand tools. They mapped out the route by following the contours of the stone, “finding” the path and minimizing the need to alter the rock.

Almost every interior and exterior material responds to colours and textures found on the site. “We wanted all the stone to match the granite, and the wood to be bleached and light like driftwood,” Eerkes recalls, “so the rough stone cladding was inspired by the colour of the granite, the cedar siding was a match to some bark found on the beach, and the cabinets are the colour of driftwood. The stone kitchen counter draws in the colour of the ocean and reflects the light [just] like the water [does].” 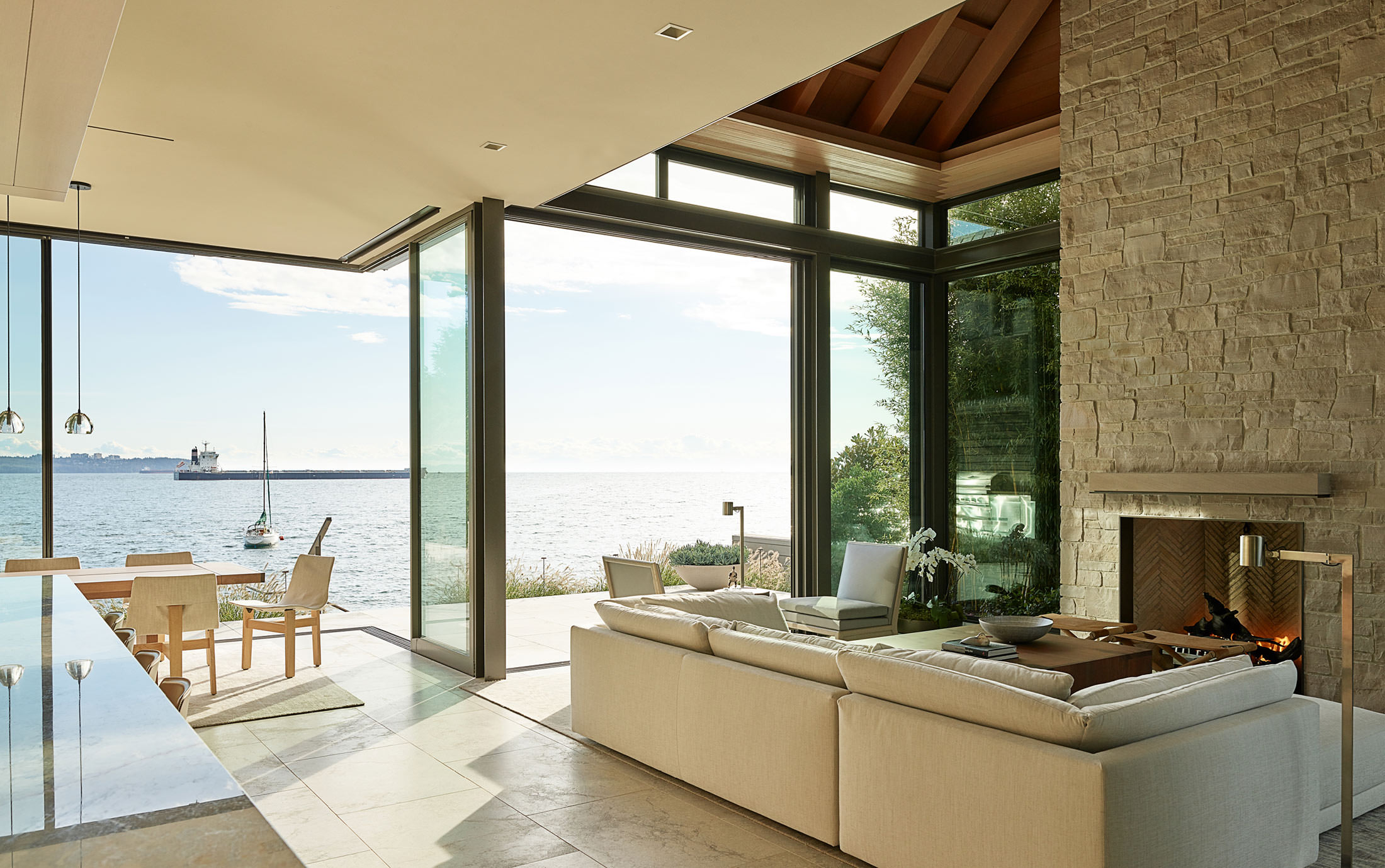 The palette makes the house a canvas for ambient light, the constantly shifting hues originating from the water and the malachite glow cast by plush foliage outside the windows.

Amidst the blond wood and warm tactility of oversize woven baskets, ceramics, and a coarse stone–clad chimney, most walls and floors are smooth and sleek. The kitchen features floor-to-ceiling flush cabinetry, with a sliding library ladder to access the highest cabinets. The staircase comprises floating black steel stairs, wooden treads, and slender metal balustrades that support large panes of glass. Part of the steeply pitched roof appears to float above the second floor interior walls, while the water-facing exterior walls are mostly glass. From inside, the views of sailboats and barges look like a series of paintings.

Eerkes designed the interiors (including bespoke furniture) with Jonathon Litchfield and Christine Burkland, to create a melody of neutral and natural shades. The palette makes the house a canvas for ambient light, the constantly shifting hues originating from the water and the malachite glow cast by plush foliage outside the windows. “The interior is a very pale grey. It almost disappears. The whole house is built to let the outside in,” says the client. “I wanted to feel radically close to the ocean, to have no distinction between indoors and out.” 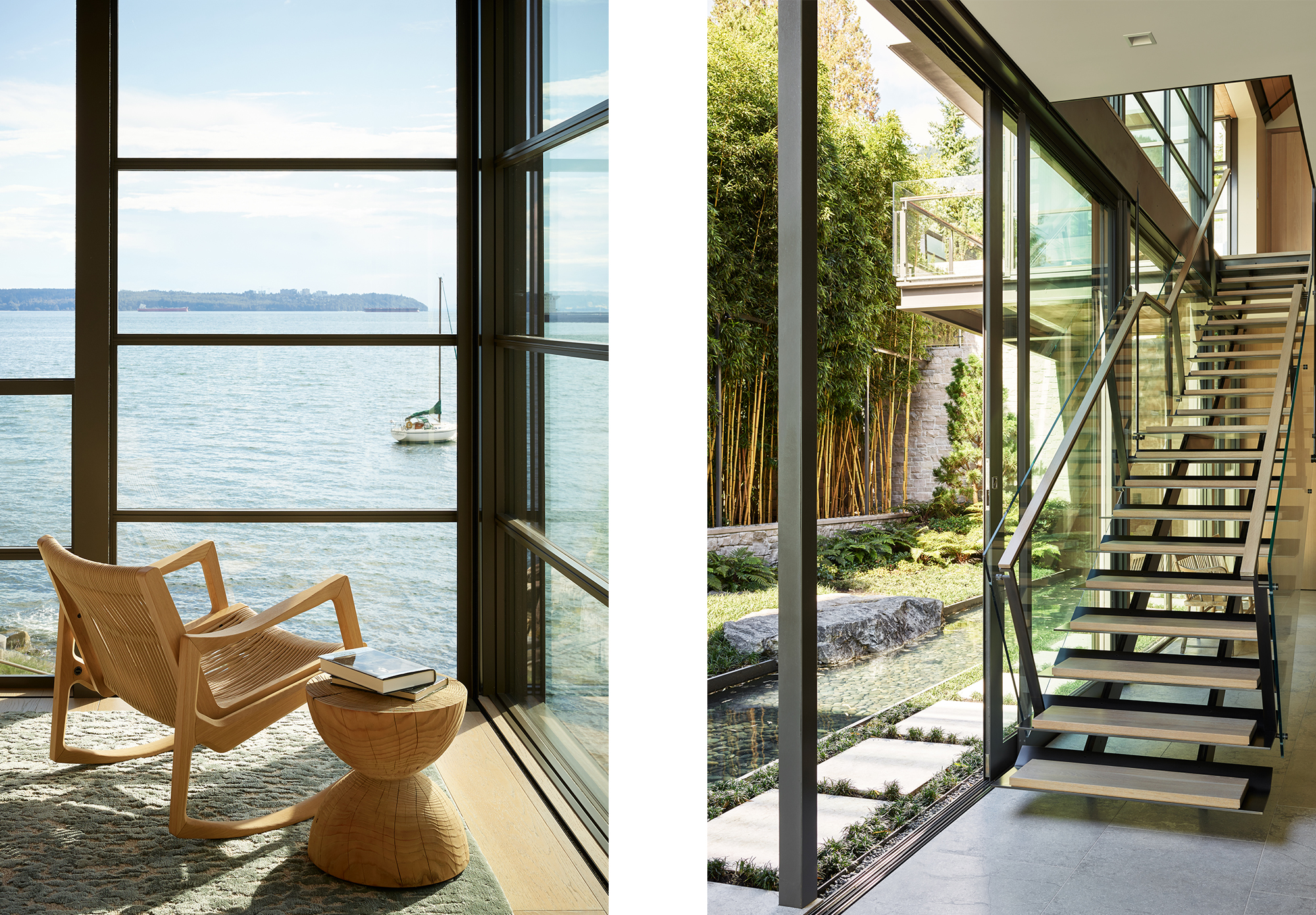 The whole house is built to let the outside in. 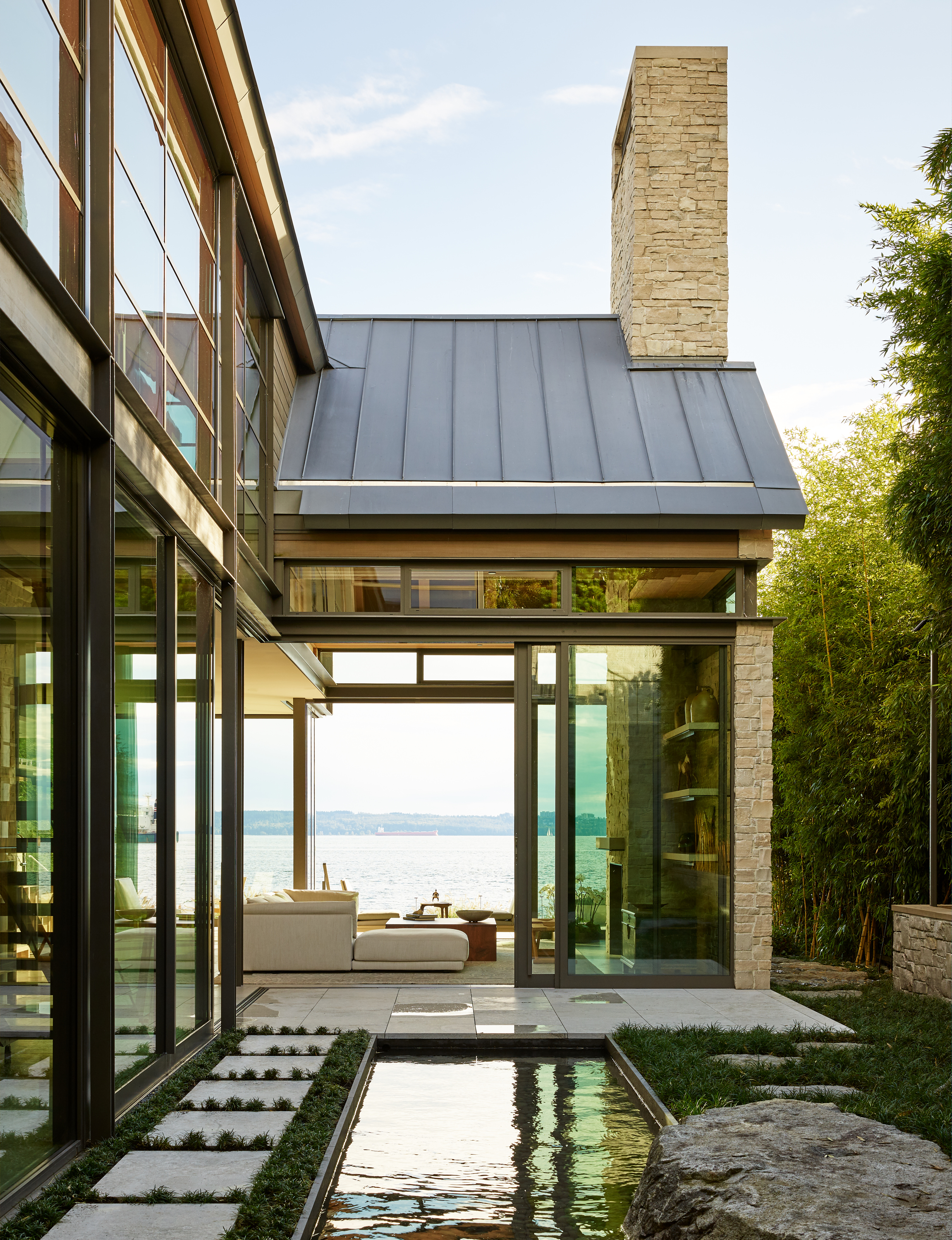 While the water-facing exterior walls are mostly glass. From inside, the views of sailboats and barges look like a series of paintings.

Stay in This Modern Hobbit Home in a Swiss Hillside