“Emotional. Creative. Free.” These are the words that Priscilla Royer, 36, offers to describe Maison Michel, the luxury hat and head accessory company where she has been creative director since 2015. They might also describe the forthright Parisienne, who says without hesitation: “I don’t like being put in a box.” Royer didn’t grow up dreaming of working in millinery, but when opportunity came knocking, she was grateful. “My parents told me if I work in the artistic field, ‘You have to be really good. It’s a hard path. It’s harder than any other one.’ There was a lot of pressure on me. So, I thought if I get money out of something I like doing, I’m lucky.” Almost five years into her high-profile gig, Royer is proof that if the hat fits, you should wear it.

Maison Michel was created in 1936 when hat maker Auguste Michel opened his atelier in a little house at 65 rue Sainte-Anne, in Paris’ 2nd arrondissement. Today, Maison Michel is an international cult favourite amongst the fashion elite. A subtle, simple M (sometimes two) stitched into the grosgrain ribbon of a hat elevates the wearer into a league of exceptional taste.

Royer’s English is fluent, save for a random word block, “How do you say désacraliser le chapeau?” One of her missions is to make hats more of a casual item, not just reserved for special occasions. Other famous milliners (think Philip Treacy) might cultivate the aspect of “precious” or “artful” with Royal-worthy fascinators, but Royer’s vibe is more city hat, the everyday hat. In contrast to an eccentric “look at me” approach, the Maison Michel philosophy is more “I am me.” Which, in a low-key, elegant sense, is very French, and very true to Royer’s own personal style.

At 10 a.m. on a Friday, Royer is in the conference room, alert and smiling. The Maison Michel atelier has for the past four years been situated in Aubervilliers, a suburb that piggybacks Paris’ northeast shoulder. Royer makes the one-hour commute to work on her electric bike. Petite and devoid of makeup, she bears the freshly scrubbed allure of French actress Mélanie Thierry or a young Kate Moss. Topping her gamine charm is a blonde bob in such an exquisite bed-head state, it almost begs for a hat to frame it. 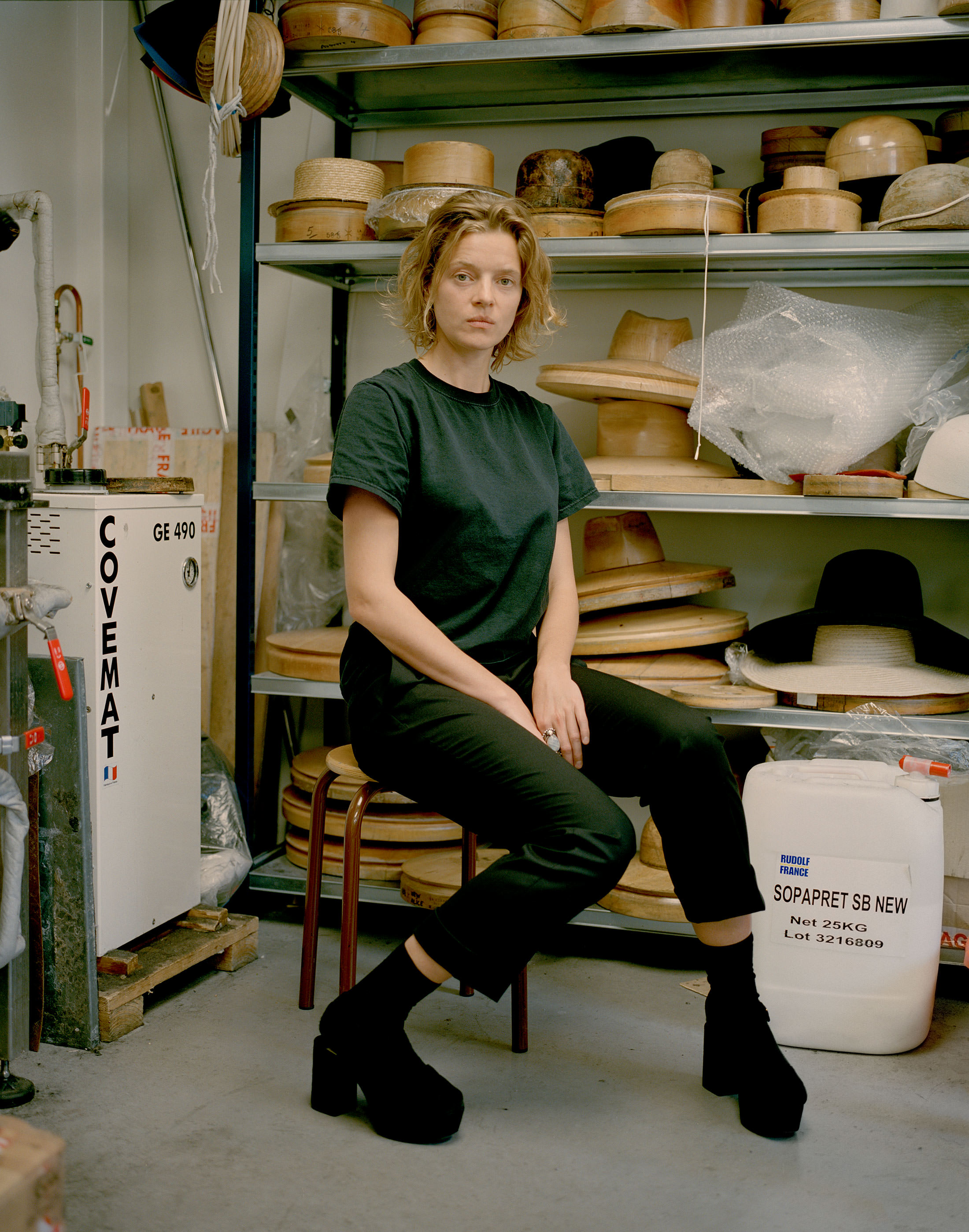 Royer was born in the French countryside. Papa Royer is a farmer. Maman Royer stayed at home to raise the family’s four daughters; she was a fan of the American soap opera Santa Barbara and liked the rhythm of trisyllabic names ending with “ah”: Deborah, Priscilla, Jessica, Agatha. The young Priscilla’s first sartorial project was the repurposing of a sock into a dress—and a hat—for her doll. As a teen, Royer had a photography darkroom. She also dipped her toe in graphic arts and interior architecture, but she redirected herself into fashion, feeling the need “to connect with fabric.” After she graduated from Studio Berçot, a prestigious private fashion school in Paris, she went to London, where by day she worked in sales at the showroom for Vivienne Westwood, pioneer punk extraordinaire. By night, she studied fashion at Central Saint Martins. But don’t peg Royer as a CSM graduate. “I only took two courses,” she says. She worked her way up the ladder and within months, she was designing Westwood’s little sister line Red Label, which shows at London Fashion Week.

Eventually, Royer returned to Paris, and with her sibling, Deborah, and a friend founded Pièce d’Anarchive. The knitwear label, barely out of its infancy stage, garnered the illustrious Andam award in 2012, granting the trio 60,000 euros. Unfortunately, Pièce d’Anarchive continued for only a few seasons. In its wake, Royer got the call from Maison Michel. “I wasn’t trained in hat making, but I had collaborated with them in the past to manufacture hats for my own collection.”

Royer has her own interpretation of the Maison Michel aesthetic and a graphic sensibility motivates her design process. “For me, it starts with a silhouette, which is always the blueprint,” she says. The look for fall/winter 2019 cuts powerful lines, embracing a gangster theme. Royer is quick to add that she “includes the gangster’s wife.” Frank Sinatra, no stranger to mafia life, once quipped, “Cock your hat—angles are attitude.” In contrast, spring/summer 2020 will be an “ode to femininity” with softer, looser lines.

Royer’s own silhouette is categorically ambiguous. Her faded black ensemble unites baggy basketball shorts that flap at her knees with a basic tee. Her bare shins are grounded by a pair of Doc Martens. Two silver armour rings accent the tomboy chic look. One on each index finger, they underscore everything she points at. She motions to the opposite wall, where images from The Mad Hatted campaign hang. Shot by young street photographer Dexter Navy—famous for his Grammy-nominated work with rapper A$AP Rocky—the collage of “real people” portraits depicts an eclectic posse, fierce from hat to toe.

Maison Michel is an international cult favourite amongst the fashion elite. A subtle, simple M (sometimes two) stitched into the grosgrain ribbon of a hat elevates the wearer into a league of exceptional taste.

It was a different world when Maison Michel was established some 80-plus years ago, to create bespoke hats for the upper class. When the house shifted hands to Pierre and Claudine Debard in 1968, haute couture relationships were cultivated. The husband and wife team are also noted for bringing back the Weismann, an antique sewing machine capable of invisible stitching. This technique allowed for wide, billowing, brimmed hats known as capelines. Then, explains Royer, a new wave rolled in: “Prêt-à-porter. And in the 1970s, hair was more fashionable than hats. Hairstylists were on the market. The social codes on hats ended. It was during this period that Maison Michel bought the hat archives from closing businesses.” Pointing to shelves containing over 4,000 antique wooden hat moulds naturally glossed in a golden patina, Royer recounts, “In order to survive, they worked with luxury houses for fashion shows and private clients.”

In 1997, Chanel brought Maison Michel under its Métiers d’Art wing, including it in a family of struggling or orphaned ateliers with the simple goal of continuity. Grouped under the umbrella Paraffection (which loosely translates as “for the love of”), the haute couture circle of shoemakers, goldsmiths, pleaters, and button makers includes many trusted collaborators of Gabrielle “Coco” Chanel, such as Lesage, an embroidery atelier founded in 1924, and Massaro, a bespoke shoemaker founded in 1894. The charm of Paraffection is that the artisans maintain their autonomy; Chanel is a client, albeit the most important one. In the case of Maison Michel, Royer designs the eponymous collections (there are four every year), which sell at high-end retailers worldwide, as well as at Maison Michel’s two namesake boutiques, in Paris and London. 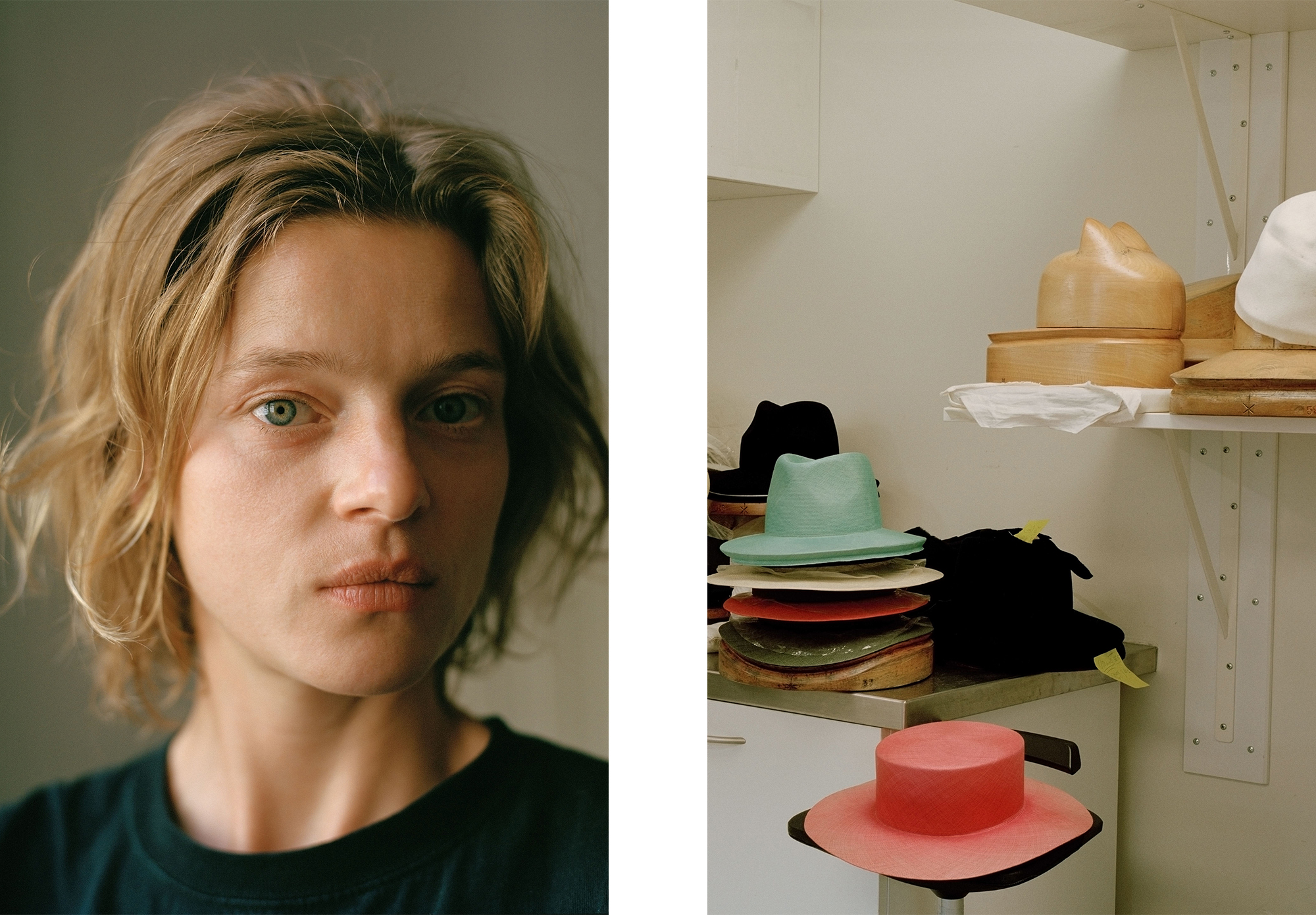 Inside the Maison Michel atelier in Aubervilliers, a suburb of Paris, where Priscilla Royer (left) is creative director of the Chanel-owned label.

Royer succeeds Laëtitia Crahay, formerly at Chanel as accessories director and appointed to Maison Michel to spearhead the namesake label in 2006. The late Karl Lagerfeld—then artistic director at Chanel and a fairy godfather of sorts (Royer describes him as “Yesterday. Today. Tomorrow”)—was known to create capsule collections for Maison Michel. Royer had big shoes to fill when she took the reins at Maison Michel for the fall/winter 2015 collection. With her own youth to inspire her, the designer exhibits confidence and calm, two traits that she respected in Westwood during her time in London.

And while several employees at Maison Michel have over 30 years of experience under their belts, “We interact as a team,” says Royer. Shariff Hisaund, a hat maker whom Royer considers the “memory” or “brain” of the company, still works on one hat at a time, employing goliath ovens, vintage steam machines, and medieval-looking irons. “Many of the people working here have been here much longer than I have. I have learned a lot from them. But it is my duty to push the boundaries.”

Priscilla Royer has her own interpretation of the Maison Michel aesthetic and a graphic sensibility motivates her design process. One of her missions is to make hats more of a casual item, not just reserved for special occasions.

The bestselling Maison Michel hat is the Virginie, a unisex fedora distinguished by an asymmetrical crescent moon dimple in the crown. And while Royer is respectful of the classics, she devotes her time to reviving the form. The iconic boater hat, for example, was widened around the brim because she deemed it “too young”. It couldn’t go too wide because then it would look “too Argentinian”. She wanted a look that didn’t have any connotations, something more universal. “The Maison Michel brand speaks to more than one archetype,” she says. And this is her clientele—everyone.

Last year, Royer launched the Hat on the Go. The novelty of it cleared a new direction for Maison Michel. An age-old conundrum was addressed. “It really bothered me that when you travel, your hat is a nuisance. You have to carry it because it’s too fragile to pack.” Royer’s innovation features special straw that can be folded and, thus, tucked away in your handbag. The decorative ribbon doubles as a tie to keep the hat rolled. This past June Maison Michel launched Felt on the Go, a felt version of the same concept. And she’s not finished. Royer seems poised to change the paradigm of hats. “Why not bring a hat in your bag instead of an umbrella?” she asks. A third season of On the Go hats is in the works.

When testing new designs, Royer’s own head is her most trusted reference, and she admits to having thousands of selfies on her phone—though she doesn’t have a personal Instagram account. “I need to see the hat on a living person to see if it works,” she explains. “When choosing a hat, you have to look at yourself properly—in the eyes.” Royer, who admits to owning over 50 hats (all kept in their boxes), recommends trying on several hats “really quickly” when shopping to find the one that feels right. “If you feel a hat is going to look ridiculous, it will.” 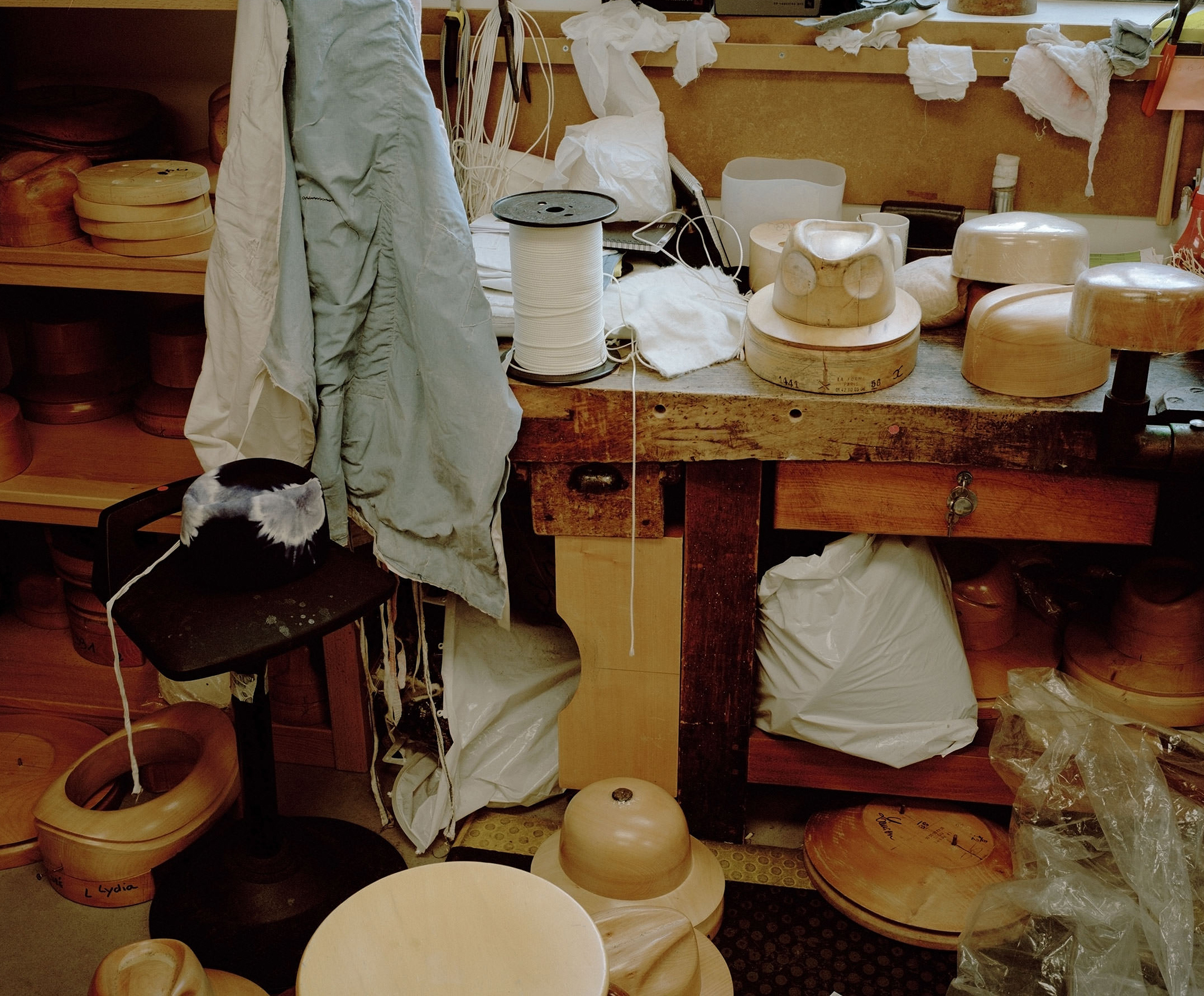 Maison Michel was created in 1936 when hat maker Auguste Michel opened his atelier in a little house at 65 rue Sainte-Anne, in Paris’ 2nd arrondissement.

Skin Care That Protects Against Pollution