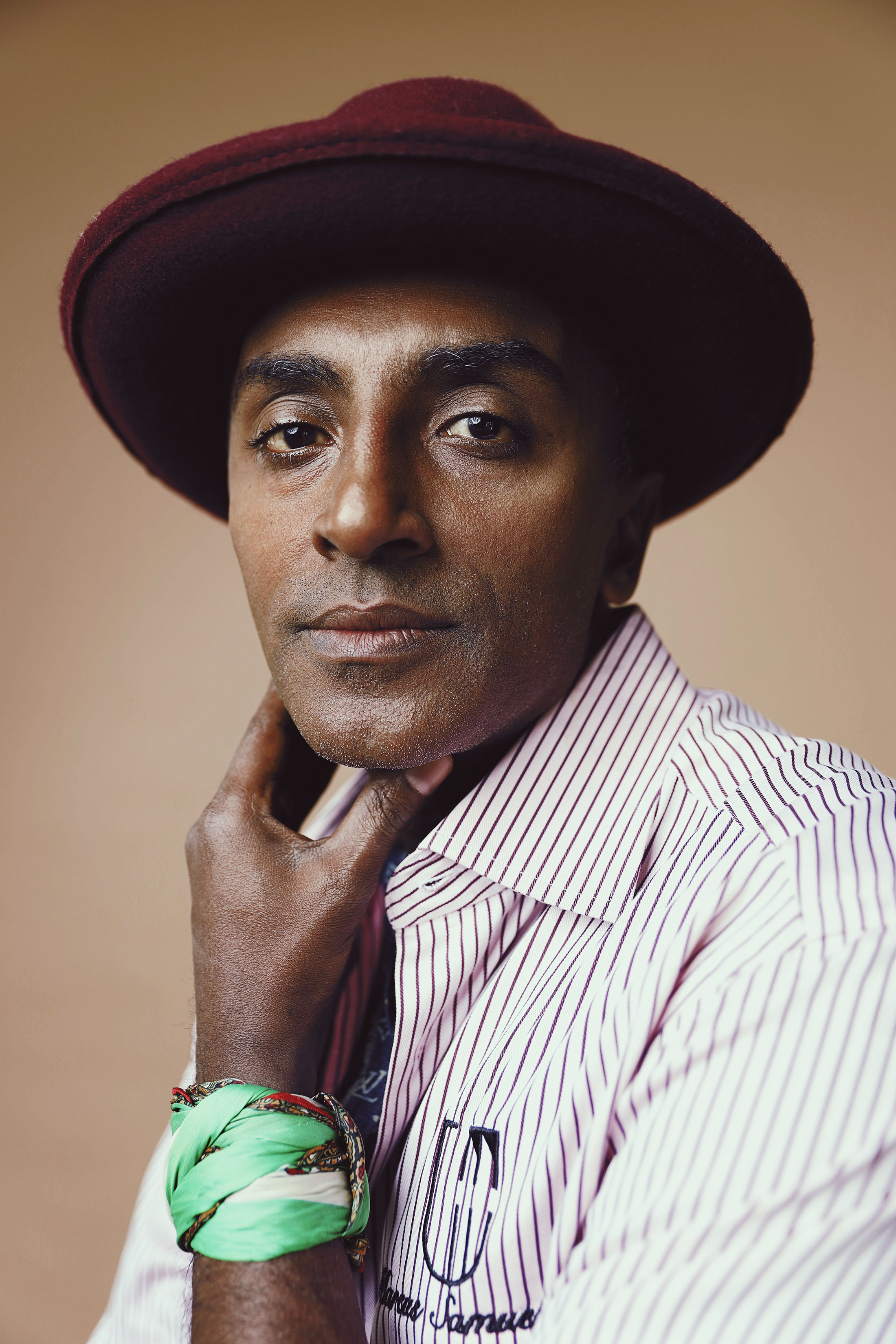 It’s been 25 years since Montreal had a Four Seasons Hotel to call its own, so when news hit that one would open in 2019, excitement was palpable. The foodie buzz was especially strong, as a search was underway for a star chef to head the hotel’s restaurant. Getting (and keeping) someone good would be no mean feat for two reasons: first, because of La Belle Province’s strong culinary culture, big-name chefs from elsewhere don’t always fly here. Gordon Ramsay left just over a year of the launch of his Montreal eatery, and when L’Atelier de Joël Robuchon opened in the Montreal Casino, questions arose as to whether we really needed to import talent when the city has so many famous homegrown chefs. Daniel Boulud has done well with the Ritz-Carlton’s Maison Boulud because he skillfully integrated himself into the local chef community, instead of arriving and telling everyone how things should be done.

Another challenge was the venue itself: hotel restaurants are about as popular here as the Boston Bruins or Toronto Maple Leafs. Save for Boulud’s restaurant and Renoir at the Sofitel, Montreal’s hotel restaurants are viewed as more of a formality than any kind of serious dining destination. Yet the new Four Seasons has taken up the challenge, not only opening one of the swankiest dining rooms Montreal has ever seen, but with the choice of Marcus Samuelsson, hiring a chef who’s sure to offer something new to the seen-it-all Montreal restaurant-goer.

Samuelsson and the Four Seasons crew have spent some two years working on the restaurant and adjacent bar-lounge that bears his name, Marcus. The interior design of the hotel was overseen by Montreal-based Atelier Zébulon Perron, and the dining room is sure to draw oohs and aahs upon entry. But the biggest standout feature is the terrace which has retractable panels that can be opened to offer stunning views of downtown Montreal. 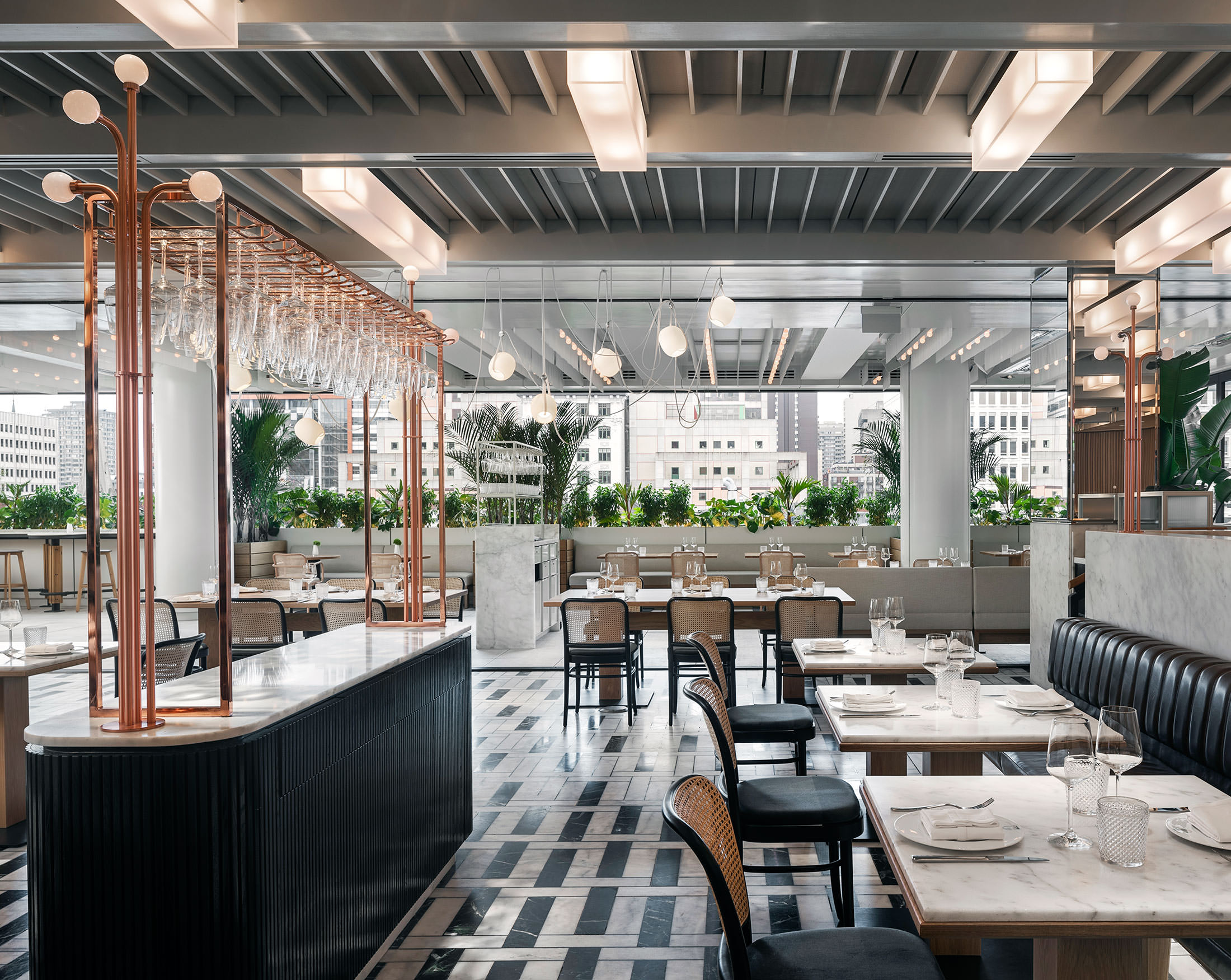 The dining room at Marcus in the new Four Seasons Hotel Montreal. Photo by Don Riddle.

And what will that meal consist of? In late May, the week the restaurant opened, the 48-year-old chef still appears to be tinkering with his menu. Asked for one word to describe it, Samuelsson replies seafood. “We will be serving 80 per cent seafood, 10 per cent meat, 10 per cent vegetables,” he adds, “with an emphasis on sustainability and health. I want to present a version—a light version—of that.” As for the style of dining, “That big open kitchen is about having a connectivity with the chefs. And in the dining room, I want people coming here for different occasions. I want someone in a jacket sitting next to someone in a T-shirt. Everyone is welcome.”

Considering the difficulty of sliding into an already established chef’s scene, I wonder if Samuelsson is feeling welcome. “I have a lot of experience with assimilation,” says the New York–based chef, who was born in Ethiopia, raised in Sweden, and moved to the United States in 1994. “There’s a lot of humility understanding a new place. It’s about gaining knowledge, understanding the culture and the soul of this city. A city has to speak to me, and Montreal does. This is a real place for me, with real memories. I have family in the city. I’ve known the core chefs for a long time, and I’ve met amazing people. I have a connection to Montreal, and that matters.”

Samuelsson’s style combines international influences with traditional cuisines from Sweden, as well as Africa, Japan, and the neighbourhood he now calls home, Harlem. His famous Harlem restaurant, Red Rooster, serves soul food classics like fried chicken (is anyone making better?), shrimp and grits, mac & greens (macaroni and cheese made with collard greens), and Bourbon-glazed short ribs. But in Montreal, his menu pulls more towards the Scandinavian influences in his cooking, with which he first made his name in the mid ’90s at the restaurant Aquavit, becoming the youngest chef to be awarded a highly coveted three-star review in The New York Times. In that review, he was lauded for “walking a tightrope between Swedish tradition and modern taste.” Sounds a lot like what he’s doing at Marcus.

For the chef, it’s a logical move. “In understanding how and what to cook here, it helped me more to be Scandinavian than a New Yorker on two levels. The climates are similar, which explains this love for root vegetables, hunting, and nature. And as for techniques, there is pickling, preserving, and smoking. It’s a privilege to have this energy of pushing back and forth between two worlds.” 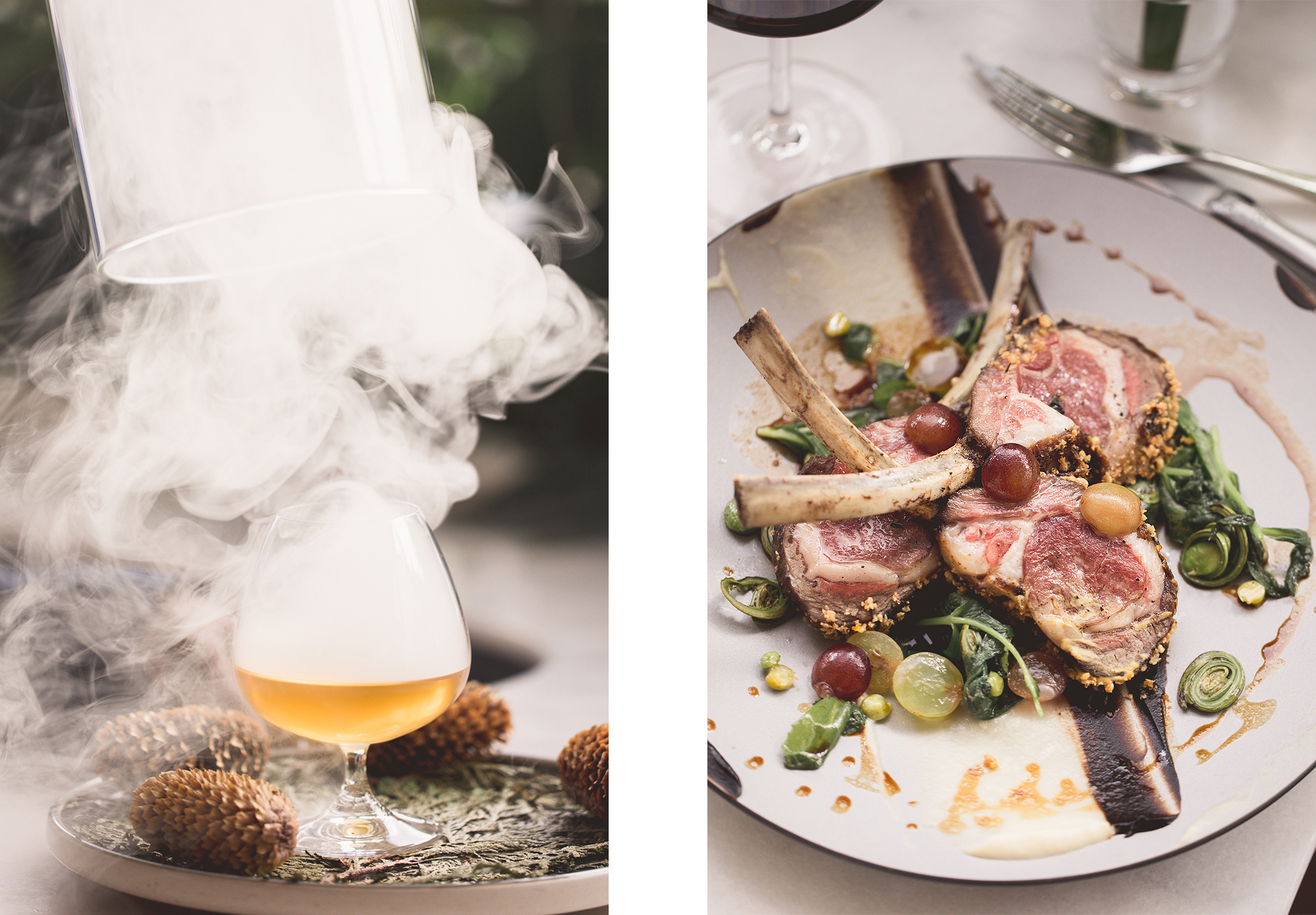 As for the increasingly popular locavore cooking philosophy, Samuelsson is not ready to narrow his focus completely to using only local ingredients, favouring instead “seasonality and deliciousness”. His style is epitomized by a dish we taste together, featuring scallops with hibiscus. “The scallops are local,” he says, “from here in Quebec. The hibiscus is African, and the way they were cured is Scandinavian. There are many ways to have a dialogue with food.”

Though Samuelsson’s home base is Manhattan, his Marcus Samuelsson Group includes 12 restaurants from Bermuda to London, New Jersey to Sweden. Now with a Montreal restaurant in the portfolio, the chef’s itinerary has become that much more crowded. So how often does he plan to make an appearance in his Montreal kitchen? As of May 22, he has been to the restaurant four times—and that’s before it’s even open. “I’m here because I’m not a fool,” he says. “I know how a chef’s presence adds value, but I also want to learn, build knowledge, and build a team. Cooking isn’t part of my life. It’s the only thing I’ve ever done. It’s not a job, it’s who I am. Before I had a car, I had a catering company. I’ve committed my whole life to food.”

Before departing, I have to ask Samuelsson one last burning question: Will his new restaurant be serving poutine, the classic Québécois dish? “No poutine on the menu,” he answers with a laugh. “We haven’t earned that right yet. But,” he says, suddenly serious, “maybe next year.” 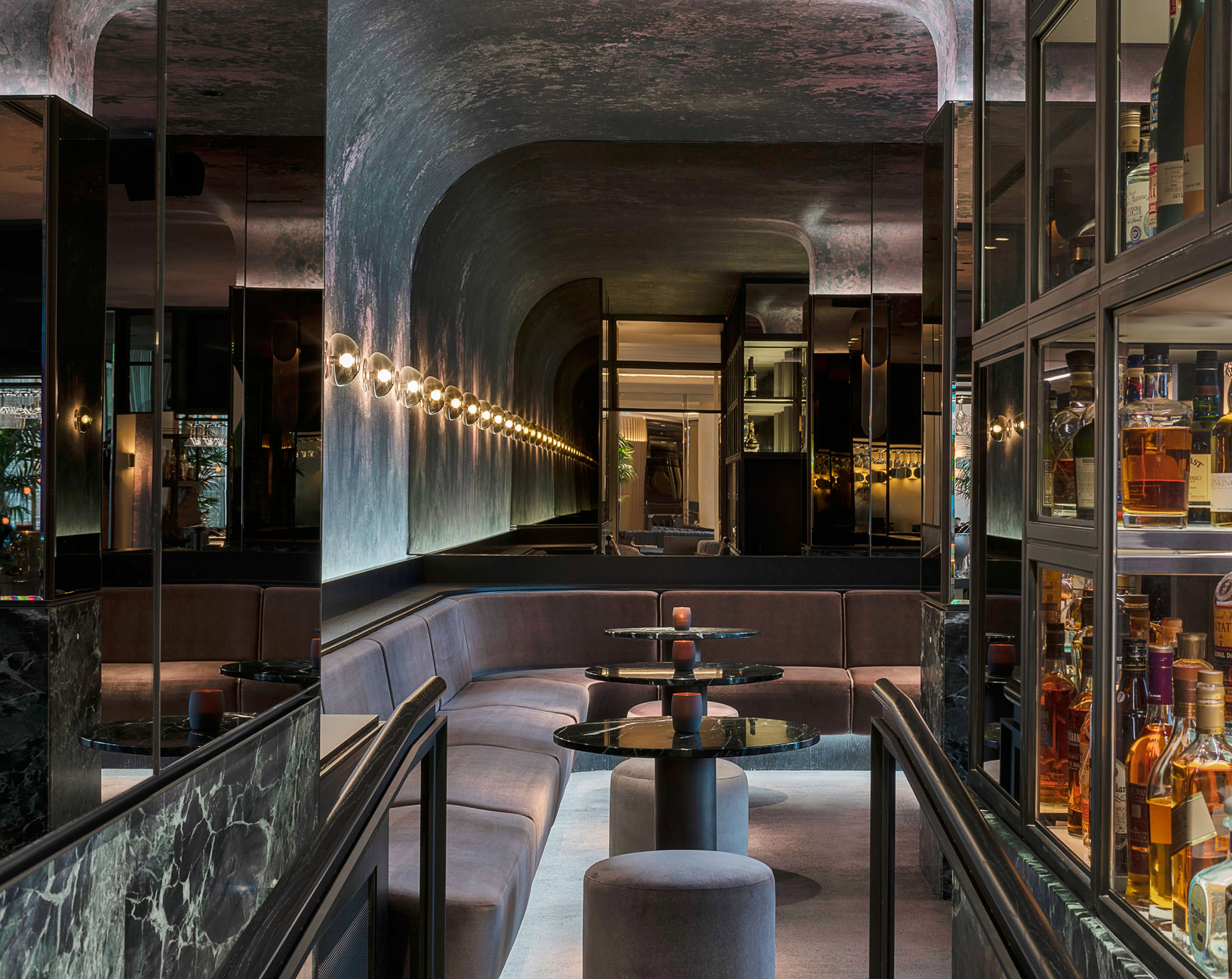