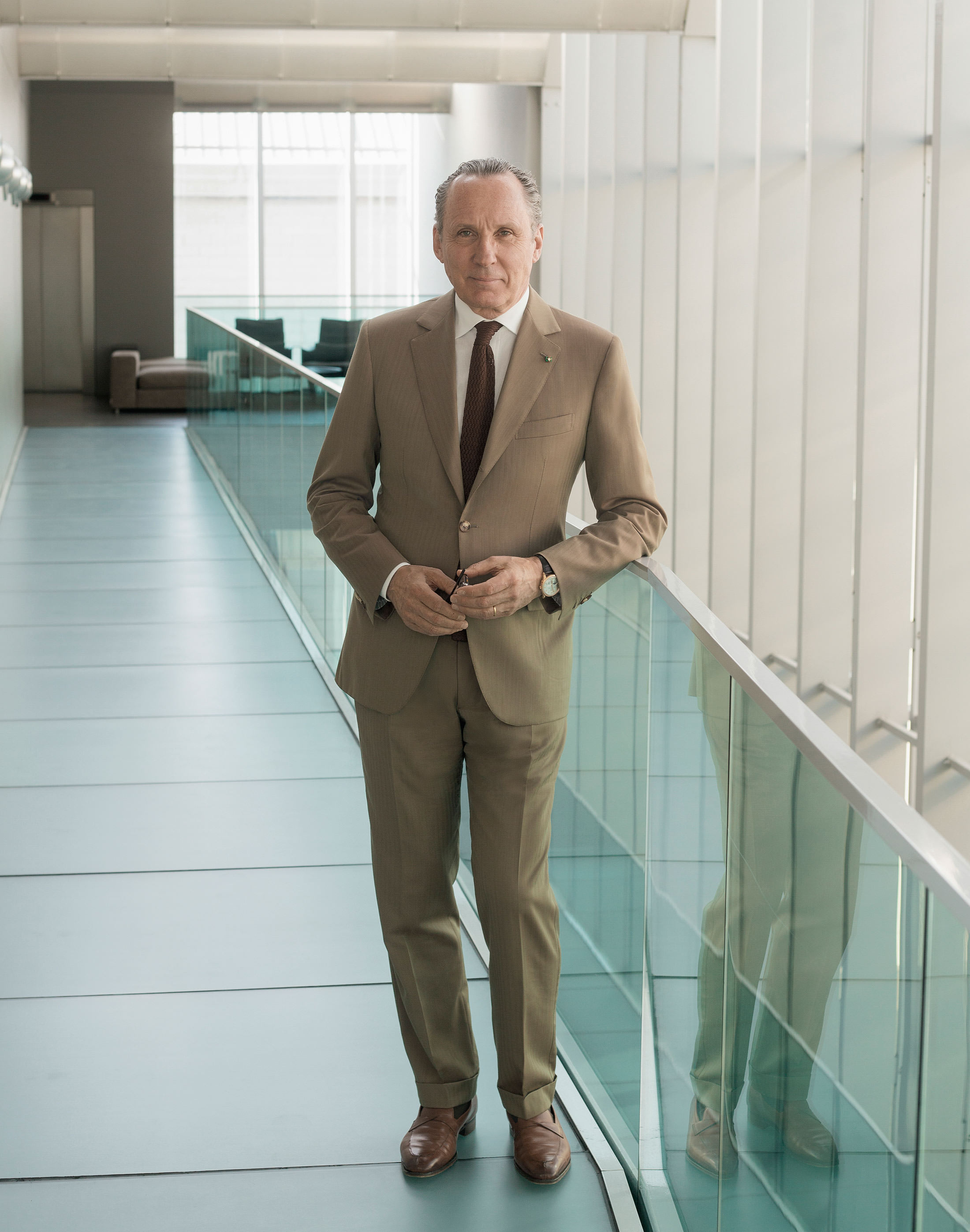 Gildo Zegna is at the helm of a profitable billion-dollar business in an industry that’s constantly bracing itself against all manner of changes and difficulties.

“Where do you want to start?” Ermenegildo “Gildo” Zegna, the CEO of Ermenegildo Zegna Group, is seated across from me in the brand’s flagship store in Toronto—a boutique much less reserved in vibe than I had pictured, being familiar with the storied Italian company’s reputation for sharp tailoring and its designation as one of the world’s leading luxury fashion houses. The third generation of the eponymous empire, Zegna is distinctly unfussy. And why shouldn’t he be? He’s at the helm of a profitable billion-dollar business in an industry that’s constantly bracing itself against all manner of changes and difficulties. The only time a hint of haughty is detected is when he’s brought an espresso from around the corner and then, truthfully, it’s embarrassingly understandable. (The one time a Canadian can’t say “Sorry” too effusively is when offering an Italian an espresso.)

But back to where we started. I ask him to recall his years spent in London, where he attended university in the mid-to-late seventies. It’s a cultural period noted for its fashion risks, from punk to glam, but as Zegna points out, it also had a foot firmly planted in traditional tailoring, too. “London has always been a city with specialists in the men’s field,” he says. “[But] it was very polarized. Either you had the flower style of fashion—sometimes it could almost go into a kinky style. And then you had the clothing like Savile Row.”

Zegna fondly recalls how clothing was brought to life through in-store displays for a shopper’s enticement.

At the time, Zegna wasn’t committed to the idea of joining the family business founded as a wool mill by his grandfather, Ermenegildo, in the early 20th century. “In those years, I wasn’t so interested in fashion. I was figuring out what the future could be. It was more a life experience—living on your own, growing up, being independent, trying to get the best out of this new experience.” His soul searching brought him to another bustling metropolis, New York, where he took a job at Bloomingdale’s. While it may have been eclipsed by other upscale retailers in recent years, at the time Bloomie’s was enjoying a moment under president Marvin Traub, who had an enduring reputation as one of American retail’s legends. Zegna earned his stripes in sportswear, which was emerging as a key category of clothing and accessories. It’s hard to imagine a time when you had to make the argument that sporty clothes were chic. “It was the years in which jeans went from basics to being much more stylish,” he adds.

Another hint of a bygone era reveals itself during our chat. Zegna fondly recalls how clothing was brought to life through in-store displays for a shopper’s enticement. “These were the years of creative merchandising, [and] I think Bloomingdale’s had the best creative merchandising in town.” But that wasn’t all Zegna gleaned from his time on Lexington Avenue and 59th Street. “I worked on the floor,” he says, a candid moment of humility that people of his status rarely offer. “That experience in retail is key because you get to know the customer, and you confront the ‘yes’ and the ‘no’ of the customer.”

Some time spent rubbing elbows with consumers would benefit any future fashion empire scion, and the proof is in Zegna’s visionary approach, which has led the brand through many triumphs from store expansions to acquisitions, the most recent being one that shook the style world, when suiting’s king of quirk, Thom Browne, was brought under the Ermenegildo Zegna Group umbrella in August 2018. Smart move—business attire is becoming increasingly casual, and one day all that might be left are the dandies, eccentrics, and others so devoted to Browne’s off-beat aesthetic. Eight months into their union, Zegna’s attitude is similarly optimistic. “I think it’s a good partnership because we’ve established a good friendship; trust and respect are very important,” he says.

Such a pairing would likely be a risk for a publicly owned business; after all, since fashion is continually in a state of flux, taking any uncharted course can prove fatal. When I ask if his decision-making brio is affected by not having to answer to a bottom line, Zegna is adamant. “Would I have done things differently if it wasn’t family, or if it wasn’t private? No, I don’t think so,” he insists. “It goes with the status of the brand, and the goals.”

At times like this, Zegna speaks with the voice of someone still entrenched in the tumultuous but uplifting decade of the 1970s. “If you want to survive, you have to step up and take risks,” he says. To emphasize this mantra, he again points to the success of sportswear as a measure of which CEOs are worth their salt. “Take, for example, sneakers,” he says while gesturing at his own playful footwear. “If you’re [saying] you’re not a sneaker brand, you’re out of business.”

Zegna speaks with the voice of someone still entrenched in the tumultuous but uplifting decade of the 1970s.

Zegna’s put his money where his mouth is. Brashly hued and embellished running shoes are a part of the brand’s repertoire—a departure from luxe Italian loafers. And Ermenegildo Zegna’s artistic director, Alessandro Sartori, is entrusted with the monumental task of articulating luxury and streetwear in the same breath. The insistence on continually finding entry points to a shopper’s heart comes straight from the top.

“You have to watch what’s happening, keep being curious,” Zegna says. “There are—or were—many companies that wanted to have an easy life; stability is the name of the game. I think those days are gone [and] I think it’s a good thing. Regardless of whether you’re private or family, you have to jump because the market is a jungle. It’s full of ups and downs—many variables that are impossible to control, and they’re not up to you and me.”

Zegna keeps his eyes on the future in other ways as well. The house continues to support a number of environmental and socially focused initiatives—founder Ermenegildo Zegna was a passionate conservationist himself creating a nature park, Oasi Zegna, in the Biella Alps in Piemonte, long before it was en vogue to shop sustainably. Zegna tells me about his own legacy when describing the Ermenegildo Zegna Founder’s Scholarship, a program in its sixth year with a 25-year commitment to supporting select young Italians in pursuing their studies. “I think that the two areas that are most important for the future of humanity are education and medicine,” he says.

In this regard, Zegna reveals an endearing amount of reverence for those who will build what’s to come, despite managing a company that started in 1910. “I like to deal with young people,” he says. “You learn from it.” He admits there’s a ways to go in terms of the company being a leader in the digital space. “We do invest, we’re making progress, but to say that we’re there, no. But I don’t think many other luxury brands or companies have figured it out.” Even so, the brand’s celebrity fans more than make up for whatever other fodder a social media expert would suggest, Mahershala Ali being one of the brand’s advocates at this year’s Oscars, decked out in a novel Ermenegildo Zegna XXX jacket; Chris Pine wore a white suit from the brand at this year’s Screen Actors Guild award ceremony.

Receiving these kinds of endorsements from an emerging generation of stars is yet more evidence of Zegna’s bets paying off. Every winner must retire eventually, though. A reluctance to rest is still evident when he’s speaking, but Zegna is also very aware that there’s a time limit to his contributions, and succession planning is also on his mind. “Once you turn 60, you have to start thinking about it. It’s key for the business, and for the family.”

It’s hard to imagine another generation of the family following Zegna’s lead, since his experience has shown itself to be integral to the house’s longevity. If his good-natured outlook is a genetic trait, it could take the incoming leadership (Edoardo, Zegna’s son, has taken an active role in the company, focusing his efforts on the digital side of the Ermenegildo Zegna Group as head of content and innovation) a decent distance, at least. “I’ve made many mistakes,” Zegna says, smiling. “But the important thing is that you make mistakes with a
positive attitude.”