These days, you need only peek at a friend’s bucket list or Instagram feed to know that Portugal has become the place to visit. The 2018 Luxe Report from global travel network Virtuoso places the country on the list of top emerging destinations. Lisbon’s sloping waterfront calls to most with its international accessibility, cuisine (its seafood equally delicious whether freshly caught or artfully canned), and historic streets (safe and lined by buildings tiled in beautiful azulejos). Sintra, on the other hand, is often allotted a day-trip slot—but the city calls for a longer stay, as the royals used to do.

These days, you need only peek at a friend’s bucket list or Instagram feed to know that Portugal has become the place to visit.

As far back as the 15th century, King Manuel I of Portugal would retreat to Sintra for entire summers, indulging in the cool microclimate, hunting the abundant wild game, and funding the building and reconstruction of monasteries and churches. As centuries passed, nobility followed suit: Viceroy of India João de Castro, Queen Maria I, and perhaps most notably King Ferdinand II, with his expansion of a mountaintop monastery to the marvel that is now the Palace of Pena, its 500 acres of botanical gardens bursting with over 500 species of trees, from native umbrella pines to lush fern and magnolia from afar. While the multicoloured palace has become something of a poster child for Sintra, a subtler stay—though no less handsome—awaits today’s visitors at the Tivoli Palácio de Seteais. 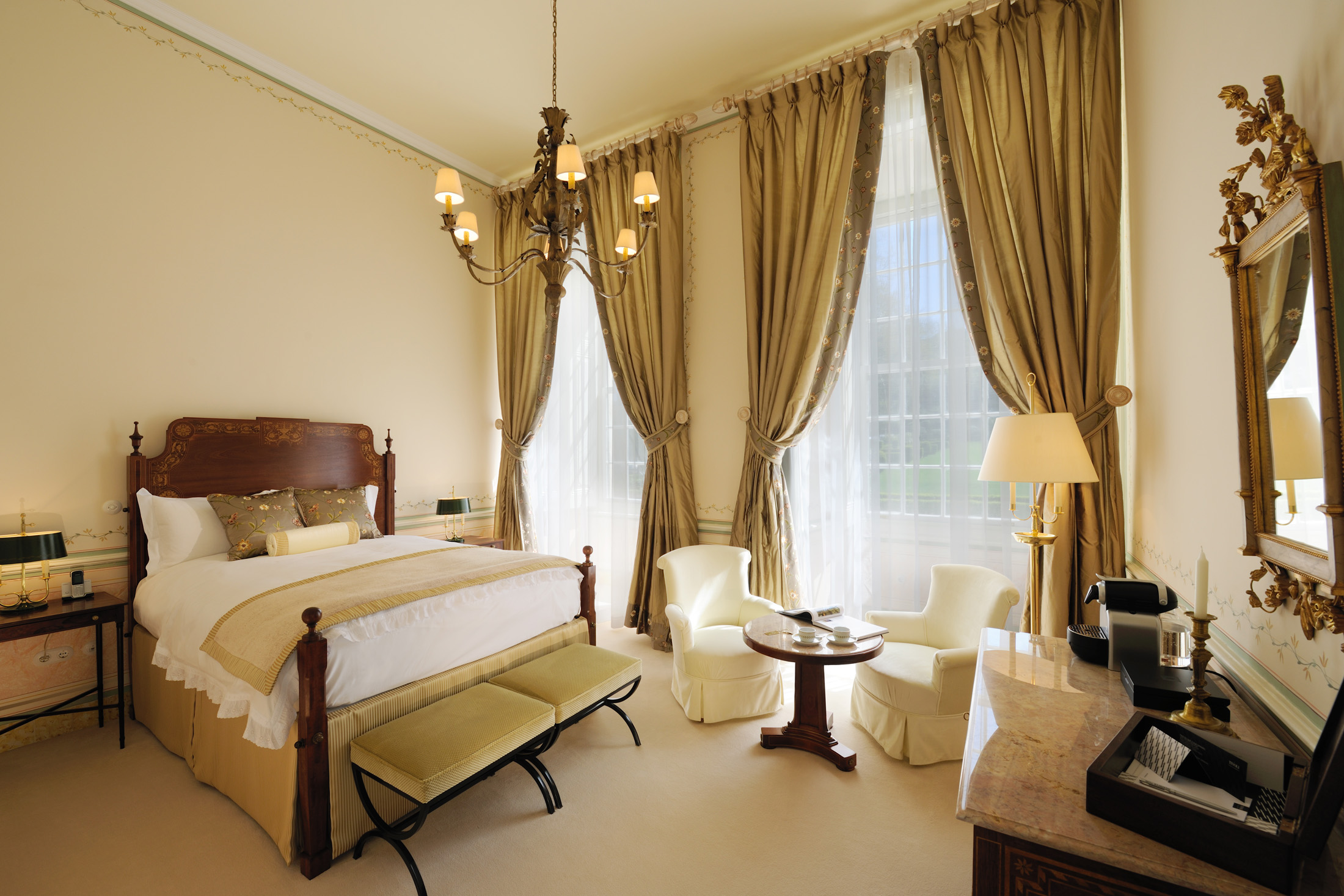 A short walk from the historic town centre, the 15-acre gated property dates back to the late 18th century, when it became the residence of the Dutch consul. Many eminent Portuguese families continued to make a home here, including the fifth Marquis of Marialva, who constructed the ornate archway joining the palace’s separate wings to complete its current-day façade. The palace went unused in the century before Tivoli opened it as a hotel in 1955, after which Agatha Christie, David Bowie, and Brad Pitt have been among the guests. 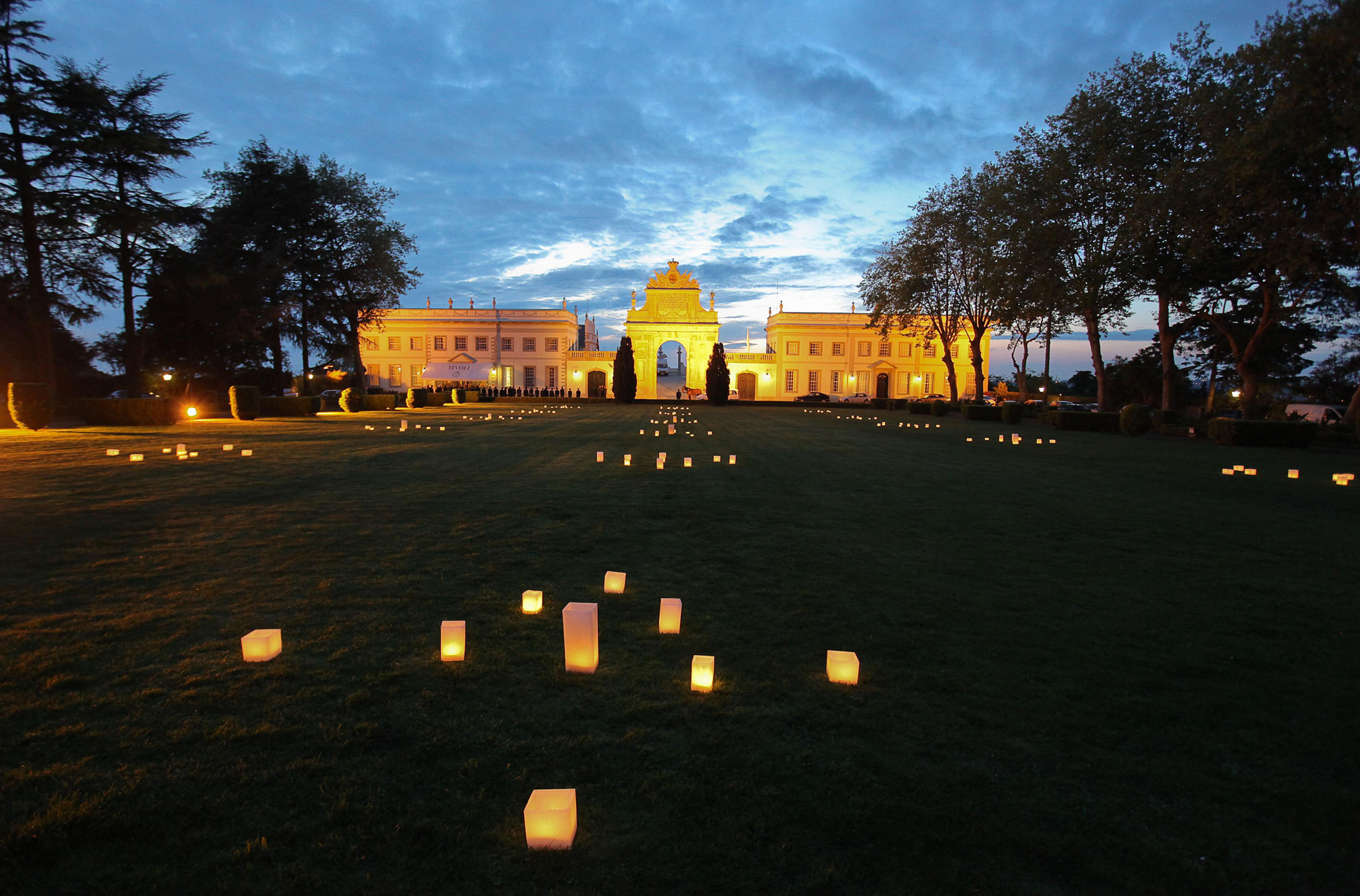 A half-hour drive from Portugal’s bustling capital Lisbon, the city of Sintra is often referred to as a fairy-tale haven. Certainly, the number of palaces populating the UNESCO World Heritage site paints a happily-ever-after scene, but it is the misty mountainside setting with rolling woodlands that lends an ethereal quality to the terrain, making for an enchanting getaway.

To this day, a classic elegance permeates the high-ceilinged halls, immediately apparent upon check-in conducted in a drawing room where butlers serve queijadas de Sintra (the palace’s secret recipe rendition of the local cheese-and-egg tart, not to be confused with Lisbon’s iconic pastel de nata) and honey-sweetened lemonade squeezed from the fruits of the lemon orchard that can be spotted from the window. The neoclassical architecture, with traditional Arraiolos carpets and hand-painted fresco walls dress the hotel: scenes of a mythical love story in the Noble room, a tableau of frolicking children in the Pillement room, named for its artist, Jean-Baptiste Pillement. Every one of the 30 guest rooms, including the hotel’s exclusive suite, features hand-painted walls. In fact, save for contemporary in-room amenities (Nespresso machines and LCD televisions, for a start), you might think you’ve been transported back in time.

Into evening, the dining room fills with the glow of the setting sun and live piano music, like the final step in casting the palace’s spell.

This atmosphere persists as you spend time on the grounds, whether taking afternoon tea in the whimsical hotel bar or strolling the miniature hedge mazes with views over Sintra’s plains. Flanked by lemon trees, the pool is ideal for some strokes or lounging in a cabana. After game, set, and match on the clay tennis courts, post-play recuperation can be found at Anantara Spa. Housed in an old dovecote, the three-room spa serves signature Thai wellness therapies with local elements—think hydrating vinotherapy treatments with wine from the coastal Colares region. 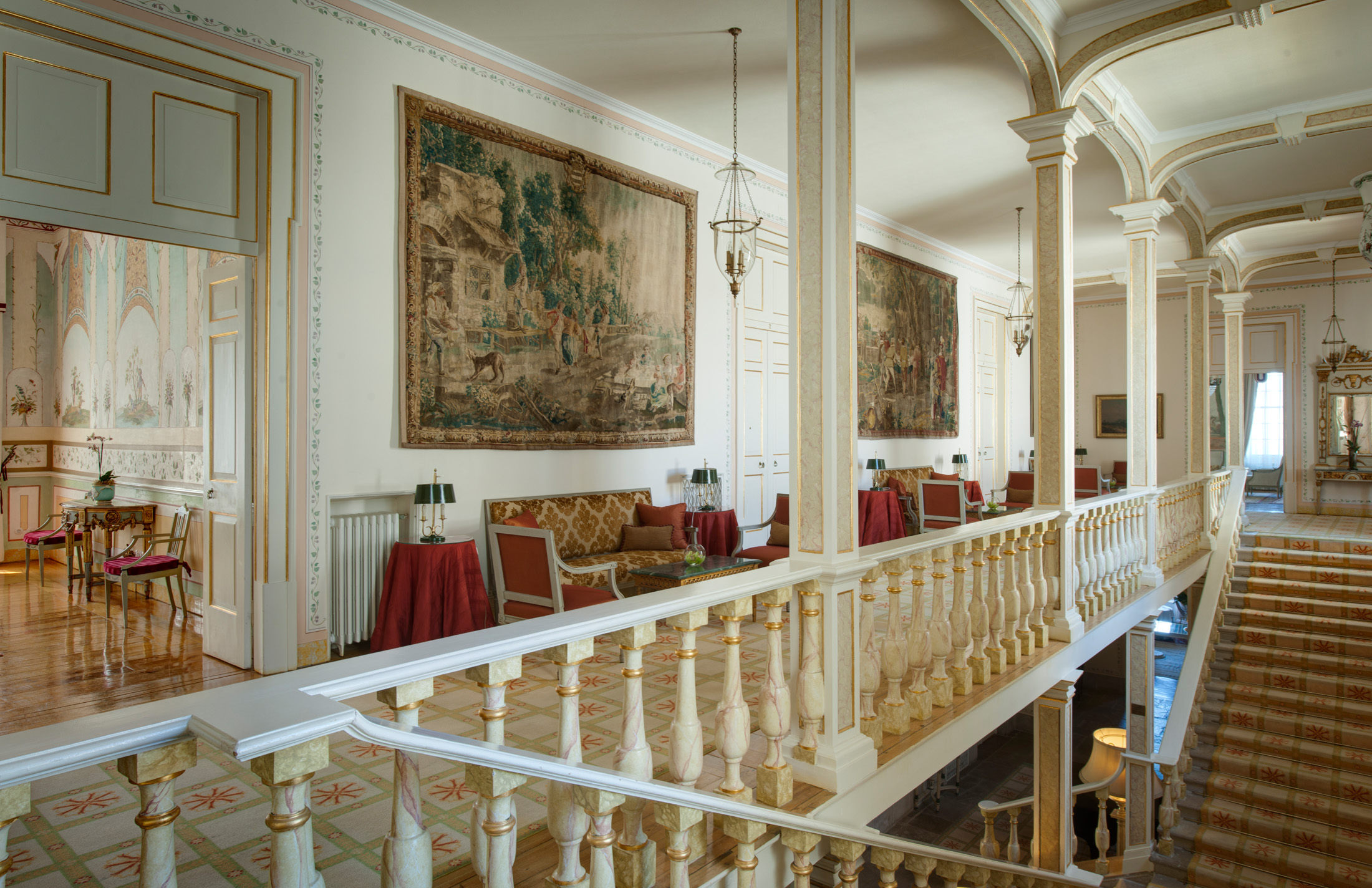 While the wine will do wonders for your skin, it would be a shame not to savour it as well. The new Colares-dedicated wine room is where tastings can be booked. To fully indulge in chef Milton Anes’ cuisine, the Seteais Restaurant serves Portuguese dishes with dashes of international flair—Algarvian octopus, braised codfish with presunto, and suckling pig breaded with panko. Into evening, the dining room fills with the glow of the setting sun and live piano music, like the final step in casting the palace’s spell.

House of the Nuns by Mário Martins Atelier

A Guide to Exploring Lisbon