No fewer than 332 islands make up the Fijian archipelago. Dedicate a year, and that’s close to an island a day of rugged cliffs, untouched beaches speckled with ornate seashells, and palm tree–flecked rainforest to explore. But once you meet the exotic beauty named Laucala, you may not want to venture further.

Rising out of the ocean in the northeastern part of Fiji, Laucala Island (pronounced La-tha-la) is a private island resort owned by 72-year-old billionaire Dietrich Mateschitz. The Austrian businessman—who co-founded the Red Bull energy drink company and has a net worth of $13.2-billion (U.S.)—purchased the 1,400-hectare isle in 2003 from the heirs of American publishing magnate Malcolm Forbes. Mateschitz himself visits Laucala twice a year, but he has invested limitless resources in its current iteration as one of the world’s most exclusive and luxurious private island resorts, opened to the public in 2008. 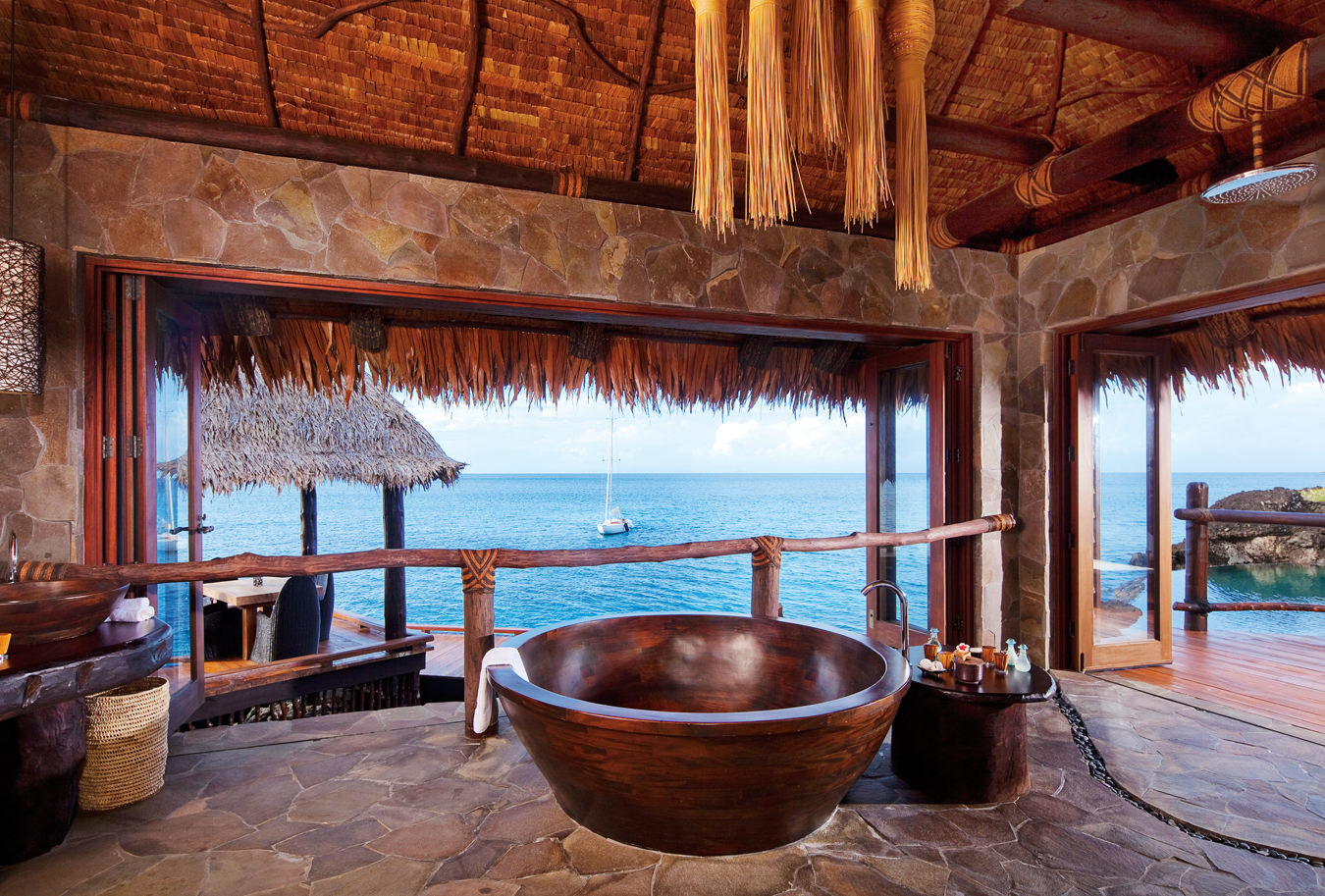 As far as all-inclusive properties go, the Melanesian escape tips dangerously close to perfect. It’s as if a handful of Michelin-starred restaurants teamed up with a watersport-themed eco-park, decked it out with high-end, handcrafted, and tropics-inspired furnishings, then situated it on a self-sustainable South Pacific paradise brimming with Fijian spirit. Two years ago, when The Guardian compared Laucala to Richard Branson’s renowned private vacation getaway, Necker Island, it consistently gave the former top marks, noting one huge advantage: “Regardless of when you travel, you don’t have to take [Laucala] over in its entirety, and its villas are extremely secluded.” (Still, guests can buy out Laucala—it happens a few times each year and costs $170,000 [U.S.] per night for 72 people. Rack rates begin at $4,800 per night based on double occupancy for a single villa, and climb to $45,000 per night for the Hilltop Estate, Mateschitz’s home base when on the island.)

I arrive one humid morning aboard a six-seat plane belonging to Air Laucala—the Mateschitz-owned airline that exclusively services the island—from Nadi, the city on Fiji’s main island, 45 minutes away. Stepping out on the palm-lined runway I’m greeted with a resounding “Bula!” from resort staffers, gathered with orchid garlands and a song of welcome, before I’m whisked off in a black Land Rover. The drive snakes through part of Laucala’s 600-acre coconut plantation, exceedingly lush to my eye, but I learn that it has been greener. On February 19 of this year, the severe tropical cyclone Winston hit Fiji. The country was wracked with Category 5–intensity winds of up to 220 miles per hour. 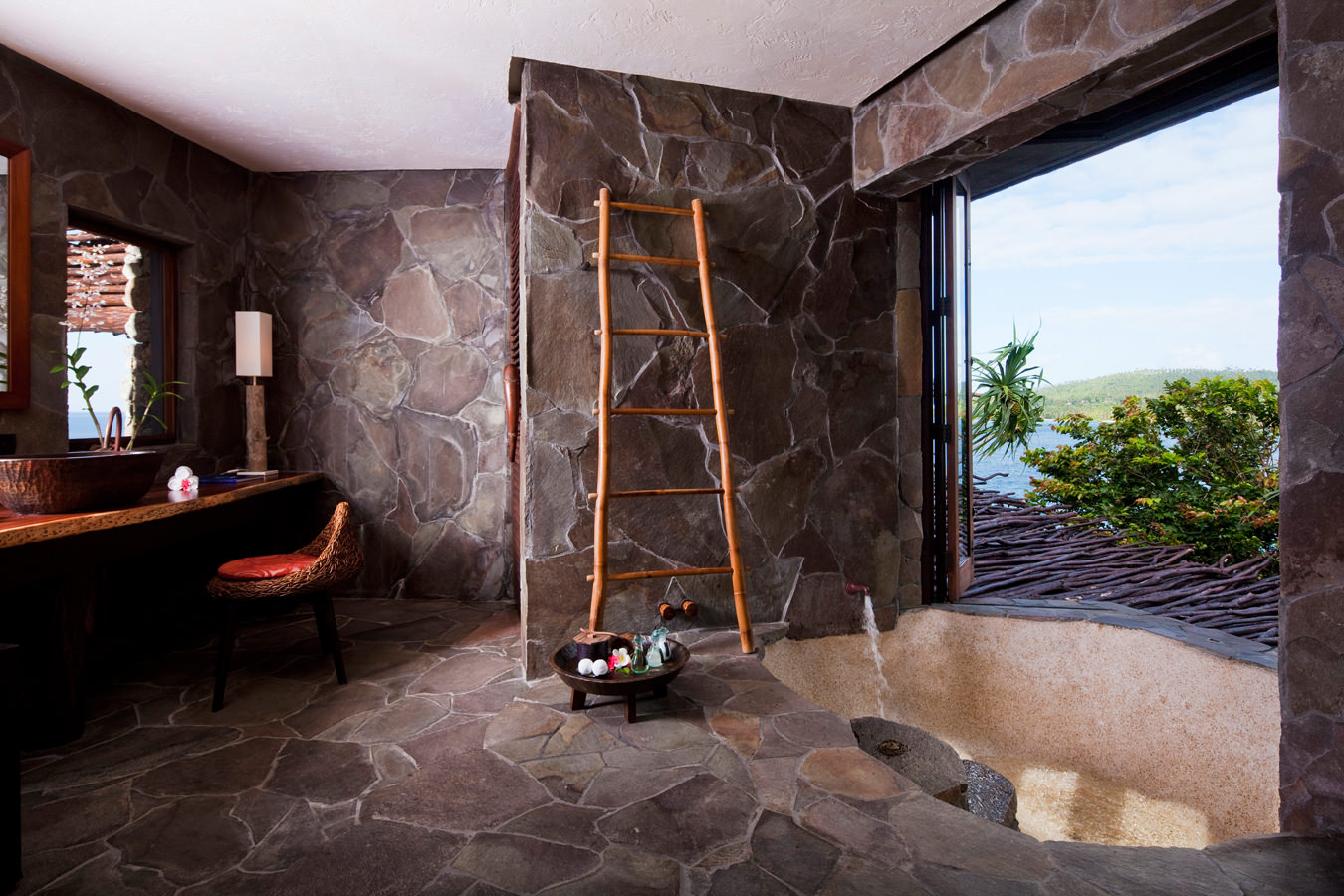 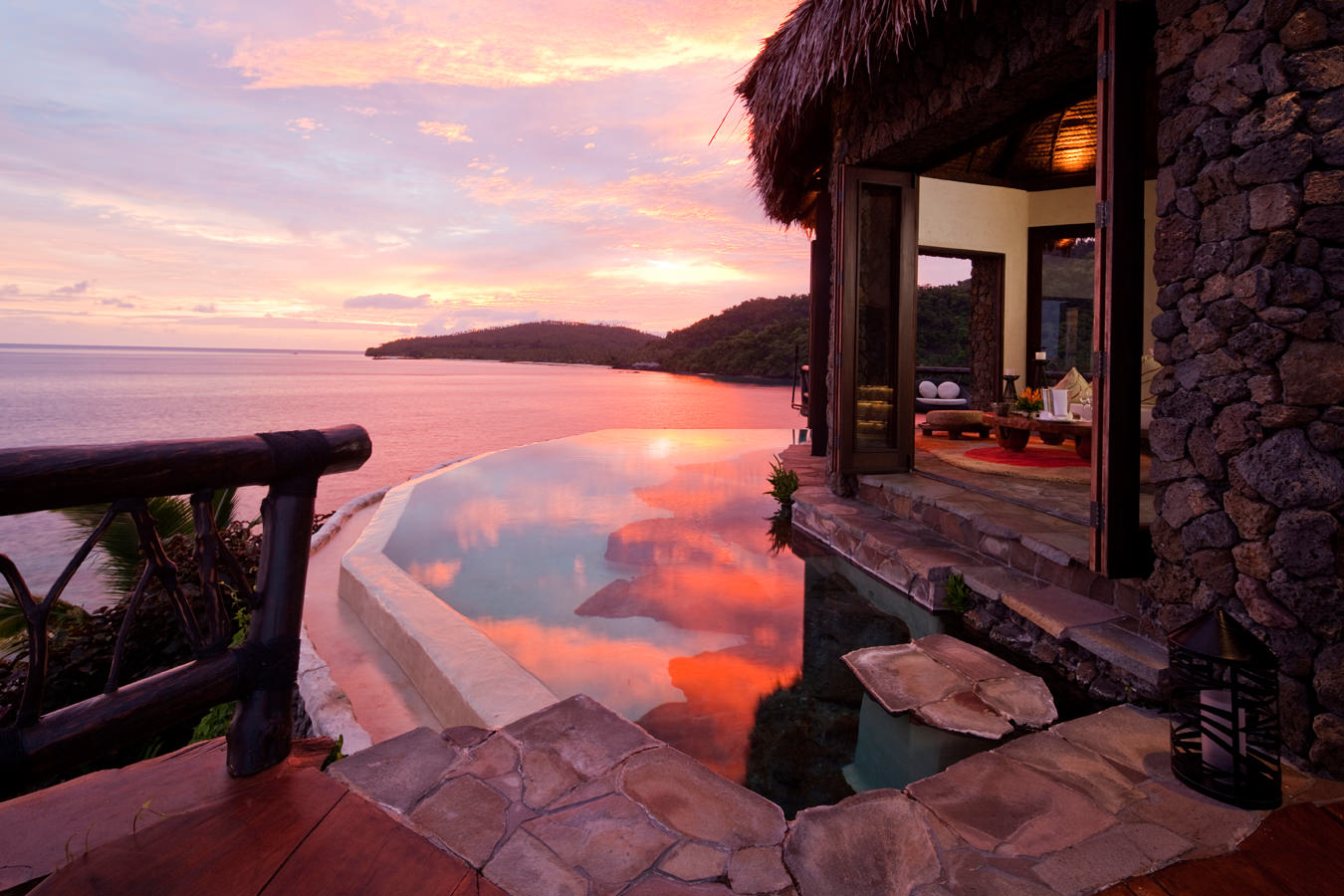 “Everything turned brown [on Laucala],” says Edvena D’Souza, the island’s director of sales and marketing, over breakfast at the Plantation House restaurant. “At one point, we had 800 people cleaning up because we had bookings and had to meet our July 1 opening.” Tree doctors were brought in from Australia to help restore the damaged foliage and, eventually, there was some fortuitous flooding on the island. “Everything turned green and came back to life,” says D’Souza. “In the end, nature always does its work.”

The island’s major structures made it through intact, even those that perhaps shouldn’t have—including an orchid greenhouse with 5,600 plants inside, and the hydroponic greenhouse, rife with trays of fresh microlettuce. Accommodations made it too, save for a few leaky mangi mangi roofs, the strong palm-leaf coverings that top each villa.

The island’s 25 luxe bures (Fijian for the hut-villas that dot the island) are outfitted with local elements like hanging “jellyfish” chandeliers crafted from shells and husk tassels. Airy outdoor furnishings are by Filipino design darling Kenneth Cobonpue and large granite bathtubs are both indoors and out—order a bath to be drawn and it comes complete with Bollinger champagne, bubble bath, and scattered flower petals. My roomy villa, Siga (sun in Fijian), is decked out with a lavish 970-square-foot pool and a mini-bar stocked with kombucha, Red Bull, and Fiji Bitter beer. 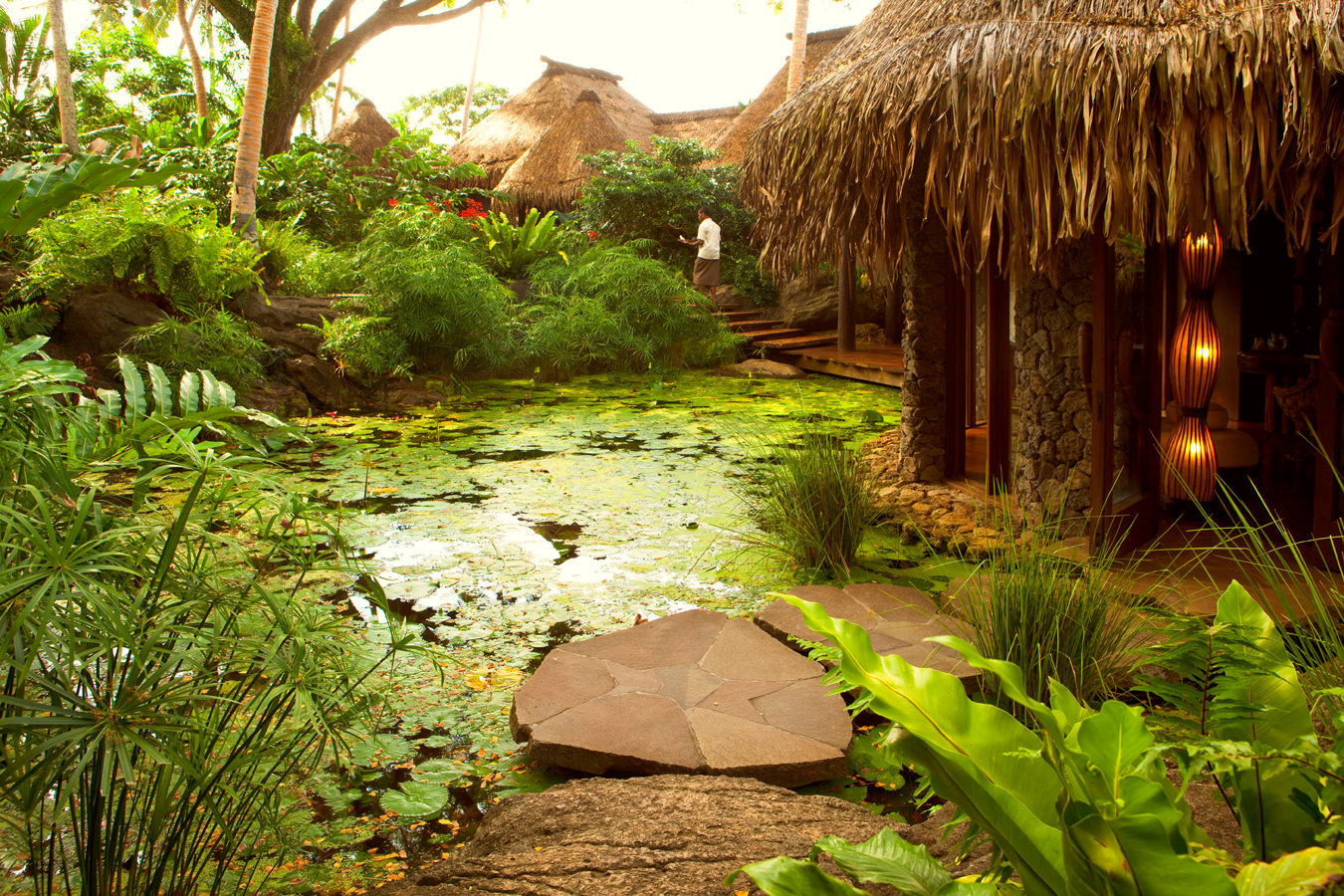 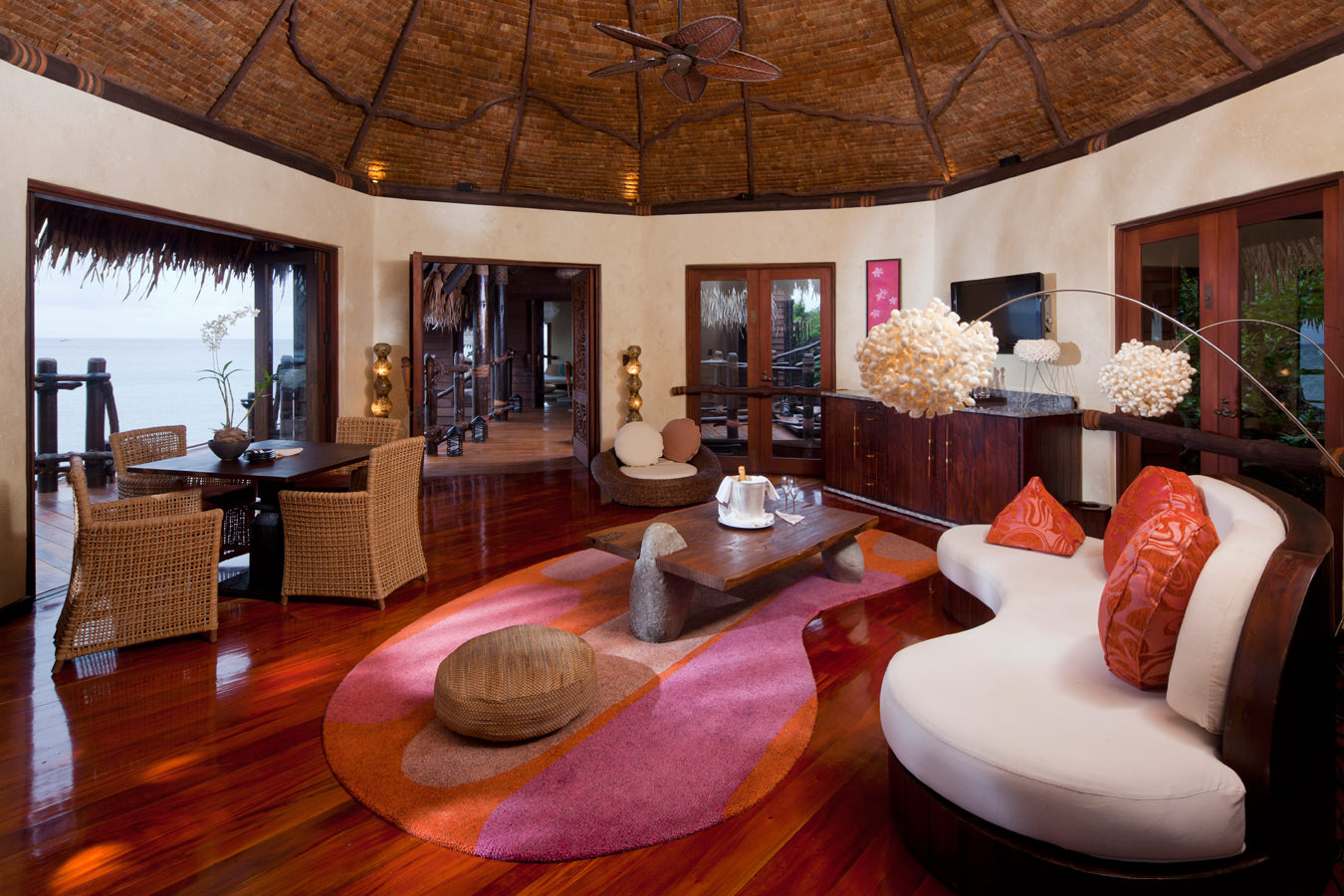 At any one of the island’s five restaurants, dinner is always an intimate affair. “On average, I get about three tables per night,” says Australian executive chef Anthony Healy, who heads up Plantation House, where he turns out a dégustation menu laden with the bounty of Laucala’s organic garden: Scotch quail eggs, pineapple carpaccio, roasted capsicum sorbet, and much more. No guest’s request is too lofty, and the plucky chef enjoys a challenge. “We have a guest from Germany every year who likes to come up with some bizarre food for us to make,” Healy says. “One visit he asked for a very specific dish, Salzburger Nockerl [a type of soufflé]. Of course, we made it.” The on-island farm raises Wagyu cows from Japan, as well as gold wheaten chickens from Austria—a rare breed called Sulmtaler. Order an egg soft boiled and it is presented in an ovoid ceramic serving dish so elegant that it could house a gem-encrusted Fabergé.

In keeping with Mateschitz’s no-expense-spared ethos—and possibly a by-product of Red Bull–fuelled enthusiasm—Laucala’s offerings in terms of activities are unsurpassed. There are golf carts provided for the guests of every villa to zip around on land; state-of-the-art WaveRunners to dash James Bond–like across the surf; an 18-hole golf course backdropped by volcanic mountains; and horses to ride on the beach. Take a hike through the jungle to Vatu Savai, the island’s tallest peak, for a 360-degree sunrise view, then attend a traditional kava ceremony (a mild narcotic tea made from ground root that is ceremoniously sipped throughout Fiji). The most coveted toy on the island is the DeepFlight’s Super Falcon Mark II two-seater submarine—Laucala is the only resort in the world that has one. The dark depths become accessible in the manoeuvrable sub, which makes spotting turtles, fish, and eagle rays possible, if not slightly nerve-racking.

“I’ve done this over 200 times,” assures Gordon Wakeham, the dive and activities manager who takes me under. “Every time you go in the water, you see something new.” I unwind as soon as the sub becomes enveloped by ocean; shoals of multicoloured parrotfish waft around us as three green turtles float by slowly, as if through Jell-O. 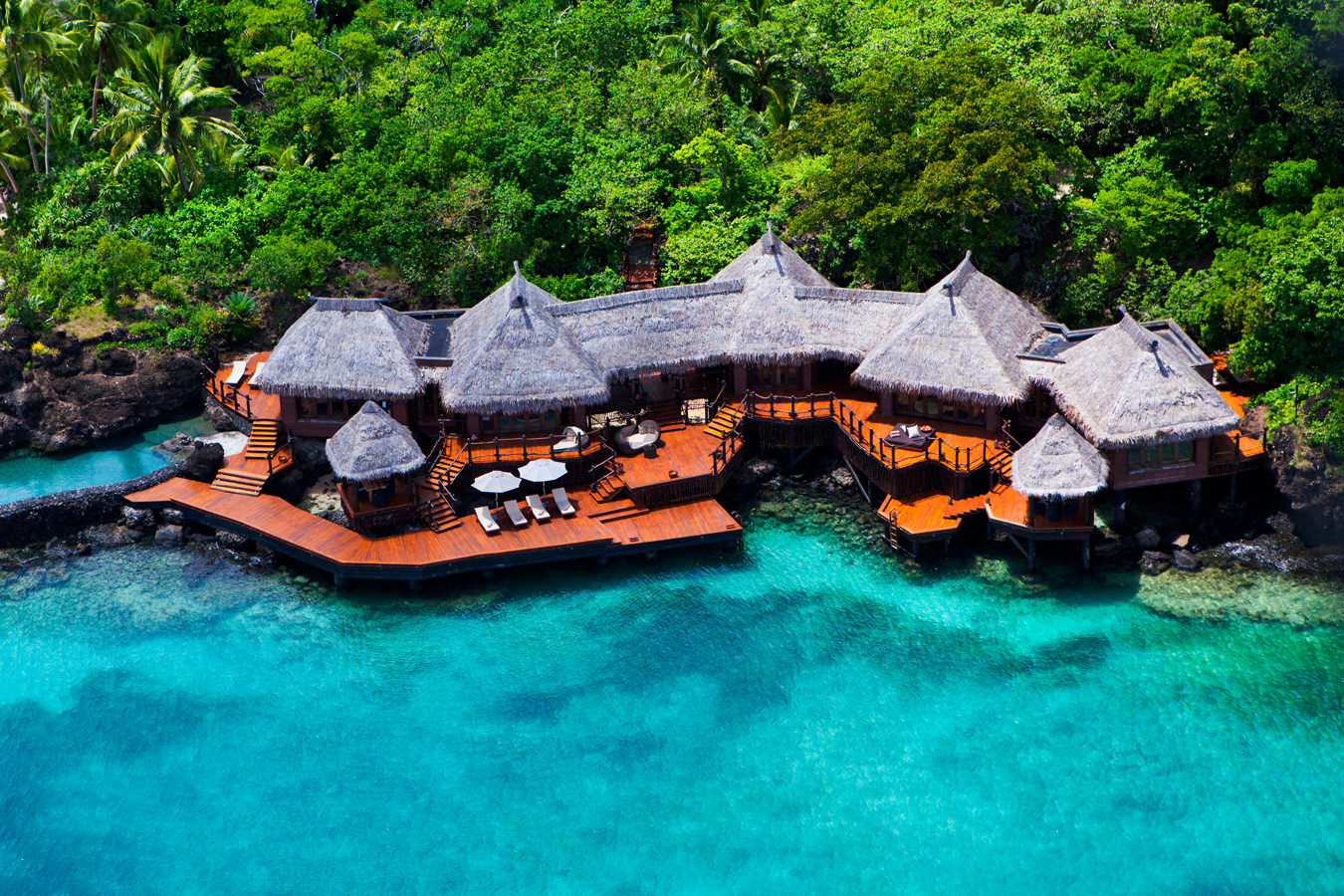 Laucala’s staff is 95 per cent local and 400-strong, and it boasts one of the largest staff-per-guest ratios of any resort in the world (16 per villa). During my stay, there are only 18 guests, but even if it were “busy” on the big island, it wouldn’t feel like it. That’s one of the reasons high-profile guests flock here—anonymity. Oprah loves it. So does Keith Richards. Skateboarding pro Tony Hawk did an Instagram photo shoot in the see-through 25-metre lap pool. And when Elle Macpherson was married here in 2013, there were no paparazzi photos; Laucala pays the Fijian government for a no-fly zone above it.

Abundant in terms of the things money can buy, Laucala is also coveted for things money cannot. For one, flitting among the island kingfishers is a bird quite unlike the rest: a rare orange dove that inhabits only five other islands in Fiji. Paula Vatunicoko, the assistant chief concierge, spots one for us on an evening drive. “On a bright, sunny day,” he muses, “it is like a fireball in the sky.”

From the Red Bull to the orange doves and everything in-between, it doesn’t get much more paradisiacal than this. The Secret Life of Molokai