At the time Italian jewellery company Pomellato was founded in the late 1960s, fine jewellery was still entrenched in the realm of haute couture—it was made atelier-style, according to the highest standards of craftsmanship with the best materials (gems, set in 18-karat gold or platinum), and it was always hand finished and often custom made. If you could afford fine jewellery, you were probably a royal family member or a famous opera star, or perhaps a head of state. Fine jewellery was grand and formal, and the only alternative was costume jewellery, made of plastic or other non-precious materials, and as disposable as a cheap razor. Italian goldsmiths have always been particularly gifted in the design and craftsmanship of fine jewellery, and one of them, Pino Rabolini, was something of a rebel. He believed that fine jewellery should be worn by ordinary women to the ordinary events of their everyday lives. According to Rabolini, who learned his craft at his family’s jewellery bench, this everyday adornment should be made to the standards of high jewellery but designed with less pomp, on a smaller scale, without the grandeur of crown jewels. It was not a status symbol; it was fashion. He called his company Pomellato, after an elegant, rare breed of horse, as a way to express the creativity and unique character of the jewellery, and perhaps to express the wildness of its nature. 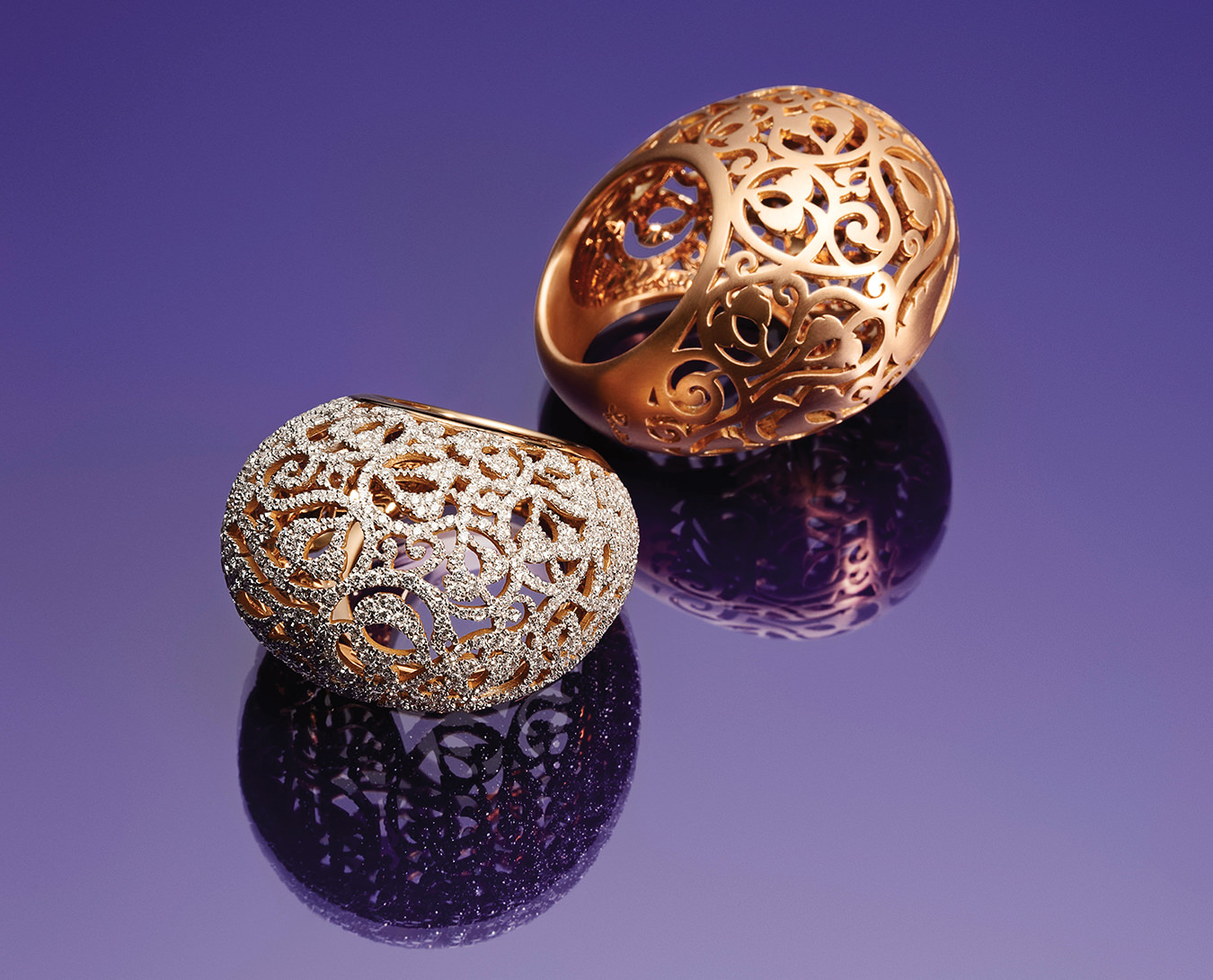 Rabolini’s prêt-à-porter approach to jewellery caught on, not only at home in Italy but across Europe and, eventually, North America. It was an idea whose time had come, as popular as the hula hoop, but with the staying power of ready-to-wear fashion. Pomellato collections are constantly renewed and refreshed like runway designs, in keeping with founder Rabolini’s philosophy of creating jewellery according to traditional values combined with modern flair and creativity. He created high jewellery not just for the masses, but for everyday wear that could carry over into night, unless of course you were attending a state dinner—and even then, Rabolini could make you a piece that would rival that on any red carpet or royal wedding.

“Introducing the concept of prêt-à-porter in the jewellery industry has clearly given Pomellato a valuable competitive lead in the market, which has evolved over time,” says global CEO Andrea Morante. “We intend to preserve this creative spirit and quest for innovation, and sometimes anti-conformist attitude,” he says. “They are integral components of the brand.” 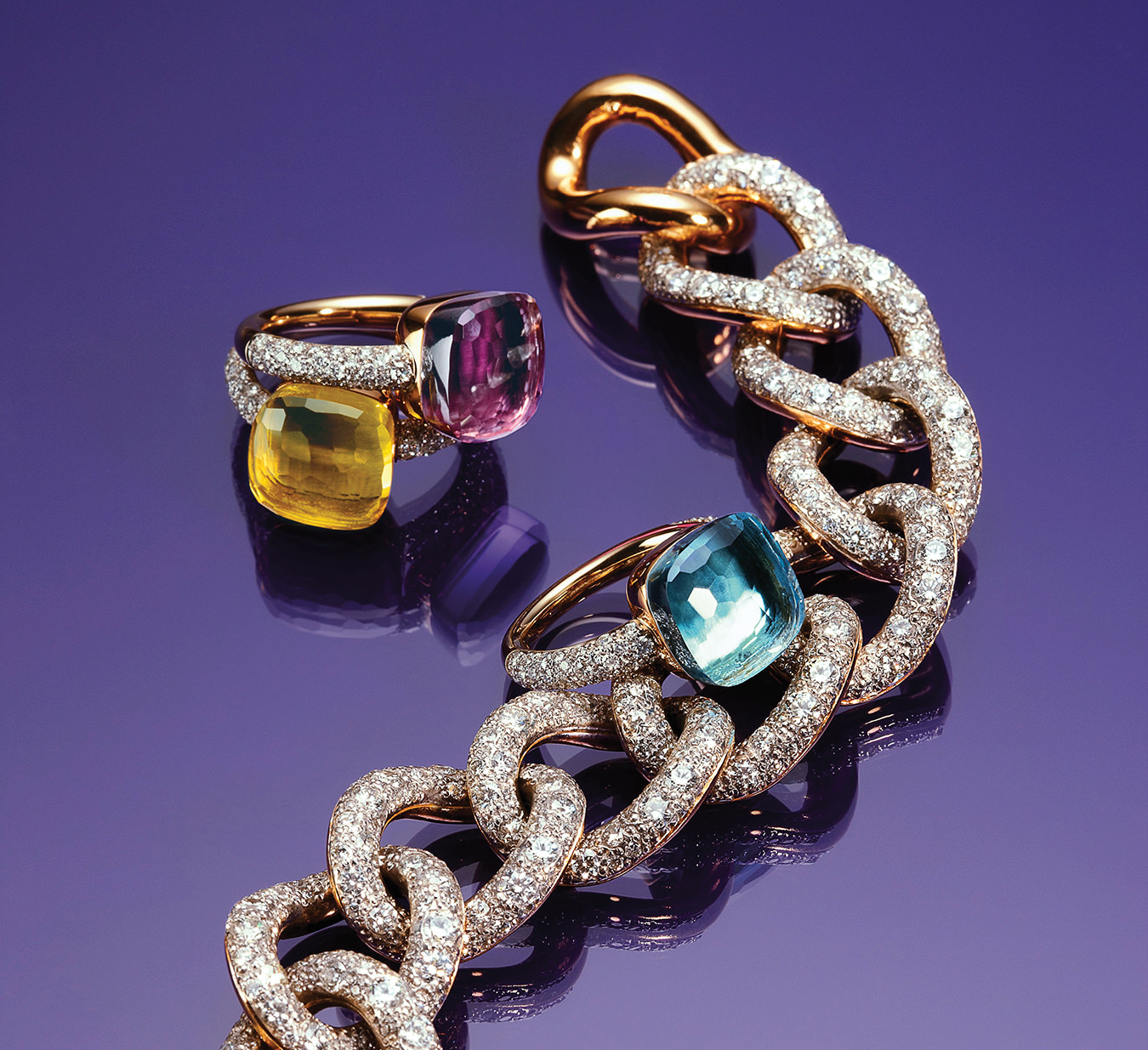 In April 2013, Pomellato was acquired by the Kering group (formerly PPR), which has become known for its elite stable of luxury Italian brands, including Gucci, Bottega Veneta, Brioni, Sergio Rossi, Balenciaga, and the luxury watch brand Girard-Perregaux. In all, there are 22 brands and 35,000 employees worldwide, with a revenue of 9.7-billion euros ($14-billion Canadian) in 2013. Despite widespread belief that an artisanal brand, once it becomes part of a conglomerate, is transformed into a mass-market machine, Kering goes out of its way to say there is no compromise of the handcrafted value of its brands, going so far as to adopt the motto Empowering Imagination. The company’s philosophy is to allow creativity to flourish within the workshops of each individual brand, in the belief that it is the best way to add value for its customers.

“In our industry, creativity and imagination are the name of the game,” says Morante. “Kering’s motto of empowering imagination is a testament to the importance that the group attaches to the creative side of its activities.” That said, there are advantages associated with inclusion in such a vast parent company—each brand may be independent but does not function in isolation. “There are revenue synergies, including Kering’s strong position within the domains of real estate, which helps Pomellato’s global retail expansion,” says Morante. “There are also cost synergies, such as buying at better terms and benefiting from far more competitive financial conditions.” Morante also mentions market research, or “information synergies”, an inevitable aspect of any modern global brand, as an advantage. “In our industry, being well informed on marketing trends and business opportunities can make a great difference,” he says. “Kering provides that valuable information to us.” 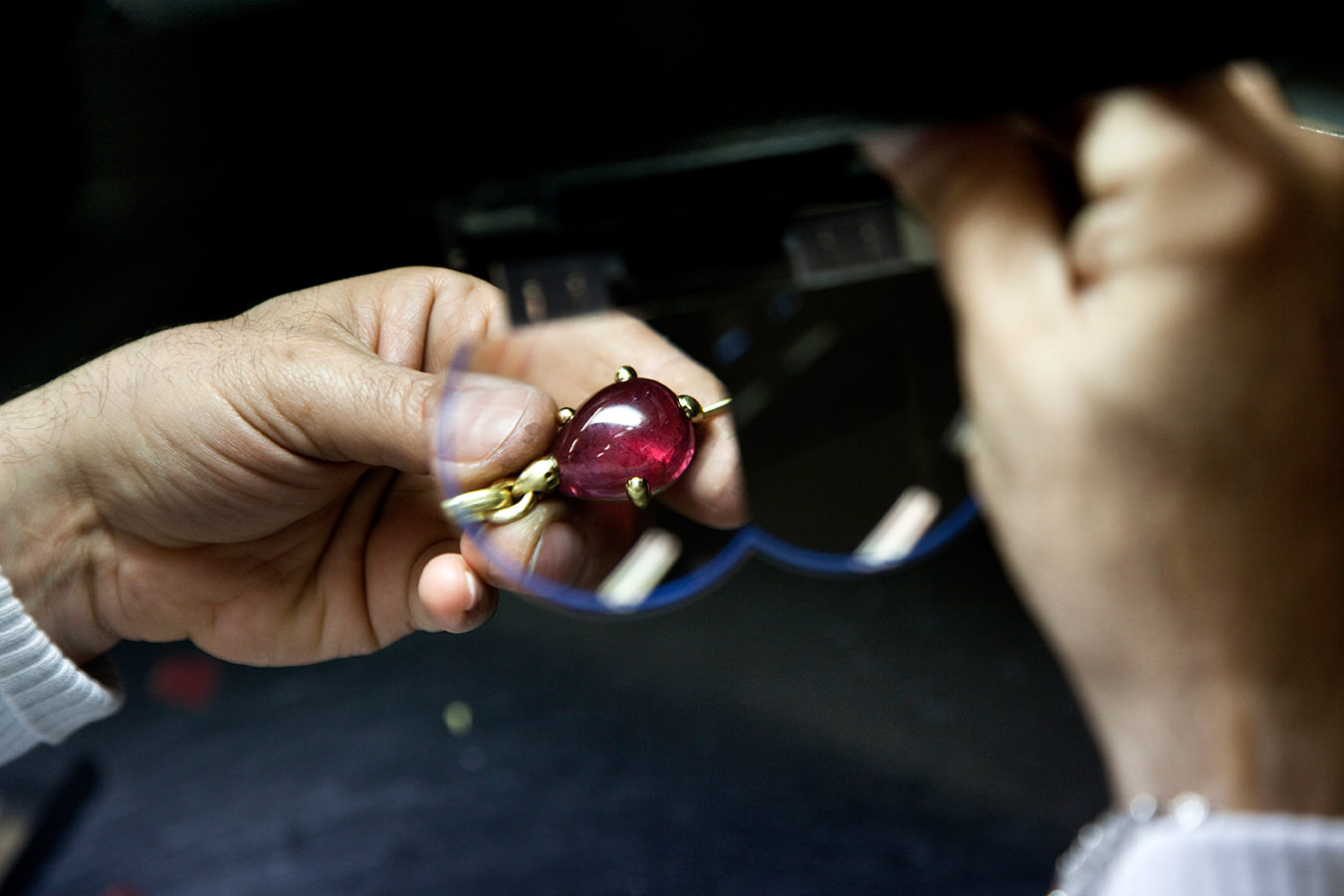 It is perhaps with some of this market intelligence at hand that Pomellato has chosen to open a 1,000-square-foot boutique in downtown Vancouver this September. “Vancouver will be our first free-standing store in Canada,” says Morante. “But we have been represented in the country for the last 15 years through important local partners. Vancouver, with its exposure to the Pacific, is a perfect place to start, and we already have a strong following as a brand in the North American market, which I am convinced will continue to grow over time.”

Founder Pino Rabolini called his company Pomellato, after an elegant, rare breed of horse, as a way to express the creativity and unique character of the jewellery, and perhaps to express the wildness of its nature.

Although the brand touts its prêt-à-porter roots and sensibility, and at its core represents an aesthetic of formal simplicity, it is important to note that it is, and always has been, made to haute joaillerie standards, with hand craftsmanship and finishing, precious materials, and fearless creativity. The Pomellato collection is particularly distinguished by its pioneering use of gemstones, combining unusual colours with large, bold shapes.

Each collection uses colour in a unique way. The designs in the Nudo and Sabbia collections are signature pieces. The Nudo is all about pure lines, light, and colour—in Italian nudo is “naked”, a nod to the simplicity of the classic solitaire, but here with a twist. On the one hand, it is a classic ring with a narrow shank and a single gemstone, yet there is a modern touch, a generously sized precious gemstone in a faceted cushion cut, with high colour saturation, in a wide setting. The Nudo petit is a smaller version of the Nudo classic, while the Nudo maxi pumps up the size and volume—one of the defining elements of modern luxury is the option of scaled-down, accessible versions of ultimate luxury pieces. Pomellato is a master of this concept. Nudo with diamonds is a dazzling light show, with rows of vibrant coloured gemstones with white diamonds set into the shanks.

Capri focuses on the vibrant, saturated blues of the sea, with fine turquoise, along with other opaque gems in colours of the Mediterranean palette, including coral, lavender jade, lapis lazuli, and chrysoprase. The Pomellato Sabbia (“sand”) collection takes it down a notch, pairing rose gold—the most important trend in jewellery since the discovery of the diamond—with fashion-forward black and brown diamonds that lend a rigorously modern feel to the classic diamond ring, bracelet, and necklace. Arabesque uses brown and white diamonds, but sometimes adds amber, rock crystal, and smoky quartz to the mix. It is this collection that really showcases the goldsmithing talent behind the brand. Elaborate swirling arabesque or floral patterns are carved out of the gold in bold pieces that allow the metal to make the statement. Special matte or polished finishes reveal evidence of handiwork at the goldsmith’s bench. 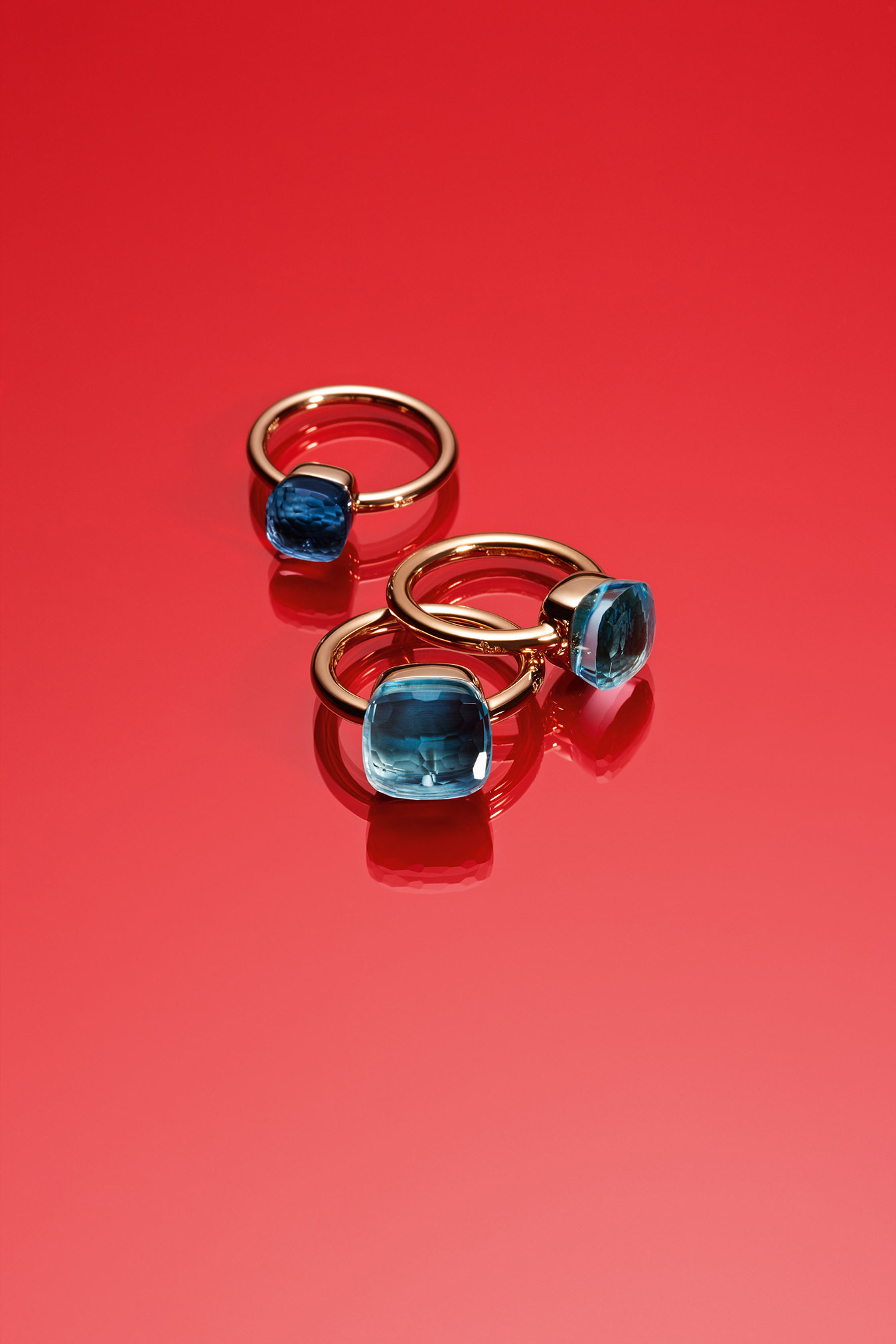 Tango (seductive and sensual, like the dance) mixes rose gold and brown diamonds with the edgy look of burnished silver—adding a “rock spirit” element to the jewellery, which has itself become an important genre in fine jewellery, one dominated by a trend toward blackened metals. In Tango, Pomellato also adds unusual gems to the mix, such as prasiolite and amethyst, both of which are at the affordable end of the coloured gemstone scale (compared to ruby, sapphire, and emerald, which at their highest quality grade can easily be priced above diamonds).

Not that Pomellato doesn’t use the very best gemstones that can be found. If you want to see what the brand is capable of at the very high end, the Pom Pom collection is where it gets really juicy. Given the craftsmanship values of the company, it is a natural step to occupy the realm of high jewellery. The “quest for innovation and sometimes anti-conformist attitude” that Morante speaks about defines the ready-to-wear philosophy of the brand, but it is also a good description of the spirit of haute couture. The Pom Pom collection is in fact defined by the company as haute couture, which is characterized by utter stylistic freedom. Like custom commissions, pieces are often designed around one extraordinary gemstone, whose rarity, magnitude, and irregular shapes render them unique even next to pieces of similar design or structure. The bon bons of the Pom Pom are not for everyday wear, unless you have occasion during the day to don a 23-carat, cushion-cut Tanzanite cocktail ring surrounded by 34 rose-cut Tanzanites and 48 diamonds, or, say, a 65-carat fire opal surrounded by 30 carats of orange sapphires. This is colour at its maximum voltage, and represents the essence of the Pomellato aesthetic. Pom Pom was launched in 2007 to celebrate the brand’s 40th anniversary, and the precious pieces are sold exclusively by appointment in select locations around the world.

The ultimate goal of Pomellato, however, is to make this kind of fearless creativity accessible to women in their everyday jewellery—no appointment necessary. “Pomellato will continue to play a significant role within the jewellery industry by reaching out to a broader customer base in North America and, particularly, the Pacific region,” says Morante. “In Europe, we are already well established and happy with our achievement of being among the top five jewellery companies.” He is quick to note that this does not mean compromising the standards of hand craftsmanship—of Pomellato’s 500-plus employees, 100 are master goldsmiths. “In our case, expansion is restricted by the fact that we want to continue our handmade tradition, and we want to preserve all those values that only gradual growth can ensure. We will grow in Canada,” he says, “but at an elegant pace.” The Life and Work of Zadie Smith