Mention Hawaii and people think of pineapples, swaying palms, picturesque sunsets, foaming surf, and lithe hula dancers. This is all true. But with orchid jungles, lush green valleys, rocky shores, and rolling lava fields, Hawaii also provides some incredibly scenic drives. These include Maui’s Hana Highway, Oahu’s Windward Coast, Kauai’s Na Pali Coast, and a particularly untamed stretch of road on the Big Island that will take you to some exceptional adventures.

Saddle Road, officially known as Hawaii Route 200, is a ribbon of paved blacktop that provides unforgettable scenery. While the main highways of the Big Island hug the coast, this journey veers inland; the twisting, hilly, deserted Saddle Road connects the east and west sides of the island. The 85-kilometre strip of asphalt cuts between two volcanoes, Mauna Loa and Mauna Kea—Loa being the largest volcano on Earth.

It’s neither here nor there as to which side of the island to commence the drive; I begin in the east, in Hilo, the rainy windward side. The tropical forest is remarkably green and dense with palms and large primitive ferns. The town of Hilo, tired and battered, has the feel of old Hawaii, as the architecture reflects the plantation style of the 19th century. Driving west, the vegetation dwindles and then vanishes like a magician’s rabbit. On both sides of Saddle Road now is the charcoal-black smooth lava flow called pahoehoe. The road dips down and crests up like a roller coaster, rising to 2,000-metres elevation at about the halfway point. The fog is immersive, encompassing the vehicle like the touch of a ghostly hand. I get out of the vehicle to pace on the pahoehoe—a resemblance to the skin of an elephant—and just stare out into the rolling mists. It is an eerie sensation, complete with a whisper-like sound as the fog moves past. I get the sense that E.T. will appear and with that long glowing finger direct me back to my vehicle. 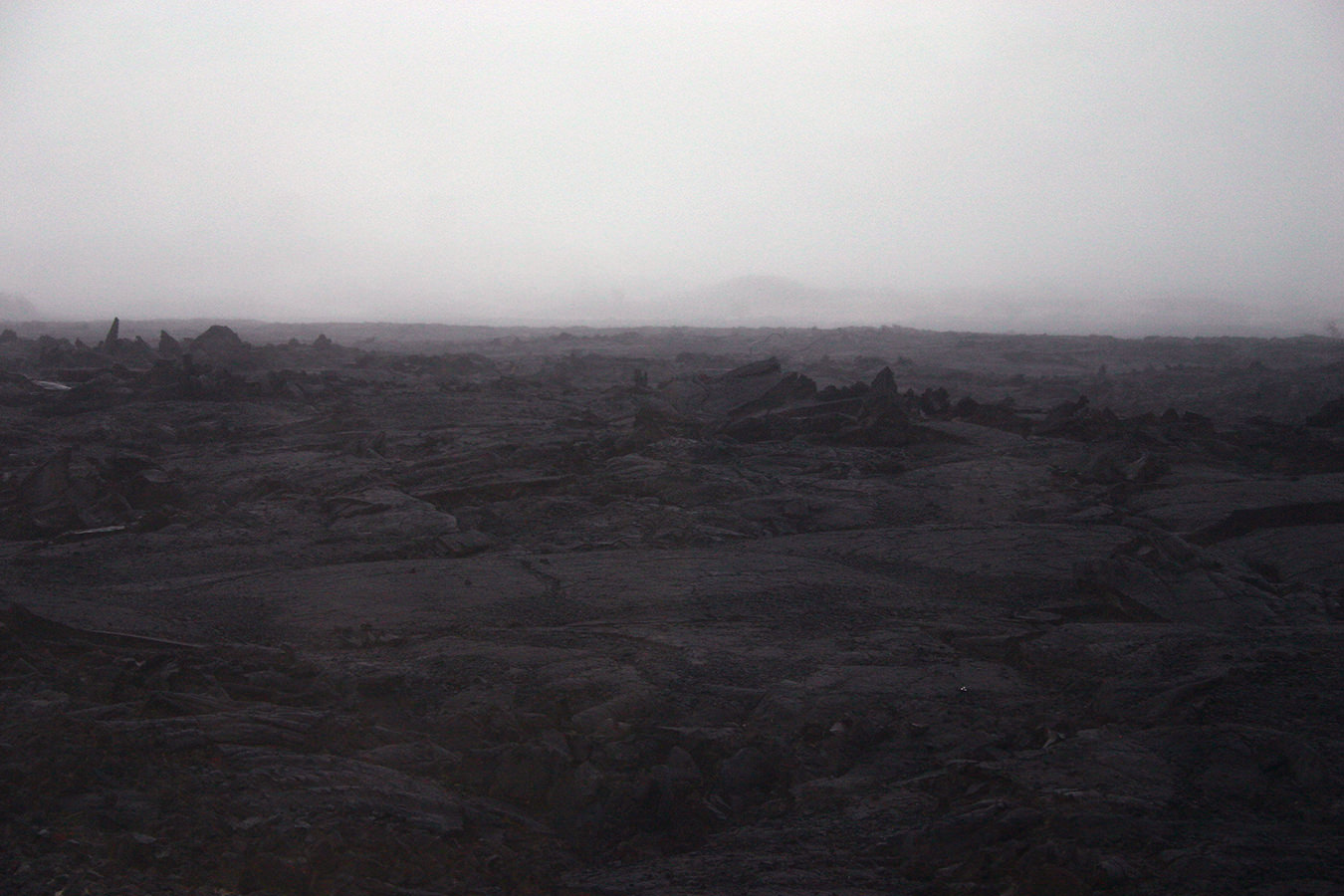 A stretch of Saddle Road on Hawaii’s Big Island.

Continuing on, the lava turns rust brown and, like ocean coral, has thousands of sharp edges. Hawaiians call this rugged, ragged, and jagged lava ’a-’a. The Big Island provides a vast canvas of environments, and as kilometre after kilometre of land unrolls, the scenery changes to resemble a fairy tale—yellow and green pastures with sheep, and long stands of tall eucalyptus trees planted in rows. Then, I breeze past herds of cattle through verdant Parker Ranch land, once the largest privately owned cattle ranch in the United States and today the largest in Hawaii, occupying 130,000 acres. Nearly two hours have passed since this journey began, and I have now reached the west side of the island, the country roads and traffic lights marking civilization. 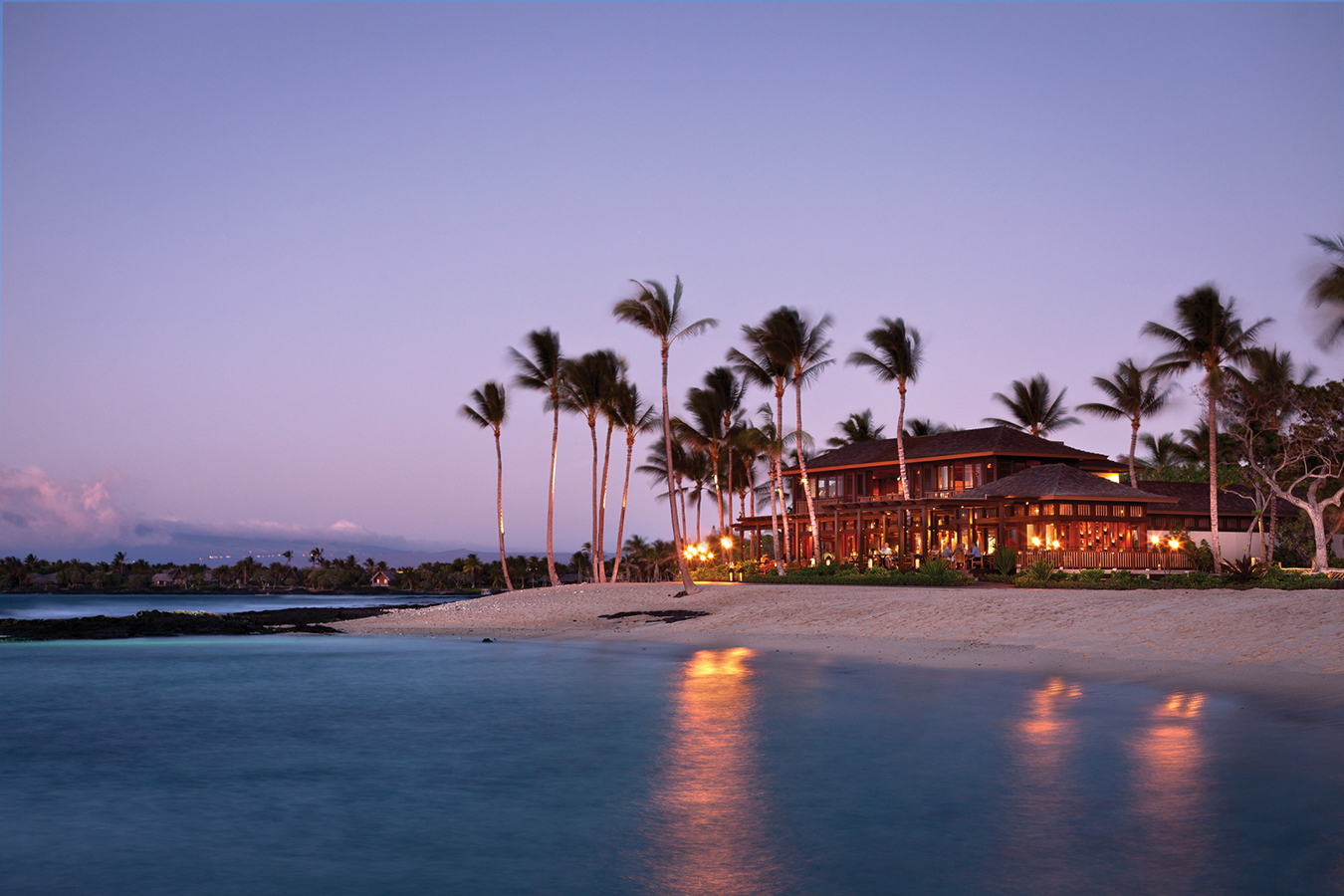 The Big Island boasts a selection of places to stay, but the one to note, in a league all of its own, is the Four Seasons Resort Hualālai. The isolated resort is understatedly gorgeous, and all 243 spacious rooms, set in low-rise bungalows, have ocean views, while the ground-floor flats have outdoor showers. The property is bordered by the dramatic volcano-rock coast; sea-water and freshwater swimming pools (seven of them), a distinctly Hawaiian spa, and a Jack Nicklaus signature golf course are all carved right into the underlying black lava.

Four Seasons has come to stand for a dignified level of service, a standard that is indisputable at this property, where the welcoming spirit of aloha abounds. Located on the Kona Kohala Coast, the showpiece resort is situated on 65 acres of meticulously manicured grounds. Try snorkelling at King’s Pond, an aquarium pool, and you’ll be swimming among thousands of tropical fish and gorgeous lava-rock formations. There are numerous attractive activities for guests ranging in age from toddlers to octogenarians; the spacious paved ocean-boarded paths are used by parents with strollers and zipping runners alike. So inviting is the sentiment of the place that it is a common sight to see the sea turtles surface and bask on the lava-rock perimeter of the ocean pool.

With such a rich, bountiful land, it is no wonder that executive chef Chris Bateman and his team are committed to a farm-to-table approach. Regional, seasonal, and artisanal are what dominate the wonderful flavour components and combinations at the property’s three full-service restaurants. And, the Hualālai Spa provides complete relaxation of soul and body, a vast footprint offering an extensive spa menu; unique is the Apothecary, a bar of ingredients that includes black lava salt, hibiscus, and crushed macadamia nuts.

There really is no better place than Hawaii’s Big Island and the Four Seasons Hualālai to play, to look, and to savour.

The Ranch at Rock Creek