I didn’t come to Peru to find a sense of spirituality. But it finds me, on the floor of the Sacred Valley. The irony pervades, but not nearly as much as the thick smoke from a burning sage smudge that fills the air around me.

Sitting cross-legged in a circle, I’m taking part in a traditional Peruvian ceremony, presided over by a shaman. Our small group is making an offering to Pachamama, Mother Earth to Andeans, and together, we scoop up handfuls of the Peruvian world around us—dried coca leaves, quinoa grains, stones, fresh flowers—like a gift we’re pooling together. All are buried with our blessing at the base of a tree in a tied-up cloth. “We are creating a package of love and we are going to put it down in the earth,” explains the shaman slowly. “And the tree will receive it.” I might not take this seriously had I not so fully experienced the land I am now thanking: Peru.

Days earlier, some 1,000 kilometres northeast of the Sacred Valley, I step off a plane in Iquitos, the largest city in the Peruvian rainforest, where humidity levels rise as travellers from Lima venture northeast and first begin to touch the rainforest, 106 metres above sea level. No roads from Lima go to remote Iquitos, only river or air travel will take you there. Curiosities like jungle potatoes grow in these parts along with more predictable bananas and beans. This is the rainforest, not the arid south most travellers to Peru are familiar with. 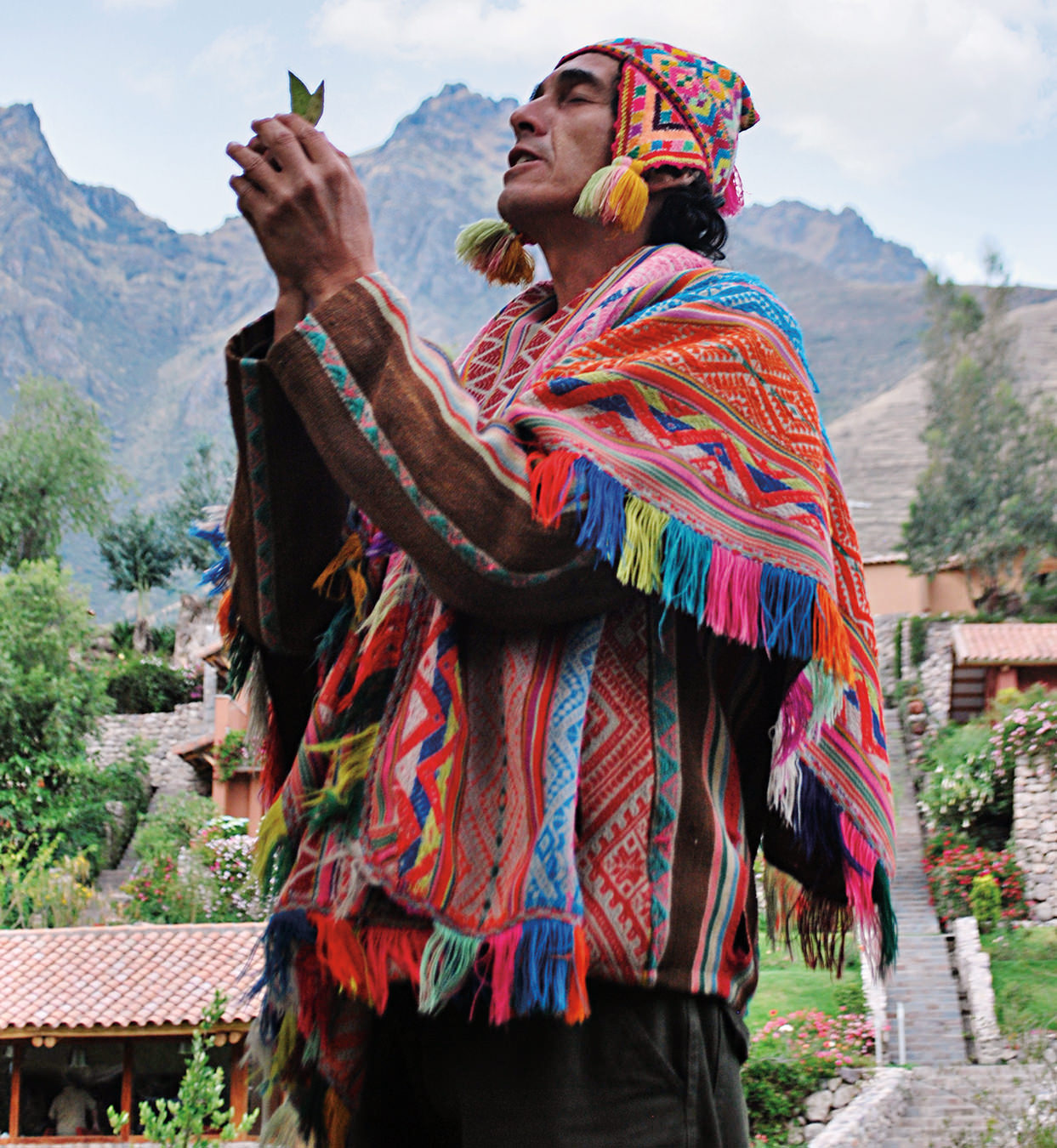 A shaman performs a traditional ceremony in Peru’s Sacred Valley.

After a few hours’ drive south, I step onto a boat in Nauta, in the thick darkness of a humid night. I’m here to cruise the headwaters of the Amazon, and this is the jumping-off point. The vessel is the 37-metre, 14-suite Lindblad Expeditions riverboat Delfin II. We set sail down the Marañón River, and awake in the early morning, awestruck at a 180-degree view in living colour: a muddy river, like chocolate milk—which hides what swims beneath—and the greenest jungle, bright in a glaze of sunshine.

The boat is rustic-luxe, finished with hardwood floors and open-air wooden hammocks and sofas ideal for sipping pisco sours. After daily excursions to the shore, clove-scented towels are handed out to revive and refresh, and each night one appears atop my bed folded into a different origami figure. Onboard cuisine is so strictly local that only the olive oil and balsamic vinegar are not sourced from the area.

The cruise route cuts through the lush Pacaya-Samiria National Reserve, the second-largest protected area in South America. At more than five million acres, it is about the size of El Salvador. Its expanse is essentially a flooded forest with two distinct seasons: high water and low water. The winding rivers can be explored from December to May during high-water season, when the river levels rise about seven metres higher than the rest of the year. Two rivers—the Ucayali in the south and the Marañón in the north—border the protected territory and eventually join forces to form the mighty Amazon that flows about 6,800 kilometres from Peru through Brazil to drain into the Atlantic.

For some 100,000 locals, the ribereños, who live in these riverside communities, life revolves around these feeder rivers. There is strong, mutual respect between the travellers, the river guides and park rangers, and the locals. The villages welcome boatloads of visitors onshore to buy their crafts; these travellers also depend on the river because it is, literally, the only way to see this part of the country.

Vicious herds of red, white, and black piranhas make up a total of 25 different piranha species that swim the expanse of the Amazon. I never thought I would try to catch them—or, for that matter, eat them for dinner.

There are enough birds here to thrill both expert birdwatchers and beginners alike: horned screamers, black-collared hawks, wattled jacanas, parrots, and six different kingfishers among them. But I’m intrigued by the river creatures that are also en route to the Amazon—if they can escape the fishermen’s nets. Over 255 species of freshwater fish live in the rivers of the reserve, and they aren’t alone. Gargantuan crocodile-like caimans slither their bodies onshore in the dark of night, and we soon encounter the fins of grey dolphins slicing through the still water around us. “If you see a frog that looks like a triangle,” our guide kindly mentions, “it’s probably an anaconda’s head.” 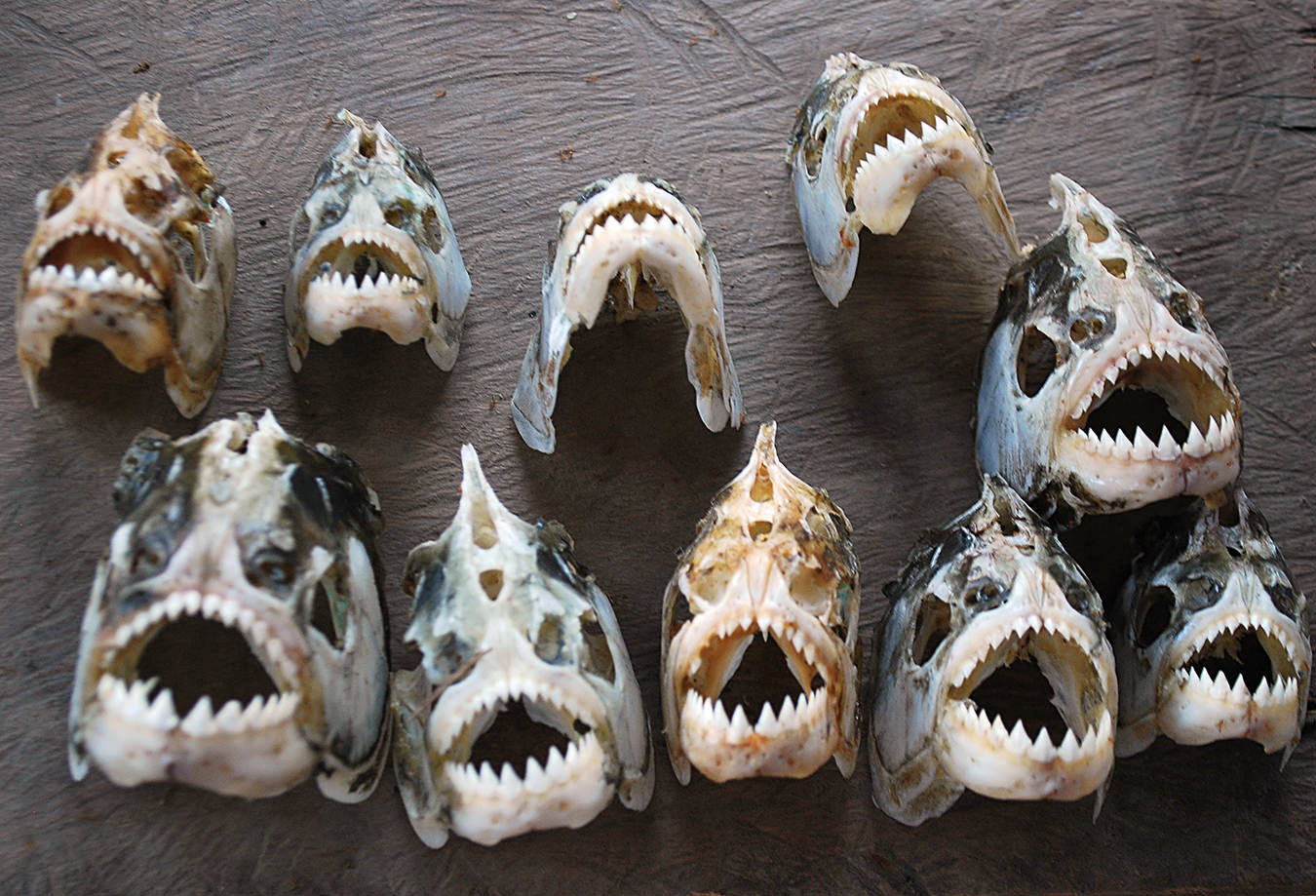 The largest fish in the Amazon also swim these waters—the giant arapaima, which can grow up to 225 kilograms. And then there are the piranhas. Vicious herds of red, white, and black piranhas make up a total of 25 different piranha species that swim between here and the end of the Amazon. I never thought I would try to catch them—or, for that matter, eat them for dinner—but one evening at dusk, we set off on skiffs for an impromptu piranha fishing trip. I flick my rod into the water with small pieces of red meat speared onto the end. Nibbles tug at the end, but the little predators make off with the meat each time. Thankfully, other boaters have success and our guides take the largest catch of the day back to the Delfin II for dinner. The roasted piranha is presented on a garnished platter like a trophy; the flesh is light, succulent, and delicious.

The jungle is a beautiful organism. It lives and breathes and drinks from the air and the rivers; rain falls on this particular jungle for 250 days out of the year. Lily pads, some reaching two metres in diameter, float in ponds. Locals have a superstition about these: eating the roots helps avoid baldness.

One evening, we go on a night ride to spot caiman, and we watch the elusive creatures slide out of the water. As they turn to glance at the oncoming boat, a flashlight beam hits them in the eyes and they become still, mesmerized and frozen in place. More active is the capybara, the largest rodent in the world, which we glimpse rushing about on the shore. Later, when the engine and floodlights are switched off for stargazing, fireflies reveal themselves against the blackness of the foliage onshore. The jungle is so full of creatures—even the trees are full of sleeping iguanas and three-toed sloths—that I’m glad my bed is on a boat.

These main rivers are not waters you want to swim in, day or night, but then again I never thought a pink dolphin would. With capillaries close to the surface of their gummy exteriors, these dolphins are actually pink and noticeably bigger than their grey counterparts. Dolphins are the masters of the water out here. Not only do the ribereños revere them, but they also don’t eat them because of powerful superstitions, including stillborn children, impotence, and blindness. (The same superstition/conservation technique keeps the sloth from being harmed—only in this case, it’s due to a fear of birthing a lazy child.)

In a skiff, down a vein of the Yanayacu river, we come to a lake and I throw all caution into the depths of the black, sediment-filled waters, and I jump in. (Our guides encourage this, and the lake is a safe place for a dip because it lies far off the main river artery.) Swimming with the dolphins is so otherworldly that I momentarily forget that anacondas live nearby. Sure enough, travelling back to the main river, a pair of men onshore call for us to dock and join them, smiles on their faces. We do, and they proudly show off an acquaintance they made that day: a live anaconda, five metres long, which slithered onto their work site from the jungle. “It’s safe,” they coax me, hanging its tail around one shoulder and placing the heavy, writhing mass around my neck. “He’s friendly.”

I don’t swim again on this voyage, but I do climb, to the highest peak of Machu Picchu. No trip to Peru is complete without walking the site’s famous stacked steps.

Any way you choose to make the trek—by foot on the 42-kilometre-long Inca trail, or by train to Aguas Calientes at the base of the mountaintop ruins followed by a short bus ride or hike to the site—virtually all travellers make a pit stop in the southeastern city of Cuzco. Once the historic capital of the Inca Empire, Cuzco now bustles with tourists. But there are sights and hidden corners that make it well worth a visit, and I quickly check off my shopping list at street stalls filled with woven alpaca socks, leaving plenty of time to explore the city itself.

Cuzco is hugged by mountains and watched over by a hilltop crucifix, Cristo Blanco. It is believed that the city was designed to look like a jaguar, with the central meeting square, Plaza de Armas, as the creature’s belly, a nearby river its spine, and the walled fortress of Sacsayhuaman its head. 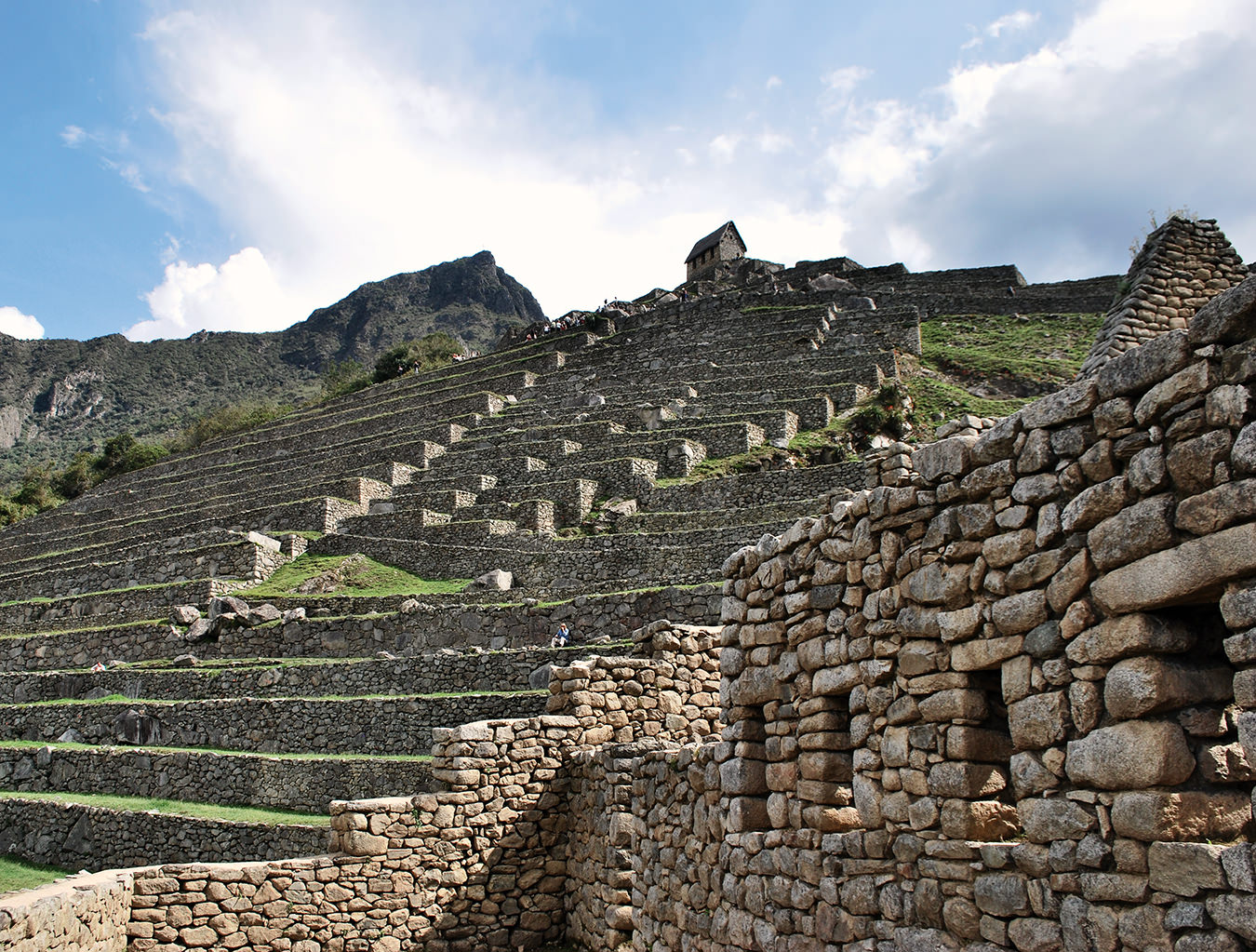 There’s no lack of churches, museums, and sacred sites along Cuzco’s narrow streets, which are easy to get lost upon. One ancient site to seek out is Qorikancha, said to have been the first building constructed by the Incans in the 10th century. When Spanish explorer and conqueror Francisco Pizarro invaded Cuzco in 1533, he and his troops came across doorways and ceilings veneered with gold plates, and a garden containing gold and silver sculptures of regional flora and fauna. Although the site is still impressive and rich with stonework, few examples of the original adornments remain in place: the conquistadores melted the precious metals down to make coins and bars.

And yet Machu Picchu itself remained untouched by the Spanish. A hundred years ago, American explorer and academic Hiram Bingham made a name for himself when, led by a group of Quechuans, he discovered the ruins for the rest of the world. The Incan remains are now a world-famous UNESCO World Heritage site, but the location was a buried treasure of sorts for Bingham when he found it covered with vegetation. Since then, las ruinas that we know today are about 70 per cent original, while the remaining 30 per cent has been restored throughout the years by archeologists. “If the Spanish got here before, believe me, we would be visiting cathedrals, not ruins,” a guide comments as we walk up to the site.

To get to here I have chosen, perhaps, the easiest route: a fast train with a view, direct from Cuzco. But no matter how you get to Machu Picchu the journey culminates in a walk along a narrow path and out onto the first sweeping view of the ruins. I’m dwarfed by the immense mountains that surround on all sides and the plummeting cliffs below. The vista is dizzying, dramatic, and unexpected. After a few hours of exploration, clouds start to roll in and I stand above them.

This view, and the journey that has preceded it, is why I join the shaman in giving thanks to Pachamama. It is impossible to have stood upon a peak of 550-year-old ruins, reflect on the history of a civilization, and not be moved by it. It is a site with mysticism built into its very core—and its country is much the same. On The Road in Maui