You wouldn’t know by looking at it, but the citron has a rich, varied history. On first glance, it looks like a bumpy lemon—and you might be surprised to find out that it’s considered the ancestor of all citrus fruits, and may in fact be the “apple” that ended Adam and Eve’s idyll in the Garden of Eden.

Since ancient times, people have found the fruit (usually when mixed with wine) to be an effective antidote to poison. But its apparent curative properties aren’t its only tie to the ancient world. David Wiseman, owner of the Zaide Reuven’s Esrog Farm in Dallas, Texas, explains, “The citron symbolizes immortality because, unlike other fruits, it blossoms and sets fruit throughout the year. Once ripe, the fruit doesn’t fall off the tree but maintains its vitality until picking time.”

Little known in North America, the citron has oil-rich skin protecting a thick, pectin-rich, white pith that surrounds sparse, seedy juice segments. These finicky fruits grow on thorny trees that only live about 15 years. They thrive in the Mediterranean on the islands of Naxos, Corfu, and Crete in Greece; in Tunisia and Western Morocco; along the Riviera dei Cedri (the western Italian coast of Campania and Calabria); and on Corsica. The fragrant citron is used to flavour veal and pork roasts, fresh cheeses, baked fruit tarts, gelato, panettone, Sicilian layered cassata, and the ricotta cheese filling for crunchy cannoli. 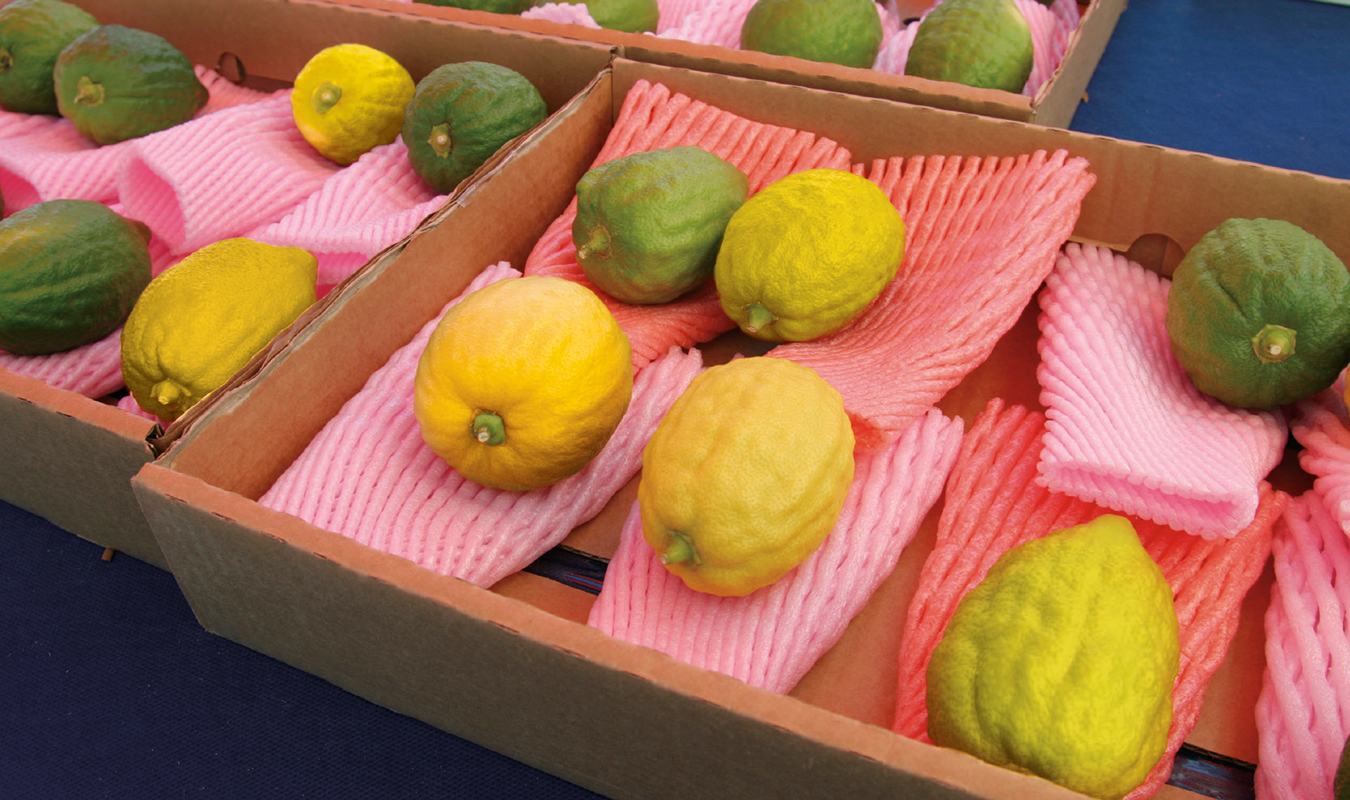 Citrons have a rich history in many parts of the world. The Torah directs Jews to celebrate the Feast of Tabernacles, the fall harvest holiday, with the esrog or etrog (Hebrew for citron), and branches of willow, palm, and myrtle. After the conquest of Israel in AD 72, citrons became a symbol of Jewish resistance to Roman rule, and their image appeared on coins and in mosaics. One week a year for at least two millennia, Jews worldwide have sought out unblemished esrogs—the progeny of ungrafted trees—to fulfill the Biblical commandment. The more perfect the fruit and the more pleasing its shape, the higher its price. Only about one in 10 fruits will make the cut, but growing citrons is profitable because each fruit is worth about $25; those closest to perfection can sell for as much as $1,000.

Buddhists and Hindus also venerate the citron, perhaps because of this rare fruit’s primordial origins and heady fragrance. In India, the Hindu god of wealth, Kuvera, often grasps a jewel-adorned mongoose in one hand and a golden citron in the other. In China and Japan, citrons (specifically the Buddha’s Hand variety) are a symbol of happiness and prosperity often placed on household altars, giving rooms a pleasant fragrance—and as an added bonus, they prevent moths.

On the Greek island of Naxos, the Markos G. Vallindras Company has been distilling Kitron citron liqueur since 1896, using leaves collected each October from the notably thorny trees. Nardini distillery in Bassano del Grappa, Italy, has produced its Liquore Acqua di Cedro, known as “the noble cousin of limoncello”, for more than 225 years.

The time-honoured method of candying the fruit begins with soaking unripe fruit halves in seawater for softening, then simmering them in successively more concentrated baths of sugar syrup. Except for a tiny but burgeoning artisanal movement, they are industrially cured in the same factories that produce neon-coloured maraschino cherries.

Food, drink, and immortality aside, another way to enjoy the fleeting, yet enchanting aroma of citron blossoms is to dab on the unisex fragrance Eau de Fleurs de Cédrat, created by the House of Guerlain in 1920.

Worth trying in any form, citrons are a rare and revered fruit.