In the world of Ferrari, the cars and technology change, but the passion for performance always remains. And it comes through in ways subtle, and not so subtle.

“We first wanted to introduce the California actually in the state of California—but we wanted to make sure that you could push the car, and really feel what it can do,” explained chairman of Ferrari (and parent company Fiat) Luca di Montezemolo at the international launch of the new Ferrari California in sun-drenched Southern Italy. “Here in Sicily, we don’t have to worry about tickets.”

So while the traditional Ferrari focus on performance still lives and breathes both on the race track and in corporate activities, the California convertible ushers in a new era in Ferrari history by taking a bold step in a more city-friendly but still very exciting direction. This means the Cali continues to immerse its driver in Italian driving passion, yet becomes more comfortable, more roomy, and more fuel efficient—and it brings more technologically advanced convenience items, instead of preserving the high-tech dollars strictly for the go-fast underhood bits.

Thus the Ferrari California becomes the famous Italian exotic car brand’s first car to feature a retractable hard top, the first with a seven-speed dual clutch transmission, and the first to offer a front-mounted V-8 engine, which helps keep the weight low and centred for better handling. 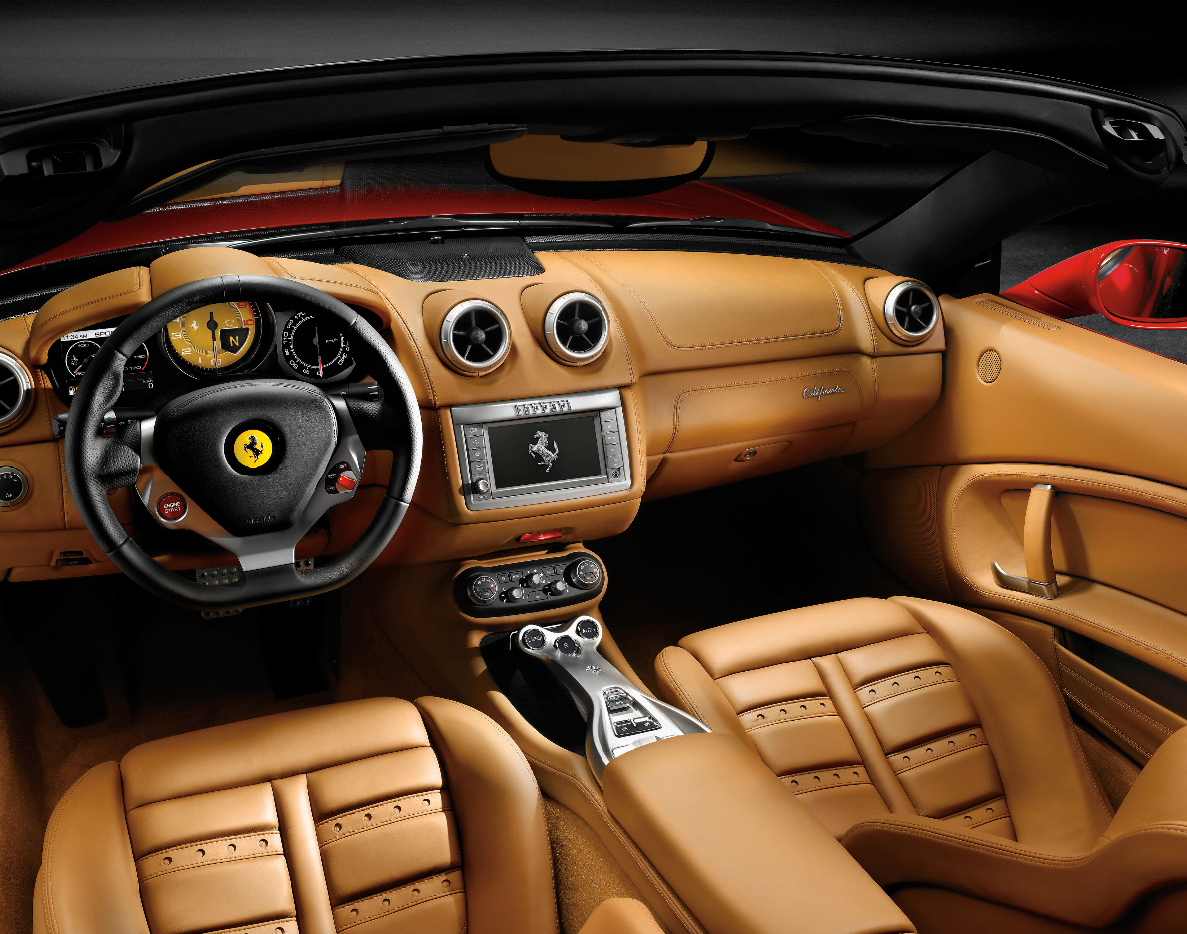 A small Ferrari with a practical streak? Seems strange, but it’s true, inasmuch as any two-door, two-seat convertible sports car with a small rear bench can be considered practical.

Ferrari folks concede that the California is the first car they have designed with the goal of reducing its engine’s appetite for fuel—which is a surprising admission, even from a boutique exotic carmaker. Sure, Ferrari is not going to save the planet with the still-thirsty California V-8 roadster. But with a much more efficient drive train that has the same or better acceleration thrust as its F430 hard-core V-8 sports car, it shows that Ferrari is at least moving in a more environmentally responsible direction, a shift that’s sure to accelerate in the next decade.

Yet to be a Ferrari, first and foremost it has to provide driving thrills and a soul-gripping emotional appeal. A day spent lashing the California around mountain curves and through gloriously echoing tunnels on the western coast of Sicily proves that there are distinct personality differences from its similarly priced and universally admired F430 sibling, especially once the pace slows down.

When you’re talking high-end exotic cars such as these, much of the appeal begins and ends with its shape. The California was designed by the Italian design house Pininfarina, and not to universal praise—its relatively large rear end, needed to house that folding hard top, is a touch too prominent for some. Spot it on the road, however, and the quieter sophistication of its sporting lines seem tame by Ferrari standards, but still sensuously alluring. Think body-hugging sexy as opposed to chest-bearing dramatic.

The California may not exude the look-at-me drama of other models, but this is a new breed of Ferrari, one that doesn’t have to shout its performance credentials.

It may not exude the look-at-me drama of a mid-engine car that proudly displays its red-tinged engine as a piece of rolling art in its rear window, but the Cali’s quieter visual statement is that this is a new breed of Ferrari, one that doesn’t have to shout its performance credentials.

The California’s design has obviously struck a chord; production for the $262,000 grand tourer for the first two years is already sold out. For the California’s Canadian debut this past May at the opening of a brand new Ferrari dealership in the north end of Toronto (now the brand’s largest by size in North America), Ferrari Maserati of Ontario owner and president Remo Ferri raised $50,000 for the SickKids Foundation by auctioning off the rights to the first California in the country. 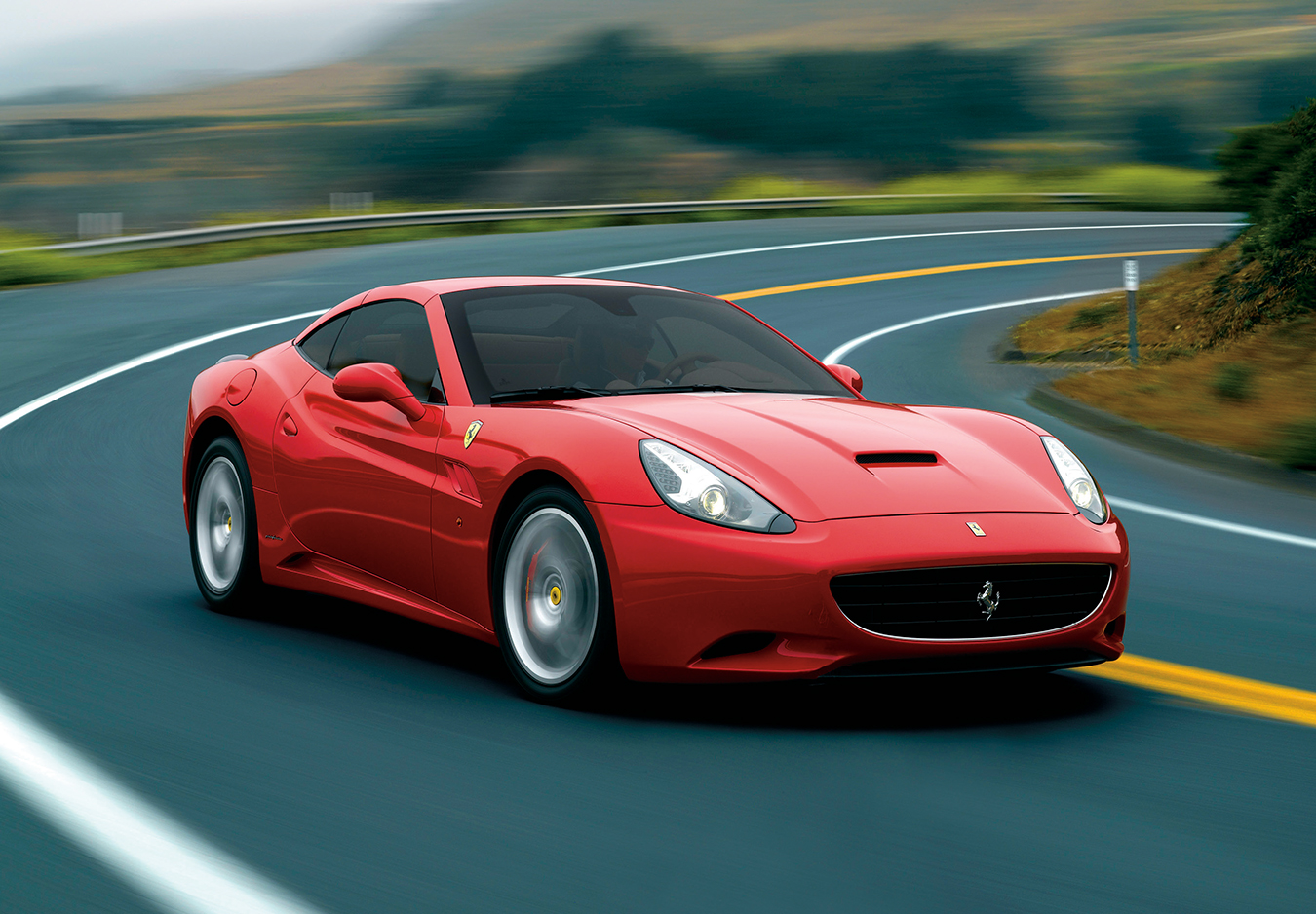 The cars arrived in North America in early summer, a year after the very first production California rolled off the line in Maranello, Ferrari’s home town and a mecca for Italian sports car enthusiasts around the world. (It is, however, an exclusive mecca; enthusiasts must be lucky enough to be invited by Ferrari, as there are no public tours of the factory grounds.)

The California’s inauguration in Maranello not only celebrated an all-new model, but a new factory building as well, designed by acclaimed French architect Jean Nouvel. After winning the Pritzker Architecture Prize in 2008, Nouvel became the second starchitect to unveil works at Ferrari’s headquarters and receive the Pritzker in the same year, after Renzo Piano’s iconic wind tunnel (or galleria del vento) was unveiled in 1998. Both facilities are part of a larger plan to inspire Ferrari’s passion for racing and its products in its workers, and by some pricey osmosis, in its customers as well.

Ferrari calls this their Formula Uomo plan, and over the last 12 years the company has spent more than €200-million to build seven aggressively styled buildings as architectural expressions of the brand. The increased aesthetic, environmental, and worker appeal of these facilities has apparently been well received, as the Maranello site was judged to be the best place to work in Europe by the Financial Times in 2007. 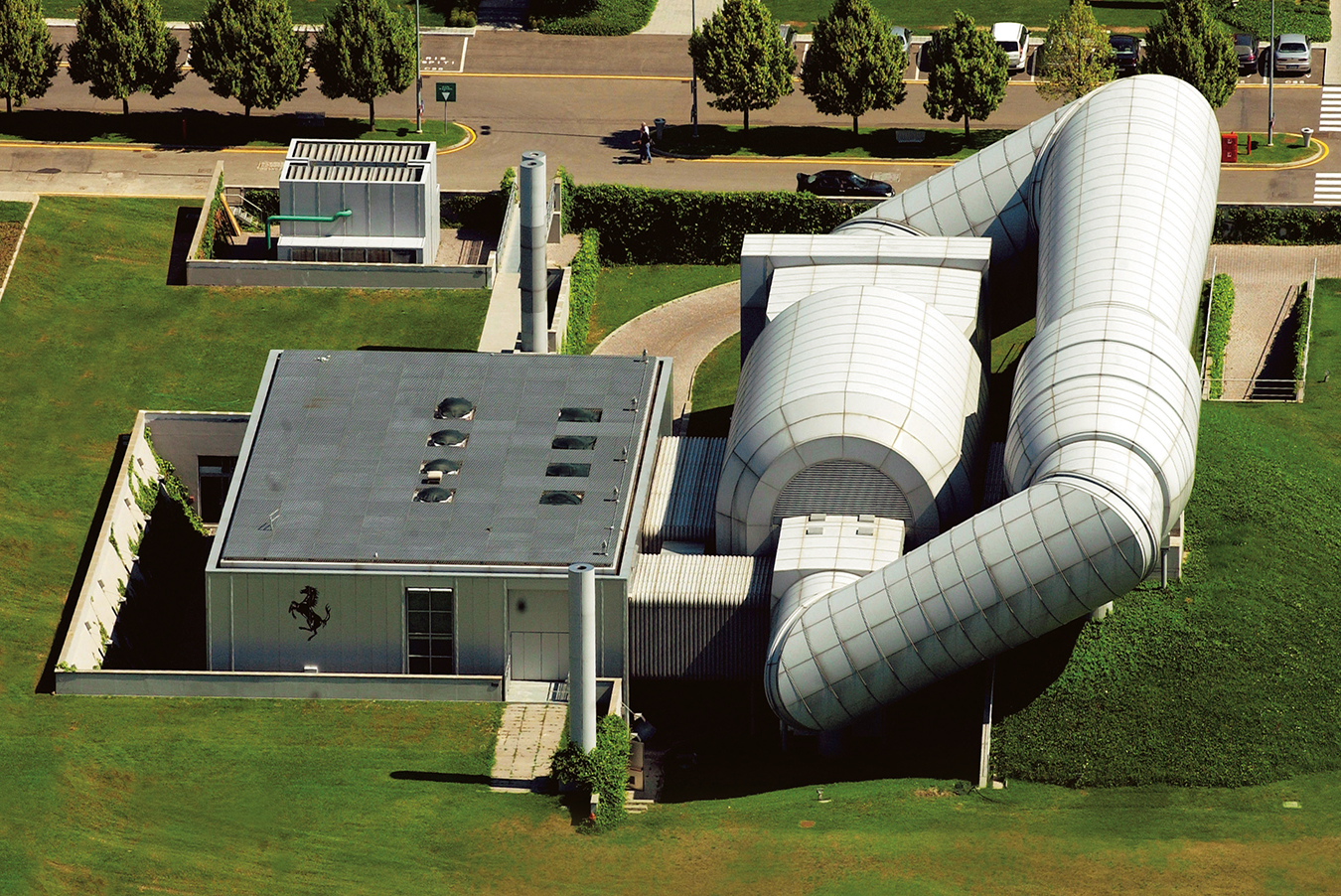 It’s not just the architectural showpieces that impress workers and visiting customers alike, but the overall sense of history and pride that permeates the entire Ferrari village. And it really does resemble a village. Greenery lines the facility’s boulevards, benches and tables are sprinkled throughout, and the parking posts are decorated with a silhouetted prancing horse. Ferrari bicycles are available for workers to cross the campus, and each avenue is named after one of its Formula One driving champions—except for one, the main street, Viale Enzo Ferrari, which honours the founder of it all.

Just outside the factory’s main gates, torso-sized Ferrari emblems adorn the carved stonework and speak to the pride in the Ferrari name. Its powerful cultural influence has woven itself into the fabric of Italian national identity. Ferrari has unquestionably stoked the country’s reputation for high fashion, pulse-pounding performance, and sleek silhouettes, as Ferrari itself has been shaped by the culture of its birth.

In Nouvel’s new building, from which the California and eventually all Ferraris will emerge, reflective plates hang from the ceiling in a way that increases the natural light from the clear roof. Each plate bears part of a large Ferrari prancing horse insignia, visible from the factory floor as well as from visiting helicopters above.

Over the last 12 years, Ferrari has spent more than €200-million to build seven aggressively styled buildings in the company’s home town of Maranello as architectural expressions of the brand.

Even the company restaurant building, which also opened last year, is an architectural marvel. Shaped to mimic a Formula One car’s rear wing, it forms one of the magnifici sette structures. You’d have to search long and hard around the world to find a company so proud of their corporate cafeteria.

And that Maranello pride fully extends to its latest vehicular offering. Yet there are some who wonder if the California, a car that offers the same front engine, rear wheel-drive layout of so many other luxury coupes and convertibles, can truly be different enough to be a real Ferrari; whether a car endowed with USB and iPod connectors for music, Bluetooth phone connectivity, stereo controls on the back of the steering wheel, satellite navigation system, heated seats, and an optional back-up camera can be anything but a coddling and overweight sports car impersonator. 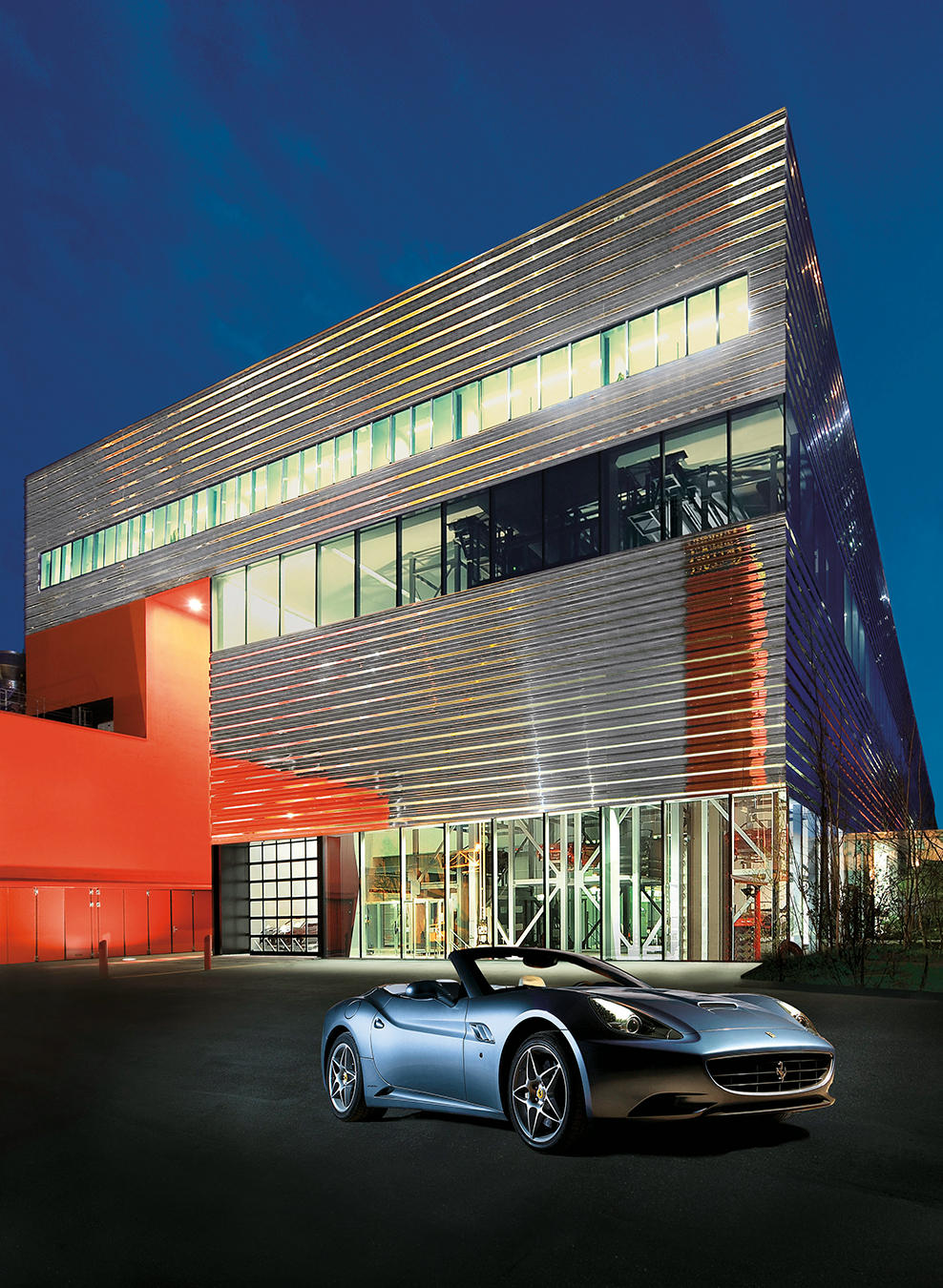 One heavy lunge on the throttle will convince any doubters that the true Ferrari passion still breathes in the California. The 4.3-litre V-8 produces a finely tuned mechanical opera that sings to you while it slams you back into the seat. The new engine gives a throaty, deep-voiced roar at low rpm, while the familiar Ferrari shriek takes over when you’re pushing up close to its glorious 8,000 rpm crescendo.

At its peak, this engine makes 453 horsepower and 357 foot-pounds of torque, while returning a combined city-highway fuel consumption of 13.1 litres per 100 kilometres; this is in part due to new direct-injection technology and the more advanced dual-clutch, paddle-shifted, seven-speed transmission. On top of a smooth automatic mode, the bane of previous clutchless manuals, this transmission flips up or down gears with the authority of a drill sergeant, and expertly blips the throttle on downshifts smoothly and more consistently than even Kimi could manage. 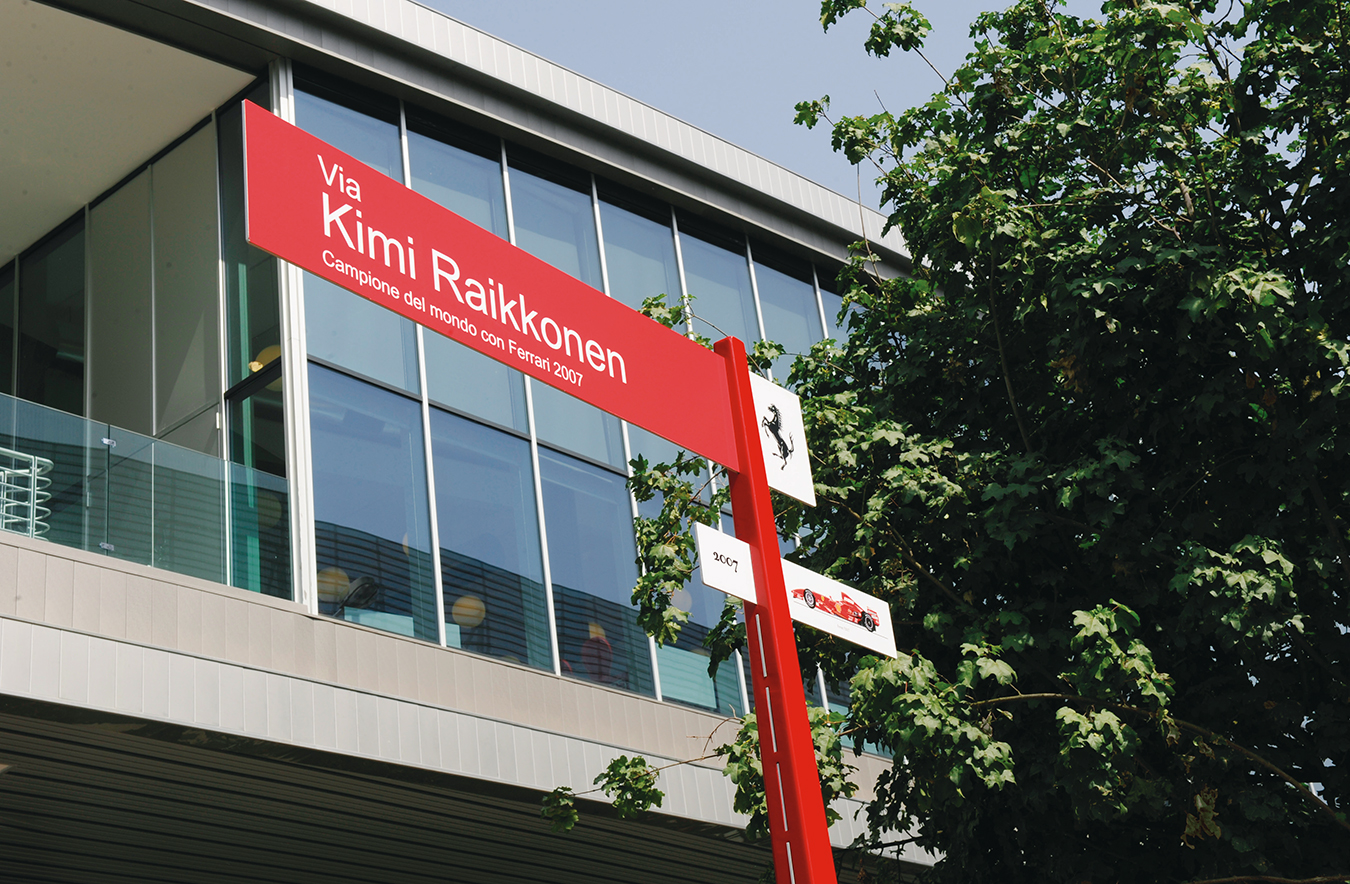 Ferrari says a full-on 0–100 km/h run takes a blink less than four seconds, putting it right in line with the F430 coupe, despite the Cali’s heftier weight. Ferrari claims a top speed of 310 km/h, with the speedometer suggesting 340 (neither of which even Sicilian law enforcement could overlook on public roads).

So while the performance can be anything but subtle, it’s the California’s ability to switch its personality so easily from thrill ride to chill ride that makes it truly remarkable. Ferrari has not simply thrown luxuries at its no-compromises drop top, it has engineered an all-new chapter in company history, designed to expand the Ferrari family while staying true to its performance core.