At this writing, I am in a state of deprivation, having just begun the South Beach Diet. Spring comes, and with it, the horror of having to appear underdressed in public, and corpulent men who spend their days sitting begin to think of extreme measures. I am in the most austere phase of the diet, known quaintly as “Phase One”, but which could properly be called “Turkish Prison”, except there is no bread. I am an abomination of nature, all of which adores chocolate, croissants, and party-sized pizzas covered in meat and cheese. Such is the penalty for living in a clime where one can hide inside a parka for six months of the year.

All of this, however, makes me an excellent candidate to write about food this month, as I can bring to it the proper grief and nostalgia befitting a glance back at a cherished time. Food is childhood, comfort, the scent of home. It is the offering transubstantiated in the machines of our bodies that makes us who we are. Who are you? Lean meats and green vegetables? Pastas and chilies? Luncheon loafs and tinfoil? I am fat, hence my predicament. But today, a buffet.

Chefs seem to be one of two types: ravers or philosophers. In the former category, you get every celebrity chef who ever lived: the Marco Pierre Whites, the Mario Batalis, the Gordon Ramsays, the Anthony Bourdains. This last has written a number of books detailing his wild days in various American kitchens, and his first memoir, Kitchen Confidential: Adventures in the Culinary Underbelly supposedly blew the lid off of the proverbial pot. Which called the kettle black, among other unseemly things. Anyone who might have thought that a busy kitchen was a well-oiled machine learned differently from Bourdain’s tell-all, which among other things, revealed that you should never eat fish on a Monday, and that if you’re a fan of eggs benny, you’re the most hated kind of restaurant-goer there is. The shaggy, stoned, neurotic and lonesome collection of people who cook your restaurant meals are exactly the kind of people you don’t want touching your food. But as Bourdain tells it, the unlikely transformation of a storeroom of week-old vegetables and mouldering fish into high culinary art is more a strange act of communion than it is an art. There is art involved (especially when it comes to timing), but the true wonder of a good kitchen is how so many angry, exhausted people manage to create a meal in a space smaller than a Cessna cockpit.

It’s an outsider’s look, however, that reveals most about the workings of a professional kitchen. Enter Bill Buford, the ex-editor of Granta, and his unusual descent into the world of restaurants through his friend, Mario Batali, the clog-wearing, ubiquitous television chef, and co-owner of some of New York’s most celebrated restaurants. Buford’s memoir, Heat, tells of how he became Batali’s kitchen slave, and how this rite of fire (and humiliation) lead him to transform himself into a near-professional cook. Buford’s odyssey began, strangely enough, at a dinner party in his apartment, when Batali had been invited along as a friend of a friend. Within minutes of arriving, and declaring the cookery inept (“ … only a moron would let his meat rest by wrapping it in foil after cooking it …”) Batali took over the evening. It began with him distributing paper-thin slices of raw pig fat—lardo—from pigs raised by Batali himself and fattened to within an inch of their lives. Describing the fat as “the best song sung in the key of pig”, Batali proceeded to lay the melting slices on the guests’ tongues, and Buford writes, “by the time Mario had persuaded us to a third helping, everyone’s heart was racing.”

After meeting Batali, Buford convinces him to take him on as an unpaid kitchen Boy Friday. The tale of Buford’s experiences in Batali’s kitchen keeps the heart racing, as he learns all of the stations, burns and cuts himself on almost every exposed surface, and sees how a professional restaurant actually works. The men in Batali’s kitchen are a motley lot to say the least. Knives strapped to their waists, their arms and fingers bandaged in peeling gauze, they look upon their new “extern” as a burden on them, and he is. Buford doesn’t have his own knives. He doesn’t dice properly. He drops things. But eventually, he begins to fit in. Gina, the dessert chef (accorded special respect, like a goalie) works in a space all her own and shovels cake in Buford’s mouth for his opinion. The place is a shambles, but it works. And Buford finally catches on. One of the many joys of this book is the many little secrets he imparts to the reader. You probably already know to put your cooked pasta into the sauce and to cook it a while longer, but you may not know that a cardinal sin with pasta is to drain, or worse, to rinse it. You just take it out of its water, still dripping, and dump it right into the sauce. The starch clinging to the pasta binds the sauce to the noodles and thickens it too. 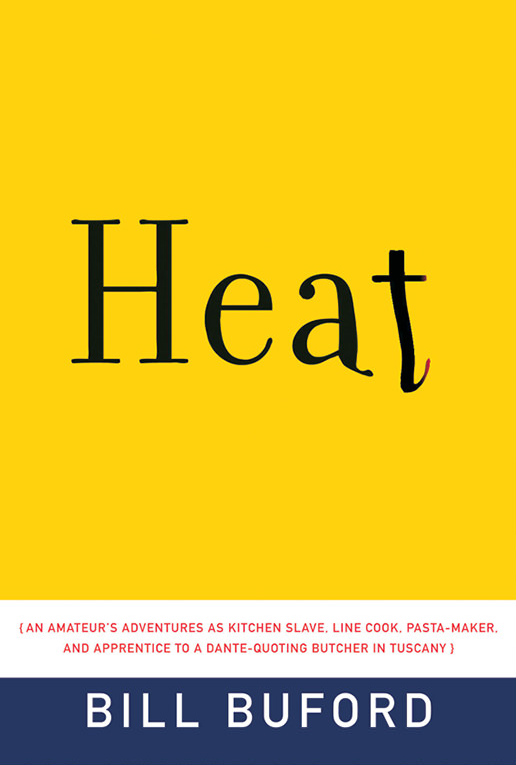 After his Batali rite of passage, Buford begins to seek out his own education. He goes to Italy and learns to make pasta at the same small restaurant in Poretta that Batali trained at. Then, conquering pasta (a French invention of all things! But it wasn’t true pasta until the Italians decided to add an egg to the flour), Buford decides he has to learn meat. The sections of Heat dedicated to his apprenticeship under the Maestro of Panzano, Dario Cecchini, a singing, Dante-quoting madman, are pure delight. Cecchini, who is known as the master butcher of Chianti, puts Buford through meat boot-camp. He makes soppressata, a meaty pork salami that requires the boiling and stuffing of every imaginable part of the pig. It takes all day, and by the time he’s done, everyone is slipping on the rendered fat that coats the floor. He eats with Cecchini, learning the local ways. And then the Maestro gives him his graduation present: he’s to bone an entire pig. I doubt you could do it after reading the description, but Buford eventually passes with flying colours.

Heat is a great book about food, written by a man who becomes obsessed with its history and its secrets. When Buford returns to New York, he actually buys a whole pig for himself, determined to return to the roots of food right in his Manhattan apartment. He butchers it as he’s been trained, cooks the cuts the ways he’s learned, and treats his wife and friends to many months of pork. He may still be eating it. 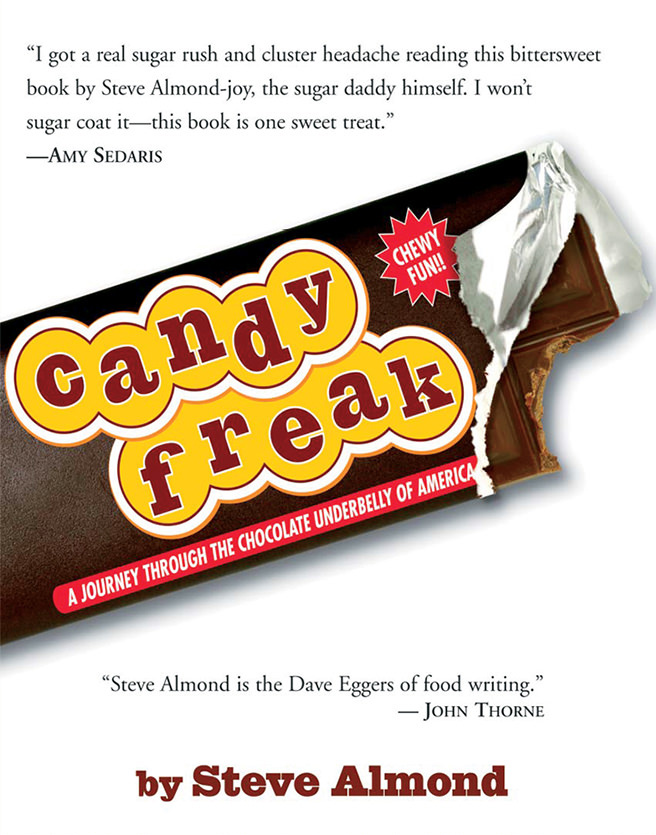 From the macro to the micro, from high art to low: Steve Almond’s book Candy Freak is a heartfelt paean to candy, especially those lost candies from your childhood, the Twin Bing, the Idaho Spud, the Goo Goo Cluster, Caravelle. America’s candy used to be produced by hundreds of small, regional candy makers, but with “developments” in retail and national marketing, most of the candy North America eats comes from “the big three”: Hershey’s, Nestlé, and Mars. With placement (“racking”) costs in the chains exorbitant, smaller factories can only sell locally, or they simply vanish. Almond’s quest in Candy Freak is to find some of the last holdouts in American candy, and to eat as much candy as he possibly can in the process. Thus, he takes us to the makers of Five Star Bars, a chocolate outfit called Lake Champlain Chocolates in Burlington, Vermont. But first, he treats us to a Five Star Caramel bar: “There was caramel, obviously, but also roasted almonds and nuggets of dark chocolate. It was draped in a thin layer of milk chocolate. The interplay of tastes and textures was remarkable: the teeth broke through the milky chocolate shell, sailed through the mild caramel, only to encounter the smoky crunch of the almonds, and finally, the rich tumescence of the dark chocolate. You almost never see milk and dark chocolate commingled, but the effect in this bar was striking: The sweetness of the milk chocolate rushed across the tongue, played against the musky crunch of the nut, then faded. The bite finished with an intense burst of dark chocolate, softened by the buttery dissolution of caramel. What I mean here: there was a temporal aspect to the bar, a sense of evanescence and persistence.” Freak, indeed. And the guy looks like he weighs 110 pounds too.

This is a nostalgic book, and the reminder of all those lost candies can trigger profound memories. Pop Rocks! We hardly knew ye! Velomilks, where have you gone? I went to one of the websites in the appendix, Steve Traino’s rare candy site, www.candydirect.com, and encountered once again the beloved tooth-rotters of my childhood. Adams Sour Apple Gum! I can still smell it. Mallo Cups and Bit-O-Honey! French Chew Taffy! All this inspired me to go online and see if I could find my favourite childhood cookie, Chew Chews, a chocolate fudge, caramel, coconut wafer cookie that my mother only bought once in a while because it was expensive. But no luck … they’re gone forever. But Almond can bring back his own sugar rushes, and it’s worth it, although the cravings the book triggers are not to be believed. I can hardly wait for Phase Four of South Beach: The Chocolate Phase. “The Breathless Zoo” by Rachel Poliquin