Gort Scott Architects is not necessarily known for world-stirring private residences. The firm, led by founders Jay Gort and Fiona Scott, has been noted recently for tasteful low-rises built of stone as contemporary takes on International Style. The Rock is Gort Scott’s break into statement single-family residences, and the Whistler home, made from a design selected via competition, is stunning. 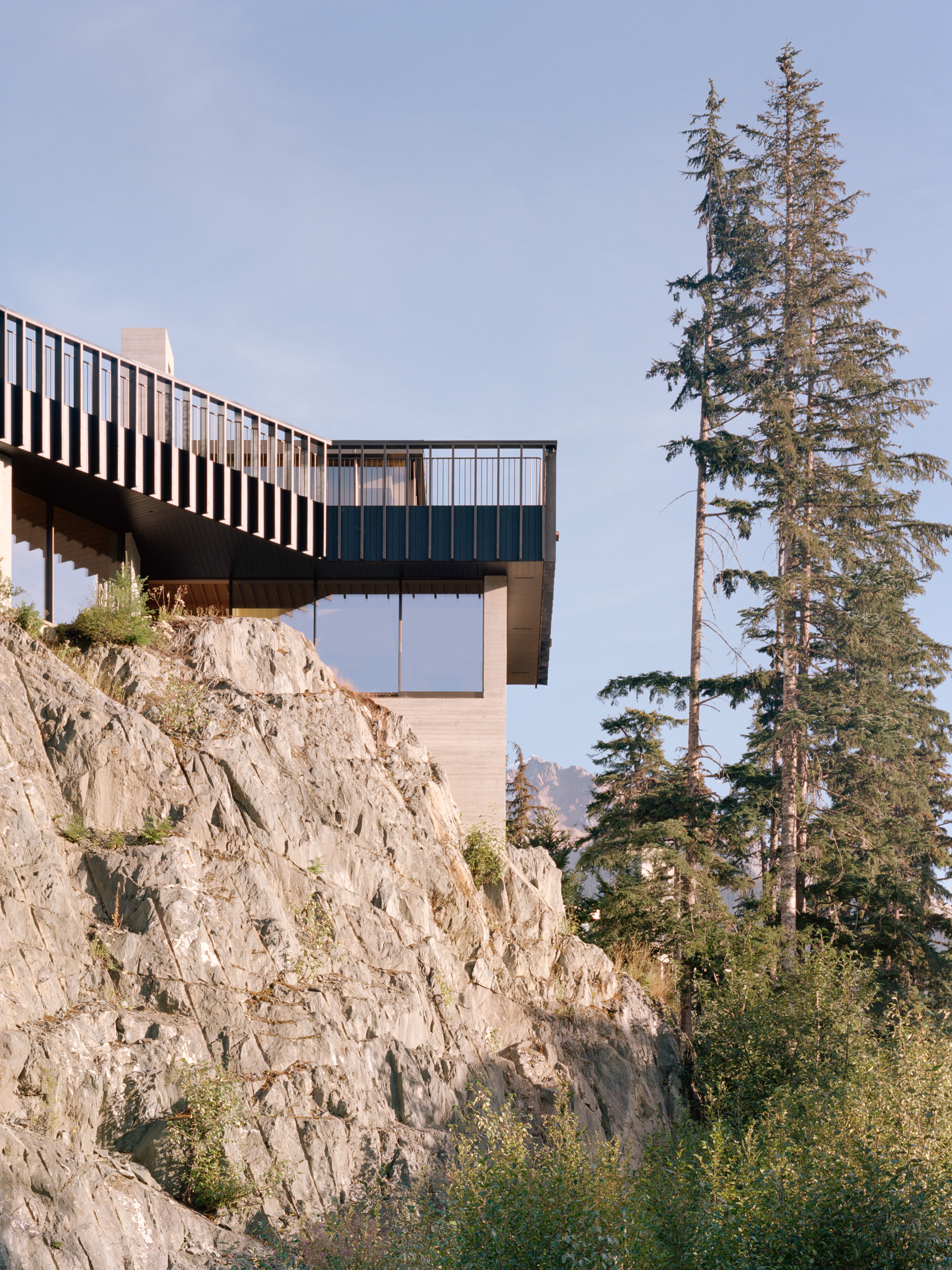 The design takes aspects of brutalism, high modernism, and West Coast passive houses and combines them into a sprawling residence oriented by three concrete chimneys that look like brutalist spires. From a distance, the palatial home overlooking Alta Lake appears to be growing out of the extrusive volcanic rock. Black wooden louvres frame the accessible rooftop, which is covered in gravel and green areas that further integrate the structure with the environment and significantly expands the square footage of the living space. The wood here is local cedar, the majority of which was saved from a forest fire and has been painted with a black wood stain. 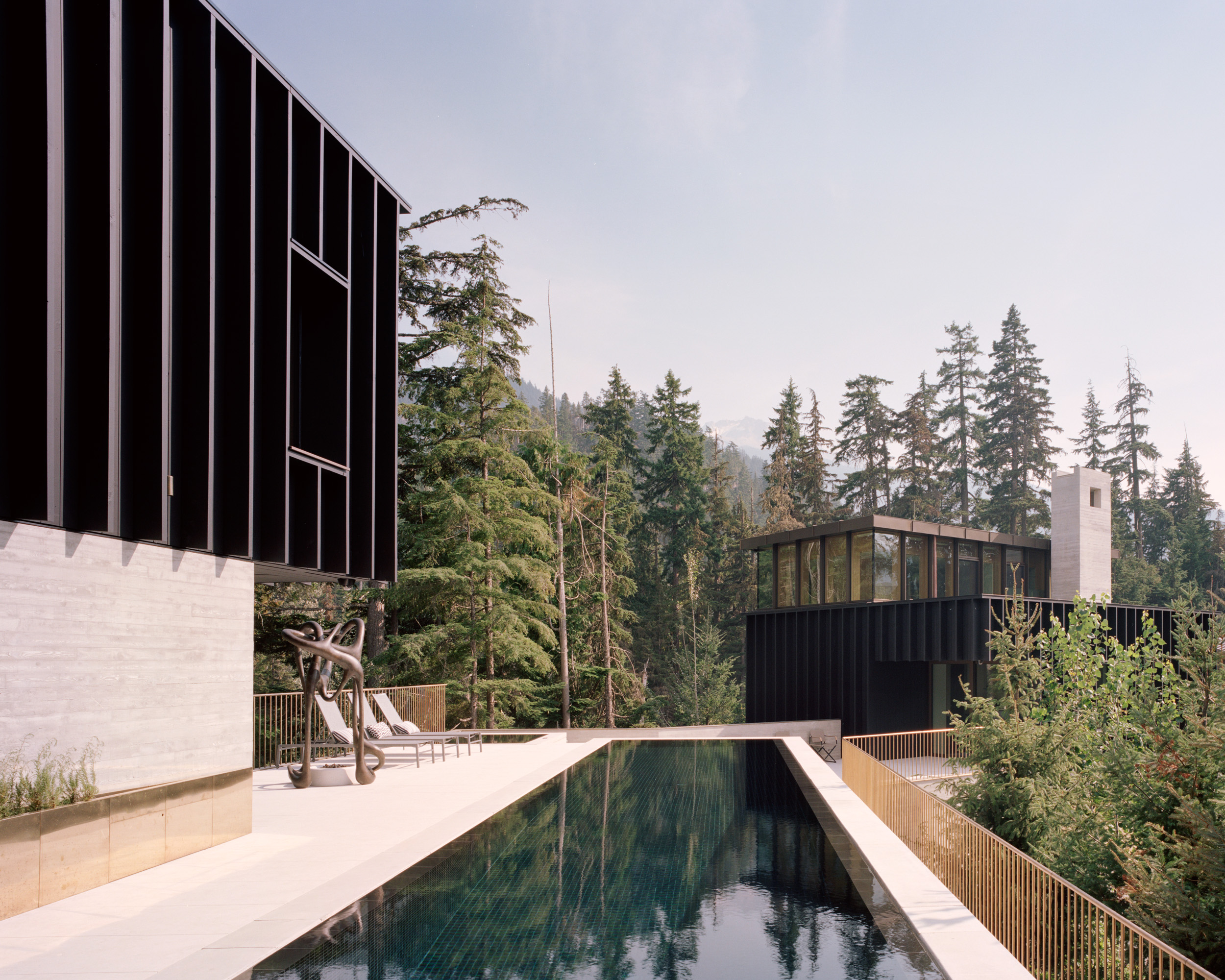 Pagoda-like glass atriums emerge from the top of the three primary structures, providing generous views of Alta Lake below and the densely wooded mountains that surround. A toned-done lap pool sits in the stretch of concrete that connects the main house with the garage and guest house. 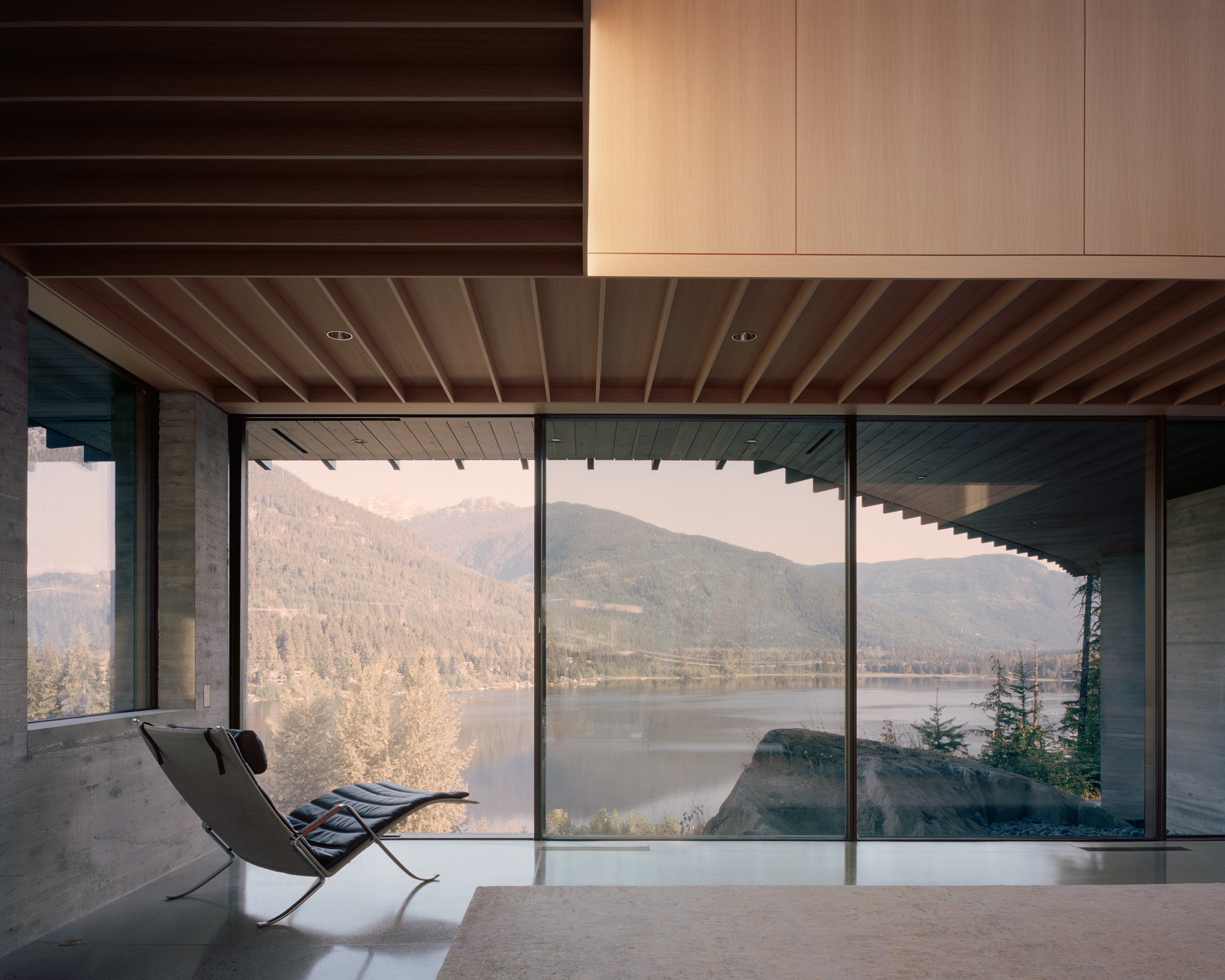 To fully experience this 10,000-square-foot home is comparable to climbing the mountain it rests on. Complexes of stairs, hallways, and slopes lead from the lofty heights of the upstairs to the almost dungeon-like reaches below. 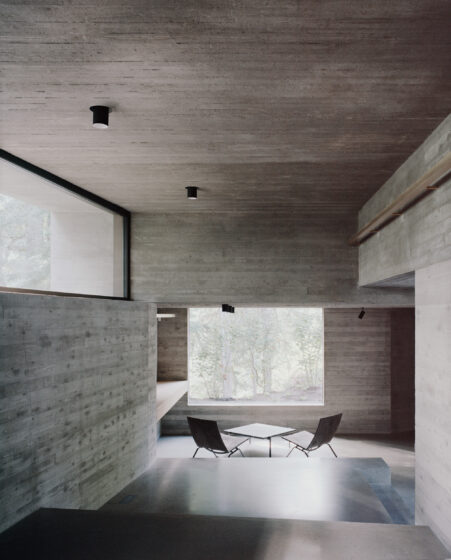 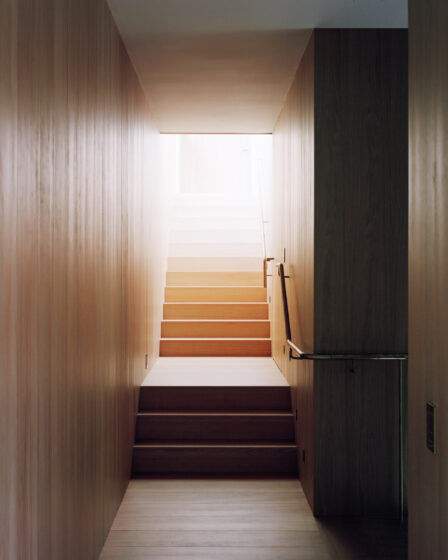 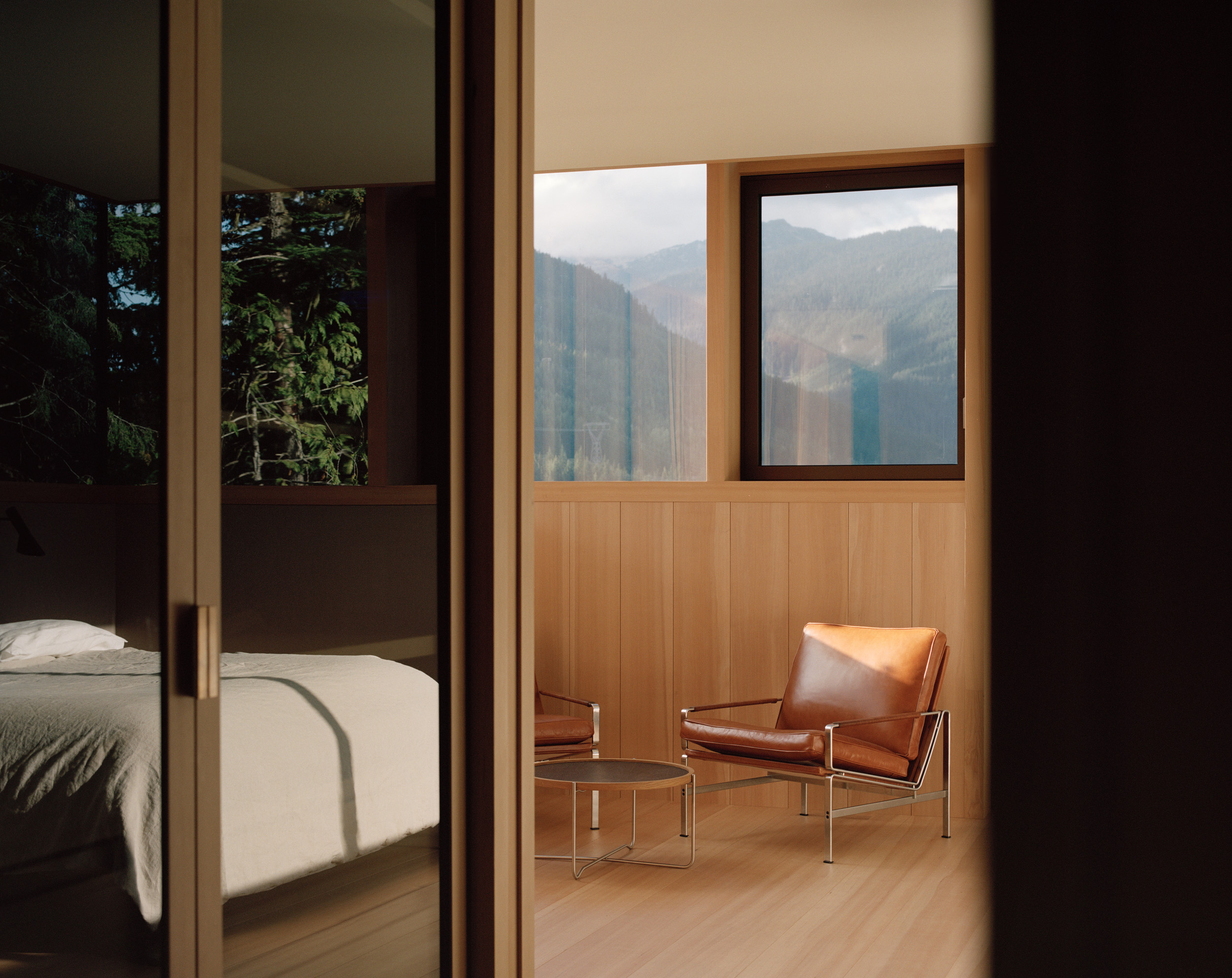 Lounge chair FK 6720 by Fabricicius and Kastholm, 1965 for Kill International.

Two (sometimes competing) architectural design themes dominate the interior. A staid brutalism flirts with airy woods, with the percentage of both varying from room to room, as if a dualism is playing out in the materials. Some rooms are all wood, while others are made completely of concrete. The two themes connect dramatically in the primary living spaces. Here, the wood meets the concrete in a slightly sloped series of levels connected by short staircases and gold-tone handrails. Light plays off the intricately lined wooden louvred ceiling punctuated by skylights. The ceiling, walls, and columnal fireplace are constructed completely from smooth concrete.

This multi-tiered living area is one of the defining rooms of the home.

Together, the soft and hard materials are not incompatible. If you spend enough time in the house with its various moods, you get the sense that the juxtaposition is not binary but more akin to the different layers of sedimentary rock, as if the house were a geological record of the emotionally dense layers of the home and its inhabitants. A complicated look at time and pressure is expressed in the structure like the rock for which it’s named. 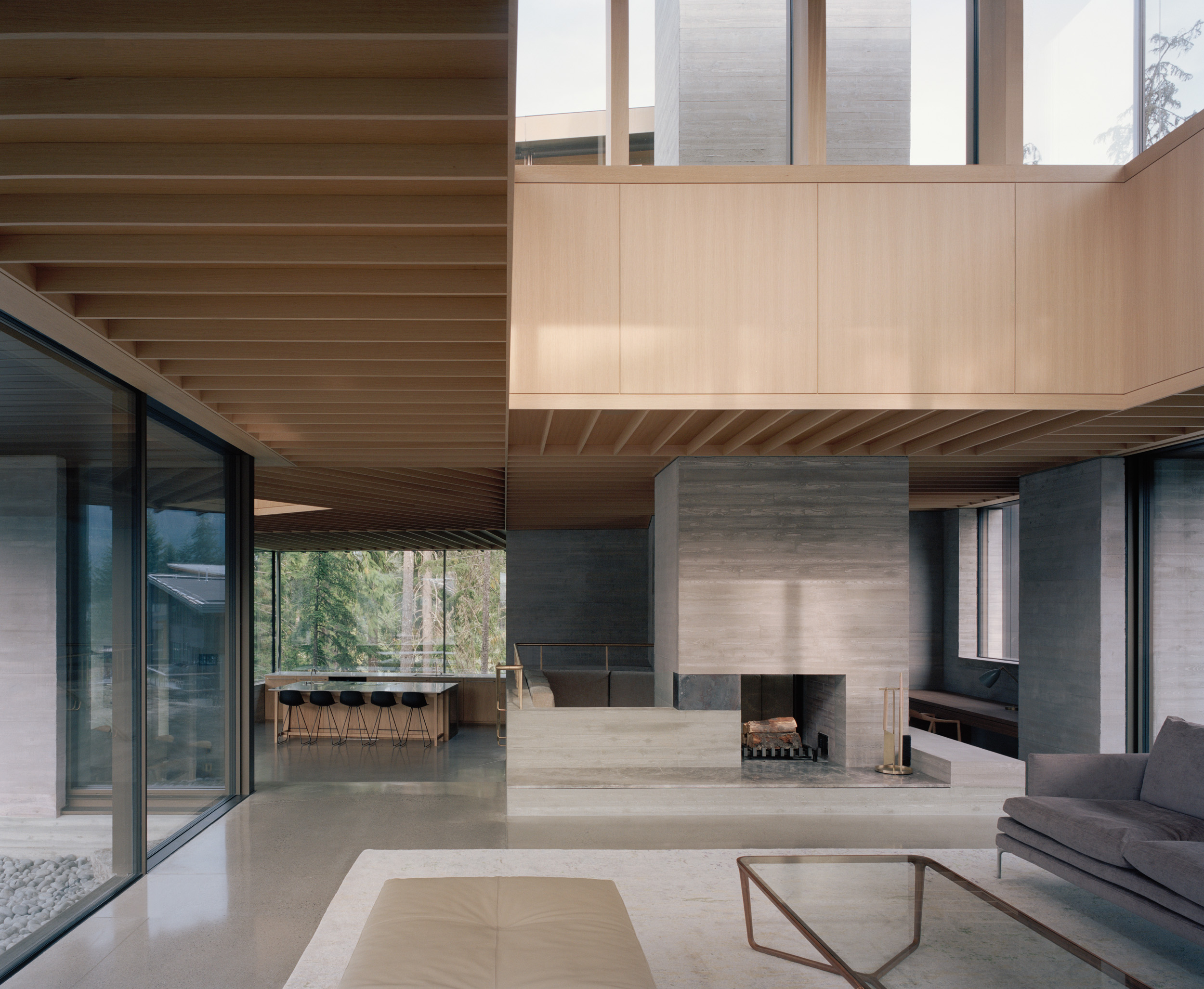 Throughout, furniture is sparsely arranged. Some is designed by Gort Scott like the bedside and dining tables. Internationally known makers such as lighting designer  Michael Anastassiades feature in the composition as well as British Columbians like rug-maker Jan Kath. The cabinetry and millwork is Japanese inspired and complements, in a secondary way, the sublime views of the pine forests through the home’s many windows. 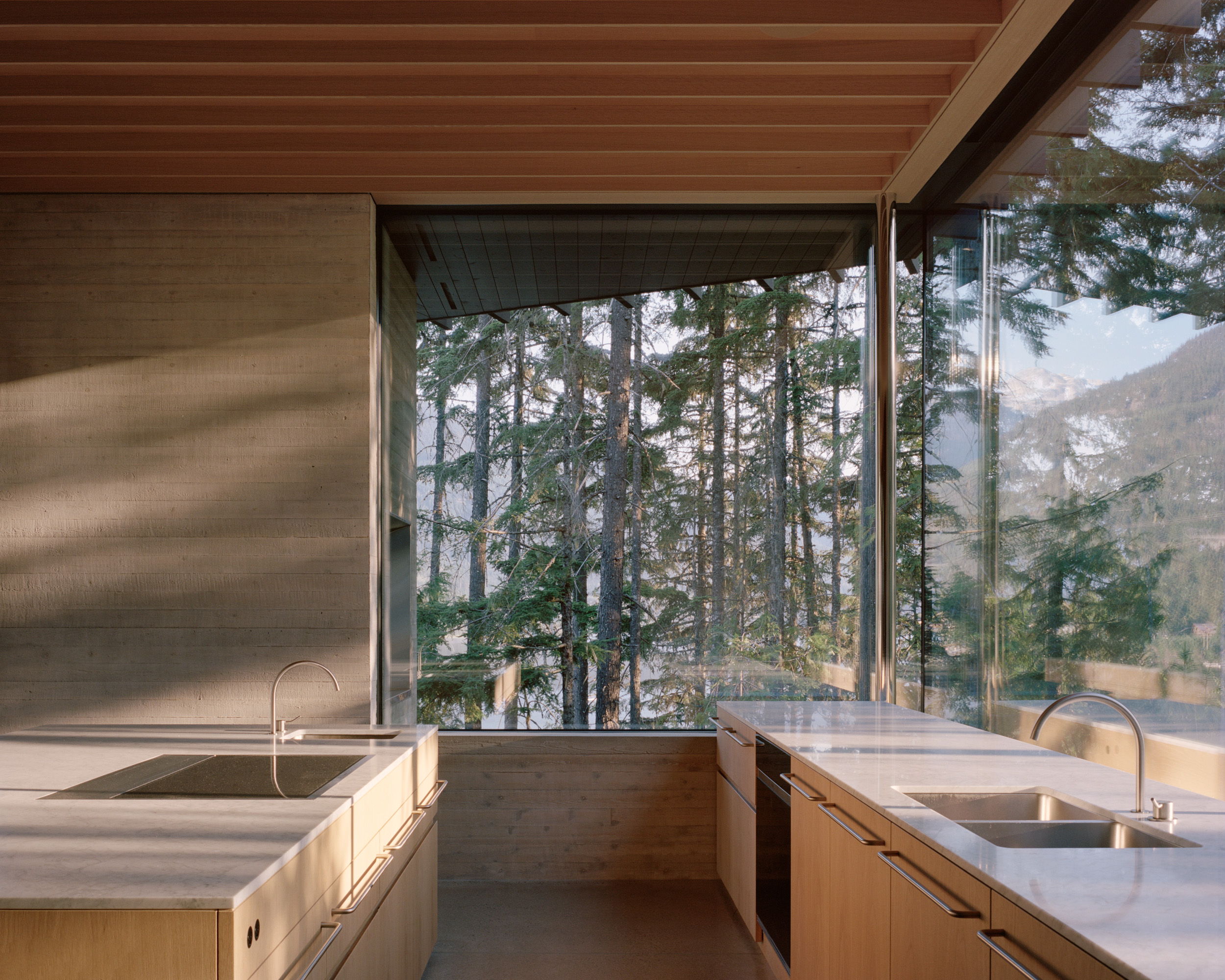 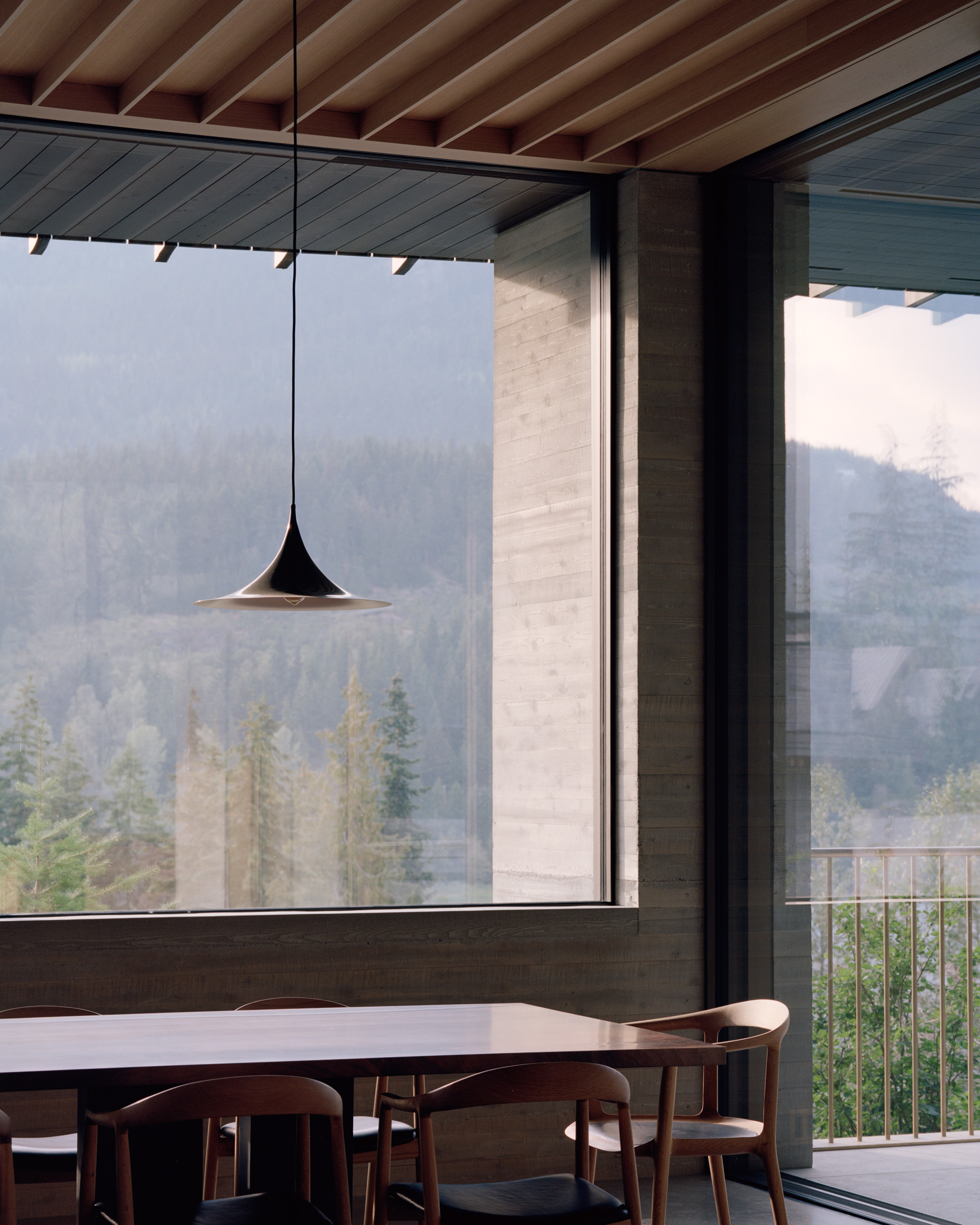