If dusk sees the reflection of the day and the mind’s gliding entrance into dreams, then dawn is a time of getting to work, of soberness. It is a clear-eyed space where abstractions become material. Such are the themes surrounding German-Italian sculptor and architect Umberto Bellardi Ricci’s latest exhibition at Matter in New York City.

Dawn is a series of minimalist light fixtures and furniture that take cues from the material palette of New York City itself, Bellardi Ricci’s current home. The pieces reference I-beams and other classic steel forms scaled down to function as domestic objects. 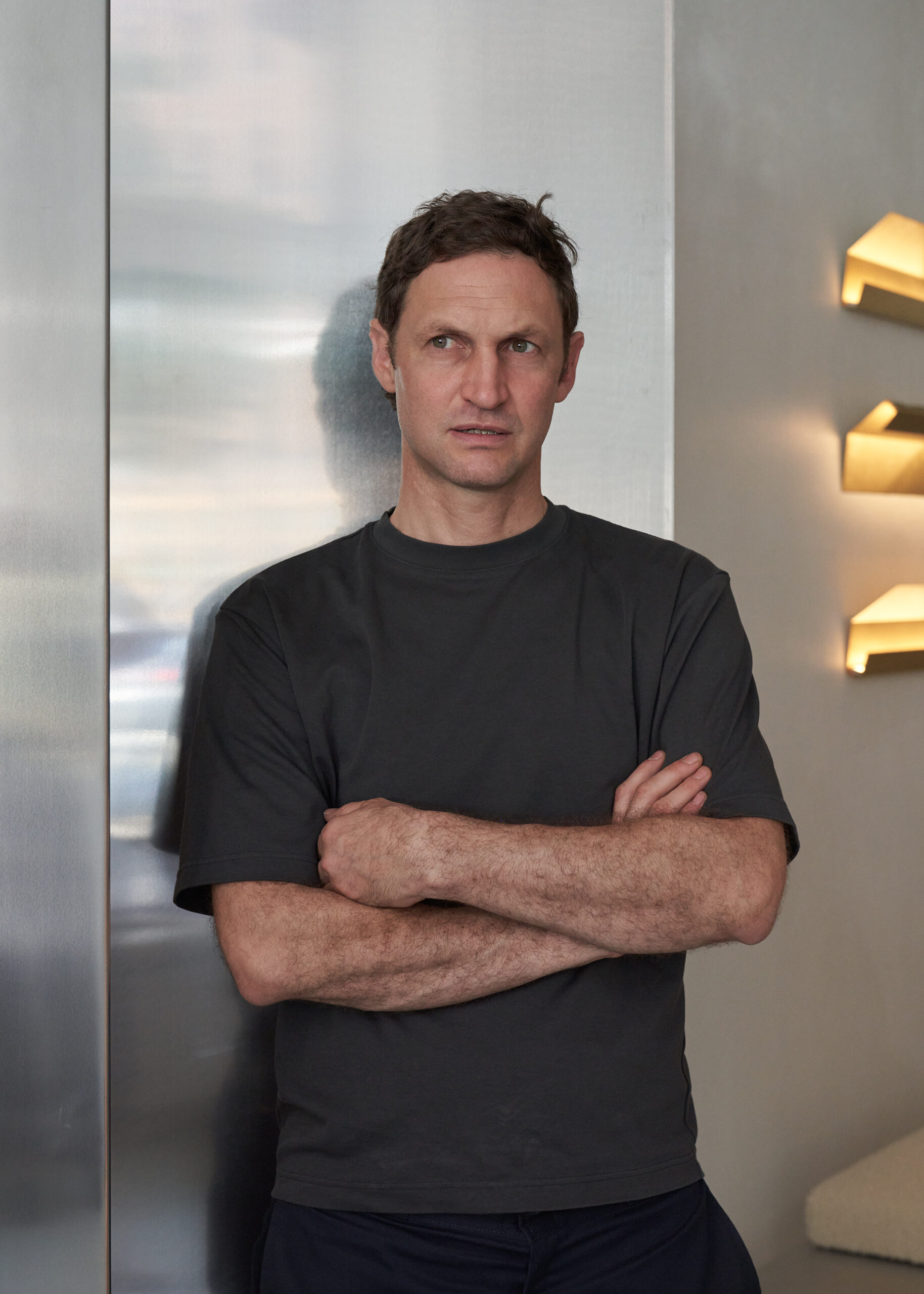 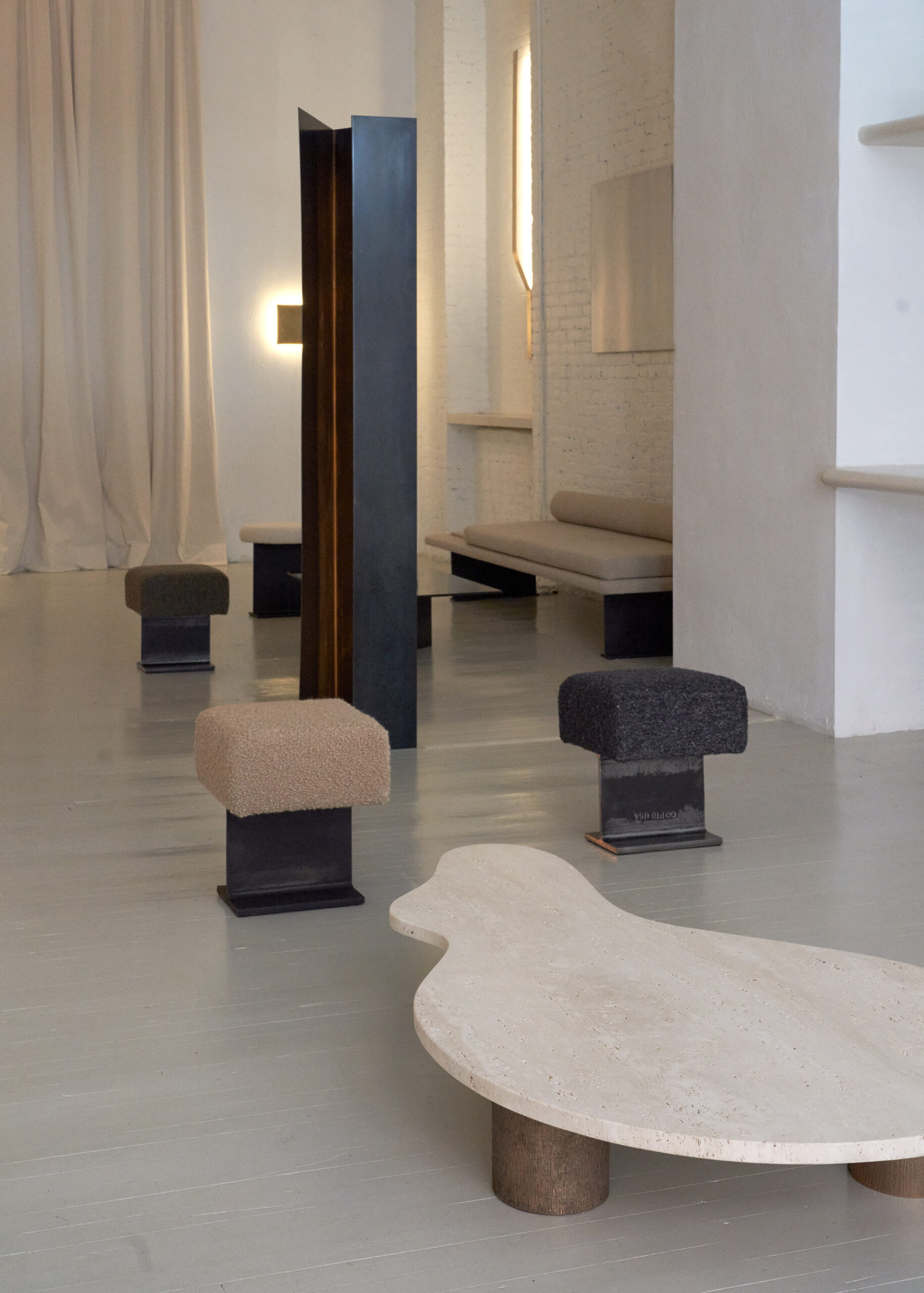 “This was a new beginning and a new launch, and it had that kind of energy, like a coiled spring,” says Bellardi Ricci, a multilingual cosmopolitan who has used a variety of materials in his diverse career, which has included human rights work as well as a stint as a musician in Paris. A departure from some of his past materials, this project focuses exclusively on metal.

Bellardi Ricci explains that he was inspired by the grandeur and the culture of work, production, and steel that dominates New York City. 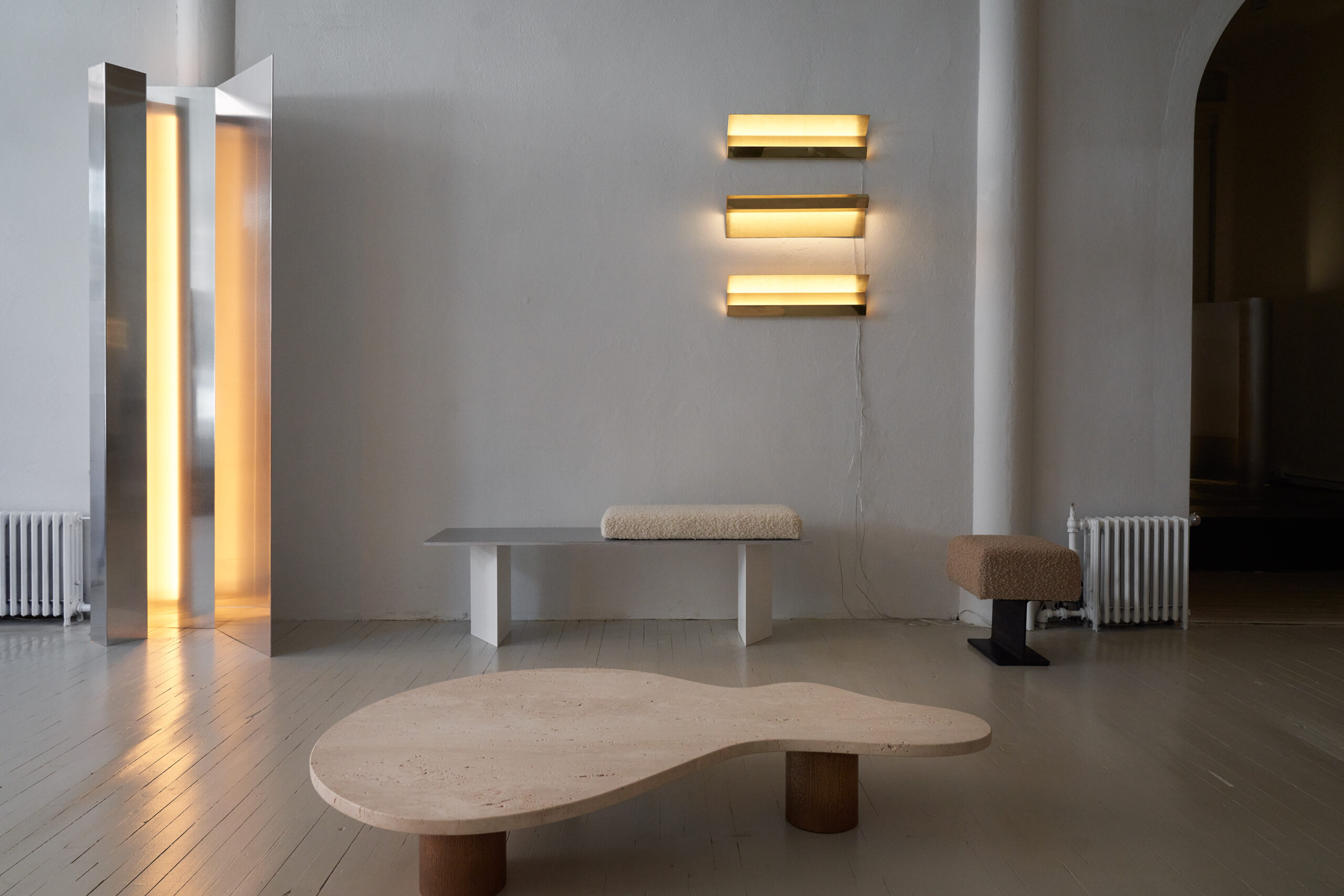 “In a way, New York really focused me,” he says, bringing up but then dismissing Koolhaas’ famous description of New York as a city of voluntary prisoners: “It kind of streamlined everything and focused everything on these very minimal pieces, very reduced.”

Bellardi Ricci, who was educated and taught design in London, describes the process of moving first to a monastic isolation in Ithaca and then to a workshop in the city, where wood items were removed from the surroundings and metal remained, as a sort of decluttering mentally. This parallel between mental states and physical activity is even more striking given his involvement with an experimental sculpture studio and educational venture near Las Pozas, the famous sculptural garden in the Mexican jungle built by Edward James, a patron of the early 20th-century surrealist movement. The sculpture garden includes all sorts of built ruins, stairways to nowhere, massive arcane balustrades and buttresses, all being slowly consumed by the jungle. 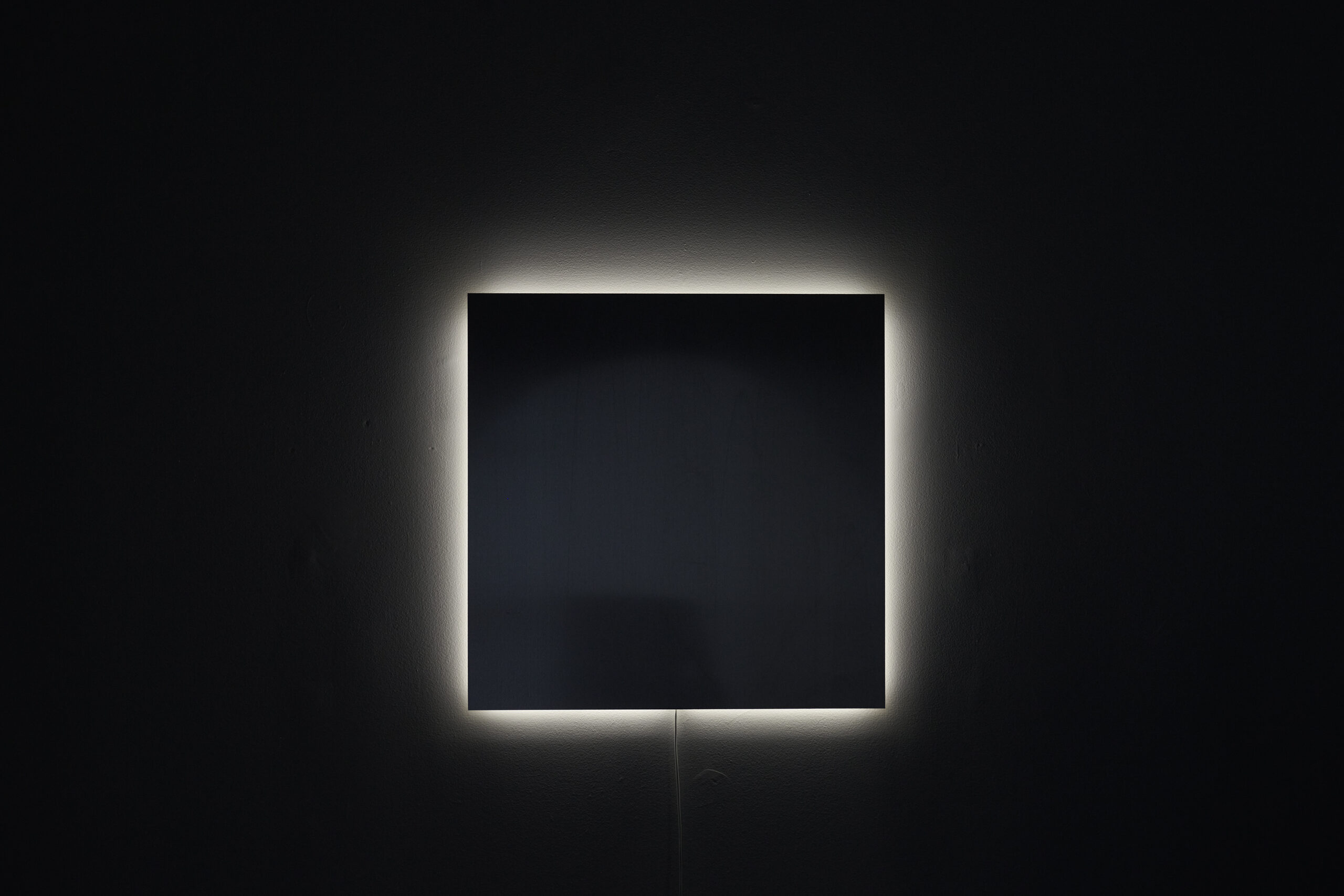 A brass lighting fixture that illuminates the contours of itself in the darkness called “Male.”

The designer is fascinated with linguistics, hermeneutics, and how the built environment gives insights into the culture beyond the purely functional. One way he imagines this is by appreciating the negatives and moulds that go into sculpture work by “trying to reengineer the mind to formally revisit these negatives and to imagine the positive—always the jumps between positive and negative.” 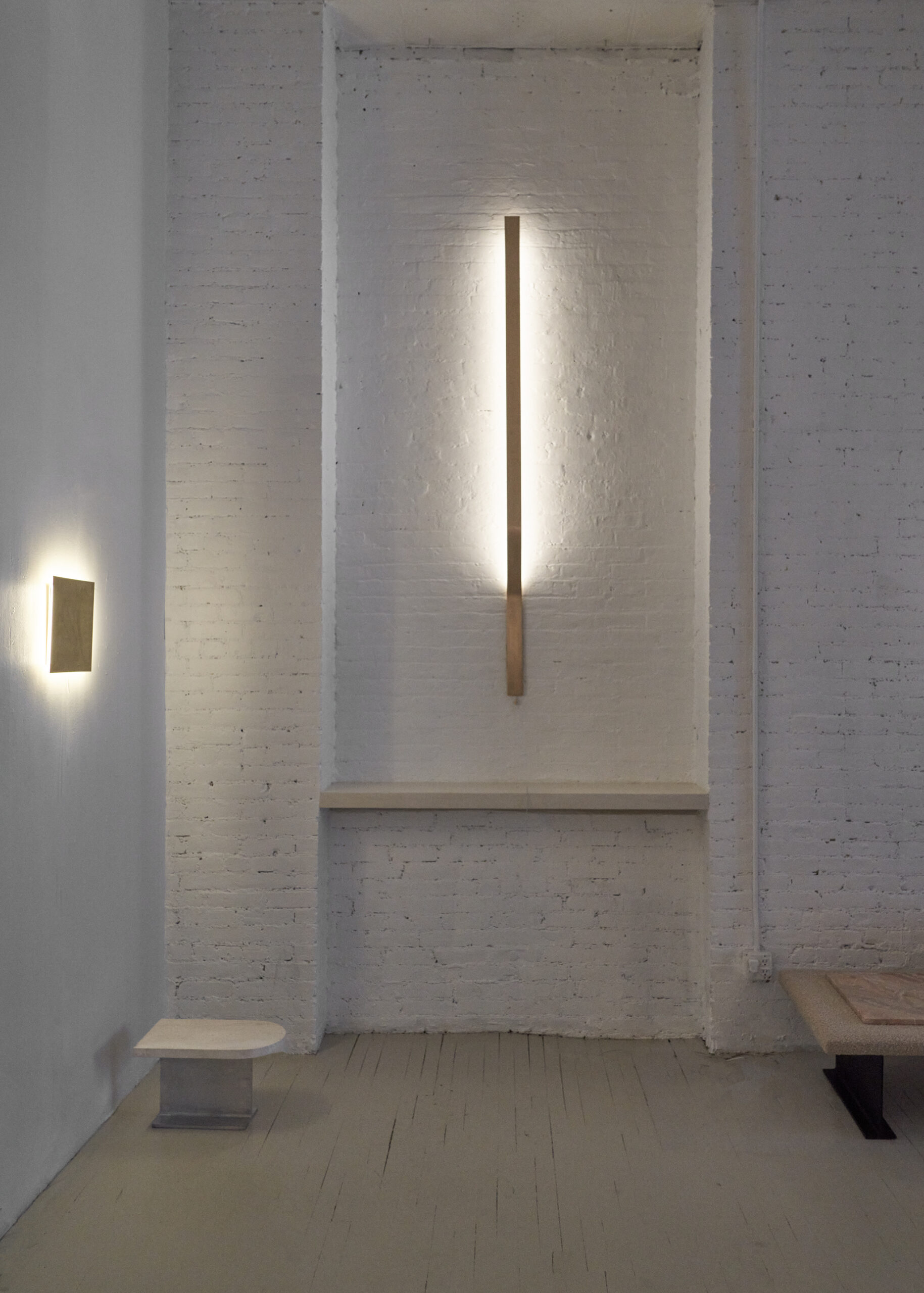 The act of creation thus becomes a commentary on the processes that go into the creation of the built environment, something apparent in Dawn with its reliance on forms that seem to represent a set of urban first principles—elementary metal forms that are the unseen basics of the city: the square, the interstice that lets the light from inside hint to those outside at the beating pulse of human life and thought within and behind the metallic, cold materials. These forms get at something very basic about the city, “how these kind of enclosures and spaces and boundaries kind of define you in a way,” he says. 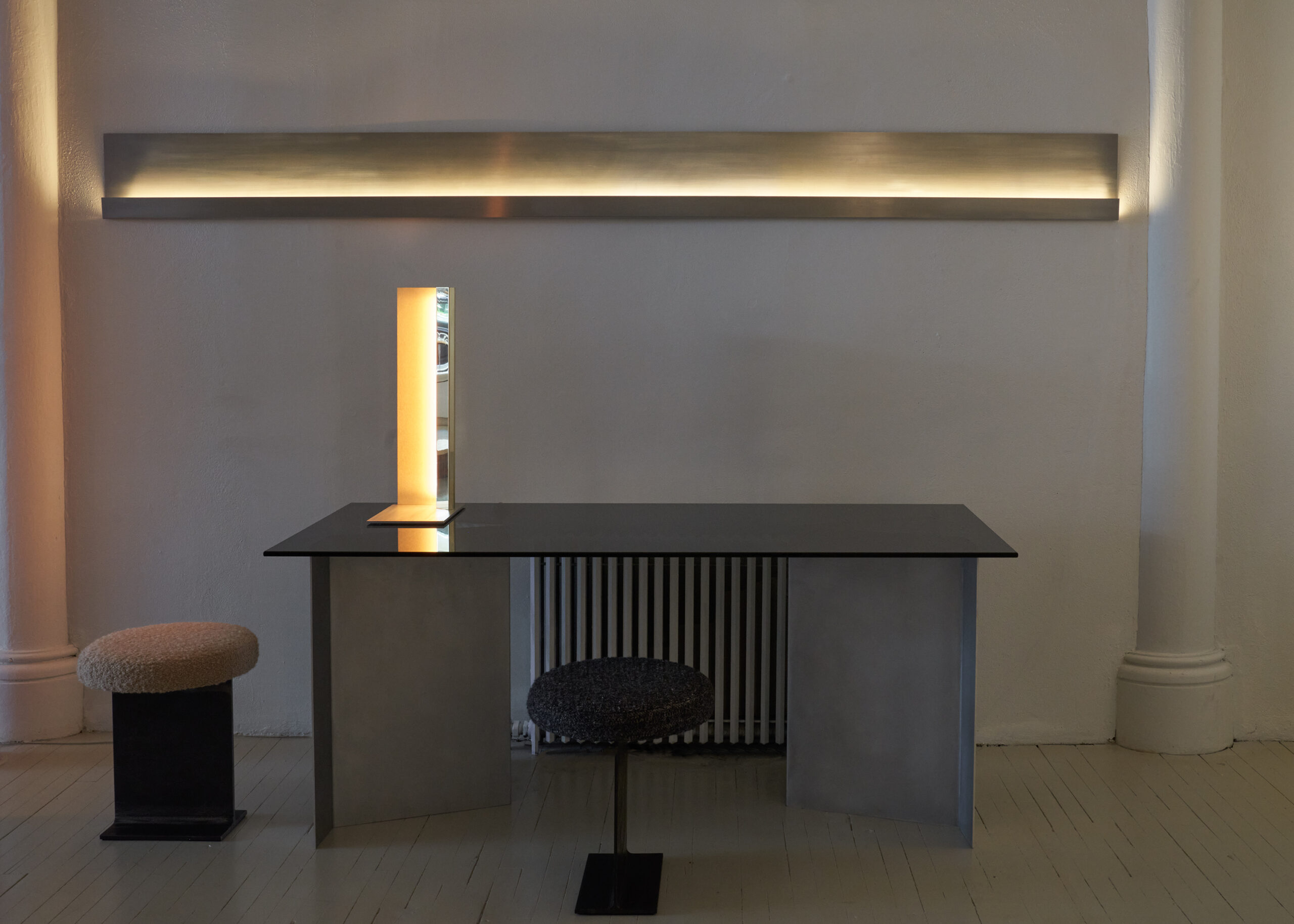 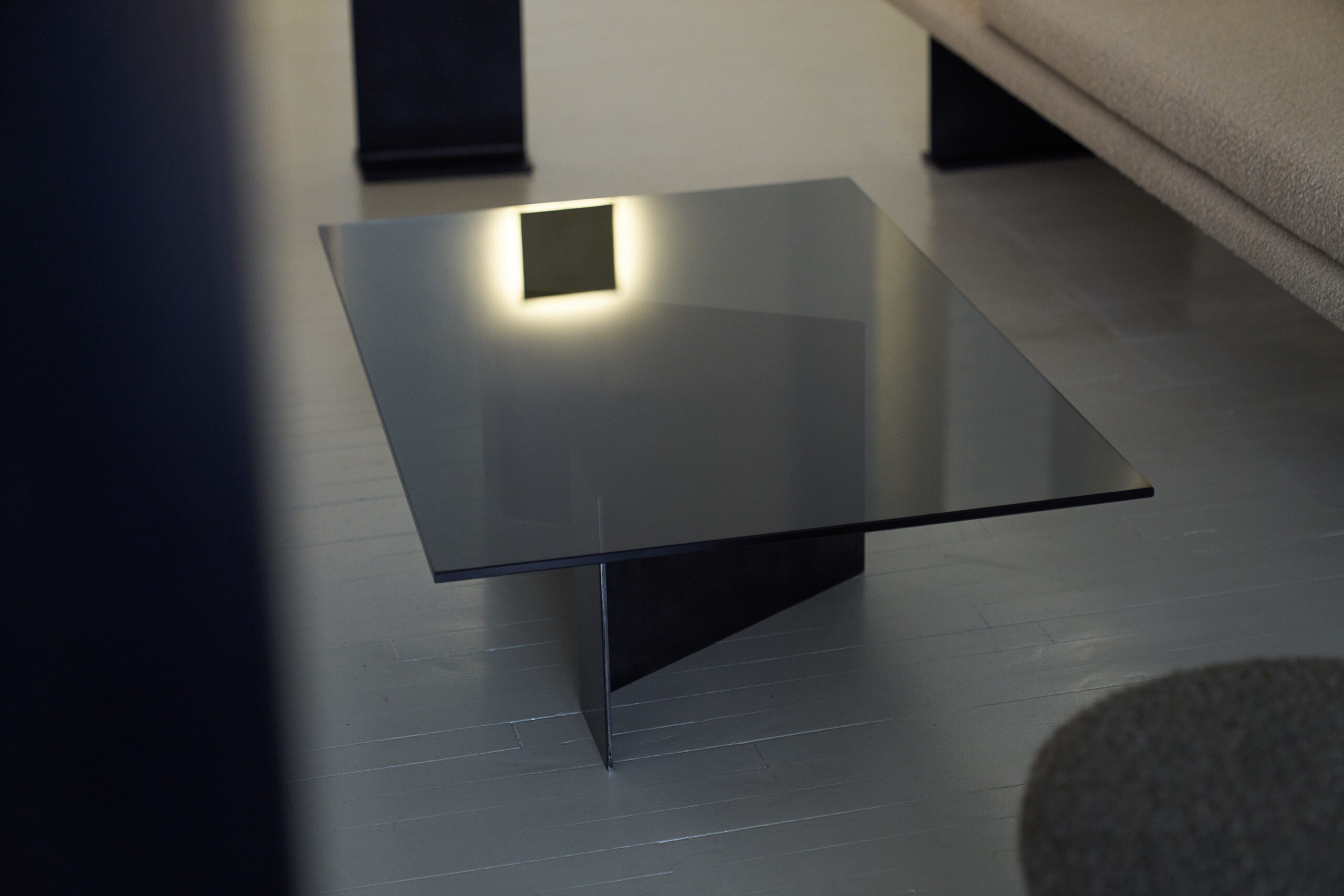 Bellardi Ricci’s minimalism is a warm one, partly because he never described himself as a minimalist until recently. His concerns regarding design are lodged in communication and a distinct European humanism that has been transfixed by the American mode of production that he says “has a final aim.”

“I like that a lot about American design in a way; while European design is often a lot more complicated, they are very straightforward, in a functional way. It also has this mass market behind it, and I think it helped me to shed a lot of complexity,” Bellardi Ricci says.

Moving between materials and design sensibilities is similar to moving between languages (Bellardi Ricci speaks seven), and the movement from the rigour of Europe to the dreamy plazas of Latin America to the bustle and production of New York is condensed in these forms.

The exhibition is on until August 27 at Matter.