Crete Senesi—Italian for “Sienese clays”—is the region in Tuscany where Ciclostile Architettura, a Bologna-based firm, completed this award-winning project. The antique farm house shows what is possible when using contemporary building materials and techniques to construct habitations in the cultural style of a region. 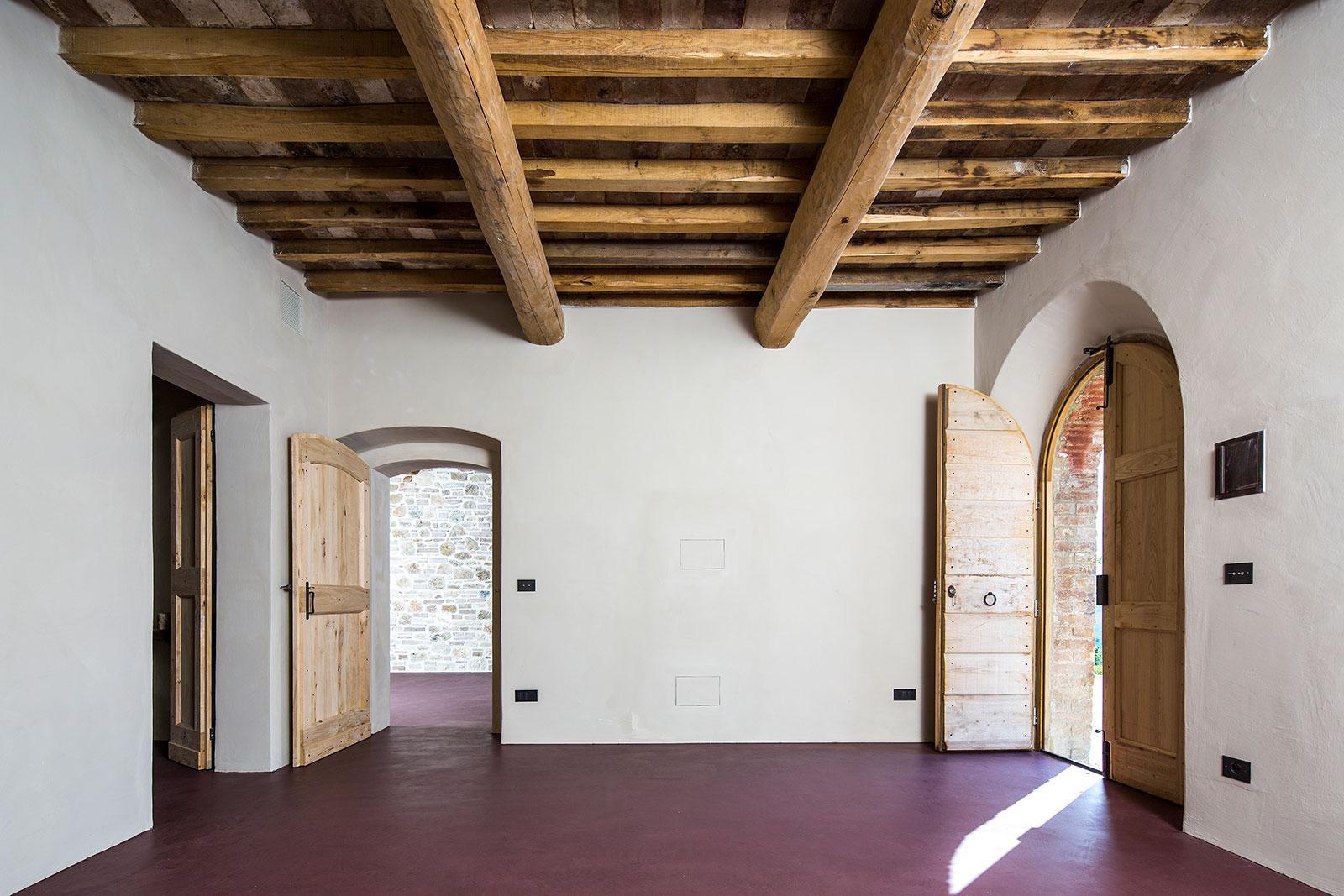 The lower levels of the home were once service quarters and stables.

The three-storey, 6,500-square-foot abode maintains the characteristics of the previous structure and updates them with some key interventions. Once multiuse—the first floor served as a stable—the different levels have been unified into one structure. The architects made it their mission to reuse as much as possible. The floor of the bottom levels features a resin mixed with the old clay pavement.

Outside, the stone from the original structure has been restored with added sections of perforated brick that cast beautiful light on the staircases within. 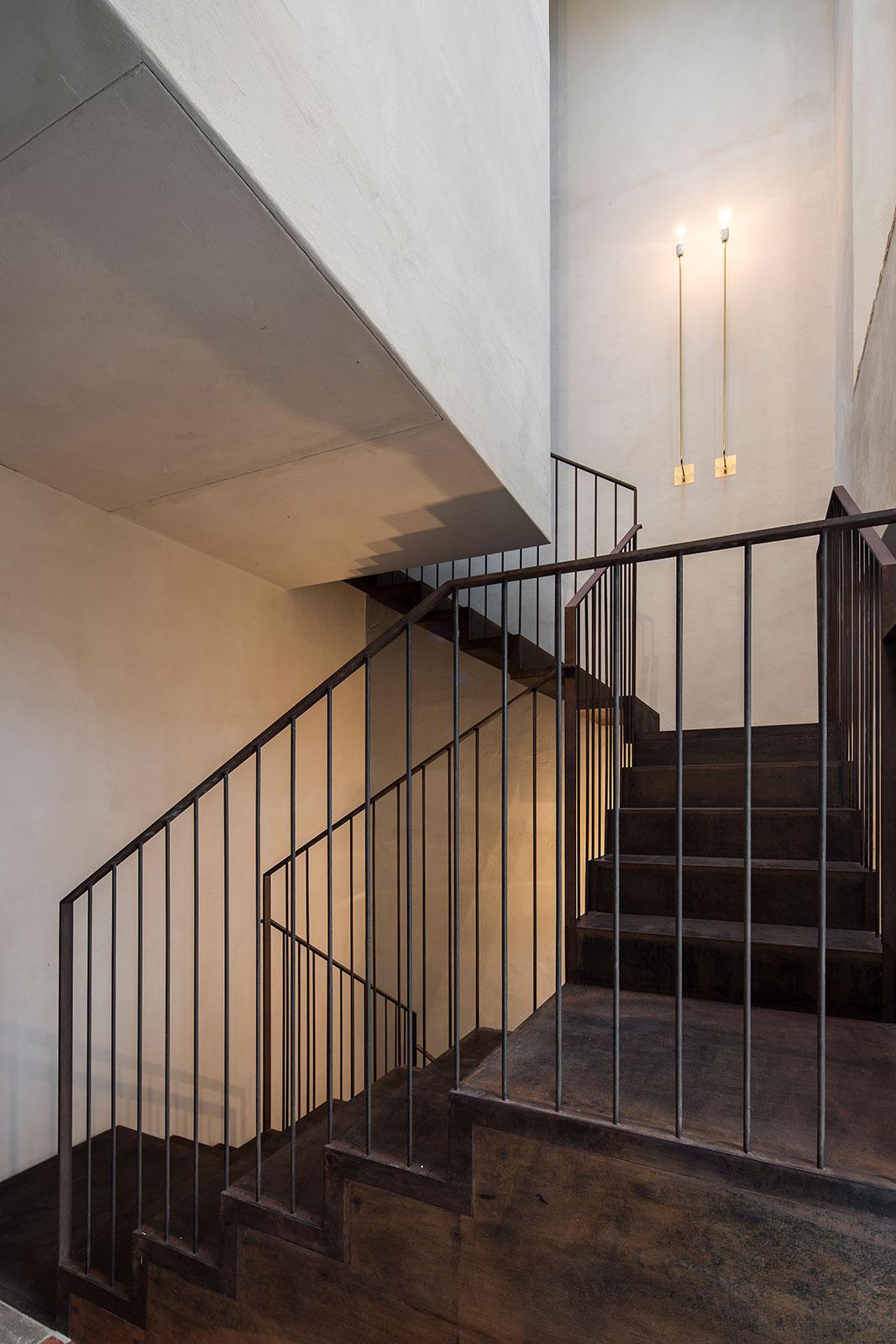 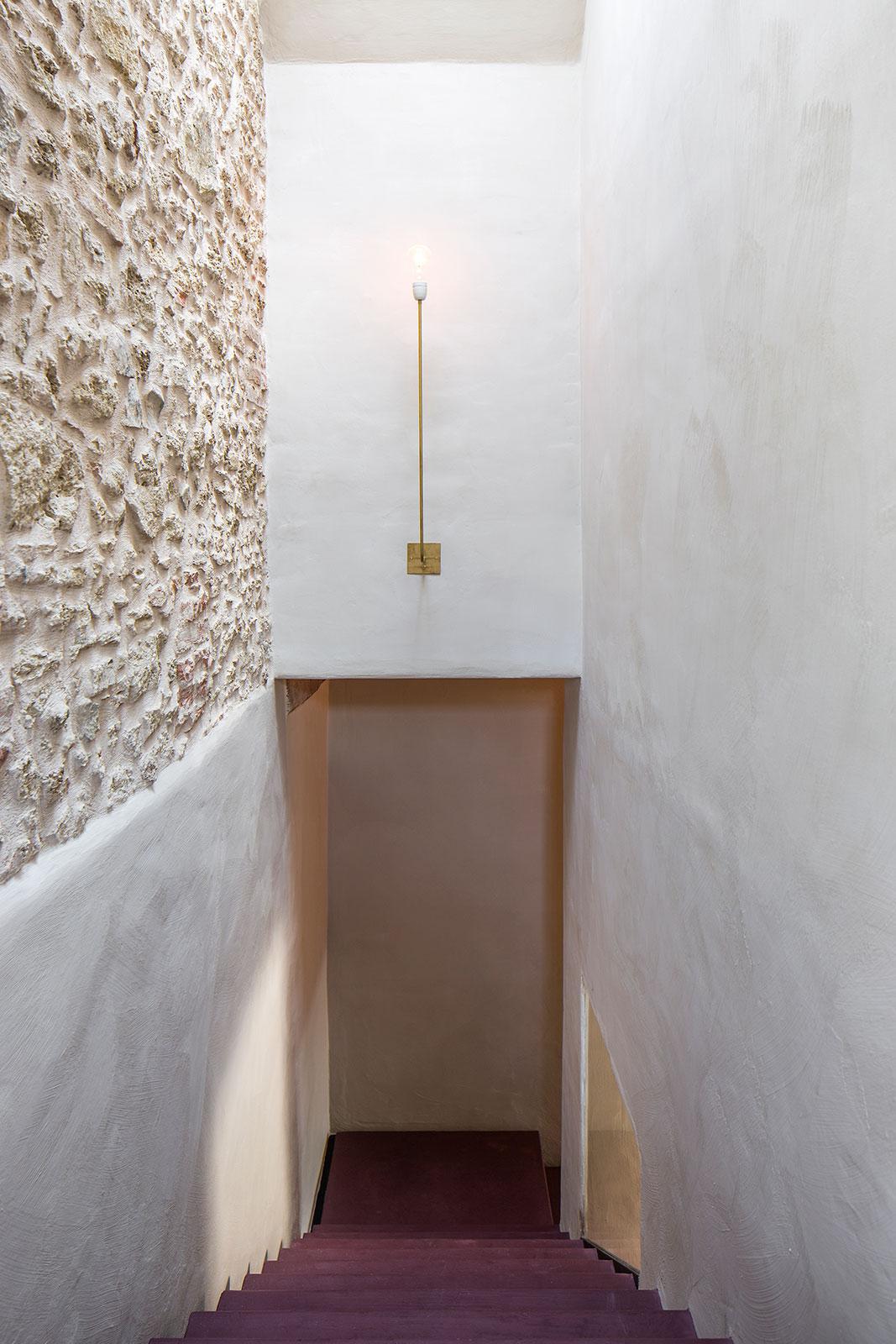 The architects used brick recovery methods to reutilize some of the elements of the ancient structure. Traditional woodworking techniques have been used throughout in the millwork, but especially in the floor of one bedroom, where it has been made to look like a criss-cross of brick. Recovered wood was used when possible, and the reference to the original building is visible in the exposed ceiling beams. 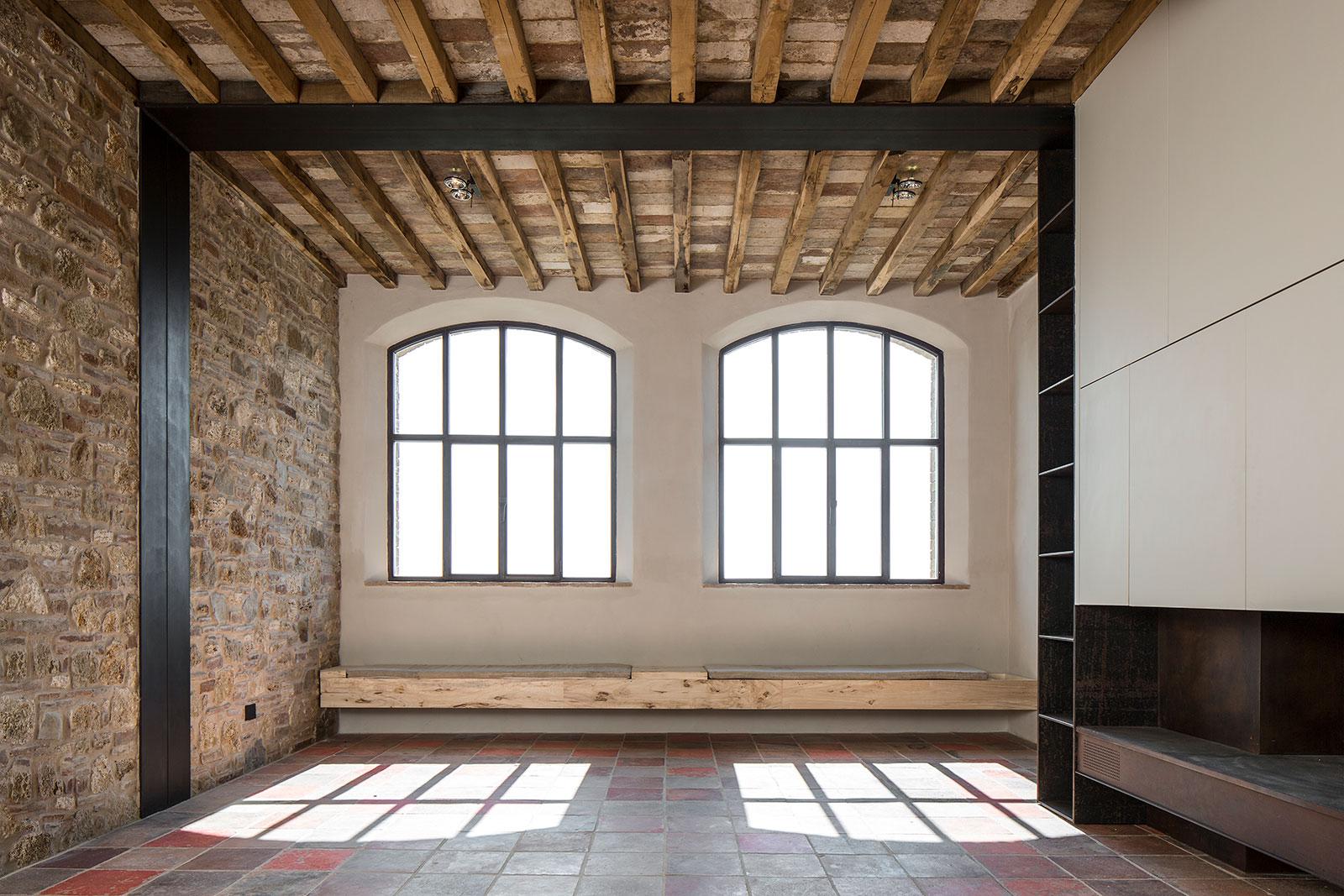 Steel played a big role in the reconstitution of the house. You can see where structurally weak aspects were redesigned by using steel beams. The effect is a cross-section of certain rooms that highlights the remade nature of the house without detracting from the historical aspects. A corten steel staircase and double-sided fireplace are also standout uses of the material. 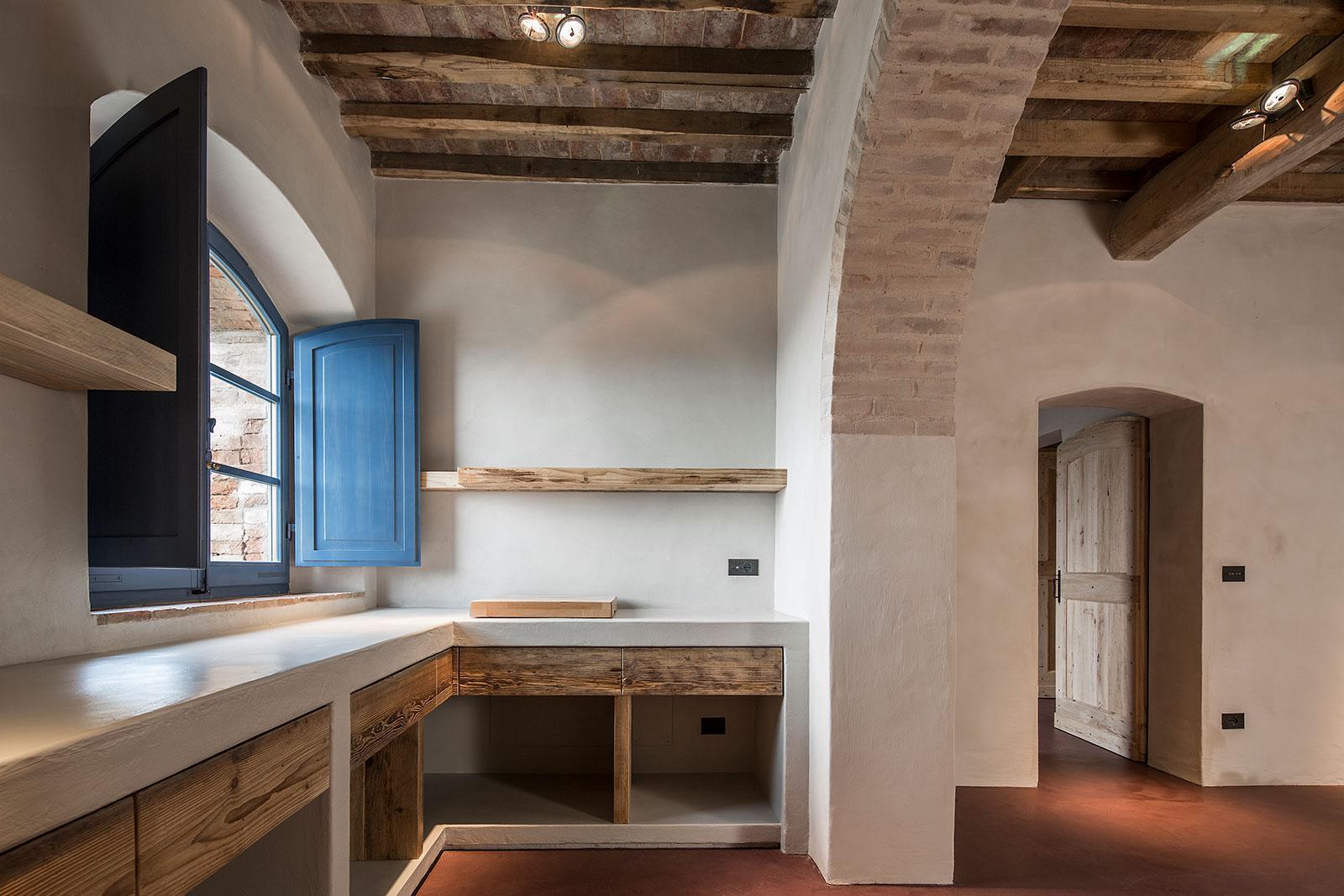 Natural lime finishes, typical of the region, are left unpainted throughout to further bring out the traditional nature of the structure. Windows with gentle arches let in plenty of light from a variety of angles onto the almost-kitschy, irregularly patterned tile floor of the upper storeys. 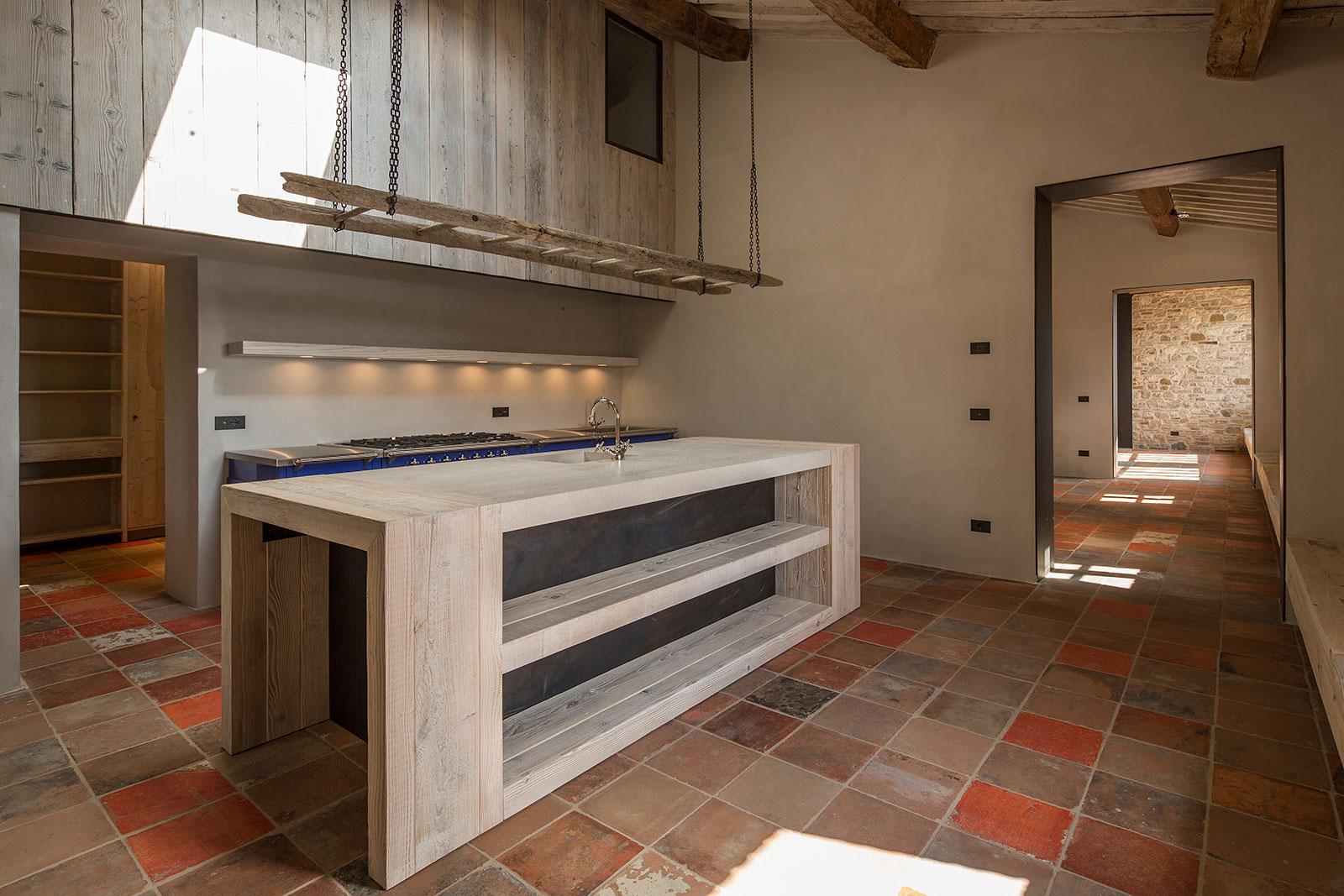 A rustic modernism in the reclaimed millwork.

Two towers each have a suite offering amazing views over the landscape and down onto the private garden. It’s fair to say that the architects have brought to life a Tuscan dream for the inhabitants and for those who love period correctness and geographical fidelity in restoration projects.