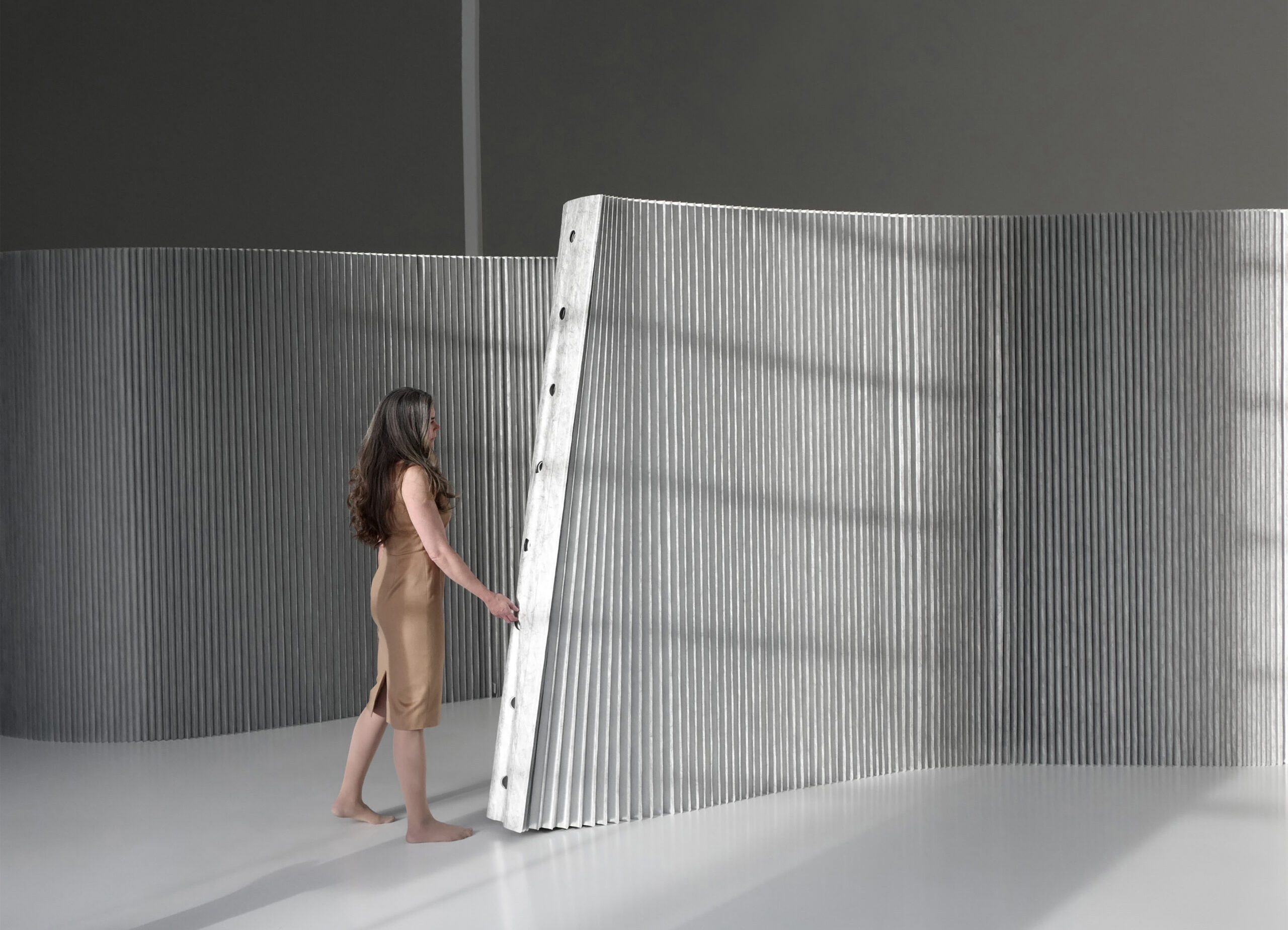 In retrospect, our expectations of communal space seemed breathtakingly relaxed in the time before. Particularly in office culture, where über-casual atmospheres sprang from Silicon Valley and coursed through global interiors like big tech energy, the collaborative environment was analogous with one big idea: the open floor plan.

Walls came down, nudging co-workers to collaborate, and the cubicle was swiftly seen as an affront to creativity. Hip offices broke down barriers even further, blurring the traces of corporate attitude with vibes you’d expect from coffee shops and restaurants, creating relaxed workplaces that encouraged a social atmosphere.

But then Covid happened, and suddenly these wide-open spaces seemed precarious—as if built to amplify a sneeze.

Of course, the proliferation of amorphous space already had pushback from coworkers who felt the lack of barriers lacked privacy, tantamount to sharing the same desktop as everyone in the office. But as many of start-uppity names that cemented the aesthetic, from Shopify to Twitter, embrace new “digital by default” strategies, the future design of these spaces is a moving target.

To get an idea of what a new social space might entail, even beyond the workplace, we spoke with three of Canada’s innovative design studios—all of which just so happened to have created workable solutions long before the pandemic—to get their read on what communal space might look like in the future. 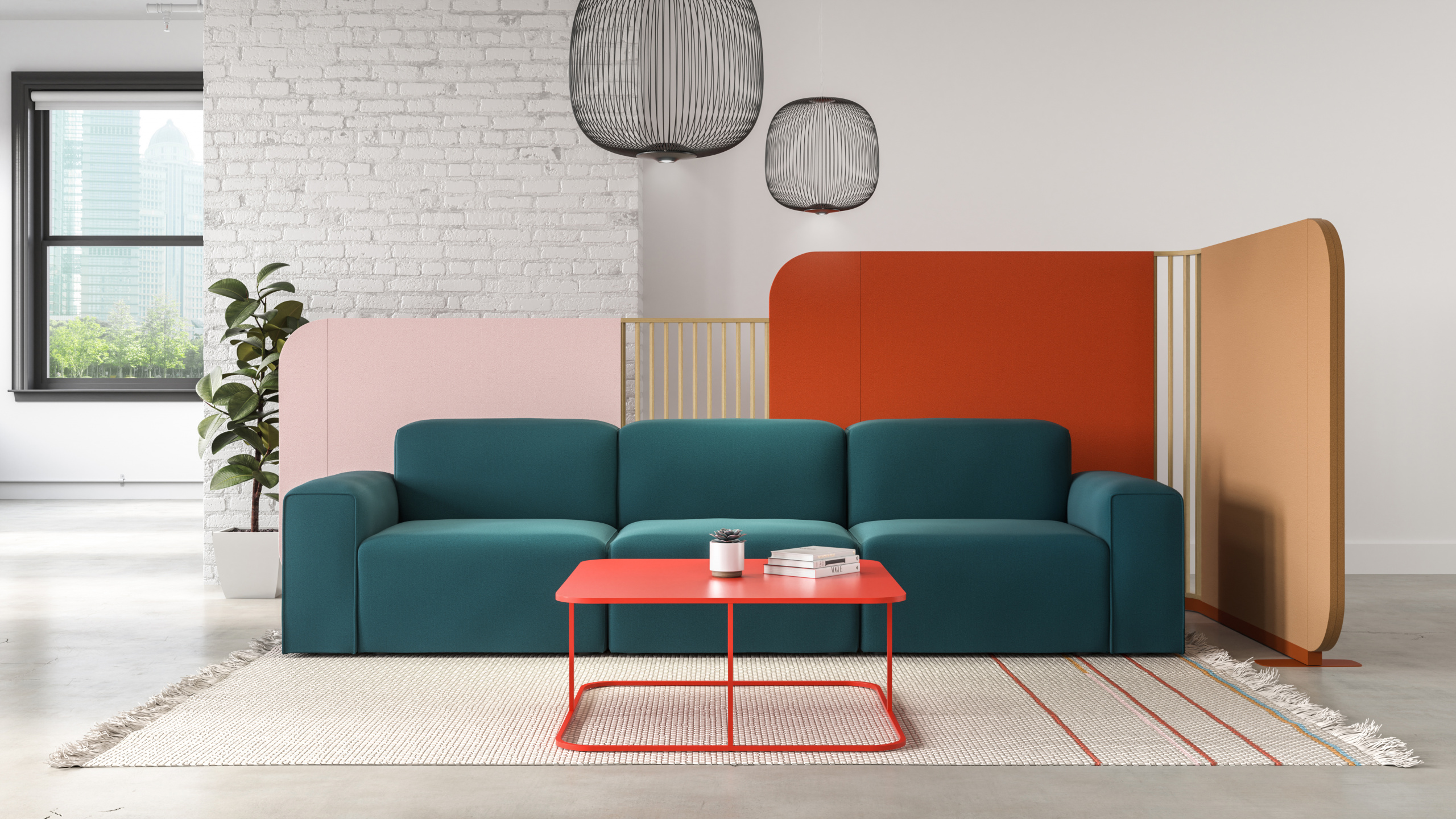 “Social spaces are the most difficult areas to solve for in the office in the Covid world,” says Lee Fletcher, a founding partner of Fig40, an industrial design studio based in Toronto. “[They] are inherently fluid, and most likely dependent on the culture and protocols of each specific workplace.” Fletcher’s studio specializes in the type of furniture that inspires collaboration, often taking form as furniture that can be easily moved or reconfigured.

Regardless of site-specific conditions, Fletcher believes there are several key design elements that future spaces will need to consider. Chief among those needs are materials, likely drawing on lessons from healthcare furniture in both composition and material, as well as the idea of working together—and finding formats that make it work.

“The layout of chairs and screens can remind people to keep distance. A casual drop-by for instance could be handled with some strategically placed planters, well-sized screens and counter surfaces, putting people naturally at ease all the while at a safe distance,” he says.

Anticipating the need for more dynamic workplaces, Fig40 just launched a new collection, two years in the making, called Still with Stylex, which was recently expedited as a result of the pandemic.

“Its focus is to create smaller, intimate spaces within larger open areas,” Fletcher explains of his studio’s new concept for partitions. “There are slatted, ‘see through’ sections as well to ease the transition from open to enclosed spaces, helping to create distance without creating barriers. The varied compositions all work to create a new landscape, and the systems nature of the collection also allow for varied levels of enclosure and distancing. They can also be used to direct traffic flow.” 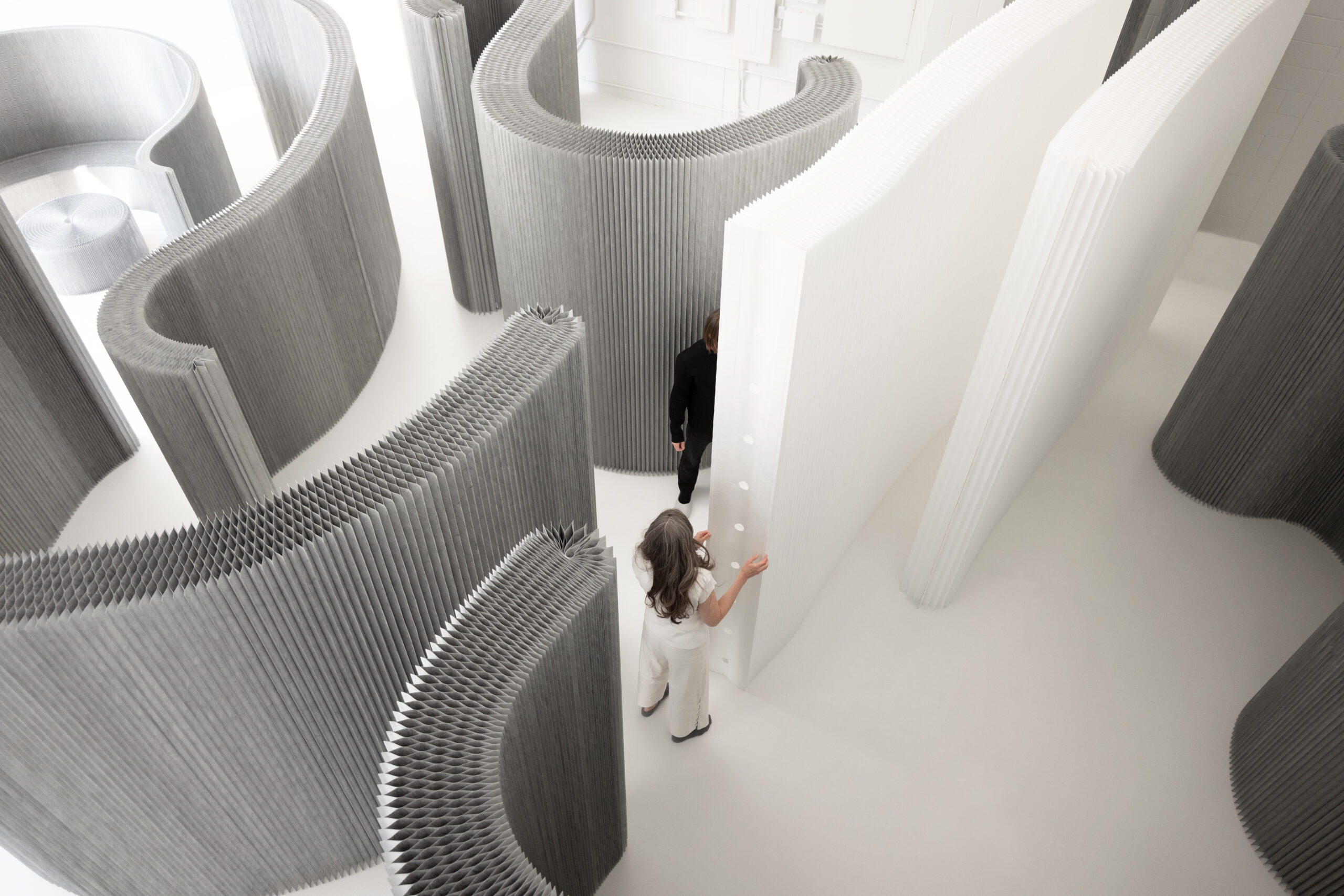 In Vancouver, the co-founders of the design studio molo, Stephanie Forsythe and Todd MacAllen, believe there are a few design principles that will be reinforced as a result of the pandemic. “The ideas of being able to adjust space for changing needs over time have stayed the same but clearly with Covid there is an increased need for physical separation in many different types of spaces,” say Forsythe and MacAllen.

Updated last year with a new aluminum colour scheme, molo’s textile softwall + softblock collection happens to fit the times. The compressible, flexible, and modular room divider is made of papery layers structured with honeycomb geometry, creating an adaptable partition that users can curve and reorient in endless formations (they can expand one hundred times their compressed dimensions), relinquishing “notions of rigid space.”

Installations of molo’s softwall can look somewhat like cushy Richard Serra sculptures (molo’s original design is in the permanent collection of the New York Museum of Modern Art, no wonder), bringing elegance to a new reality where even more barriers are evermore likely. Several longtime clients have already repurposed existing softwalls in the midst of Covid, using them to create safe contactless retail pick-up areas or even finding a use for them as flattering backdrops to video conferences (the walls have the added benefit of sound absorption).

But they also see a lesson in reducing boundaries overall, specifically between interiors and exteriors.

“Through this experience, we will better appreciate the need for quality outdoor spaces with the capacity to suit the scale of cities and communities,” say Forsythe and MacAllen. “The relationship and value of indoor to outdoor space has been highlighted with restaurants expanding into outdoor spaces during Covid, more attention to indoor [and] outdoor space for all building types is a good thing for Covid and beyond.” 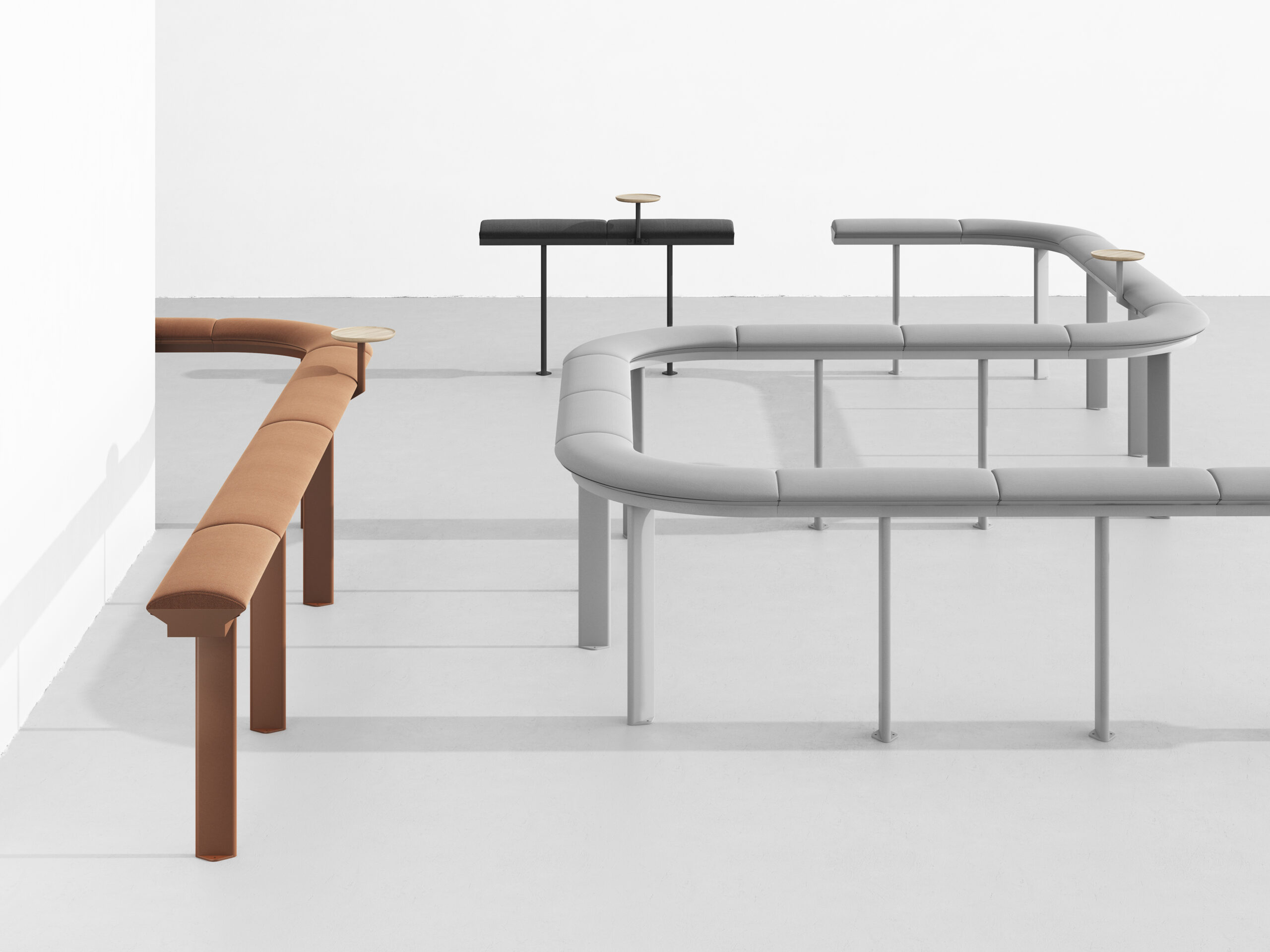 As Toronto’s MSDS Studio, co-founder Jonathan Sabine isn’t ready to sound the alarm—if a viable vaccine is introduced, he doesn’t believe enough time will have passed to bring permanent changes to design. “But if a vaccine proves elusive, or if not enough people take it to provide some sort of collective inoculation, then public space could take on an air of persistent, low level peril,” Sabine says. “Barriers between tellers and the public, or between treadmills, will become permanent.”

Fittingly, Sabine and MSDS’ co-founder Jessica Nakanishi have wrestled with the idea of easing fixed barriers for quite some time. Two years ago, Denmark’s +Halle—which produces purposeful products that foster behavioural-led public spaces—challenged MSDS Studio to conceptualize furniture around the theme of dwelling (public activities that aren’t work, transit, or those requiring intensive devices).

“That led us to contemplate how many public furniture arrangements are really prescriptive in the ways they suggest being interacted with,” says Sabine. Released just months before the pandemic, their Boulevard system was the final result. “Boulevard insists on being used differently,” adds Sabine. The design, a wide and cushioned serpentine railing, allows the user to lean, or perch, along an elegant barrier, occupying their own space while remaining sociable. “It’s an active system that encourages people to observe the world and to be open to encounters. It fills a space in a way adjacent to sculpture,” says Sabine.

“We think this system happens to be a perfect fit for plague times,” says Sabine. “It’s a place to perch that you don’t have to make much contact with. A much different feeling than, say, an armchair, which has surfaces that people touch with their hands that could become transmission vectors. It also allows people to choose the distance that they want to put between themselves and others without the social awkwardness of leaving three conspicuously empty chairs.”

How Our Staff And Contributors Are Spending Their Quarantine, in One Sentence

How Canada’s Restaurants Have Struggled to Adapt to COVID Restrictions Behind the Pasta Renaissance Driven by Social Media During COVID