Muutus Studio is the brainchild of Kristen Becker, a graduate of Dalhousie University who was born in Toronto and raised in Vancouver and Halifax. The Hollywood Hills Residence was a project Becker began while working at Olson Kundig and finished with Mutuus. The house is for actress Mia Sara (perhaps best known for her role in Ferris Bueller’s Day Off) and Brian Henson (director/producer and chairman of the Jim Henson Company). 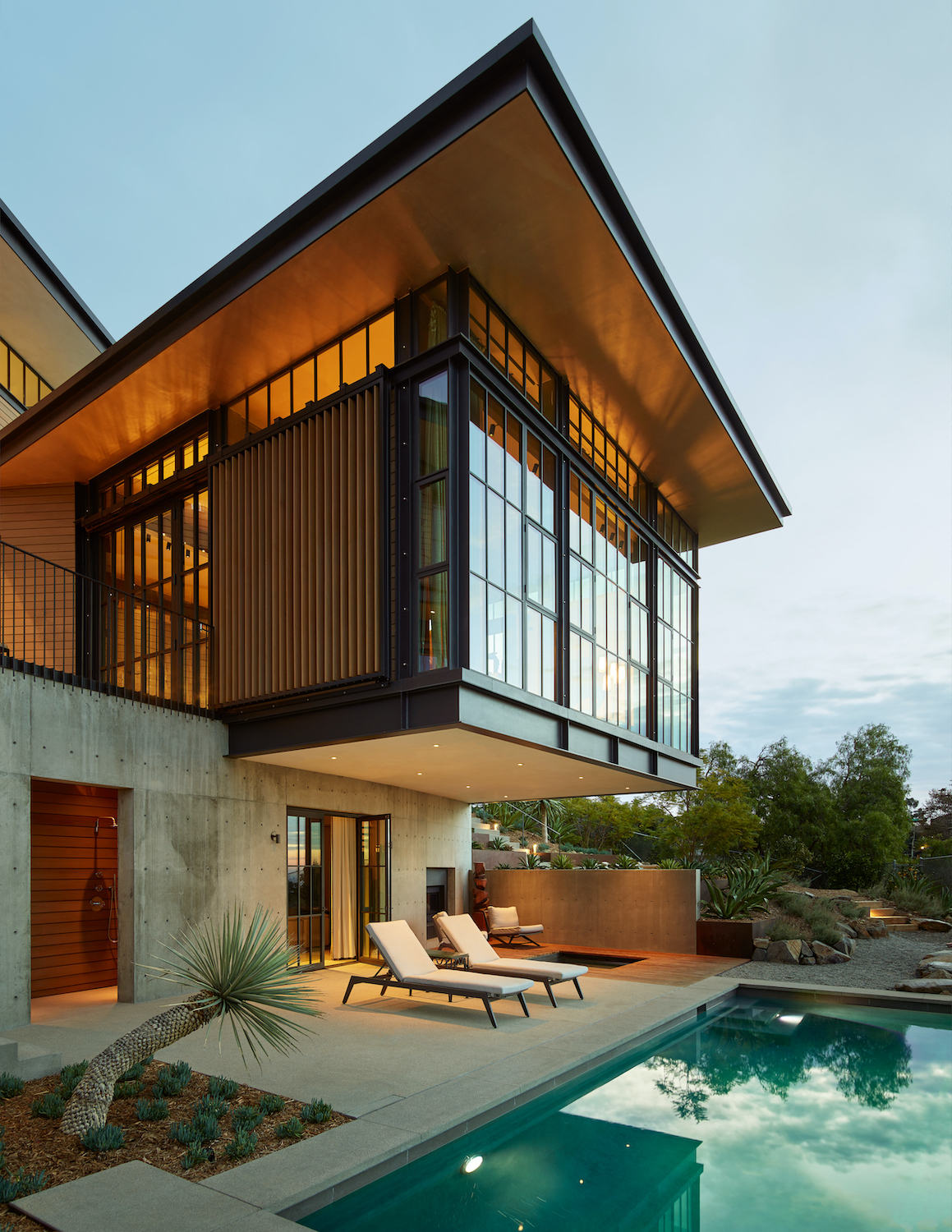 The house is bespoke in almost every way imaginable to cater to the elevated and unique tastes of the owners. Set on a 45-per cent slope in the Hollywood hills and influenced by Irish castles, the design is imposing while still being light on its feet and modern. The angles of the roof flow with those of the hills in a way that says, “you wont believe what’s inside.” 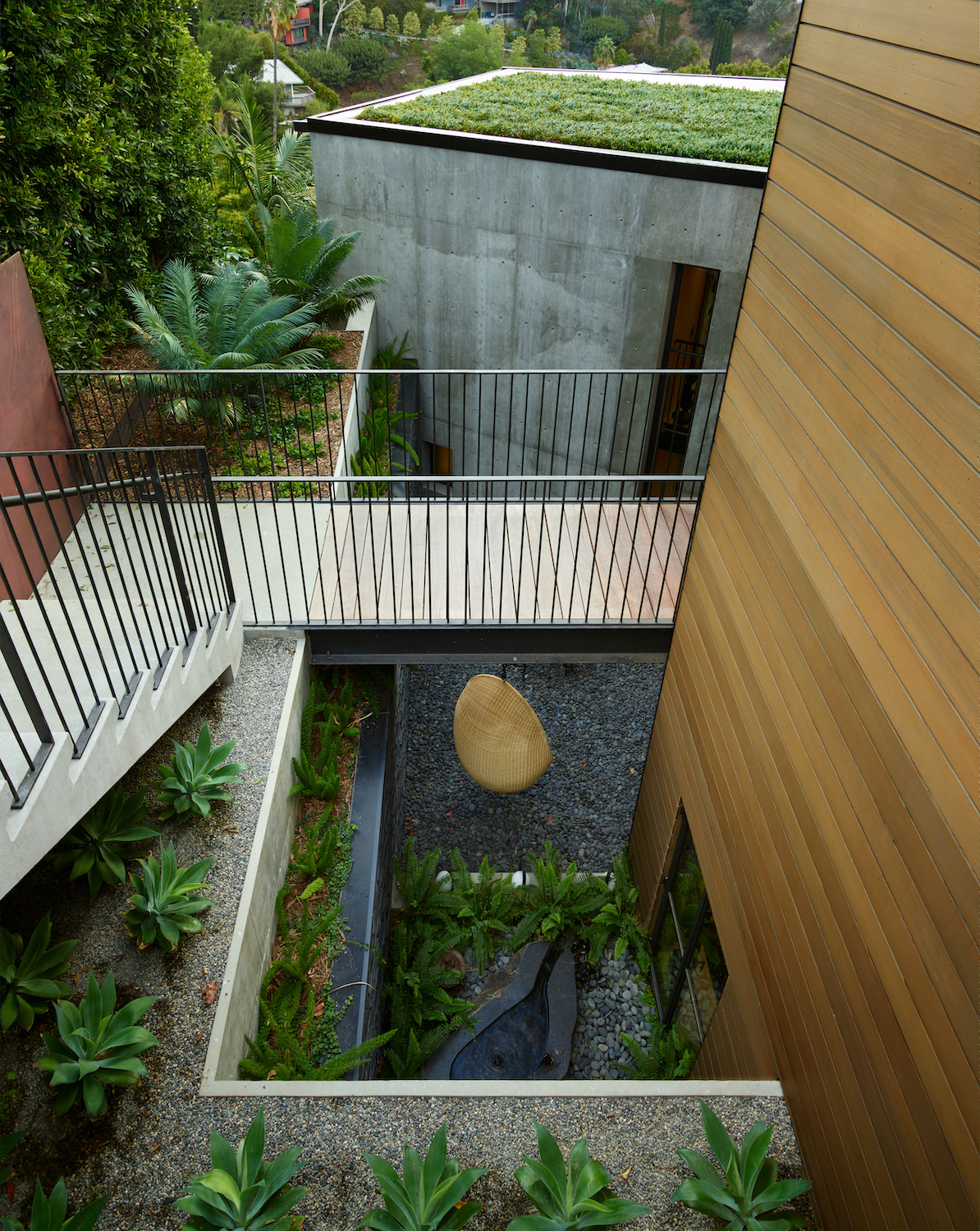 The secret garden under the entrance bridge. EGG chair by Nanna Ditzel in 1957.

The resonances between the Hollywood Hills and a castle are probably more than we think, as Los Angeles has been for so long the seat of high culture on the West Coast. While Hollywood Hill House may not have the stone and parapets, it does have a stately Brombal bronze door reached by crossing a bridge over a secret garden. Throughout the house, the windows are tall, the ceilings high, the decoration both worldy and grand. 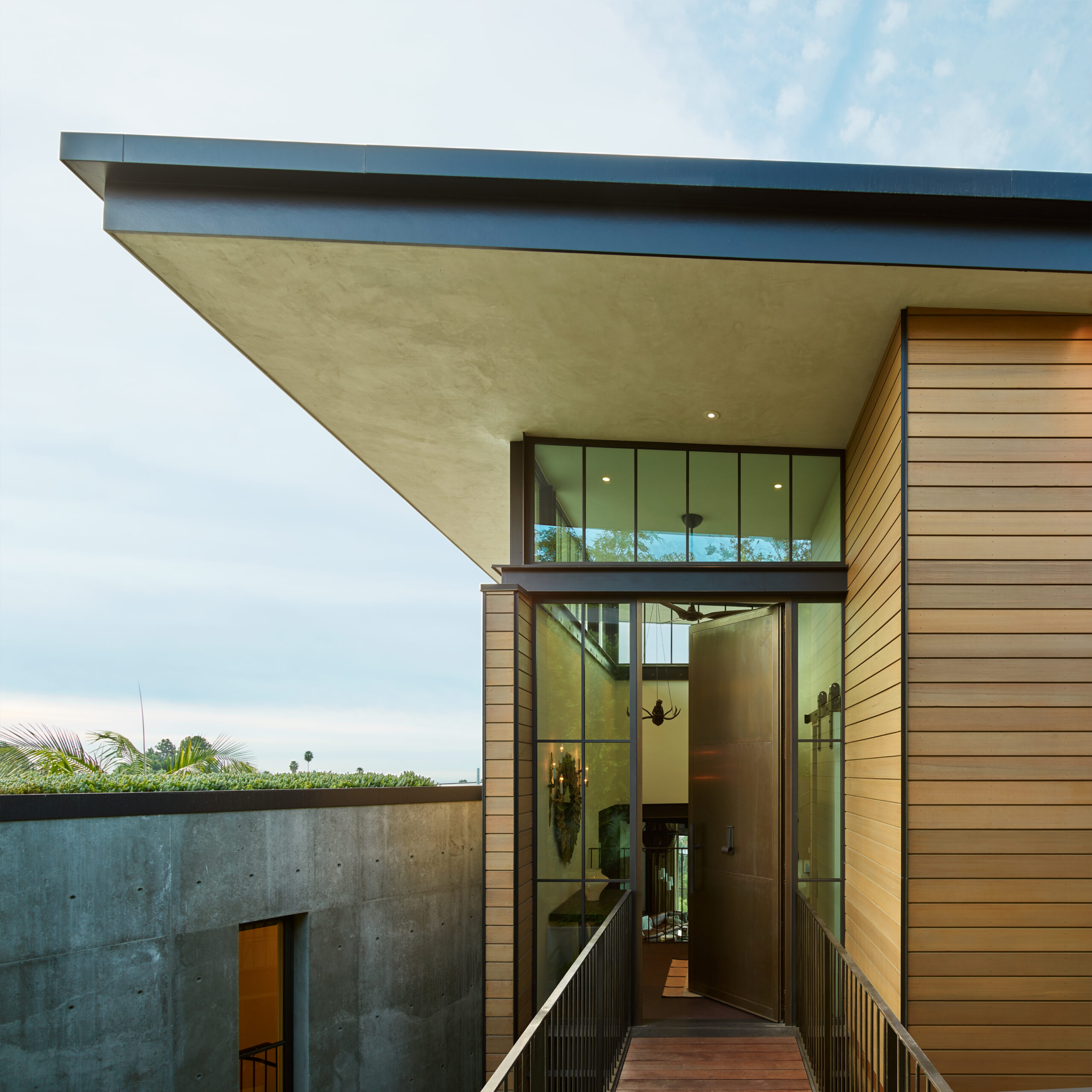 Becker’s mentorship at Olson Kundig can be seen in key architectural elements of the exterior, such as a vent-like cedar siding that covers the grand hall, which hangs over a small pool. Palatial Brombal steel windows provide exceptional views over the city. Landscaping captures the essence of the desert and frames the tasteful combination of metal, wood, and architectural concrete of the exterior. 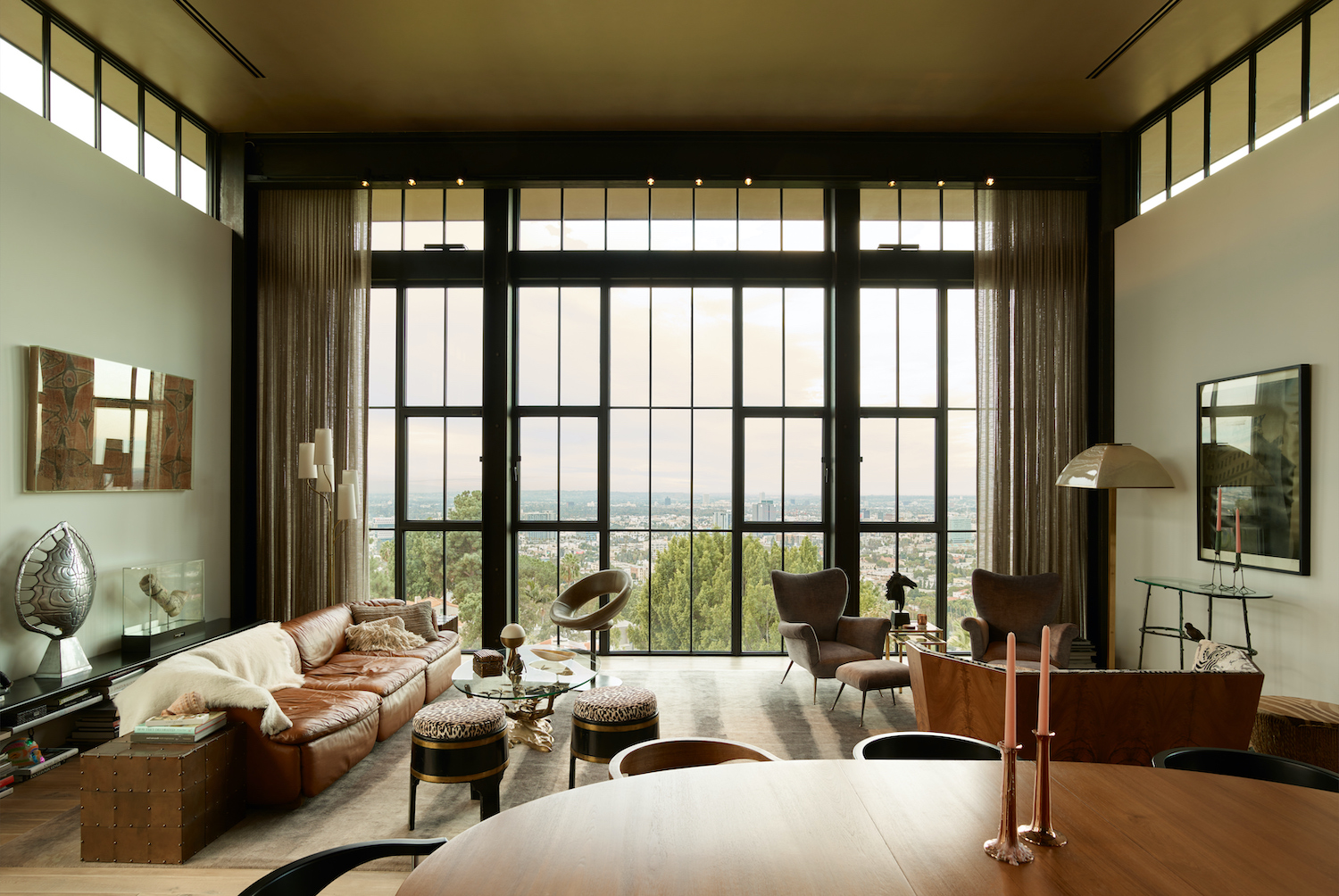 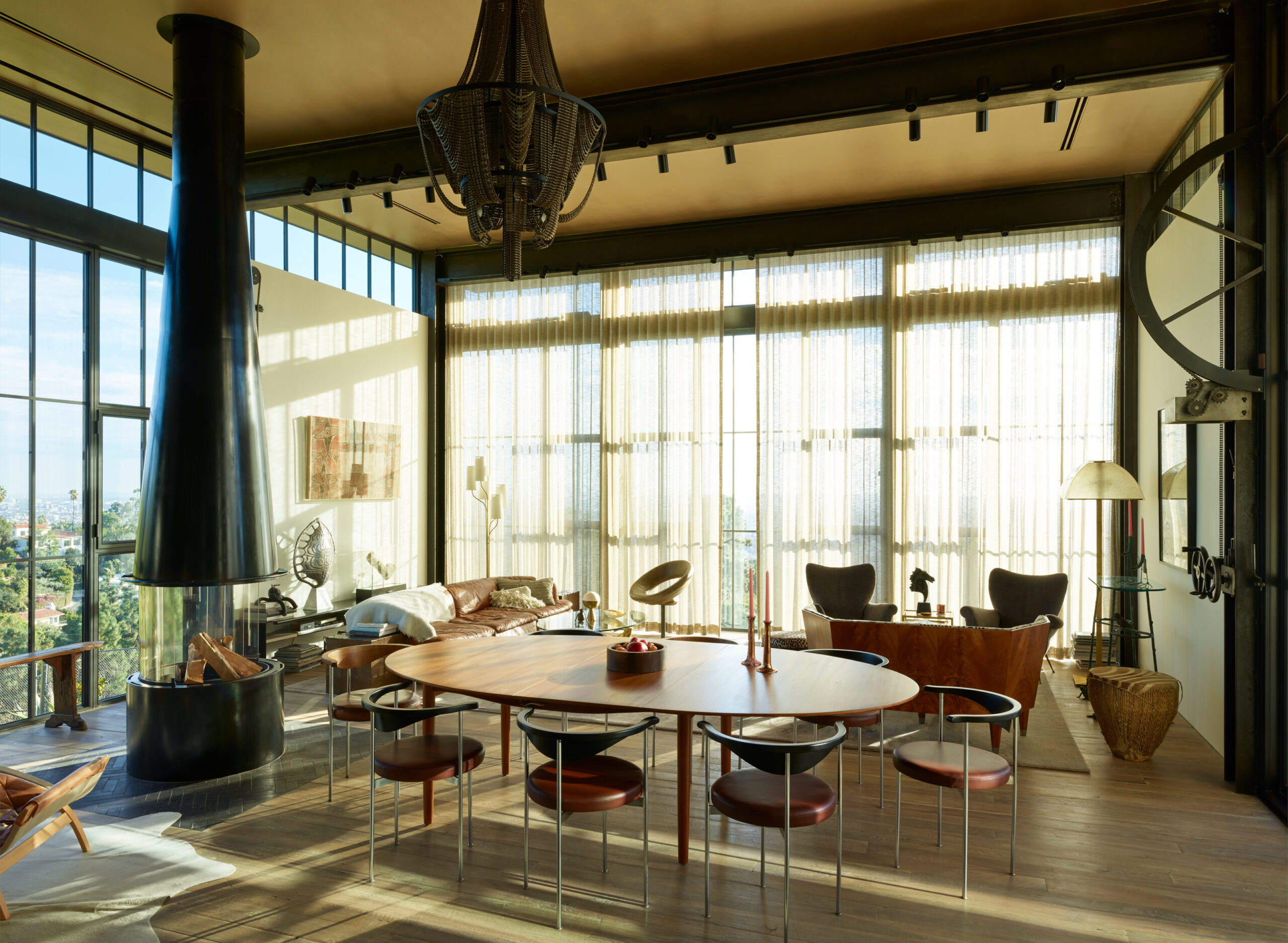 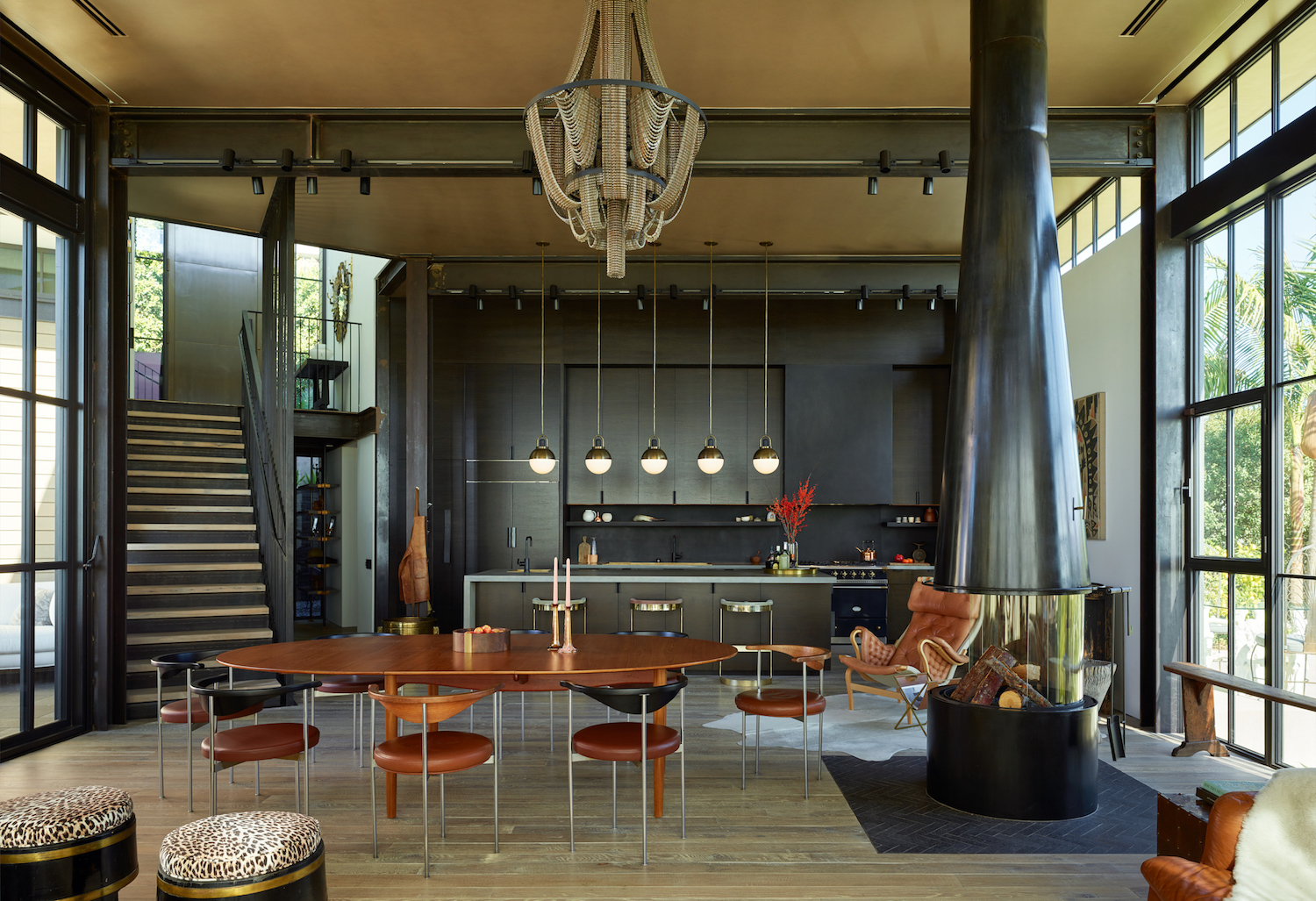 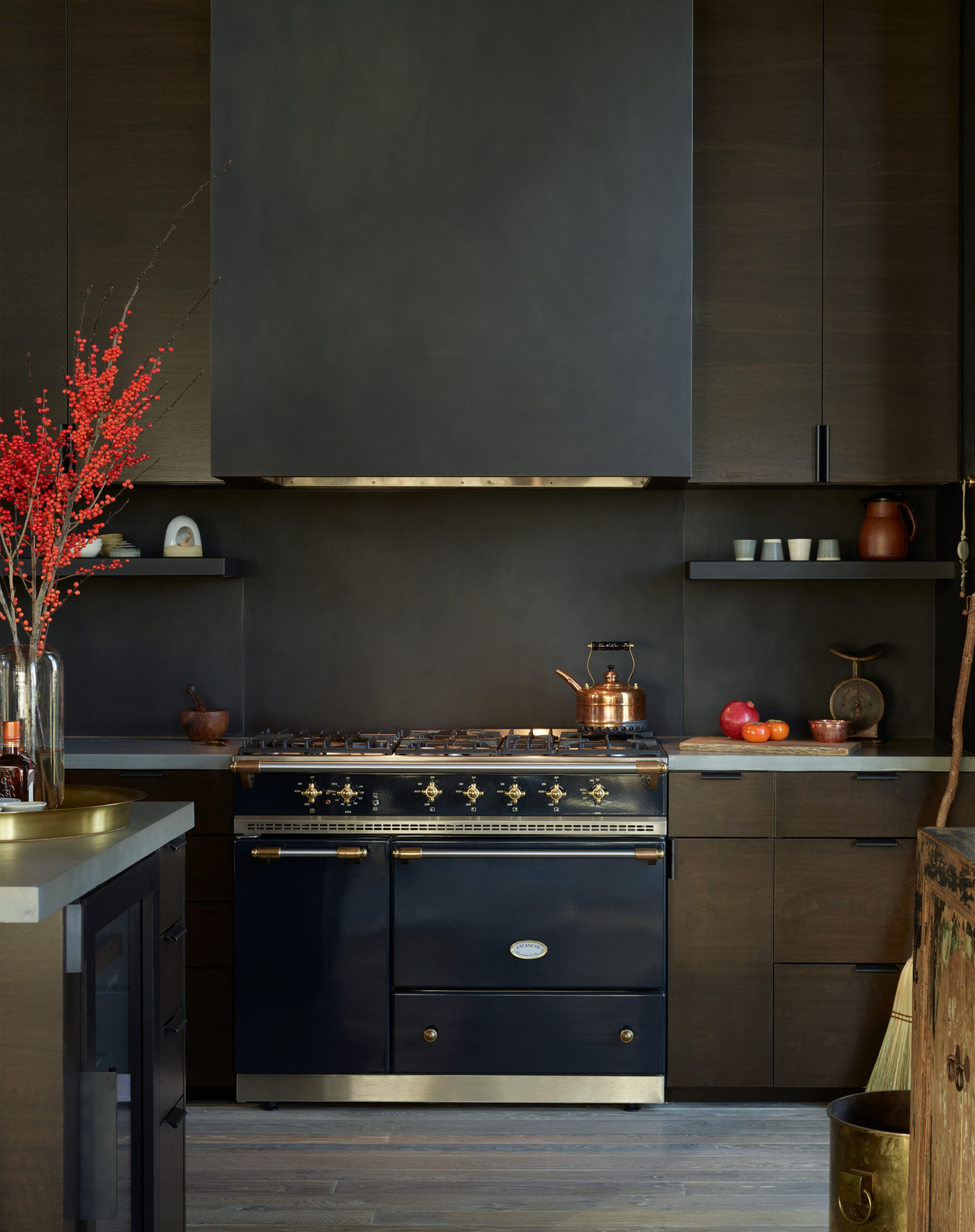 Inside, the primary living space, inspired by a great hall, is down a set of stairs. Also on this main level are two bedrooms meant for kids, two terraces, one looking east and the other west, the secret garden, and a workshop. The great hall is opulent and tasteful, with modern blackened steel and walnut-veneered cabinets in the kitchen area, while the living area reads more like an anthropological gallery. A heavy metal gear-and-chain pivoting window (another nod to Kundig)  allows the space to shift, opening up onto the east terrace and secondary dining room. 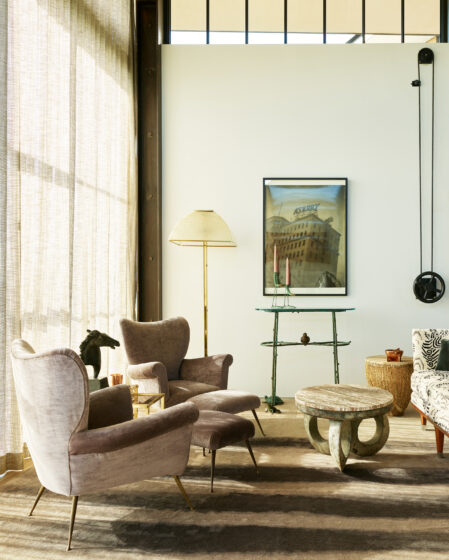 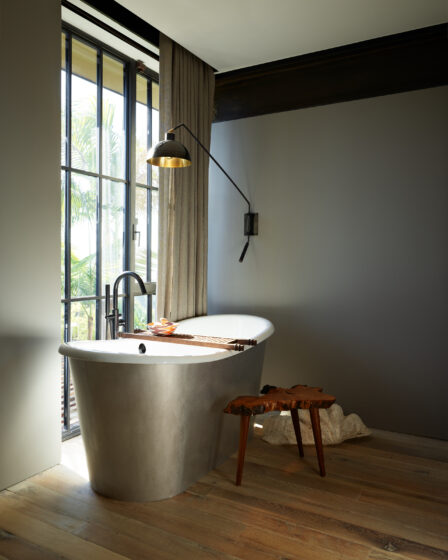 Below, an expansive media room shares a see-through fireplace with the hot tub and pool area outside. The upper level is dedicated primarily to the master bedroom and bathroom. Floors and stair treads are antique fumed oak, walls are cast-in-place concrete or clad in stained cedar siding, as well as accents of blackened steel and copper. 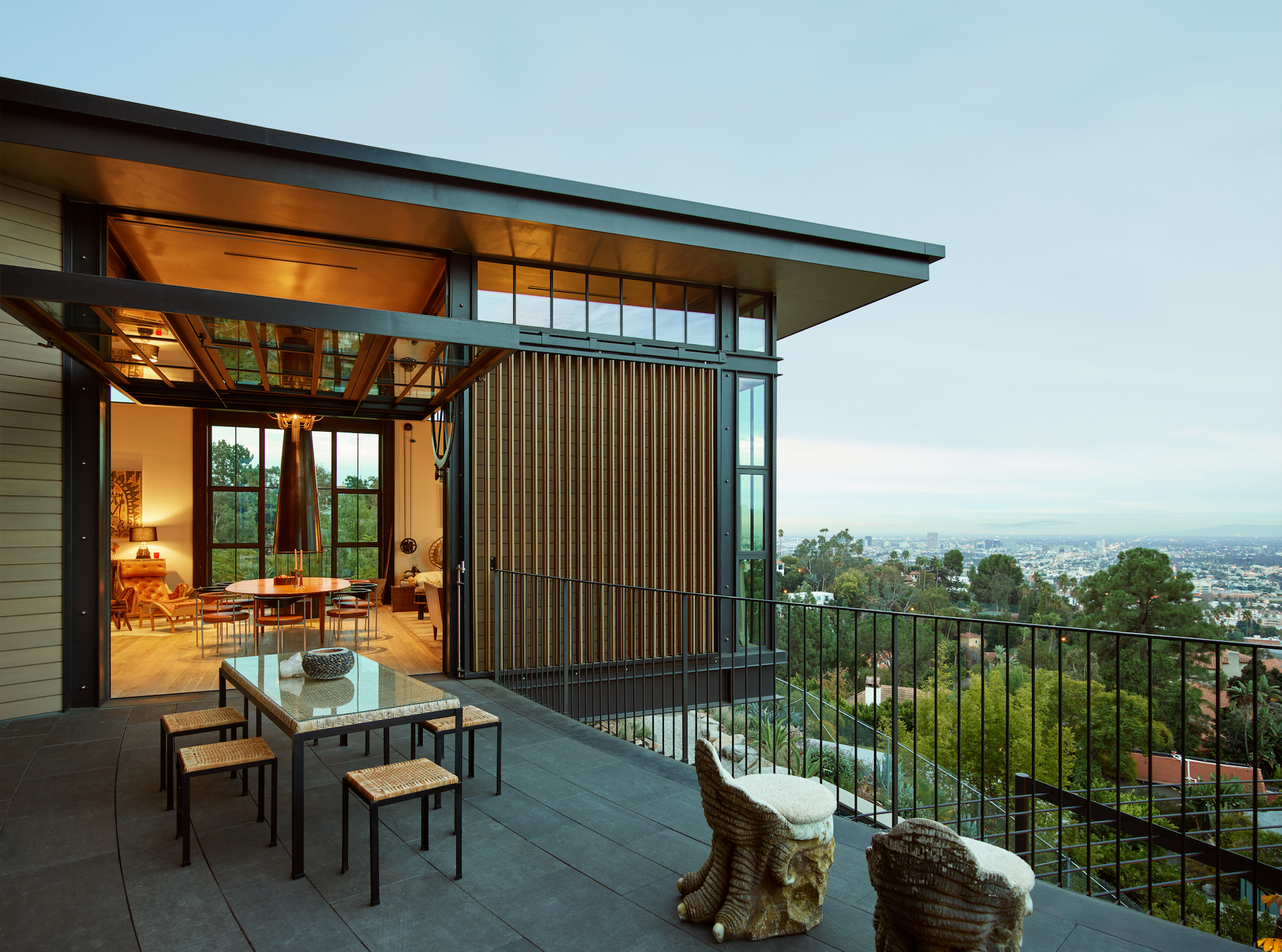 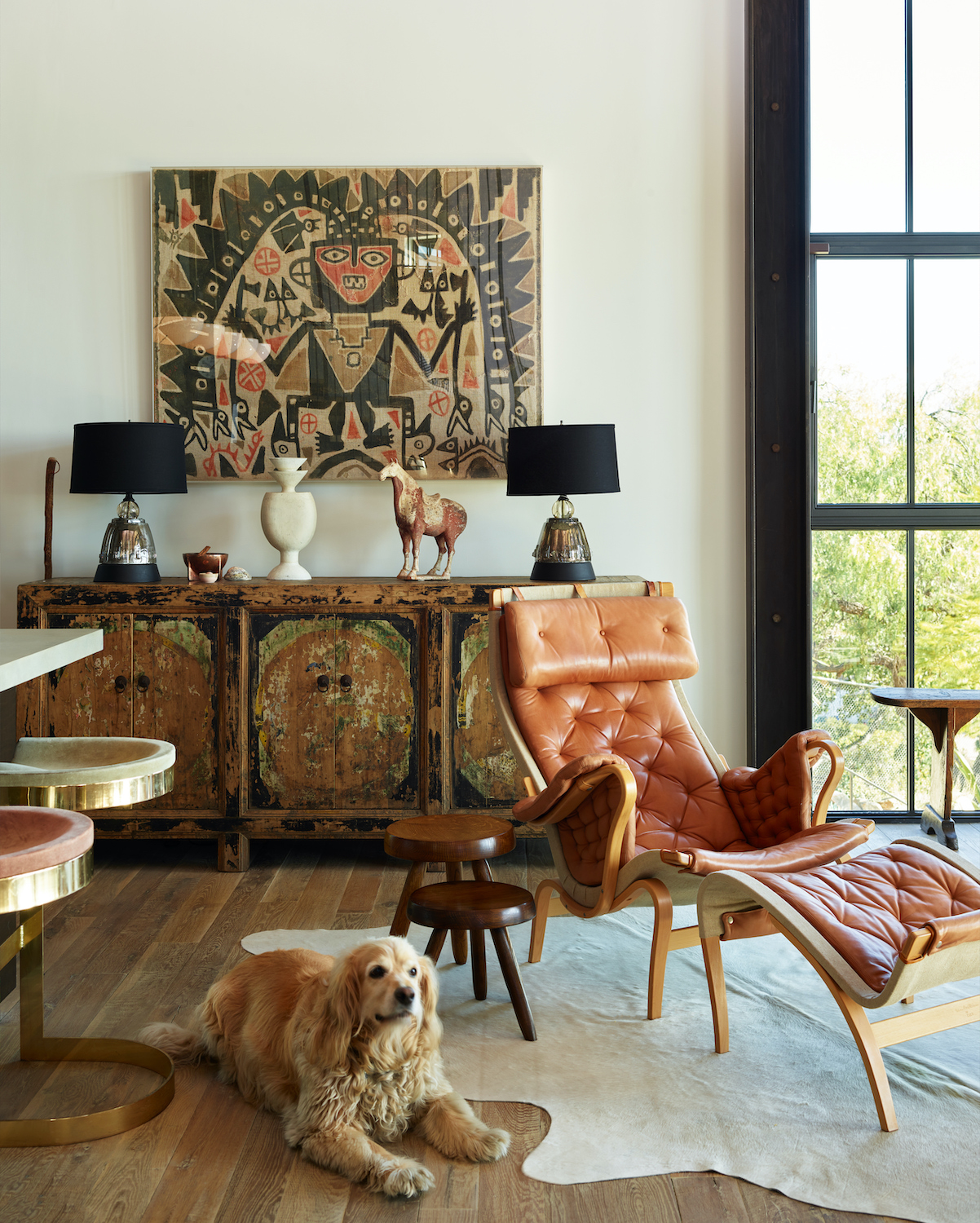 Overall, the structure is a nod to the famous Case Study Houses of California. It is meant to be shown: a path across the bridge and through the home is incredibly natural for the visitor. On the other hand, the intimate and family areas of the houses are tucked away, mostly closer to the mountain, to ensure protection and privacy. 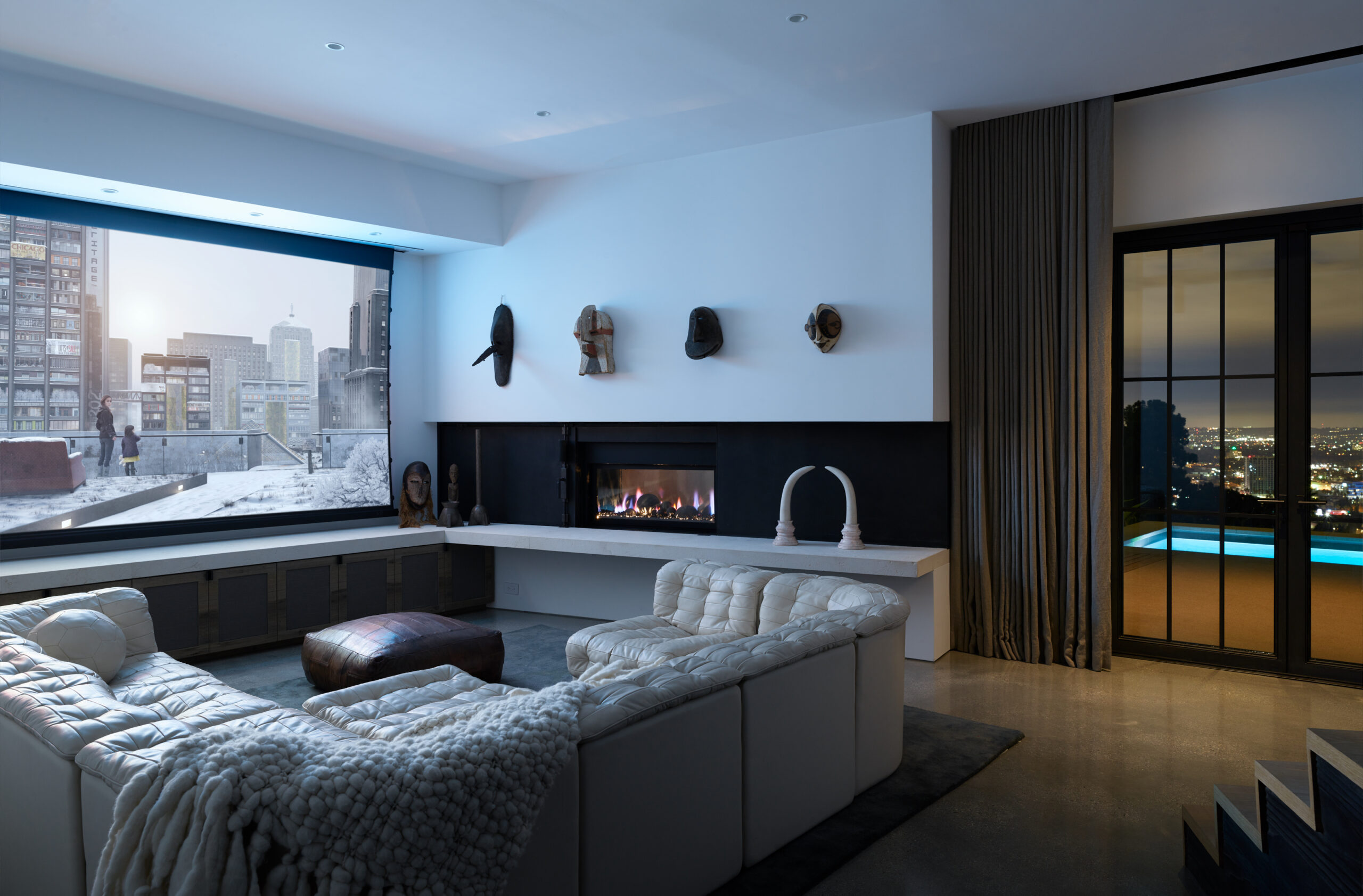 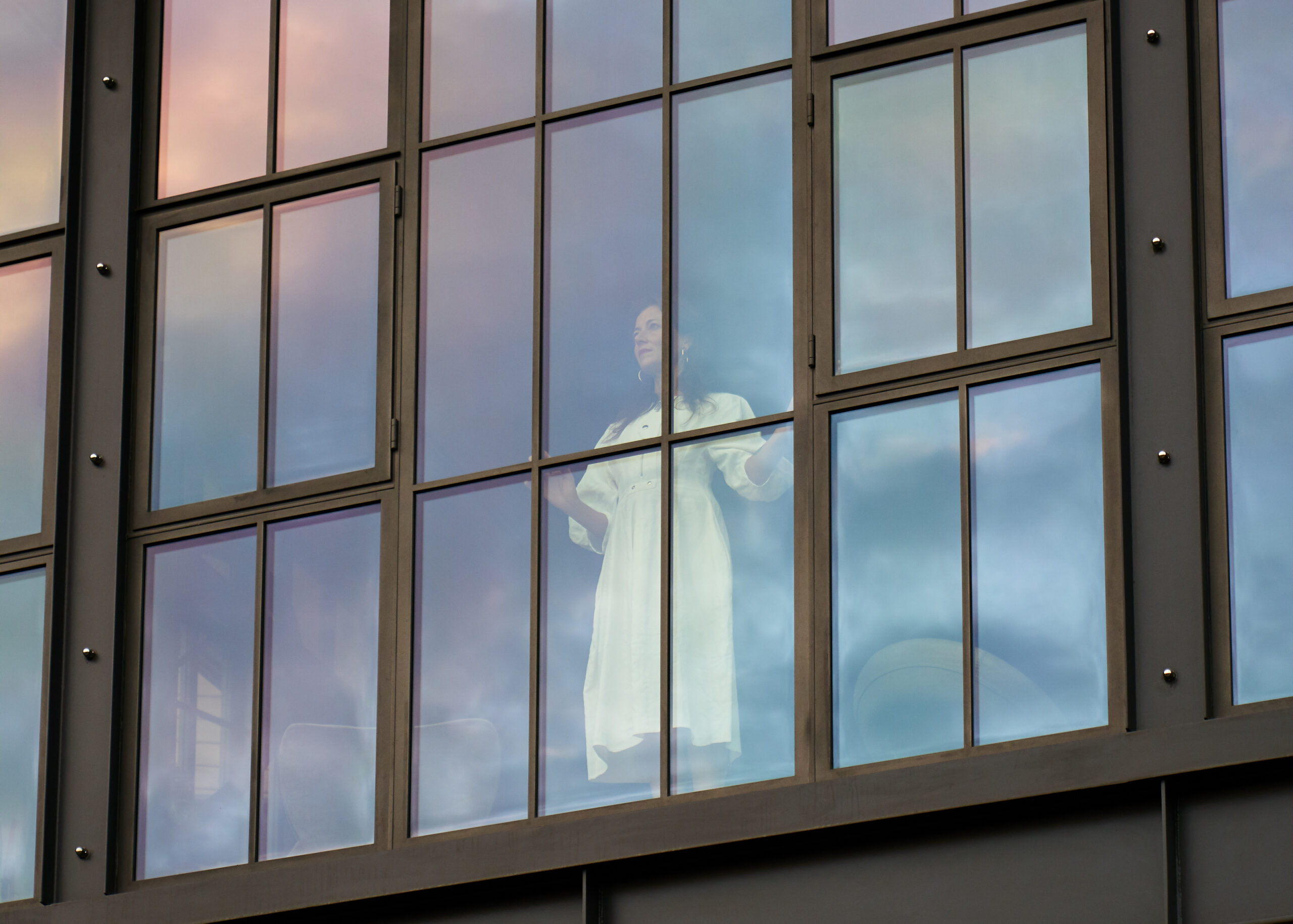