Geography has blessed the Japanese island of Hokkaido, which averages many meters of fresh snow during a typical January. Dry, frigid Siberian winds mop up moisture over the comparatively warm Sea of Japan before reaching the northernmost and largest of Japan’s forty-seven prefectures. That water then falls as the finest, fluffiest champagne powder imaginable, giving Hokkaido its nickname, Yukiguni, or snow country.

This is not the Japan of dazzling neon-lit skyscrapers, bullet trains, or Shinto shrines. Instead, Hokkaido is primarily known as a winter sports destination, with increasingly fashionable resorts like Niseko – the Aspen of Asia – attracting powder hounds from far and wide, and the capital city Sapporo, still associated with Winter Olympics glory. But venture beyond the boundaries of Hokkaido’s ski resorts, and you’ll discover a laid-back, rustic culture where people still embrace nature with as much enthusiasm as residents of Tokyo devour the latest high technologies.

So, how much can you experience during a wintry week’s meander through Hokkaido? Plenty, including a day spent snowcat skiing at the historic ski area of Chisenupuri, just a fifteen-minute drive from Niseko Village near the onsen (spa) town of Rankoshi. Launched back in 1977, “Chise” was once a local favourite, consisting of a single lift, a modest day lodge, and a small hotel near YukiChichibu Onsen. Shuttered in 2012, it was revived in 2016 by Hokkaido Backcountry Club, a group of expats who now run a snowcat operation  that will shuttle you to the top of Chisenupuri’s single ski run for your own private powder experience. 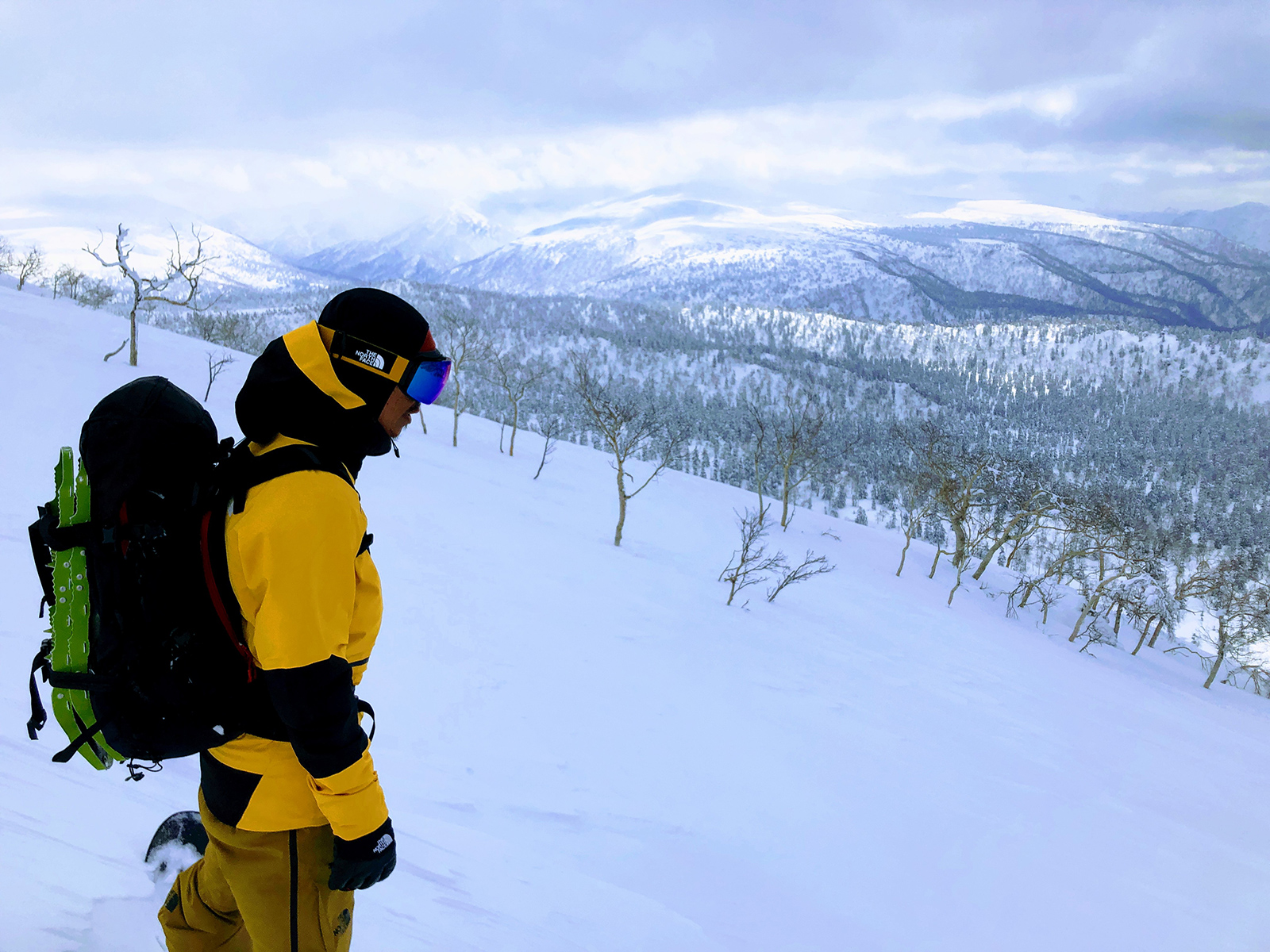 For truly spectacular backcountry skiing, head to Daisetsuzan National Park in central Hokkaido, the largest national park in Japan. Here, you can cruise down the side of Hokkaido’s tallest mountain, Asahi-dake, an active volcano pockmarked by fumaroles that regularly emit sulphurous steam and gas. Easily accessible via a cable car near the spa village of Asahidake Onsen, Japan’s most popular off-piste playground averages an astonishing fifteen metres of snow per season. Exiting the cable car, you can descend down several hundred metres of winding, mellow cat tracks that cut through stands of aspen trees. Or really earn your turns by first skinning up Asahidake’s steep sides to reach one of its steaming volcanic vents before pointing your skis down this iconic mountain’s conical slopes for the geothermal run of your life.

Plenty of natural wonders can also be found beyond Hokkaido’s national parks during winter. In the wild expanse of Kushiro Marshland, Japan’s largest wetland habitat located in the eastern part of Hokkaido near a village called Tsuruimura, red-crowned cranes breed at the Tsurui-Ito Tancho Sanctuary, a protected sanctuary. Considered a symbol of happiness and long life and said to live for a thousand years, red-crowned cranes are often observed in effusively choreographed mating dances set against a backdrop of snowy marshlands, making it easy to see why the Japanese refer to the crane as the “bird of happiness.” 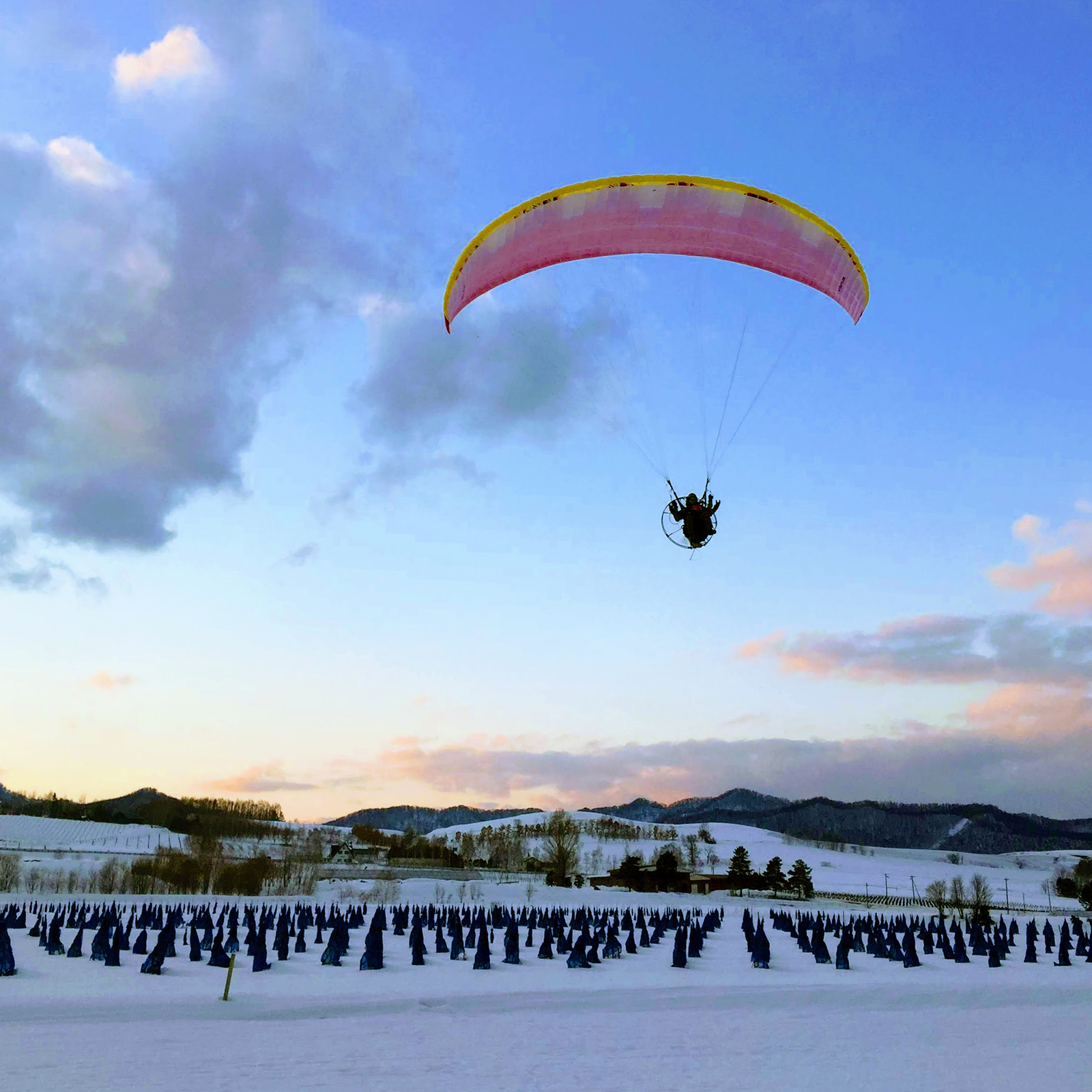 A tandem motorized paragliding ride across Hokkaido’s snowy fields is a popular activity.

Bird watching is also popular on the frozen shores of Sakhalin spruce lined Lake Kussharo, the largest of the three caldera lakes that comprise Akan National Park in eastern Hokkaido. Here, in the ancestral home of the last remaining Ainu, an indigenous people considered to have been Hokkaido’s original inhabitants, you can spot a Steller’s sea eagle and encounter large flocks of regal whooper swans from Siberia and flotillas of other migratory birds swimming in the volcanic hot spring-fed pools that disrupt the Akan’s otherwise frozen shoreline. Entirely rarer would be sighting Kusshii, the Loch Ness-like monster said to inhabit this otherwise benign lake.

If all this outdoor activity sounds a tad chilly, fear not, because you are deep in the land of all-season onsens, the natural geothermal hot springs for which Hokkaido is famous. Many onsens are located next to ryokans, traditional Japanese country inns typically offering tatami-matted rooms that dot Hokkaido’s countryside. An outstanding example is tranquil Yuyado Daiichi, a Ryokan first built in the 1920s at Yoroushi Hot Springs. Soaking those sore ski muscles here in a series of outdoor onsens overlooking a river set amid fragrant Japanese hinoki trees will wrap you in a warm blanket of Zen-like calm. And Yuyado Daiichi restaurant’s signature multi-course meals featuring delicacies like steamed Japanese taro dumplings with conger eel, Sakura soba, grilled Spanish mackerel, and delicate matcha cakes for dessert, will dispel any lingering doubts you are not already in Hokkaido foodie heaven.