There are few industries unaffected by COVID-19—and fewer still that have actually boomed because of it—but the animation industry seems to be having a moment right now. While live film sets are hindered by the need for people working in close proximity, animation is mostly done remotely anyways. And as many live film projects have been put on pause amidst social distancing concerns, animated projects continue to funnel through.

Watching animation provides a perfect balance of escapism and entertainment during times like this. And not only for younger audiences. Since The Simpsons aired 30 years ago, the realm of adult-oriented animation has been broadening. Shows like Family Guy, South Park, and Beavis and Butt-Head sprang from the new standard The Simpsons had laid out: cheeky, if at times crass, humour that has no limits—bouncing between funny and offensive—and neatly packed into 22-minute segments.

But with the introduction of streaming services like Netflix and Hulu, the standard that cable shows set has been poked and prodded by increasingly unconventional and niche films and shows. Without advertisers as an intermediary, streaming content can act as a direct link between creators and consumers. For animated shows and worlds, which are only bound by the imagination of their creators, this freeing of conventions has led to a golden age of diverse shows that are constantly pushing the boundaries of what we expect from adult animated shows.

Some have been successful, others not as much. While Tuca & Bertie, a show about two bird roommates, was cancelled after one season, BoJack Horseman, Netflix’s original series about a depressed horse actor, has been heralded as a huge success and the most important animated series since The Simpsons. The series, while unassuming when it first aired in 2014, became known for its nuanced and realistic portrayal of depression. Taking sharp turns from humour to quiet moments of emotional depth, BoJack opened the doors for nuance in the conventionally slapstick comedic world of adult animation.

The poignancy of the show’s depiction of mental health is at times stark, particularly against the backdrop of an absurd world where humanoid horses sink into existential depressions, but it’s this contrast that makes the subject matter that much more striking. Animated shows, when executed eloquently like BoJack, have an ability to tap into the human condition with remarkable potency. 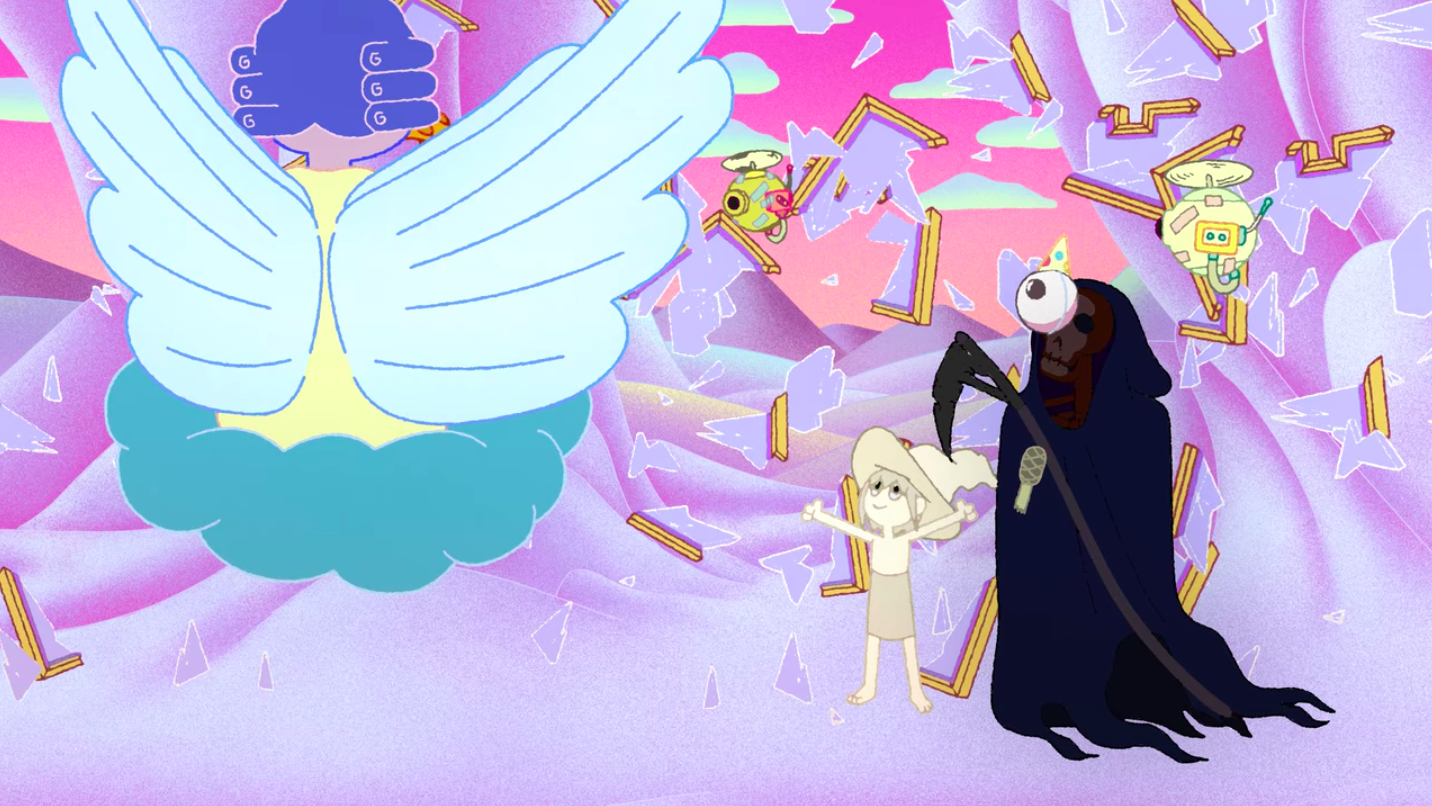 Clancy interviews Death in The Midnight Gospel. Image from Netflix.

Netflix’s latest offering, The Midnight Gospel, is another show reforming the idea of adult animation. It is a collaborative project between Adventure Time’s Pendleton Ward and comedian and actor/podcaster Duncan Trussell. The show takes selected (and sometimes re-recorded) audio of interviews from Trussell’s podcast and aligns it with Ward’s inventive animations based in an alternate world. Trussell’s character Clancy traverses simulated worlds interviewing subjects—ranging from a fish-man with a ship crew of cats (voiced by Damien Echols) to Death herself (voiced by mortician Caitlin Doughty)—for his “spacecast.” Here, narrative plotlines are sidestepped for more abstract viewing.

The juxtaposition of the philosophical, perspective-changing conversations and the almost hallucinogenic animations allow the show a dual viewing experience. One can choose to immerse themself in the subject matter of the conversation or the mind-bending animation—focusing on both at once feels impossible, and unnecessary. Taking the best from the worlds of animation and podcasting, the show unites two incredibly popular forms.

Whether it’s the familiar favourites or the new shows at the vanguard of niche animation, adult animated shows evoke a balance of reality and fantasy, an optimal measurement for believable escapism. In anxiety-ridden times, there’s something comforting about stories that are removed from our reality entirely, yet rooted in human emotion.

Your Guide to Shopping Emily In Paris Style

How to Upgrade Your Home Entertainment System in Style