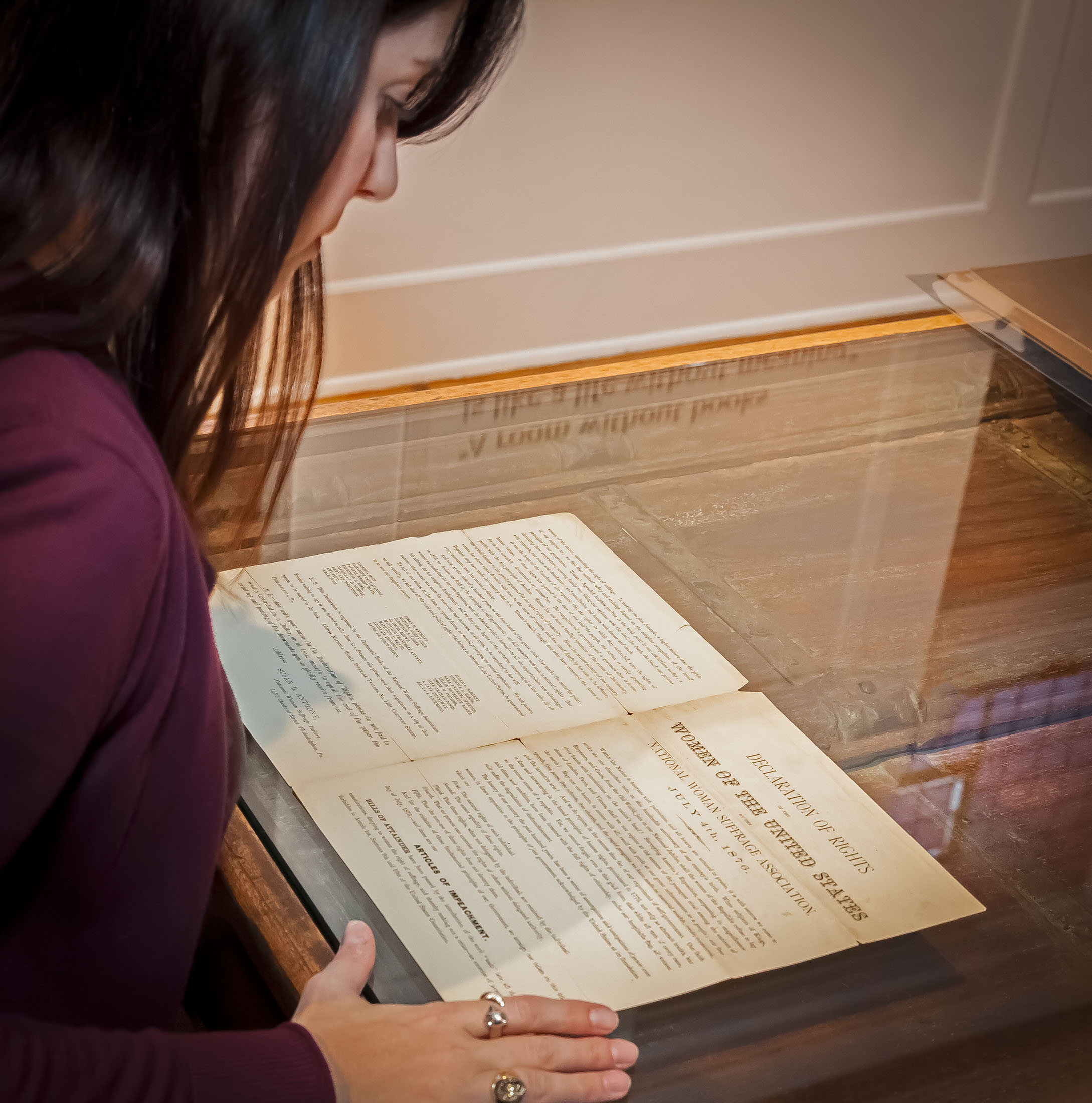 There is a certain indescribable but instantly recognizable aura surrounding an independent bookstore. It’s even stronger when you step inside a shop that sells rare and antique books—the energy in the room feels charged. It may have something to do with the stories tucked away in the pages of old books, moments in history that we have only heard about second-hand. When reading a first-hand account of the suffragette movement or a first-edition Jane Austen, we are transported to that moment in time. It can make you feel like you hold history in your hands. It is a feeling that Miranda Nesler and Dan Whitmore have experienced time and time again. At their bookstore, Whitmore Rare Books in Pasadena, California, they mine history to find the stories of individuals who would otherwise be left behind.

“I deal with handwritten material,” says Nesler, an associate of the store and its resident specialist on women’s history. “And frequently it’s women whose names would have been lost to history, except that they decided to keep a diary or a journal or sketchbook. Sometimes because of certain dates and regions, you can have a gut instinct that what shows up in [the material] might be interesting or good, but you don’t always know.”

Recently, she was combing through a diary written by a young woman who lived in a Quaker community outside of Rochester, New York, in the mid 1890s, when the women’s movement and the Abolition movement were taking root in that area. She chose to investigate the text because odds were the writer would reference the women’s movement and its key players, Susan B. Anthony and Elizabeth Cady Stanton, at some point. “That was my hope anyway,” she says. “I wound up discovering something even better.”

This seemingly random, unimportant person was an eyewitness to a public oration held by African-American abolitionist and women’s rights activist Sojourner Truth. Truth visited the young Quaker woman’s community to speak and fundraise on behalf of recently freed slaves, to assist them in acquiring land out west where they could begin their lives again. “My assumption had been that it would be women’s rights oriented, but it wound up being abolition oriented,” Nesler explains. “It wound up giving me contact with a really powerful African-American woman speaker and writer where you don’t get to see a lot of material about her. It was an incredibly unique thing.”

‌Ivory busts of literary personalities keep watch over the rare books at Whitmore’s, some of which are the only existing copies in the world. Photo by Sheena Lad, Photo Nutrients.

Whitmore Rare Books was launched as an online retailer by Dan Whitmore in 2010, when he made the leap from being a lawyer fresh out of law school to a rare book dealer with no road map. After learning some hard lessons and building a world-class reputation, he opened his brick-and-mortar store in October 2018. Ever since, he, Nesler, and the team of art directors, photographers, and graphic designers have been carving out a niche with a series of curated catalogues showcasing women and people of colour.

When he was in law school, perusing bookstores looking for his next read, he stumbled upon the first first edition he would ever own, For Whom the Bell Tolls. “[It’s] currently sitting above my shoulder in the shop as a reminder of where I started and what book got me really hooked,” he says. (He adds proudly that he picked it up for less than $5—a steal, really).

The shop is classic, what you’d imagine a cigar-smoking grandfather’s personal library might look like: cozy, inviting, and decked out in dark wood with leather chairs. Ivory busts and bronze figurines of Shakespeare, Dickens, and other literary personalities punctuate the shelves, keeping watch over the books, some of which are the only existing copy in the world.

Every year Whitmore Rare Books produces three catalogues, a bind-up of the best of the store’s inventory with excerpts and images, as well as context and commentary written by Nesler and Whitmore. The two main catalogues, released in spring and fall, are intended to communicate with existing clients and establish new ones by illustrating what the store has to offer and drawing together some of the most exceptional examples into a beautiful hard copy (you can find pdfs of the catalogues on their website too).

The most recent catalogue, In Her Own Hand, is entirely dedicated to women and is the second annual “diversity” or “equality” catalogue curated by Nesler. “So far [the catalogues] have focused on women, but I’d like to continue to see us press on the idea of including more diverse groups of authors,” she says. The first catalogue she created, In Pursuit of Equality, was released last year and focuses on women and the men who assisted them in political activism: the pursuit of the right to vote, the pursuit of employment equality, and the pursuit of education. 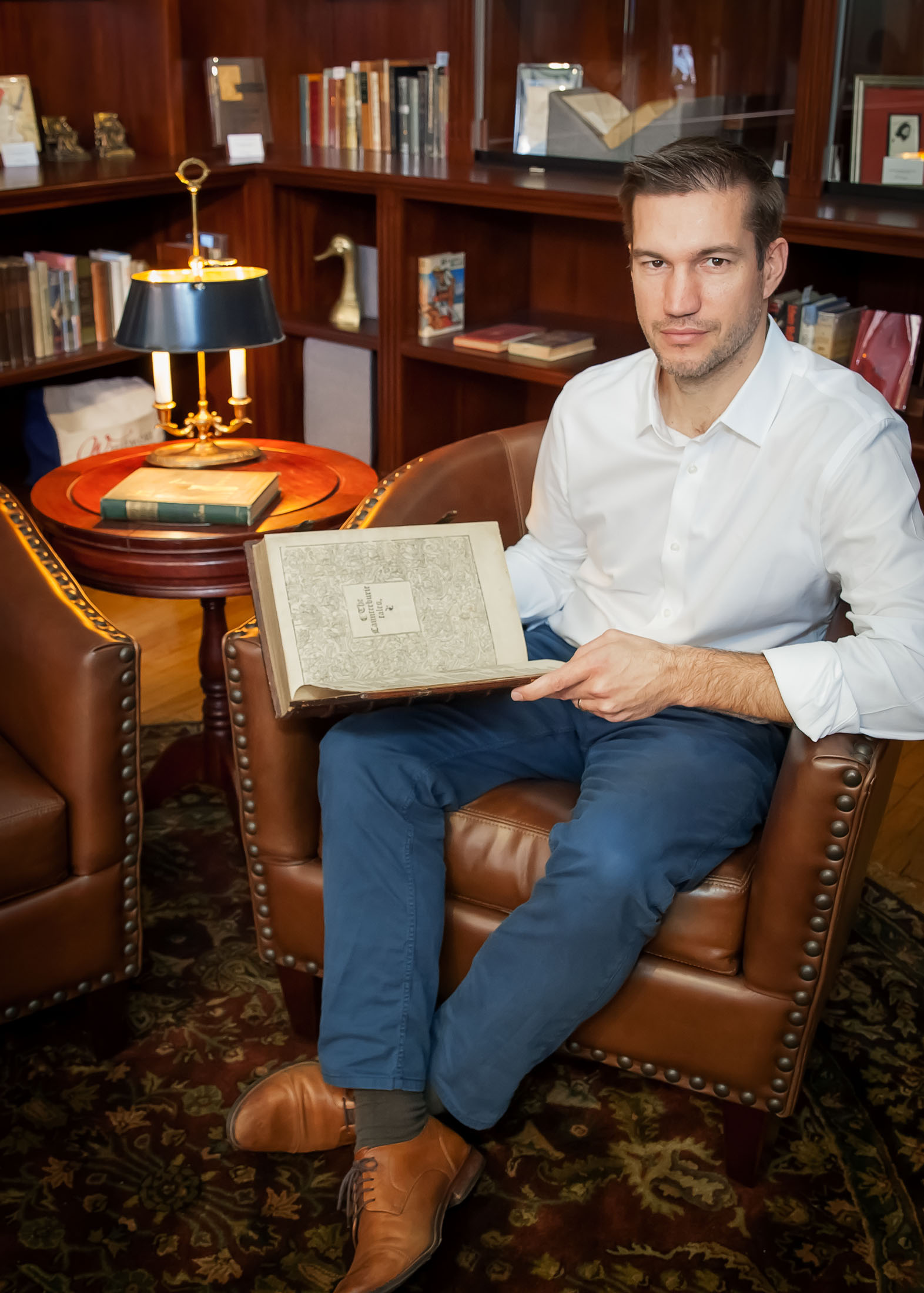 Dan Whitmore, a former lawyer, is the founder and president of Whitmore Rare Books. Photo by Sheena Lad, Photo Nutrients.

This year, Nesler says, “We’ve pulled together pieces that are only written by women, and that gave us an opportunity to really focus on the diversity of what that category means.” It not only features works by women such as Susan B. Anthony and Elizabeth Cady Stanton, but LGBTQ+ women including Jane Addams and Frances Willard, women of colour such as Angela Davis and Angelina W. Grimke, and writing about the experiences of Indigenous women. Nesler is quick to emphasize that neither of the catalogues represent the entirety of their holdings on women, but instead pull together some of the most exceptional and important examples.

Whitmore and Nesler want to cause a stir. The first work they purchased for In Pursuit of Equality, and the one they put on the cover, is the “Declaration of Rights of the Women of the United States by the National Woman Suffrage Association”. “It was a really exceptional piece that I didn’t know if I would ever get to see in my lifetime, because there were only 10 documented in the world,” says Nesler. “And then suddenly this 11th one was discovered, and we had it. I got to see it every day when I walked into the shop, and it stirred me. It was an exceptionally powerful thing.” The two continue to push the envelope with In Her Own Hand by opening with a piece from 1898 entitled, “Bible and Church Degrade Woman” (sic) by Elizabeth Cady Stanton.

“The thing that really stood out to me was the first edition of ‘Sir Patient Fancy’ from 1678,” says Nesler of her favourite item from the most recent catalogue. “It is a first edition of a play by Aphra Behn, who is the first professional female playwright in England. She was the first woman legally allowed to produce and publish plays under her own name and make money off of it. You see her using the physical book of the play to communicate that she’s very confident in her authorship and that she’s going to use that to promote the cause of women. She has a number of incredible lines where she basically comes out and says why shouldn’t women be able to write as well as men?”

Nesler and Whitmore’s work puts into perspective the volume of female voices that have been pushed aside. As Nesler puts it, “If you look back in the historical records, we’ve fought in battle, we’ve led countries. We’ve shown just as much valour as the men who’ve written us out of the history books.” By producing catalogues like In Her Own Hand and holding space for these stories, Whitmore Rare Books is inserting their voices back into the historical canon. 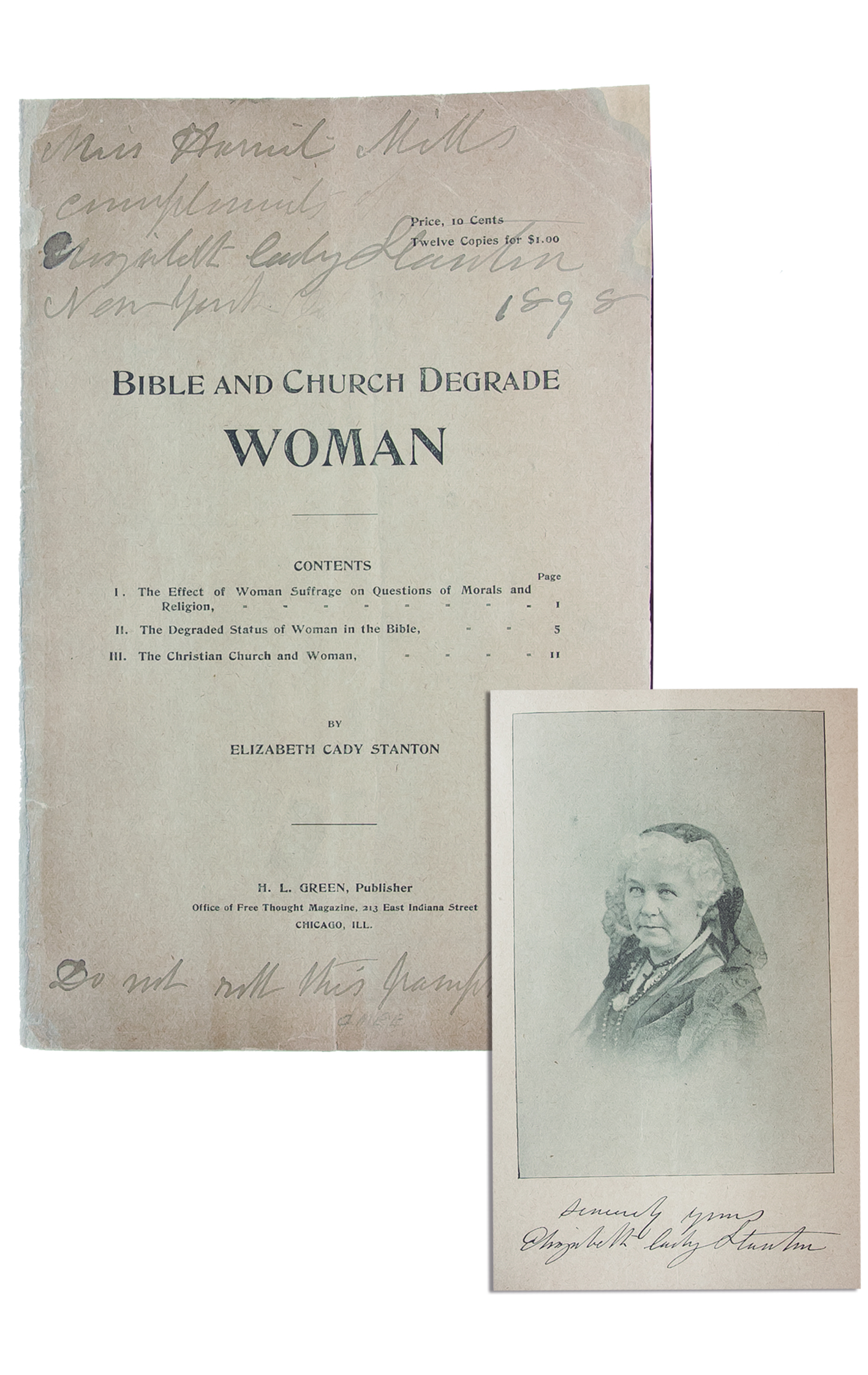 An 1898 copy of “Bible and Church Degrade Woman” (sic) by Elizabeth Cady Stanton opens the By Her Own Hand catalogue. 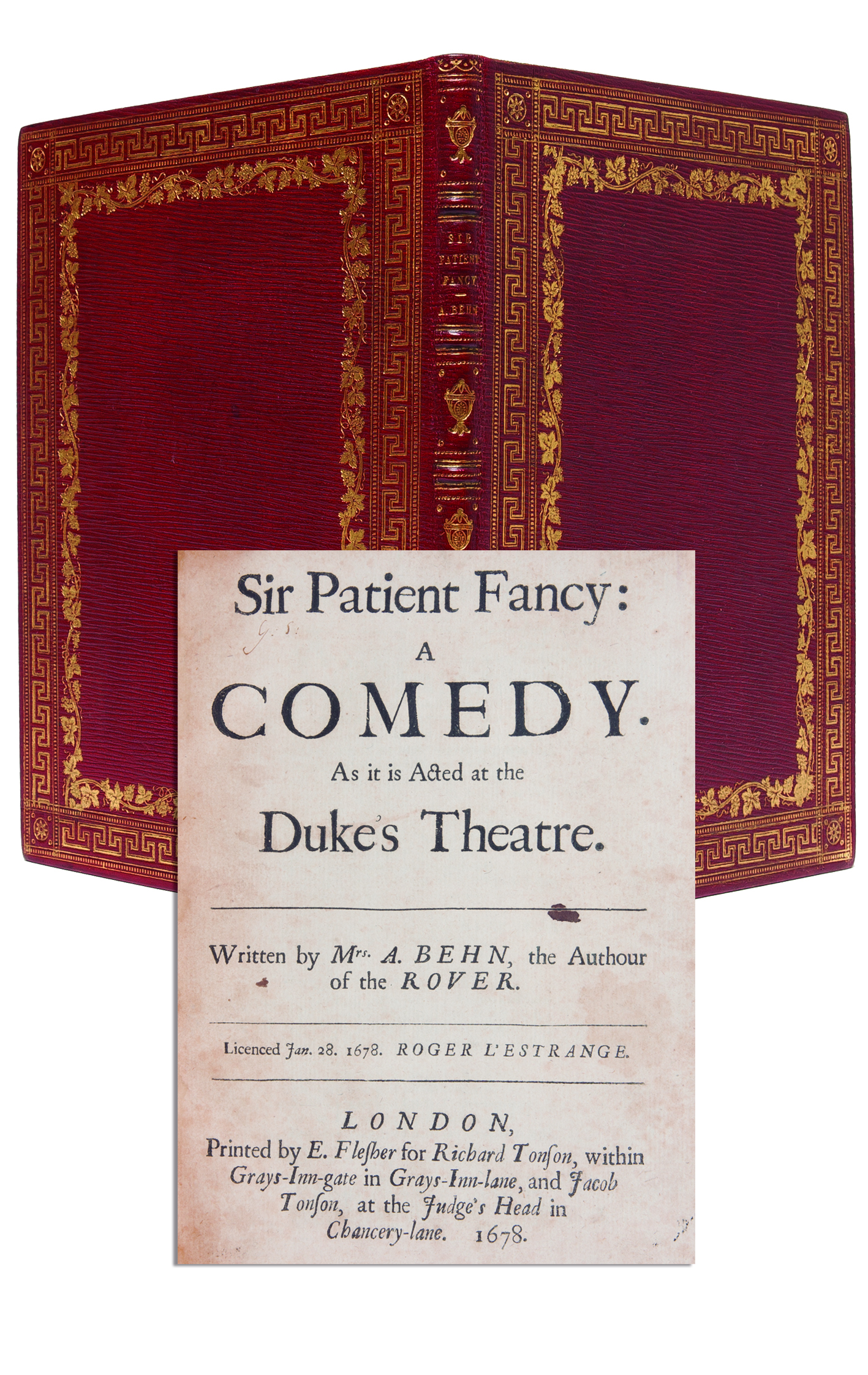 An annotated copy of “Sir Patient Fancy” by Aphra Behn is also featured in By Her Own Hand.

Who Lives, Who Dies, Who Tells Herstory