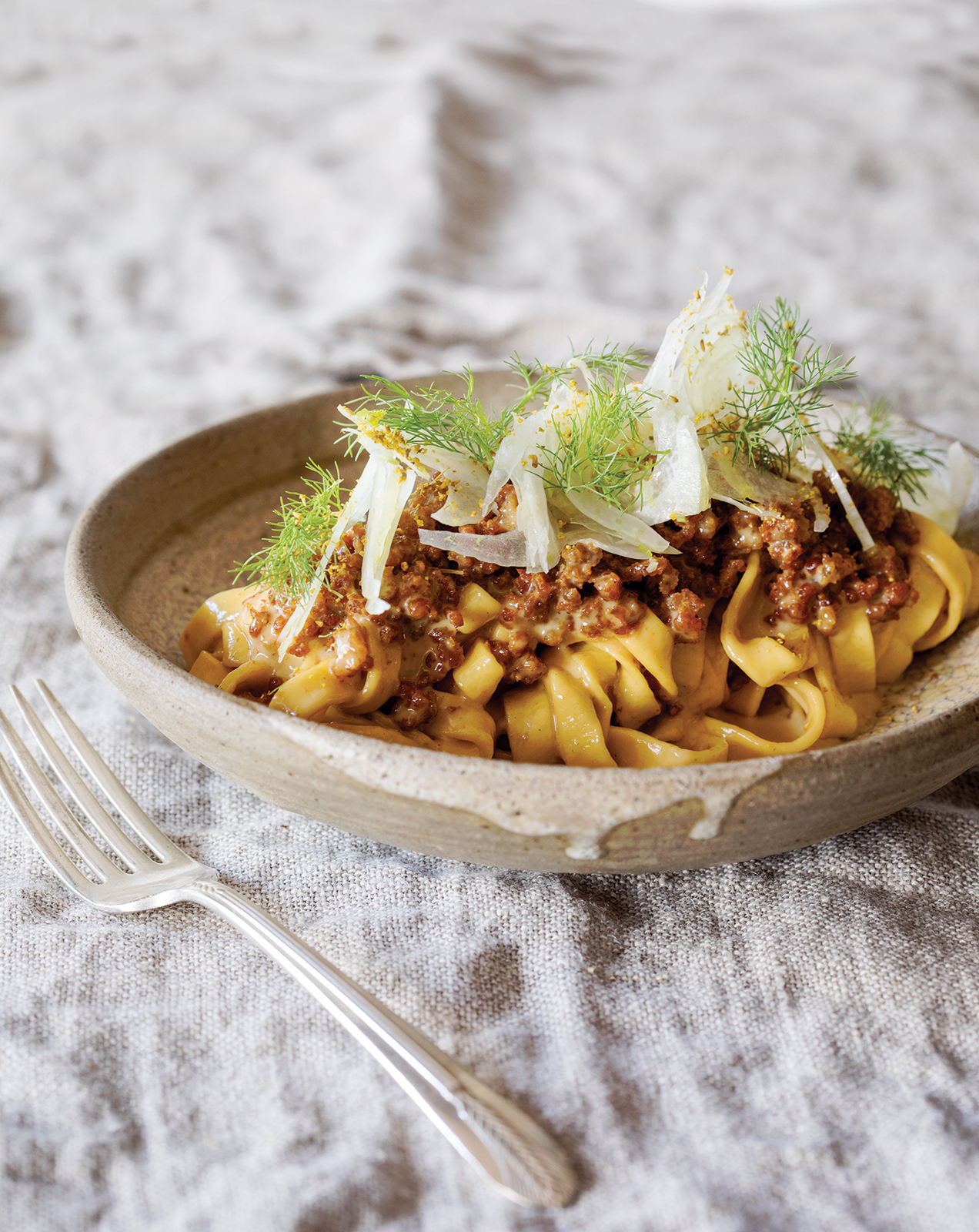 Chef Andrea Carlson has penned her own cookbook full of poetic recipes inspired by the ocean, the land, and the air, named for Vancouver’s beloved Burdock & Co.. Burdock’s menu—and the cookbook (out now)—reads like a paean to the changing seasons. Carlson spotlights the natural abundance of regionally grown and foraged ingredients, and her intensely vegetable-focused dishes shine alongside sustainable proteins from the land and sea. Below is an excerpted recipe from one a dish we consider to be the ultimate winter warming dish:

When people see this on the menu, they sometimes assume it’s pork bolognese, but I am not a fan of ubiquitous bolognese sauce. I want something more savoury, more umami. This dish is comfort food that speaks my language. I like to keep ragouts simple and quick so that each element adds to the sauce and doesn’t lose its nature through a lengthy cooking process. Here, the combo of caramelized pork, fennel seed, cream, and tamari creates a balanced and luscious sauce.

In a medium sized bowl, combine the two flours. In a separate small bowl, lightly beat the eggs. Add the eggs to the flour and mix together by hand until you have a rough ball. Turn out onto a semolina-dusted countertop and knead until firm and glossy, about 5 minutes. Cover and let rest for 1 hour. Roll the dough through a pasta machine on the largest setting, reducing the thickness with each turn until the next-to-last setting. Cut the sheets by hand into pappardelle noodles, about ¾ to 1 inch wide. Toss with semolina flower to prevent sticking. Cover until ready to cook.

In a heavy-bottomed sauté pan over medium-high heat, heat the grapeseed oil and deeply brown the pork. Drain the fat from the pork and set the pork aside. Deglaze the pan with the butter and add the onions and celery. Sweat the vegetables until they are translucent, about 5 minutes. Deglaze with the white wine and red wine vinegar and cook off the liquid until dry. Add the Red Wine Jus, bay leaf, salt, fennel, and tamari. Add the pork back to the pan. Cook for 5 minutes, until the ingredients are incorporated and saucy. Remove bay leaf. Stir in the cream at the end to finish the sauce.

Trim the tough outer layer of the fennel, cut out the inner stem, and shave the bulb very thin on a mandoline. Toss with a splash of olive oil and a sprinkle of salt. Bring a large pot of water to a boil. Add plenty of salt and blanch the Pappardelle until tender, about 2 to 4 minutes. Drain. Pour the hot Pork & Fennel Ragout over the Pappardelle and toss so that the ragout coats the pasta. Divide among four or six plates (depending on how much pasta you like to eat!) and top each with the shaved fennel and fennel fronds.

The Pourhouse’s Perfect Mulled Wine to Kick-off the Weekend