This novel is one of unacknowledged bravery. It tells the tale of kinship forged by a group of women performing underground abortions in Newfoundland. Harnessing the lilt typical of Newfoundland speech, Aimee Wall conveys the quiet hope and desperation of these women, caught in the cycles of a sleepy culture where secrets run deep. As the title suggests, Jane represents multiple women. The individuality of the characters melts into the shared goal of providing safety through anonymity and consistency. This multivocal approach places this novel firmly in the tradition of community-oriented story, with a focus that is diffuse yet incisive.

Marthe answered texts and emails on her phone at night in bed. She had been avoiding it, not knowing how she would explain herself, what she was doing at home. But it turned out she didn’t really need to explain herself. Nobody was insistent, there were no burning questions. She was young and unattached enough that an impulsive sojourn elsewhere wasn’t suspect; she hung around the fringes of enough artistic social circles that she could get away with vague gestures at a “project” if necessary. Marthe amused herself with the idea, as if she’d have the gall. To be one of those people who breeze in from elsewhere for a month or two and decide to make a project, you know, “with the community,” the picturesquely struggling town. The gall of it. She would never. This was different, of course, what she was doing here.

Just taking some time at home, she wrote back. Sorry so slow, not much screen time lately. She ignored the parts of messages that hinted at visiting or putting them in touch with so-and-so at an artist residency she knew nothing about on the other side of the island, she put the phone away in a drawer.

Sunday night. Trish was making Jiggs. The warm starch smell of boiled potatoes. Therese hovering and then getting banished from the stove, settling in to read the flyers and provide running commentary on whatever was on sale out to Piper’s. Ruth stretched out on the daybed reading. There was a knock at the door and Marthe went to open it and found a woman around her age, early thirties give or take, dirty blonde hair, soft denim maternity overalls that were sagging a little in the front, she was carrying a tiny baby. She had a gold cross around her neck, the thin chain caught up in one of the straps of the overalls. She tread gingerly as she stepped inside the kitchen.

I just thought I’d, I wanted to come by and thank you, she said, looking to Trish.

Come in, come in, Therese said. Let’s have a look at him.

I’ve just been in town the week to see the doctor for his four weeks and he said everything is great, he’s gaining weight, it’s all much better.

The girl looked a little wild-eyed, though. Marthe stared at the baby. He’s called Patrick, after his grandfather, the girl said, handing him to Therese, who immediately launched into furious baby talk.

Sit down, Trish said, here. She pulled out a chair from the table. I’ve got supper on, you stay now and eat something. How’s he feeding?

Oh, he’s best kind now. Rocky first week or so, like I was telling you, but we got it straightened out. Jeff’s mom’s been up, so that’s been a big help.

She suddenly looked back to Marthe and Ruth, shy.

These two are down here for the summer, Therese said.

Trish said here, sit down now, this is nearly ready.

Oh, I can’t stay, the girl said. I got Jeff out in the car waiting. He said to say thanks too, and he’ll be up the week with some turrs he had put aside for you.

Trish just nodded at this.

And I’m sorry he was a bit. You know. She hesitated. They all thought I was nuts, but I’m glad I did things how I wanted. You know? Since you were there for Mom when I was born, and now with her gone. Anyway, she said, hearty again now, I just thought I’d bring the little feller down and show him off now he’s gained a bit of weight.

Therese handed the baby back over and the girl left, calling good night, and thanks again, thanks a million.

Therese turned to Trish. You never told me you did her mother too.

Her mother was a Ryan, Trish said.

The one passed in the winter, Therese said. All right. I used to see her out to the store, my god she was some thin by the end.

Trish rounded on Marthe. We don’t go repeating anything like this, when anyone comes by, you hear, she said. She married one of Gerald’s crowd from over the way, and he’s still convinced I talked his oldest girl into something back in the day. He had young Jeff there watching me like a hawk the whole time. Bless her heart she got her way, though.

Marthe went to bed turning Trish’s words over and over.

Marthe hadn’t yet really thought about husbands waiting out in the car, or boyfriends hopped up on their own indignation, or suspicious fathers who never much liked Trish and what she got up to and what she got away with. Neighbours muttering about the goings on.

She hasn’t thought about Jane in for questioning, Jane in the newspapers, Jane getting slaughtered on the internet. Hate mail from zealots and the cold shoulder in town.

Jane losing control of their own story.

Even now Marthe thinks about the story first, she keeps sliding away from real fear, past the threat of exposure, the resulting consequences. Marthe thinks only fleetingly about charges, a trial, her words and intentions twisted by an ambitious prosecutor, Jane called out for actually thwarting the agenda by not quietly working within the system.

Marthe leaps forward to explaining herself to a sympathetic journalist. She leaps forward to surfacing on the right side of history, Jane emerging once again triumphant. She doesn’t think about the fact that Trish is old, that Therese has grandkids. She doesn’t think about the fact that the narrative will entirely depend on public opinion in the moment things are brought to light. Whether there’s a larger story that their little resistance can be part of. Whether sympathy will fall with them or not.

Marthe walked around alert and anxious for a few days and then fell back into the rhythm of their days and forgot to be worried, soothed by Trish’s sturdy presence. Jane would be too big to buckle that easily, Jane would not be so easy to pin down. Jane could never not own their own story. 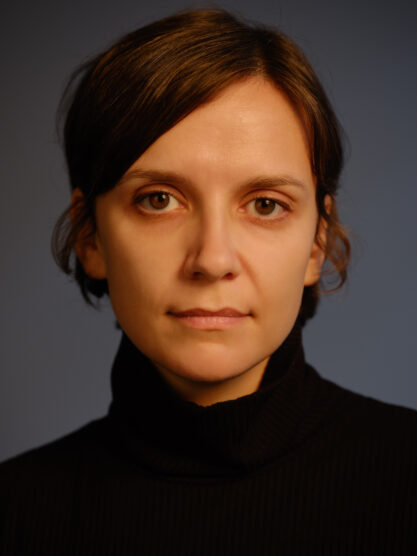 Aimee Wall, a Newfoundland native, is a writer and translator. Her essays, short fiction and criticism have appeared in numerous publications. We,Jane is her first novel.

Excerpted from We, Jane Copyright © 2021 Aimee Wall, published with permission of Book*hug Press Read an Excerpt from We, Jane by Aimee Wall