Recently, abandoned churches have had an unlikely saviour: the hotelier. Sure, it may not seem like a match made in heaven—sacred spaces serve a higher purpose, while hotels are hedonistic by design—but the typical church architecture of an open layout, vaulted ceilings, and walls of stained glass offers a distinct canvas for reinvention and a unique guest experience.

A handful of designers have recontextualized these spiritual spaces for secular indulgence. Here are just a few ancient sanctums transformed into accommodation by modern high design. 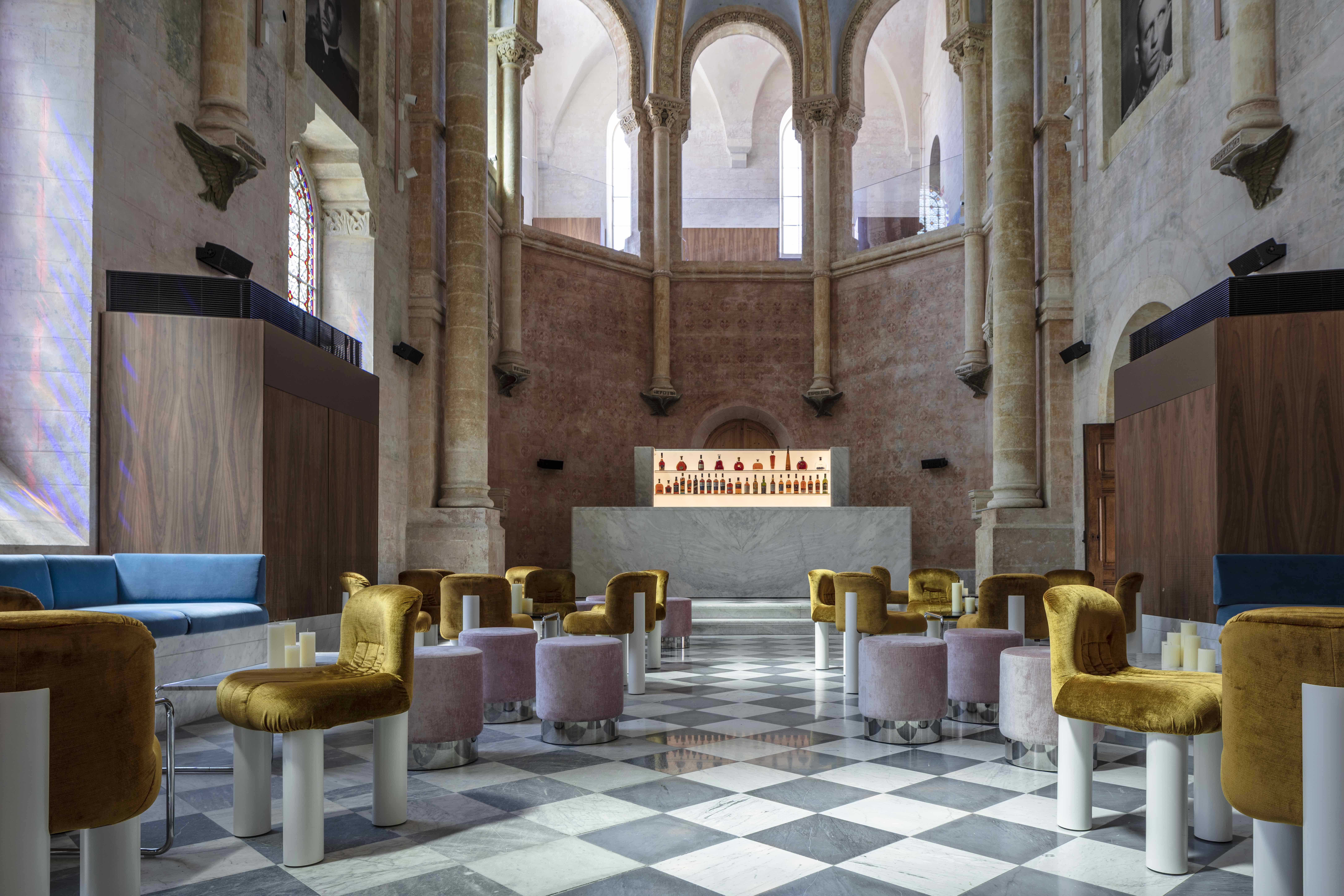 The Jaffa is a Luxury Collection Hotel.

Over a decade in the making—13 years, to be precise—the Jaffa, a Luxury Collection Hotel in Tel Aviv, opened in a 19th-century French hospital and monastery set alongside the Mediterranean Sea. Under the direction of British designer John Pawson and local architect Ramy Gill, the resulting 120-room hotel combines Roman Renaissance architecture with dashes of contemporary design. The dual architect team recalls the pair of original architects, Grebez and Ribellet, sent by Louis V of France.

The pièce de résistance, a neo-Roman-style chapel, was restored and reimagined as the hotel’s lounge. Scraping away layers of plaster, the restoration revealed patterned walls, not to mention original stained glass, checkered tiles, and stonework (some of it dating back to the 12th century). These have been left exposed to honour the structure’s age, all punctuated with Cini Boeri chairs, rendered in plush pinks and mustards to match the church’s original paintwork, in contrast to the dignified vaulted ceilings. 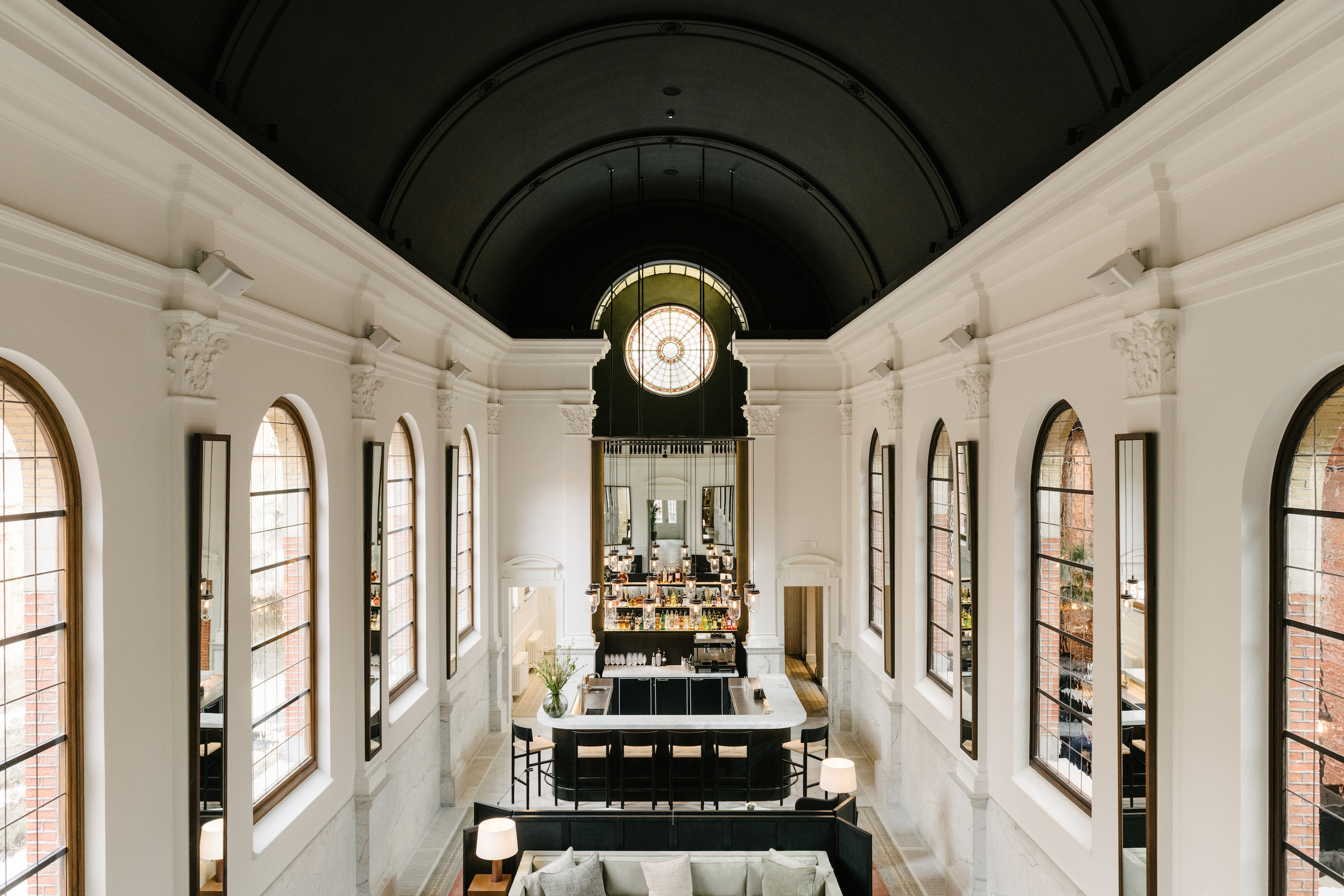 Uniting five historic buildings within a former Augustinian cloister, the aptly named August hotel is the latest opening in Antwerp’s flourishing Groen Kwartier (Green Quarter). Here, Belgian architect Vincent Van Duysen’s renovation ushered in the opening of the former enclave’s doors to the community and visitors. The convent’s former chambers, now 44 guest rooms, are a meditation on restraint. Adorned simply with handwoven Portuguese rugs and light linens, they’re complemented by views of the cloister’s manicured walled gardens, while suites have views of the site’s private chapel.

But the chapel isn’t just for looks: it serves as the hotel’s lounge. Here, the dramatic domed ceiling, repainted in jet black, deflects the gaze from the heavens towards new spirits: instead of an altar, patrons will find a well-stocked bar. 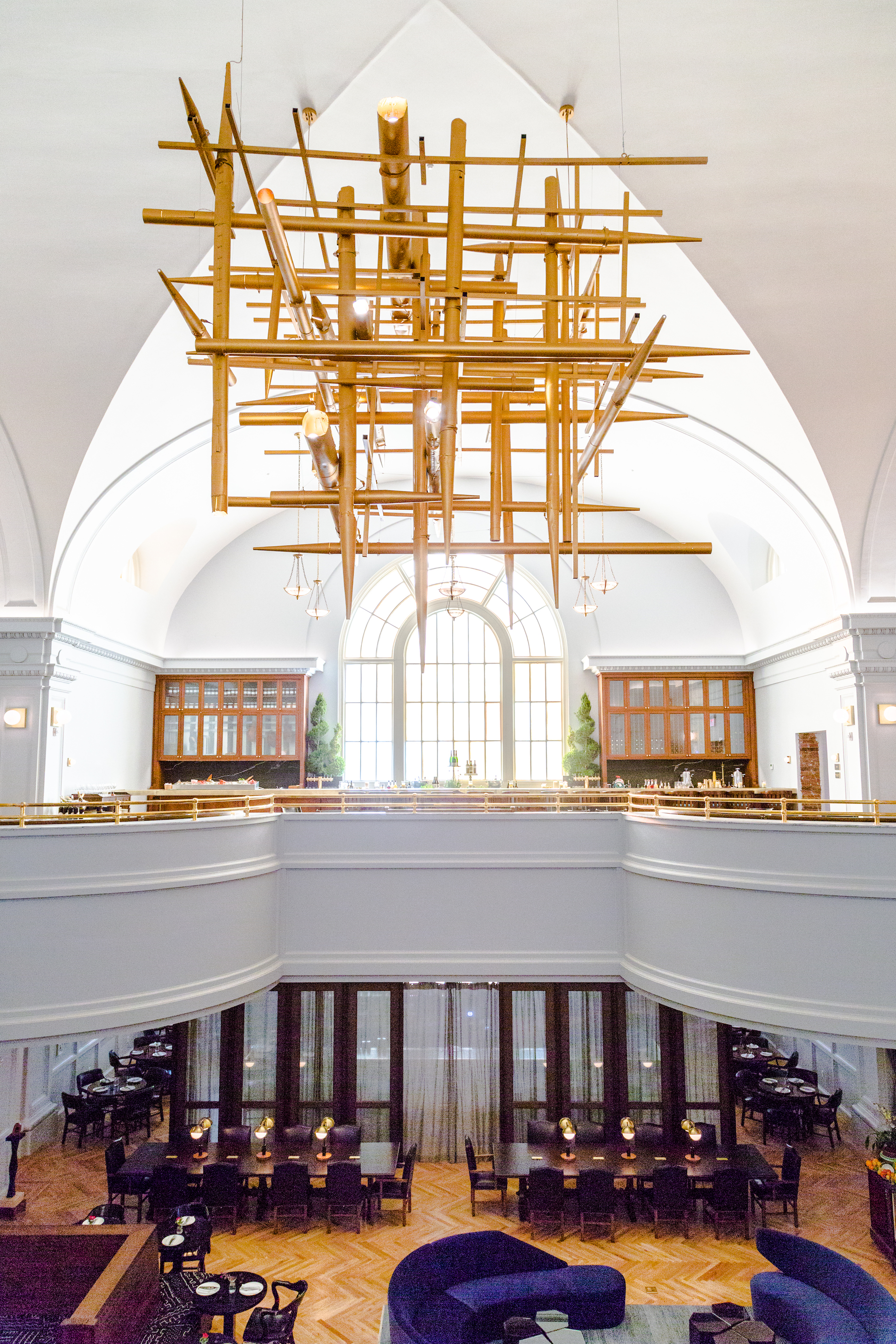 The restaurant at LINE DC; photograph by Gary Williams.

A church in Washington, D.C.’s quirky Adams Morgan neighbourhood had sat empty for nearly 25 years, but now the LINE DC is making the most of the Roman neoclassical building’s sky-high, wide-open layout.

Reminders of the building’s past life are impossible to overlook. The lobby is a vaulted room that rises 60 feet, complete with a mezzanine and unmistakably part of a former church. Leaning into the ecclesiastical character, designers crafted a chandelier from organ pipes. Deeper within, pews have been painted anew and set outside elevator doors, while hymnal boards point guests toward their rooms. More pointedly, even though women were rarely centre stage at mass, many of the hotel’s 3,000 pieces of art were made by women—amen. 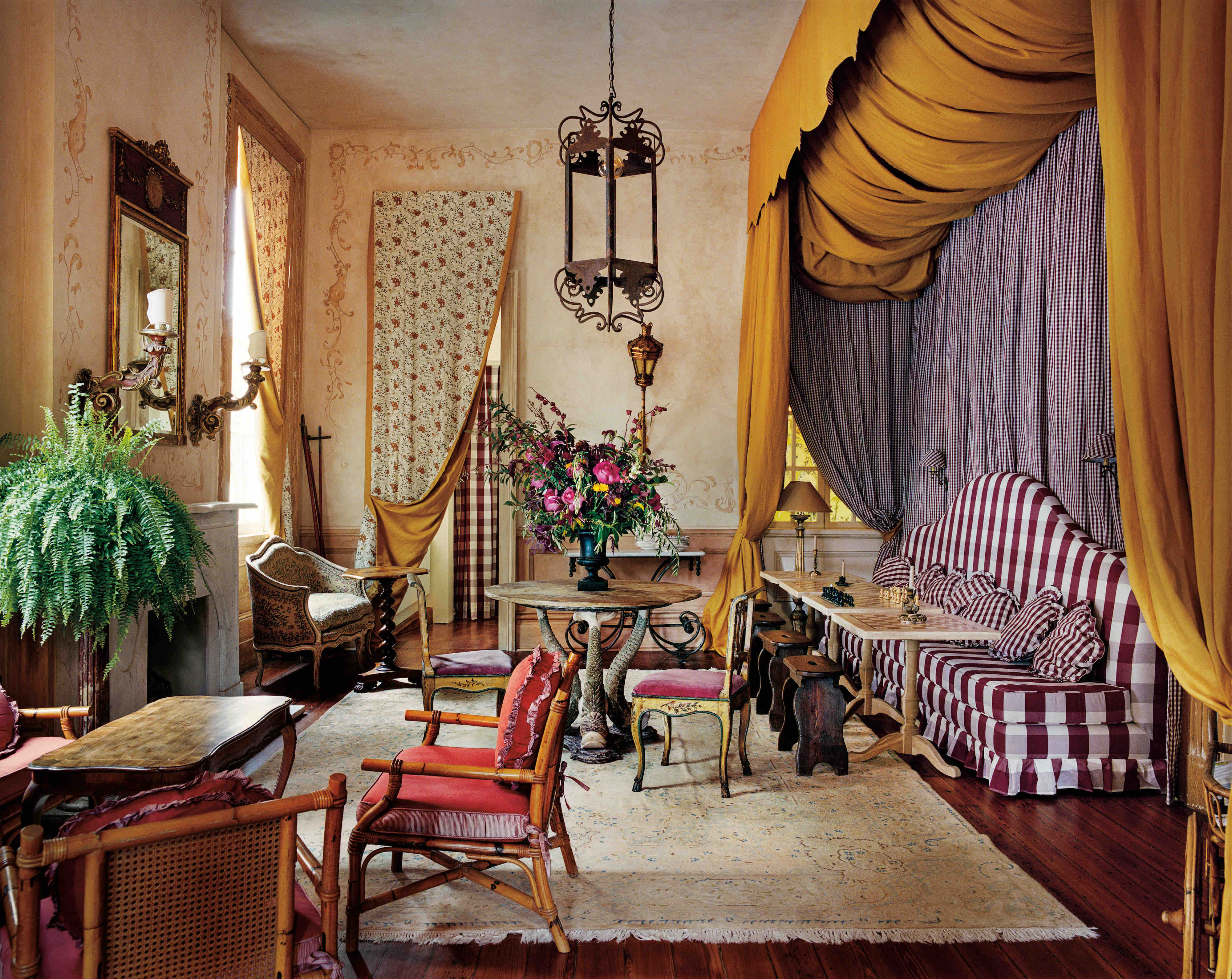 The decadent rooms of Hotel Peter & Paul; photography complements of the hotel.

Throughout the 71-room redesign, history is wrought without being overwritten: the interior palette was inspired by colours found in European and African religious paintings from the 14th through 18th centuries. The team was careful to restore as much of the site’s original architecture as possible—think stained-glass windows and wainscotted corridors embellished with hand-picked furnishings and custom-designed rugs. Reborn in all the right ways, you’ll find The Elysian Bar in the rectory, an ice cream parlour in the former convent, and a hip café in the small chapel. The courtyard, ringed by bell towers, chimes in with the site’s original soundtrack. 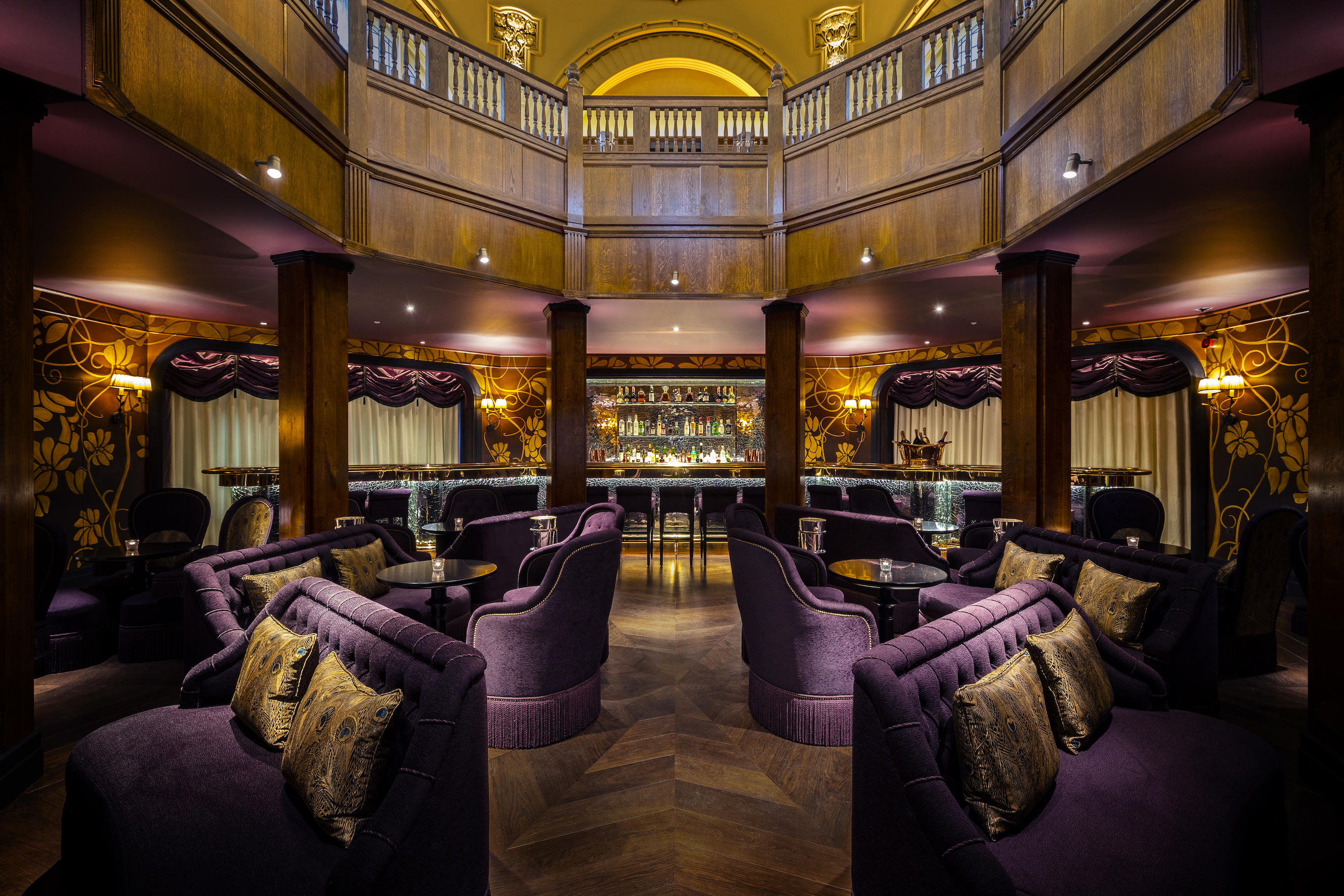 In Bloomsbury, a 110-year-old building (the Baptist Church’s former London headquarters) had sat mostly untouched since the 1960s, but under the direction of French architect Jacques Garcia, the overlooked building was transformed into a decadent 39-room affair. At what is now called L’Oscar, a nod to Oscar Wilde, modesty has been shelved for an unquestionably sumptuous experience.

Two new floors were added to the building, and its mix of original Arts and Crafts style and neo-baroque architecture is next-level lavish. Garcia’s interiors include spot wallcoverings embroidered with delicate butterflies, headboards rendered with peacock motifs, richly patterned carpets; and plenty of red, gold, and black accents. The locus, of course, is a Grade II–listed chapel, which Garcia transformed into the flamboyant Baptist Bar & Grill, helmed by Michelin-starred chef Tony Fleming. Topped off with a glass dome, the octagonal chapel is chock full of glamour, tasselled velvet furnishings, and glossy surfaces.