The small town of Panzano in Chianti sits on a hill halfway between Siena and Florence in the heart of Tuscany. It’s a town best crept into, through the arches of the ancient stone walls, which once fought off Florentine and Sienese invaders. These days, in the old town centre, the burble of a fountain echoes through a piazza, the bells of the Church of Santa Maria toll and, from behind the counter of his butcher shop, Dario Cecchini declaims to a group gathered before him, “To beef or not to beef, that is the question!”

The first time I wandered into Cecchini’s 250-year-old macelleria, Antica Macelleria Cecchini, was 13 years ago. I had come on a carnivorous pilgrimage after the American author Bill Buford had penned a hagiographic New Yorker profile of the butcher but shortly before the publication of Heat, Buford’s book. It was easy to see why Buford was besotted. Cecchini’s magnetism was already in full effect. Broad vulpine smile, crinkly eyes, spotless apron, Cecchini was prone to lapse into his fellow Tuscan Dante’s terza rima as he was to tear up describing the beauty of eating a cow snout.

I had, of course, been in butcher shops before. I had even been in Tuscan butcher shops. But nothing could possibly prepare me for Antica Macelleria Cecchini. Behind a glass case, thick slabs of porchetta, sausages like soppressata, fennel-studded salami, snowy burro di Chianti (rendered lard) in a silver bowl, and of course, thick slabs of bone-in steak, the so-called bistecca Fiorentina, which stand like Easter Island monoliths. Behind the case, standing in front of a butcher block whose wood had long since been worn down into a dip, was Cecchini. In a gesture familiar to all butchers and delimen everywhere, he bade me try a few slices of his home-made fat-studded headcheese salami. I too became besotted. This being before he opened his three restaurants―Officina della Bistecca, Soloccicia, and Dario DOC, all located in the same complex―I contented myself ordering a few kilos of the meat, swinging by a local bakery to buy some schiacciata all’olio―a Tuscan focaccia―and enjoying a rustic lunch, sitting on the marble ledge of the fountain. 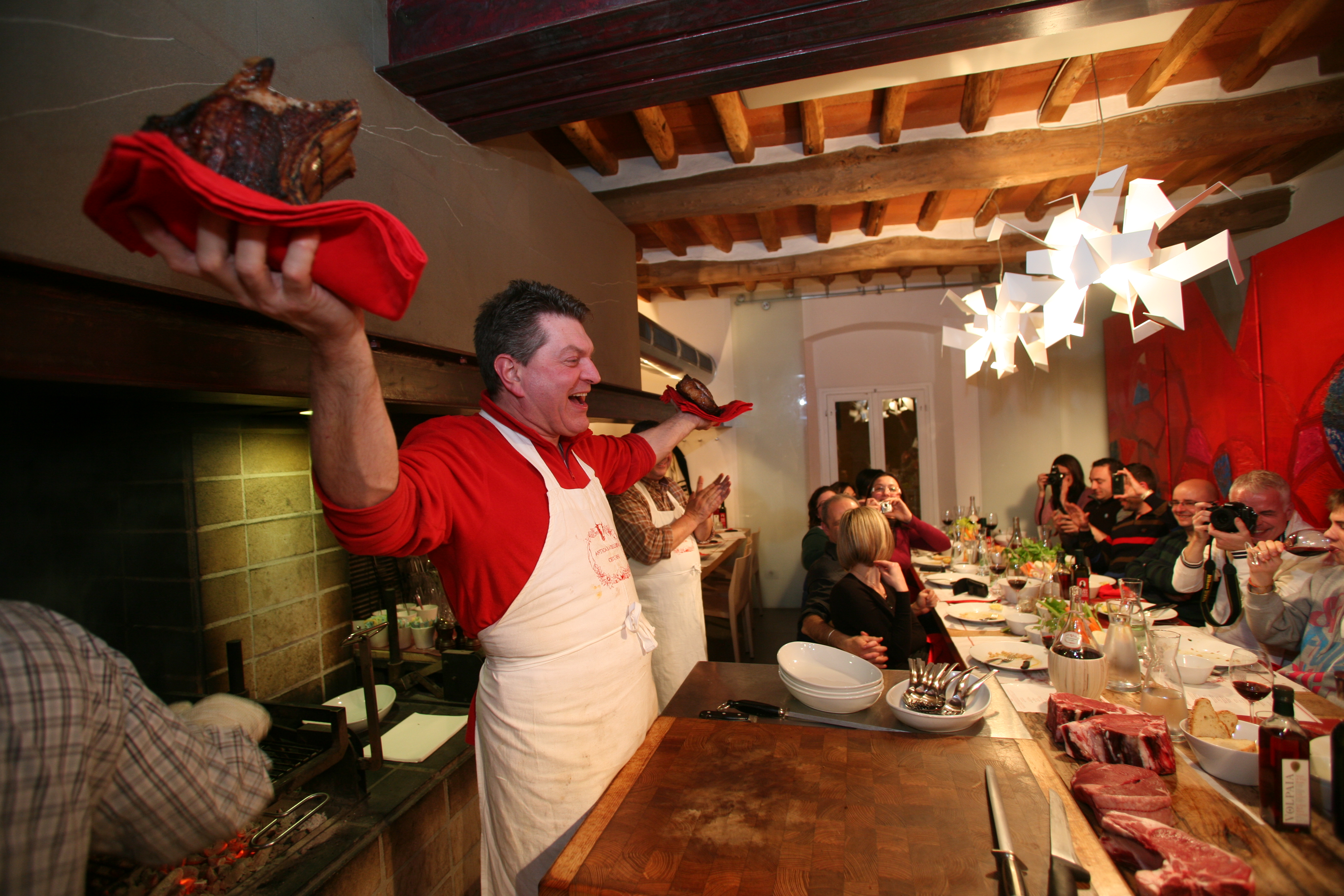 From behind the counter of his butcher shop, Dario Cecchini declaims to a group gathered before him, “To beef or not to beef, that is the question!”

In the intervening years, Cecchini’s footprint has grown. In addition to the three restaurants in town he has opened next to his butcher shop, he opened his first restaurant outside of Italy last year, a steakhouse called Carna at Nassau’s Baha Mar resort in the Bahamas. And he’s circled the globe preaching the gospel of buon carne, buon vino, buoni amici! This month, he lands in Vancouver for the first time for a collaboration dinner at Nightingale Restaurant with owner/chef David Hawksworth and head chef Phil Scarfone. For Cecchini, the trip is another opportunity for convivium. “I have nothing to sell,” he tells me. “But coming to Vancouver is a part of lifelong learning. Canada is not an area I know much of, but it’s more as well. It’s a connection and exchange of meat and of spirits.”

In Hawksworth, Cecchini has found a kindred spirit. Both men carry enormous respect for the animals that eventually land in their kitchens. “It’s extremely important to me that the animals have had a good life and had a good death,” explains Hawksworth, “that’s why we work with small farms who really care for their cattle.” For this dinner, for instance, Hawksworth purchased a half-a-cow from Cache Creek Ranch, a family owned ranch of 250,000 acres nestled in the Gold Country of British Columbia. That’s a world away from Chianti but the meat is organic, ethically raised and hormone- and antibiotic-free. As Cecchini explains, these animals are connected to him in the same way his beloved Tuscan cattle are. But he’s eager to learn, to expand his knowledge and to carefully attend to the spirit of the animals. “Tradition is always continuous change,” he says. “As I journey through the course of my life, I bring all of my experience back to the butcher block.”

While Hawksworth is “supplying the kitchen and the meat,” Cecchini’s approach for the one-night-only dinner at Nightingale will be of conviviality. As he does at his restaurants in Panzano, the family-style dishes will be classics from his kitchen in Tuscany, with accompanying wines from Castello di Albola. Hawksworth, Scarfone, and Cecchini, regarded as the world’s best butcher make for the holy trinity come April 15. The Apartment at Holt Renfrew, Vancouver