As an unexpected fall snow blows outside, but within the newest restaurant on King Street West: Lapinou Bistro, there is a cozy candlelit glow, forest green velvet banquettes, and warm welcomes. This is downtown Toronto, but step into the brick-and-beam historic building with its sleek, central bar, black industrial-looking exposed pipes, and sky-high windows—and you’d swear you were in London or Paris.

This self-styled “neo-bistro” strives to do what its Parisian counterparts do so well: bend the rules a bit while retaining the essence or charm that casual French restaurants are known for.

Lapinou is doing exactly that in a variety of ways. For starters, there’s an impressive champagne program that sommelier Lauren Hall calls “an everyday indulgence”. She prefers terroir-driven bottles that cover a wide spectrum of growers and styles, and offer a true sense of place in every sip.

At the kidney-shaped, green-veined marble bar, Hall pours our group a glass of Bernard Gaucher Prestige Brut 2008, a pinot noir and chardonnay champagne from the fabled region. With a brioche or sourdough nose, this vintage beauty spends 10 years in the bottle before releasing its red-berry fruit nuances. 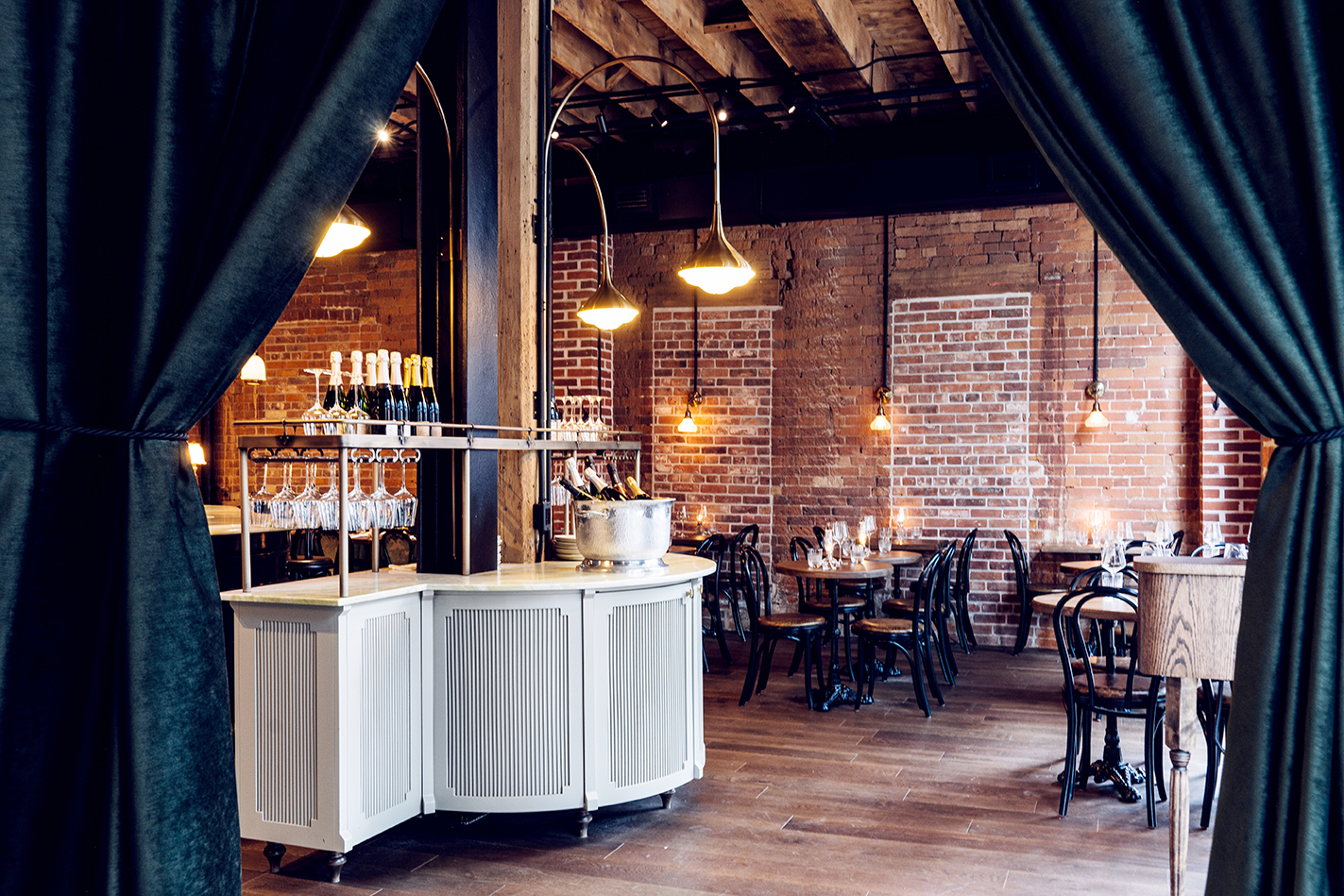 This self-styled “neo-bistro” strives to do what its Parisian counterparts do so well: bend the rules a bit while retaining the essence or charm that casual French restaurants are known for.

Director of operations Niall McCotter (formerly of CAVA, Chabrol, and Avalon) explains that the philosophy behind Lapinou is to provide balance: particular but not fussy, sophisticated yet relaxed. They’ve achieved that with the service, as well as food that’s made in-house (don’t miss the rye sourdough with cultured butter and birch syrup): technically sharp, locally sourced, and not too precious.

The beef with smoked potato, onion, and beef jus, for example, is the “sleeper hit” of the night, considering our group was planning on skipping it for other options. We’re glad we tried this alternative to traditional steak frites, the smoky potato purée playing off the grilled meat, sweet onions, and jus. The gnocchi with artichokes, chanterelles, hazelnuts, and vin jaune tastes like crisp-on-the-outside, pillowy bites of cheese fondue—worth every indulgent bite!

Most of what you’ll find on the Lapinou menu is based on French bistro fare with flourishes from head chef Jamie Ullrich (Michelin-starred Pollen Street Social in the U.K.; NOMAD in Sydney; Nota Bene, Estia, Byblos North, and NAO in Toronto).

“Chef Jamie pays homage to classic dishes, techniques, and regions, but with a wink,” explains McCotter. “It’s familiar, but with a breath of fresh air.” That’s a perfect description for the apple terrine dessert—think deconstructed tarte Tatin, but taken to a new level with Ullrich’s vinegar caramel and brioche ice cream.

The charm is also in the way Hall treats diners and offers wine—polished service with a non-stuffy approach that will suit anyone looking for a simple cinq à sept, or a fuller dining experience that from start to finish will feel like you’ve been transported to somewhere special. 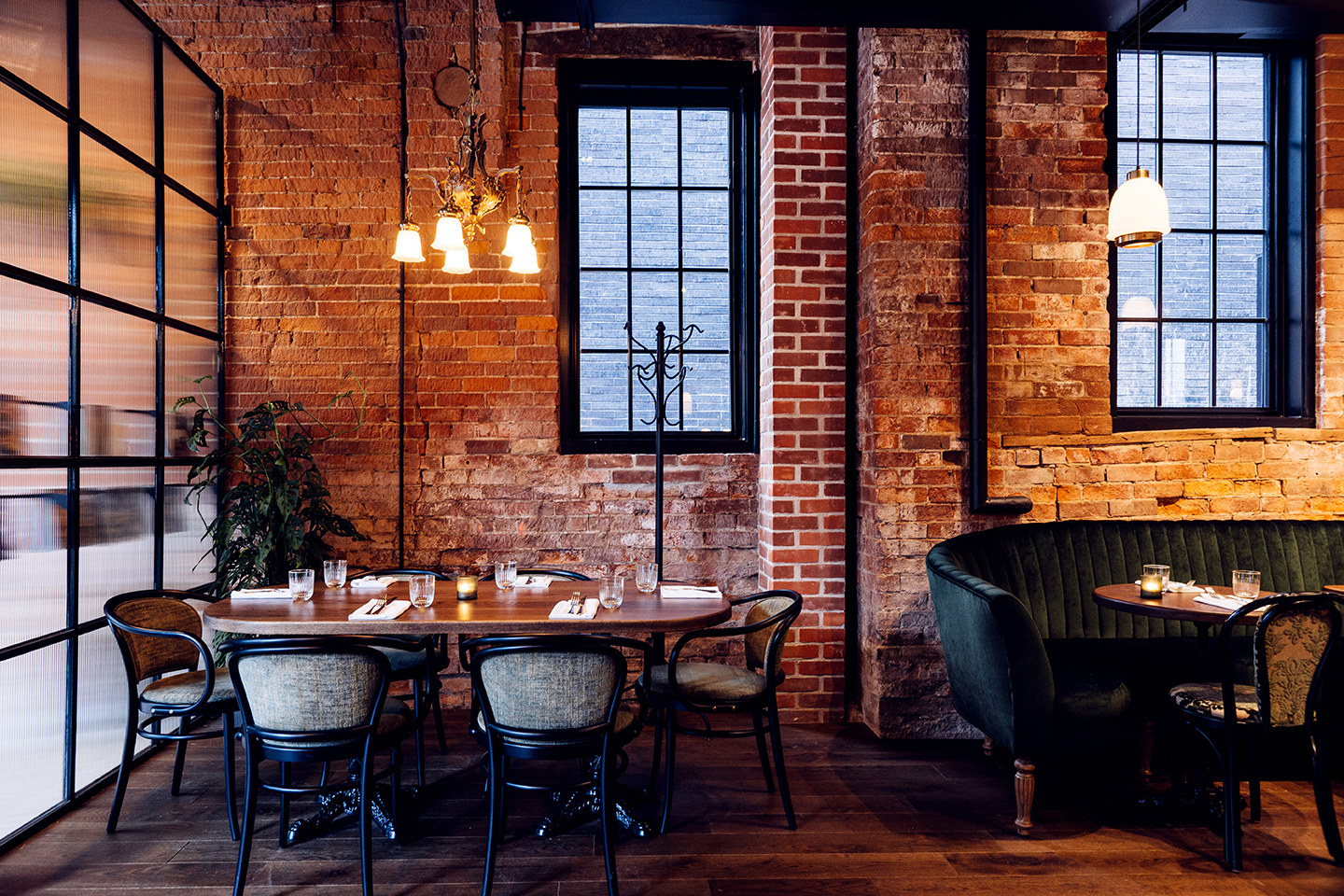 Most of what you’ll find on the Lapinou menu is based on French bistro fare with flourishes from head chef Jamie Ullrich. The Secret Art of Theodore Geisel

Muji on the Mind