This isn’t Harji’s first rodeo; he’s been wooing the city with eateries overseen by his restaurant group, Iconink, since 2011. Currently, Byblos does swishy Eastern Mediterranean fare, Estia is influenced by Greece and Turkey, and Mira adeptly handles Peruvian eats. Shook Kitchen is Harji’s dive into the Middle East, with Israeli cuisine viewed through a strictly vegetarian lens. The moniker comes not from the concept of shaking things up, but rather from the shuk—an open-air style of market found in Israel. 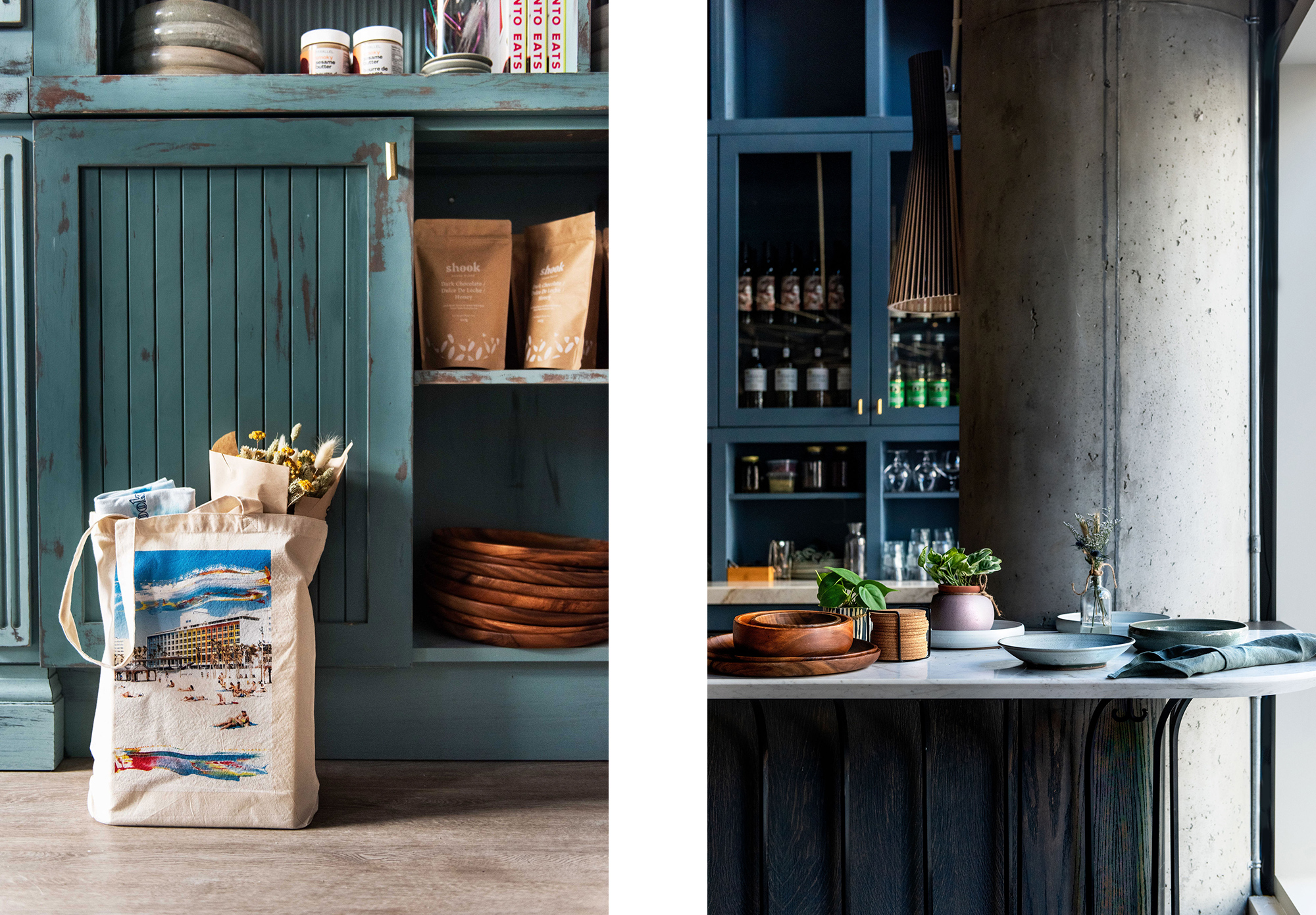 Found at the intersection of King Street West and Portland Street, the relatively compact space tucks 78 seats into 2,600 square feet. Outside, a patio seats an extra 42, providing excellent people watching for the modern flaneur. Upon entry, diners encounter a well-curated boutique: handsome potted plants share space with cookbooks, custom Desert Rose Sloane tea, and sustainably tie-dyed shirts made using food scraps. Beyond the shopping zone, design outfit Model Ctzn has managed to create an intimate space beneath a yawning ceiling. A custom-made wicker light fixture feels like a chandelier take on a Louise Bourgeois spider, while a sweeping art installation brings tilework to mind, reaching from one end of the room to the other.

However, the most noteworthy design feature is the open-concept kitchen. Fire is the focus here; flame-licked food emerges from the wood-burning stove and charcoal grill, with nary a gas-powered appliance to be found. Executive chef Ben Heaton leads the food program, having already cemented his presence in the T.O. scene at other restaurants in the Iconink portfolio. Heaton’s goal with open-flame cooking is to tease out flavours in an unexpected manner, allowing them to shine.

Swirling together the familiar and the lesser known, the family-style menu looks to Israel for inspiration. While dishes like hummus and shakshouka may be familiar to the Toronto diner, others are a quick lesson in Middle Eastern fare. Mushroom kibbeh is a savoury sphere that’s bursting with soft labneh cheese, pickled mushrooms, and heady truffle honey. Pita—built with Ontario Red Fife flour and spiced with za’atar—is a cornerstone of the menu, accenting anything and everything on the menu. Scoop up zaalouk dip (burnt tomato matched with caramelized shallot and eggplant) with the tasty rounds. Hummus is another linchpin; Shook’s gossamer iteration comes gussied up with crisp chickpeas, sumac red onions, and pickled chili for some heat. 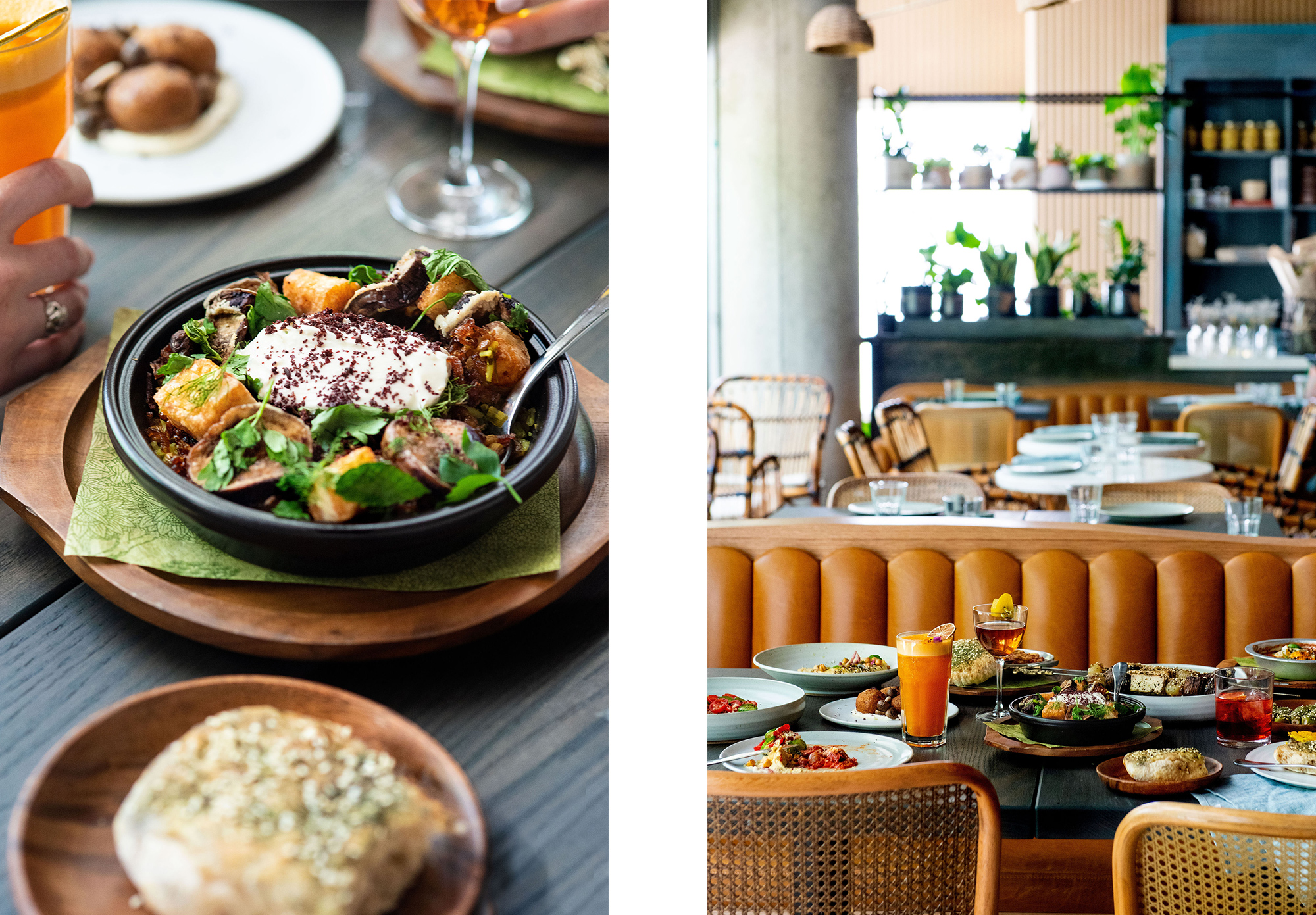 Shook’s vegetarian menu is a brightly coloured display of deliciousness.

Mains include the stunning tah dig, an admittedly Persian offering. A sunny yellow mound of turmeric rice hides wild mushrooms and creamed kale beneath its crispy shell, dressed with edible flowers. The green shakshouka is a comforting stew whirling together green tomatoes, green chili, and green zhug, a Yemeni hot sauce. Two poached eggs and toum—a garlicky sauce—are tucked into the dish; stir the contents thoroughly and dig in with that pita. (The carb-averse had best avert their eyes.) For dessert, try the rose and cardamom pastilla: whisper-thin rounds of phyllo pastry hug cardamom- and rose-flavoured whipped cream finished with strawberries. Drinks are all the colours of the rainbow; the violet-hued Par Par 75 tipple gets its colour from butterfly pea, its strength from gin, and its bubbles from Prosecco. Meanwhile, a zero-percent Carmel libation uses rose-flavoured Turkish delight as a starting point, marrying lychee with rosewater, pomegranate, and lemon to brighten the drink.

For restaurateur Harji, this foray into vegetarian fare is as elegant as it is comforting.

Photos by Benson and Oak for Shook. Spa My Blend by Clarins at Ritz-Carlton, Toronto