One of the most recent milestones in scientific history, that of the first photograph of a black hole, speaks to the certain relationship between photography and science. Space photography, in particular, has an ability to humble viewers by providing glimpses into the outer universe affecting them as poetically and existentially as art.

One such image, Pillars of Creation, of cosmic dust and gas formations in the centre of M16, a cluster of stars better known as the Eagle Nebula some 7000 light years away from Earth, was taken by NASA’s Hubble telescope in 1995 and re-touched in 2015. Considered Hubble’s most detailed image thus far, Pillars’ stark beauty and vivid intricacies spark wild imaginations—the towers of gas resemble stardust wolves prowling into the heavens—and yet the photograph is rooted in a scientific actuality. 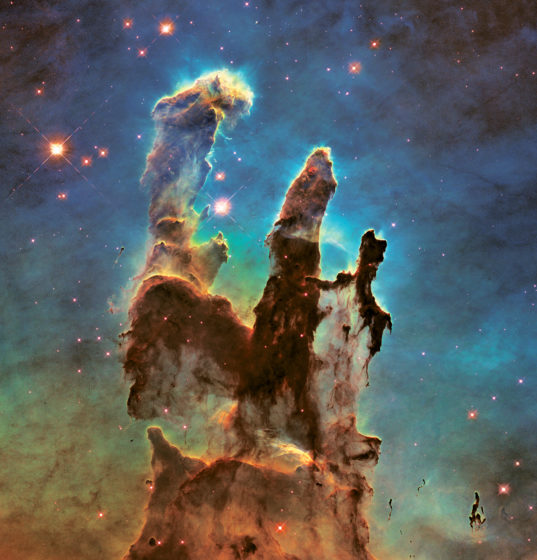 Pillars of Creation appears in Marvin Heiferman’s upcoming book, Seeing Science: How Photography Reveals the Universe, that delves into the artistic sensibility of science and the role of photography in creating knowledge out of the vast unknown. Through the scope of 300 photographs and 60 short essays, Heiferman, an American-based curator and writer of photography, “reveals what lies beyond the parameters of sight, imagination, and human control.”

In 1968, the Apollo 8 mission marked the first manned spacecraft to complete a lunar orbit, and with this, the first human-captured image of Earth from the vantage of the moon (the photo was taken by astronaut William Anders). Apart from being one of the most iconic images in scientific history, the photograph, called Earthrise, puts into perspective the isolation of Earth. The image, as depicted in Seeing Science, shows a lonely-looking Earth from the eyeline of the moon, encompassed in pure blackness.

Heiferman goes beyond the discipline in Seeing Science, including the work of London-based photographer James Ball. Ball, who goes by the pseudonym Docubyte, converges pastel backgrounds and vintage computer models in his ongoing series Guide to Computing which relives the glory days of the now-laughably large computers. The photographs display the machines nostalgically, as they were in their prime: the pioneers of a new era and the forerunners of connectivity.

Seeing Science: How Photography Reveals the Universe releases on May 29 by Aperture publishing, and can be pre-ordered here.

How to See Science

A New Exhibition in San Francisco Is Out of This World

Perfect Strangers: A New Photography Book Documents the Life Before the Pandemic