The big top can hold 2,500 people, but right now it’s empty, save for the performer on stage and a handful of technicians buzzing around him. He stands on an antique buoy salvaged from the ocean as stage managers hand him canes, up and up and up. He’s not in costume, but as he gets higher and higher, he flirts with the empty arena as if he were. It’s the afternoon before opening night in a new city, and the performers haven’t been on stage in 10 days. There is a chaotic energy as they practise their routines, and set-dressers, costumers, and gofers flit from tent to tent.

Cirque du Soleil travels with everything: 67 trucks with 125 people from 25 nations, 4 chefs, 46 performers, and 2 coaches. It takes eight days to set up the space, and two-and-a-half days to tear it all down before travelling to the next city. Such is the life of a circus.

The artists’ tent, which adjoins the big top, is the only consistency on the road. It is the only tent that is set up exactly the same way in every city their visit and acts as their home. Here, the performers work out with free weights, practise their routines, and generally mess around (of course, to a non-performer, that looks just as impressive as a choreographed routine). Some elect to enjoy the calm before the storm by lying on couches with their hoods up, staring intently at their phones. You’d never know to look at them that they can contort themselves as if they didn’t have bones. Here, the laws of gravity are a suggestion. Once the makeup (which they do themselves) and costuming are on, they are birds in flight, or snakes, or mustachioed actors showing off for the ladies. 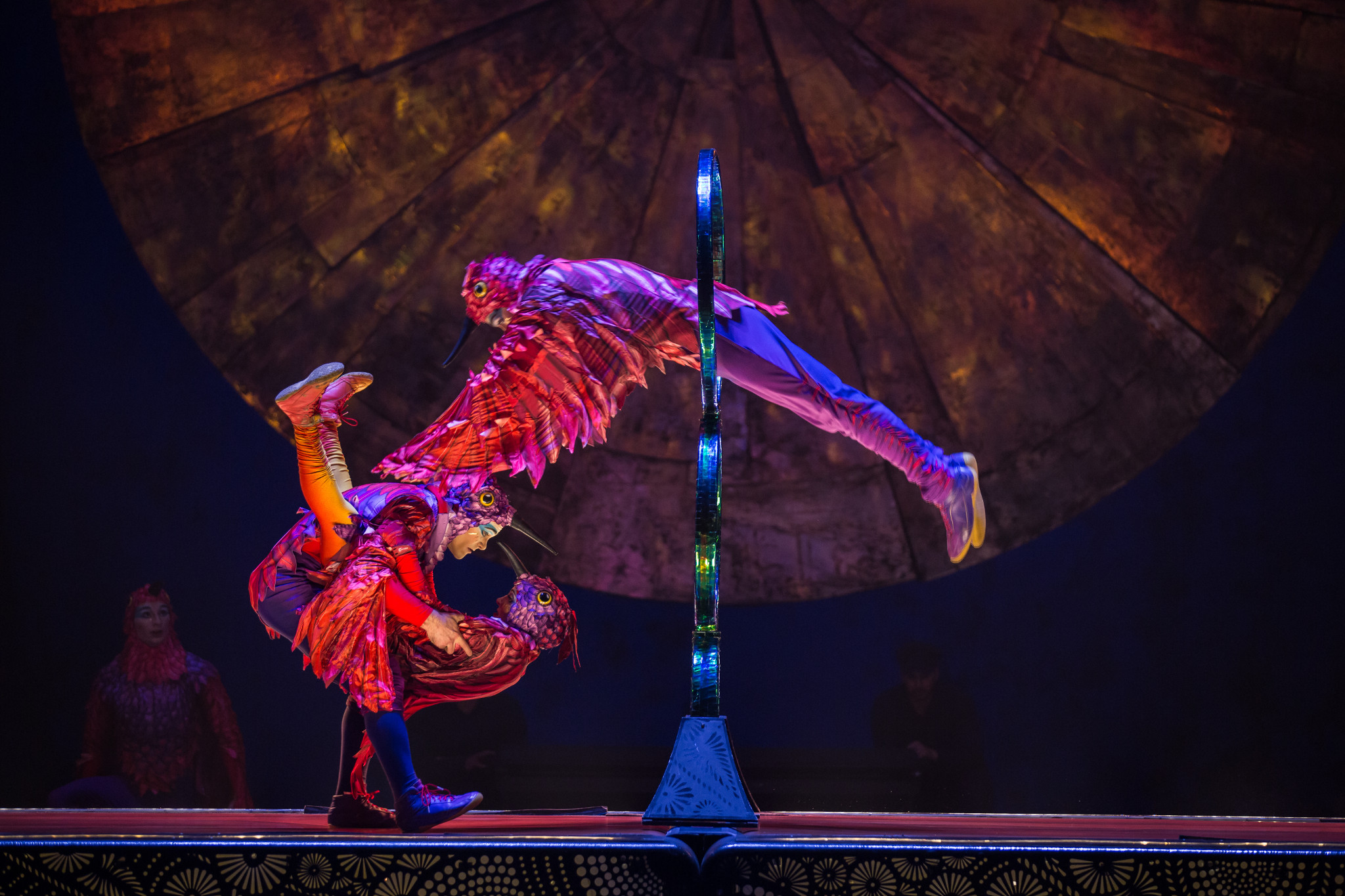 A group of humming birds soar through hoops stacked on top of each other, all the while running along two giant revolving treadmills. 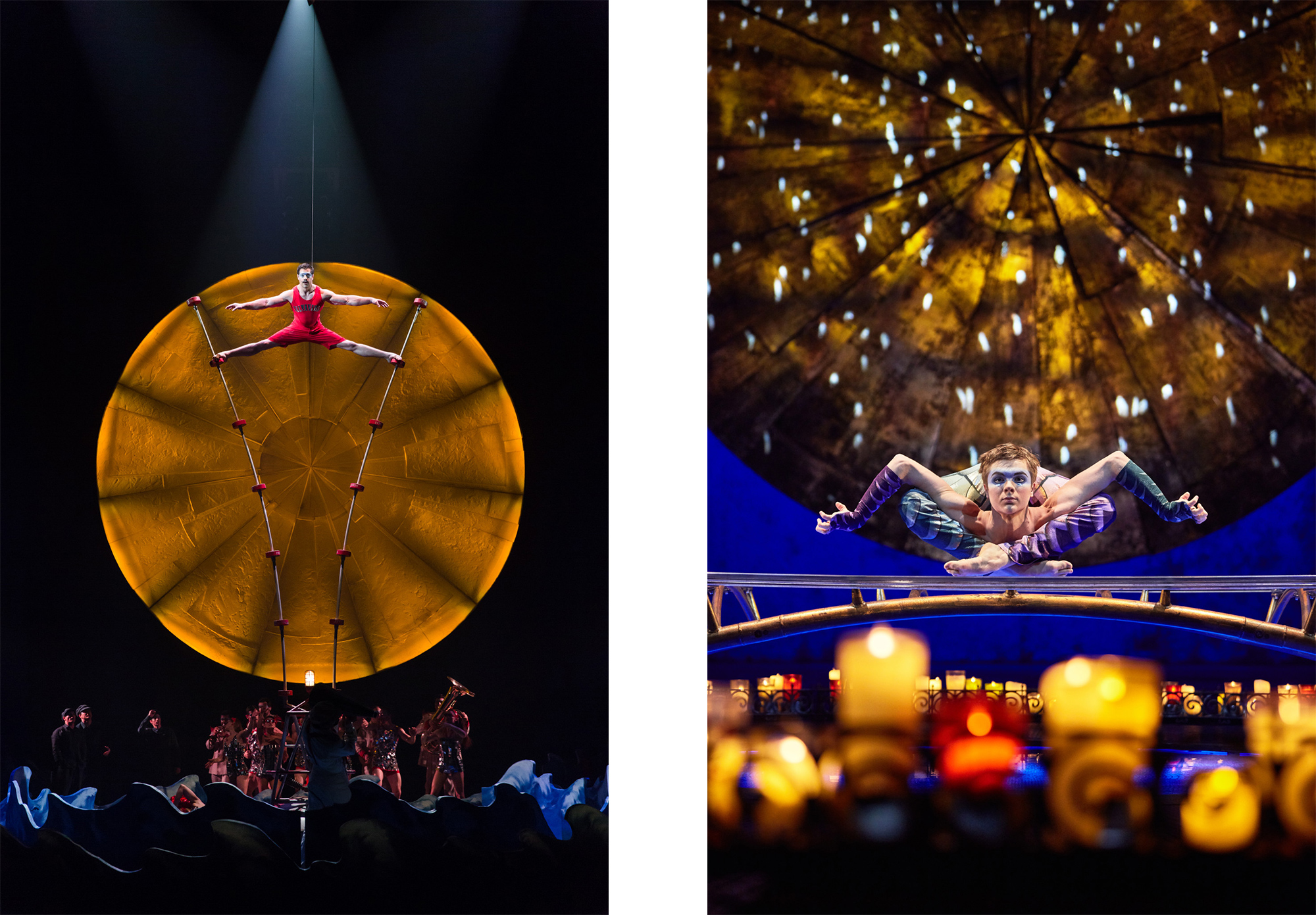 Left: Sasha’s character is based on a Mexican movie star from the 1920s. He performs a classic hand-balancing act on top of two towers of flexible canes on top of  a bouy. Right: A contortionist emulates a snake in costume and appearance, bending himself in half and half again.

When the performer on the buoy is finished his rehearsal, the canes are stacked 20-feet high. He returns to the ground, and it is time for the next act to take the stage. His name is Sasha, and he is a lifer. He’s been a performance gymnast since he was a child in East Germany, before he relocated to Los Angeles at age 15 to take a circus school program in high school and college. Now, at 25, nothing about Cirque can surprise him. When this is your normal, the things you find challenging go beyond the physical or technical. He points out, “Cane stacking is traditional; it is something that has been around for a very long time. Yet because [the act] takes a big apparatus that is hard to travel with, as a freelance performer, you wouldn’t necessarily choose that as your act to travel with, so adapting to the new apparatus, the height, and adapting to the specialty of the apparatus was a big challenge.” Moreover, it’s the acting that can prove the most exhausting night after night, he says. “At the same time, there is a lot of flirting with the audience and comedy… It’s fun and it’s really great to do this, but if you do this 10 times a week it’s not enough just to be happy on stage. You have to be overly happy all the time.” Some days that comes easily to Sasha, and other days (around show number 9 or 10) it’s harder to reach that peak of joyfulness on stage. “Of course, that’s the interesting part about it, because acting is such a huge part of our profession,” he says.

The performers act out a surreal impressionist performance through traditional and contemporary circus techniques. Every prop and set piece they interact with holds a meaning designed to capture the audience’s imagination and tell a story. It is the responsibility of Sasha and his fellow performers to create a “waking dream” that is, in a word: enchanting.

Luzia by Cirque du Soleil is on in Vancouver until December 29th.

How to Build a Cirque: Behind The Scenes of Enchantment