I can’t pinpoint the exact moment, but in recent times pizza has gone from being something to eat to religion; the pizzeria the new church, the pizzaiolo—pizza chef—the new priest, and long live Holy Mother Yeast.

Many places in the world are characterized by what its inhabitants eat. Every country, every region, every city has its own typical dish, something that says to others “we are like this.” There are dishes and recipes that enter so deeply into the culture and customs of a people that they become a symbol. In the case of Italy, pizza has conquered the palate and heart of the world.

Pizza, as we know it today, emerged in the 19th century. According to tradition, on the occasion of a trip to Naples by Queen Margherita of Savoy, in 1889, the pizzaiolo Raffaele Esposito invented pizza Margherita, with the three colours of the Italian flag: green (basil), white (mozzarella), and red (tomato). (Pizzeria Brandi, the birthplace, is still in existence.) The charm of the Neapolitan pizza is undeniable; it is, without a doubt, the one that resides in the collective imagination, whose image flashes in our mind as soon as we hear the word pizza, and that many people attempt to reproduce at home.

A genuine Neapolitan pizza dough consists of wheat flour (type 0 or 00, or mixture of the two), yeast, sea salt, and water (recipe to follow). The dough must be kneaded by hand or with a low-speed mixer. After the rising process, the dough should be formed by hand, without the help of a rolling pin, and is to be no more than three millimetres thick. And while Neapolitan pizza is the most coveted, it is also impossible to make without the proper equipment, essentially a purpose-built brick oven that will reach a heat of 380 to 485°C, for a cooking time between 60 and 90 seconds. No other device, even if it reaches high temperatures, can act as a substitute. 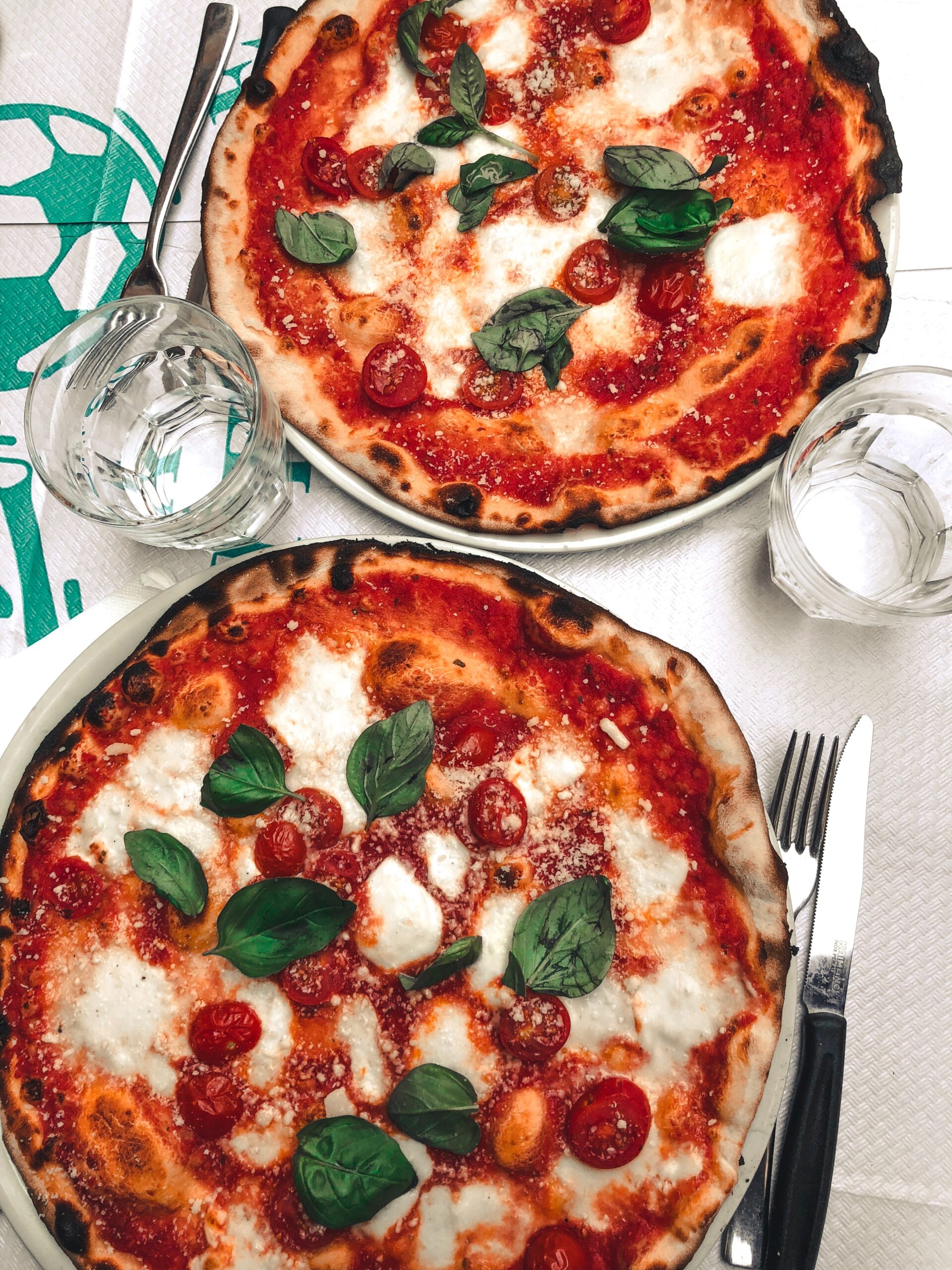 How to make Neapolitan pizza in a purpose-built pizza oven at home:

450 grams of flour (ideally 00, but type 0 is also fine)
300 ml of water
3 grams of brewer’s yeast
9 grams of salt
Tomato sauce
Toppings of your choosing

In a large bowl, dissolve the yeast in the cold tap water, and then mix in about 2/3 of the flour with a large spoon until a creamy consistency is formed.

Mix in the salt, and then the remaining flour a little bit at a time.

Continue to mix until all the flour has been absorbed. Knead energetically with your hands by folding the dough and pushing it inward. When the dough is smooth and no longer has lumps, let it rest for 20 minutes.

Dust the dough with flour, place it on a table, and then give it a few folds, forming it into a spherical shape until it’s firm and elastic. Divide the dough into 4 or 5 rounds of the same weight. Cover and let rise for 24 hours.

When ready to cook, press the dough round with your fingertips until the classic flat-and-round pizza shape is formed. Add tomato sauce and spread in spiral movements; cover with toppings as desired.

Neapolitan pizza has received UNESCO recognition as a cultural heritage item. And while its production is protected by a specification, Roman pizza is widespread and the go-to homemade pizza. The Roman pizza is defined by a thin dough that grows little during cooking.

How to make Roman pizza:
450 grams of flour (ideally 00, but type 0 is also fine)
230 ml of water
1 gram of brewer’s yeast
20 grams of salt
Tomato sauce
Olive oil
Toppings of your choosing

After dissolving the yeast in water, add salt and half the flour, and begin to knead slowly until the flour is absorbed.

Add the remaining flour and continue to knead more vigorously, using your fists until a compact dough has been obtained. Fold it on itself and cover for 15 minutes.

Knead the dough for another 5 minutes and then let it rest covered for one hour.

After the hour, divide the dough into 4, form even-weighted balls, and let them rise for 24 hours.

When ready to cook, preheat the oven to 475° F. Pick up the balls, sprinkle each with flour, and roll out to desired-size discs.

Season with tomato sauce and olive oil, followed by toppings of your choosing; cook the pizza for roughly 5 minutes, until the edges are slightly scorched.

As with any pastime, pizza-making involves a bit of trial and error. Getting the dough just right will take many attempts. Mistakes and all, the process is all part of the fun.