There’s a certain kind of minimalism that Swedish brands do better than anyone: less whimsical or avant-garde than Japan; more fun than Germany. It’s clean, iterative design, where the goal is to strip out all that’s extraneous, leaving only the elements that are useful or beautiful. Think of brands like COS, Acne, or even IKEA. Now, that approach has come to beauty, with Verso, established by Lars Fredriksson in Stockholm six years ago and now available in-store at Holt Renfrew’s Vancouver and Bloor locations or online.

“We are in a constant process of trying to simplify things, whether that’s the number of ingredients in our products or the number of products in a regimen,” says Fredriksson, who comes from a marketing background. “Generally, if you look at how we [Scandinavians] use skin care, it is the complete opposite to the Korean approach. The many step programs are sometimes just marketing—Swedish people will not do 15 steps. I don’t think there’s one single Swedish person who would. I see that other philosophies are about ritual and me-time, but for us it’s, ‘Give me a product that works. This works. Good.’”

The Verso range currently consists of 16 products including basics like cleanser, serum, and moisturizer, and add-ons such as masks and hand serum. Most include Retinol8, a form of the vitamin A derivative that’s supposed to be gentler on the skin than other types, but just as effective. There’s also foodie it-ingredient turmeric derivative, which is used for its anti-inflammatory properties, and the brand omits ingredients like parabens, dyes, and mineral oils. 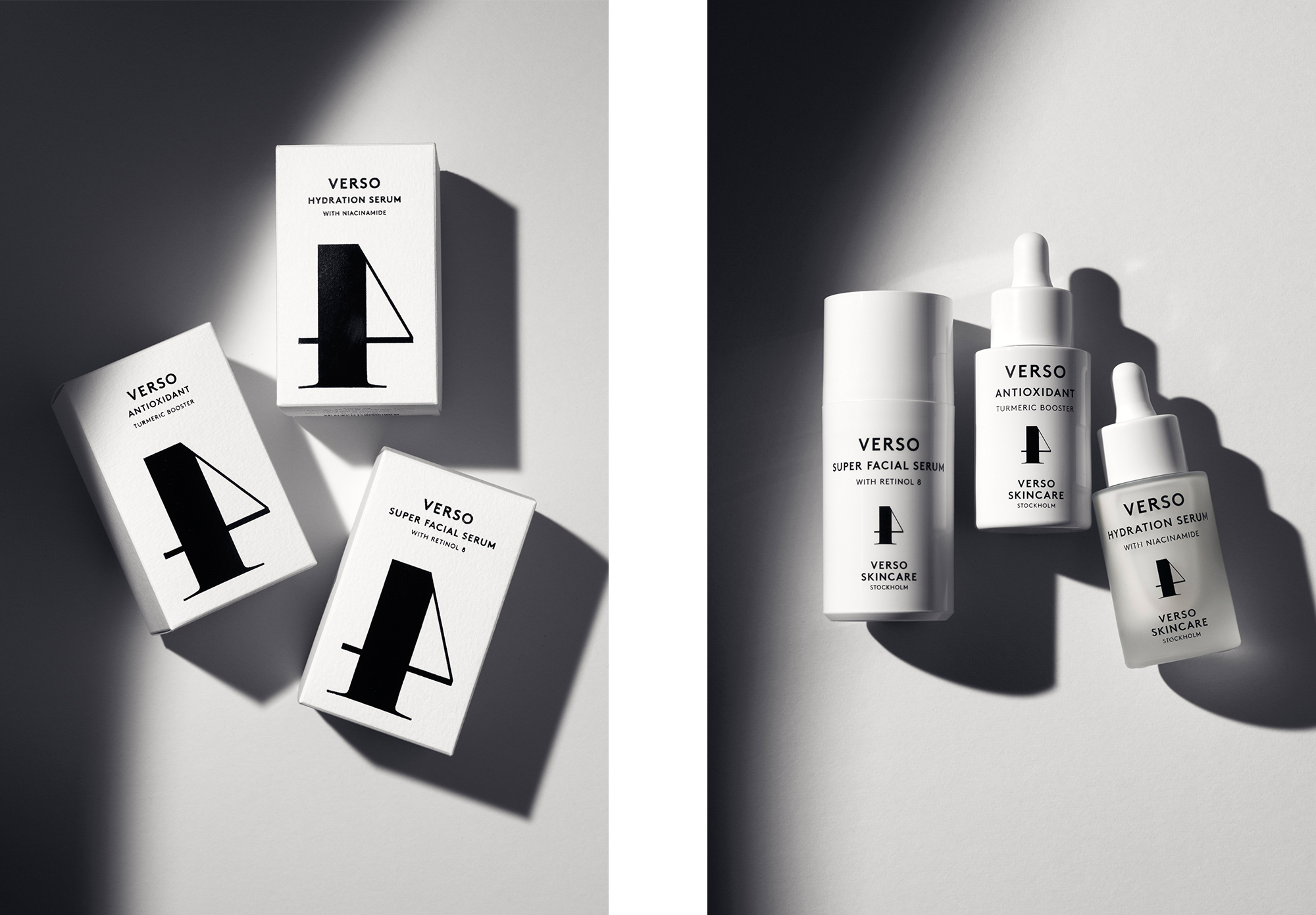 No. 4 ‘Boost’ range, including a facial and hydration serum and antioxidant turmeric booster.

With Swedish pragmatism, Fredriksson doesn’t expect you to use his full range. “I always stress that each one of the Verso products has been established as a standalone and works perfectly well with anything else in this building,” he says, gesturing to the 16,000 square-foot beauty hall at Holt Renfrew Vancouver. “We always talk about this as a smorgasbord. Everyone should use one vitamin A product a day … For those who haven’t started or aren’t happy with the one they currently use, this could be an alternative because it can be used by anyone, even the most sensitive skin.”

Verso’s recommended regimen is simple: just cleanse, serum, moisturize. “Any skin care is not a quick fix, but we know that vitamin A works over time—even the most pessimistic dermatologist who is sceptical about all topical skin care will admit that. But most clinicals show it takes at least eight to 12 weeks to see results, and the best results kick in after six months. Anyone looking for instant gratification needs to go to the aesthetic office or the makeup department,” Fredriksson says.

The beauty industry is at an interesting crossroads. The body positivity movement is teaching us to accept our lines and wrinkles, while aesthetic procedures are becoming ever more commonplace and accessible. What’s Verso’s stance on that? Previously, Fredriksson was involved in creating the first skin-care range for filler brand Restylane, so he’s familiar with that world, and he says his products can easily be used alongside aesthetic treatments.

But from his own point of view, even though Verso is named after the Latin word for reverse, “Verso is not about making you look 25. You’re not going to see before-and-after pictures or graphs and we won’t talk about reducing wrinkles by a certain percentage and so on,” Fredriksson explains. “For us, the thing is that we have products that work and are great for skin. In the end it doesn’t matter how much skin care or how many invasive treatments you use. There are certain things that you just have to accept because you’re getting older and that’s OK—it’s beautiful.”

Skin Care Just For Him

The Benefits of Facial Massage

Get to Know Verso