Like many people, Frank Lloyd Wright saw the desert as a sacred place, making it the ideal location for Taliesin West, his bold and sprawling winter home and school tucked away in succulent-dotted northeast Scottsdale. The architectural utopia is an ode to the Wrightian belief that buildings should honour and enhance the natural beauty surrounding them.

Wright’s reputation as an architectural genius (and incessant self-promoter) precedes him. The prolific creator designed 1,114 architectural works in his 91 years, and of the one-half that were fully realized, many have been deemed iconic: his Usonian houses, single-level homes designed with the middle-class American in mind; Fallingwater in Pennsylvania, one of his most beloved private residences; and Taliesin, his summer home in Wisconsin. At Taliesin West, a different side of Frank Lloyd Wright is revealed. 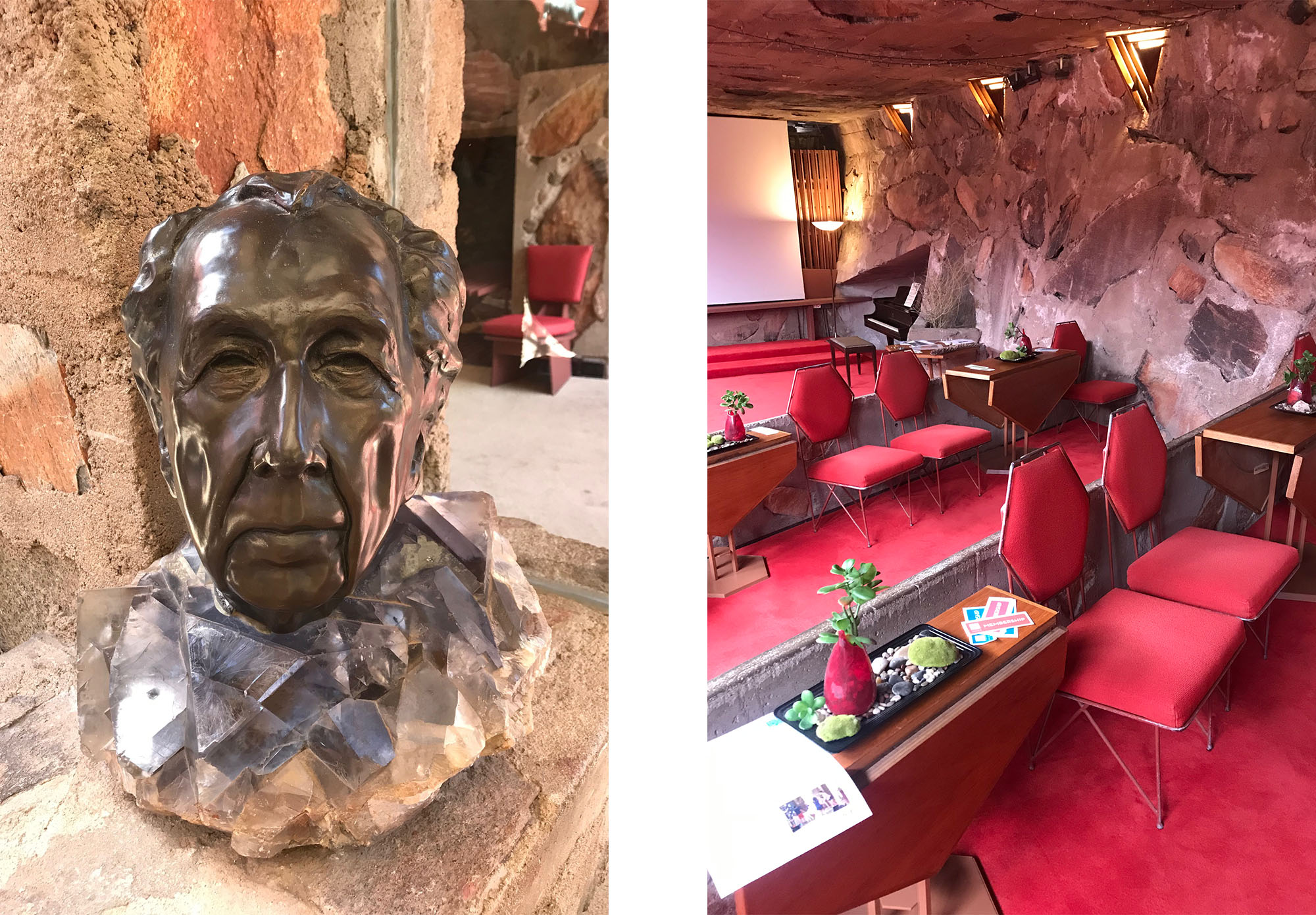 Left: A sculpture of the architect in his home. Right: The cabaret, often used for musical performances.

Wright was 70 years old when he started buying up several hundred acres of land in the foothills of the McDowell Mountains near Scottsdale; he was already a grandfather and married to his third and final wife, Olgivanna Lloyd Wright. From 1937 to 1951, Wright’s architectural apprentices—which numbered around 30 at the time—toiled on the modernist construction, learning their teacher’s craft not in the classroom, but through hands-on practice.

In its heyday, the then-rural homestead was a vibrant creative hive that housed a printing press, a cabaret theatre, and a lecture pavilion, as well as impeccably designed communal areas where people could learn, work, and socialize. Fast-forward to today, and the property is both the headquarters of the Frank Lloyd Wright Foundation and an immersive-learning campus for the School of Architecture at Taliesin. As per time-honoured tradition, students still design and build their own desert shelters during their first semester, before departing for Taliesin in Wisconsin.

For non-students, informative guided tours bring you in to explore not only the property, but the life of its creator. It all begins in the outdoor entry courtyard, then continues into Wright’s office, which has a roof made of raw canvas and is filled with natural light. A stroll across the outdoor terrace takes you to a gathering room awash in burnt orange and Cherokee red. It is a mid-century modern dream, and visitors are encouraged to take a seat on Wright’s own furniture designs, such as origami-like Taliesin armchairs and long benches affixed to the wall. 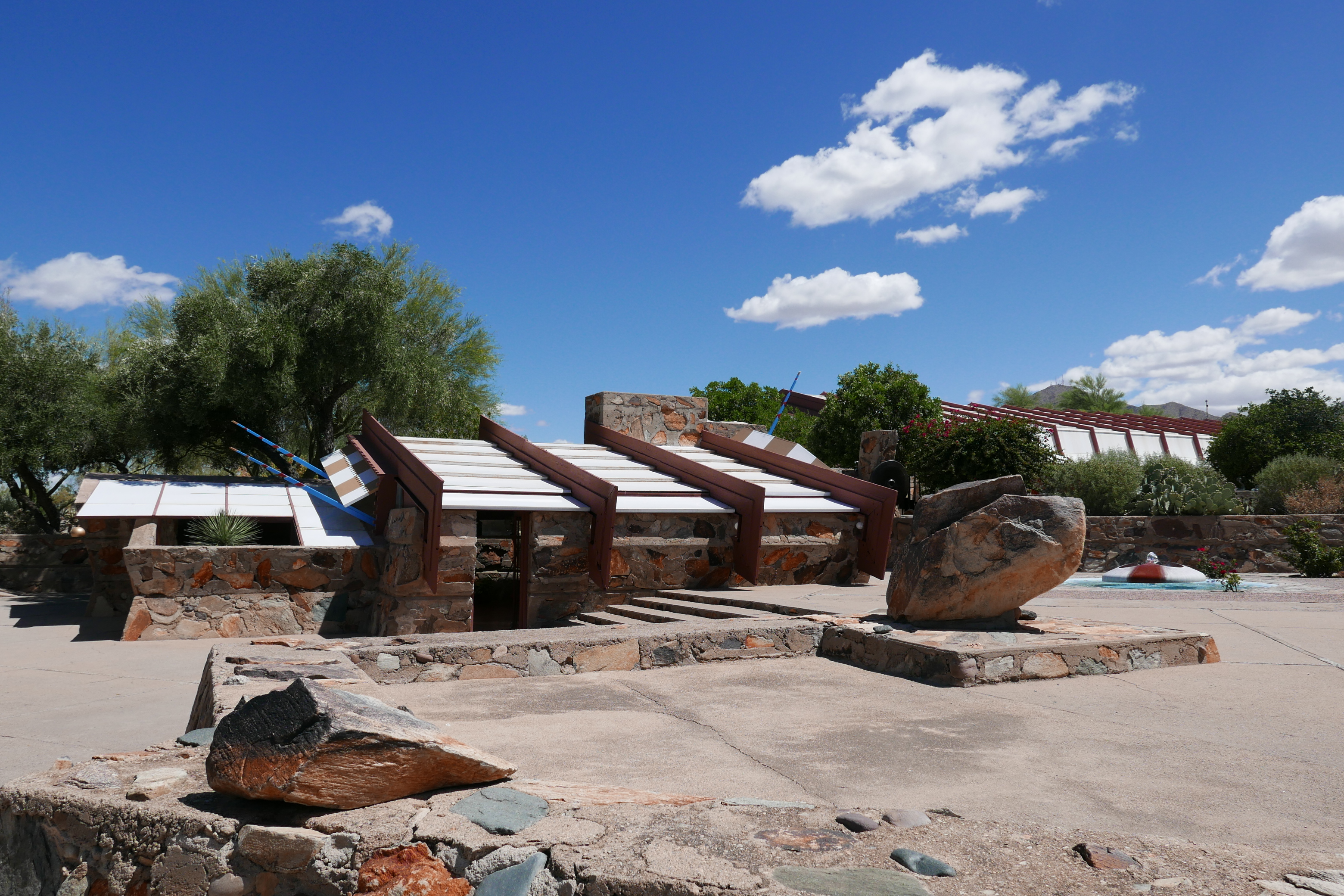 Taliesin West was built by Wright’s apprentices using materials from the surrounding desert.

Other highlights include a peek inside the architect’s bedroom, with its unusual stainless steel–covered bathroom, and a fanciful 100-seat pavilion bedecked with red chairs. Necessary updates have been made over the years, such as replacing redwood lumber with painted steel reinforcements, but the bones are original throughout, including the rough walls created with rocks sourced from the area, bound by cement and desert sand (dubbed “desert masonry”). Ancient petroglyphs found on the property, which is thought to have been a sacred site for the Hohokam people, are also on display.

Sixty years after his death, Wright’s legacy endures. To visit this National Historic Landmark is to see not only his creations, but to feel the inspiration Wright must have gleaned from this Arizonian setting. As the architect once wrote, “The desert with its rim of arid mountains spotted like the leopard’s skin or tattooed with amazing patterns of creation is a grand garden, the like of which in sheer beauty of reach, space, and pattern does not exist, I think, in the world.” 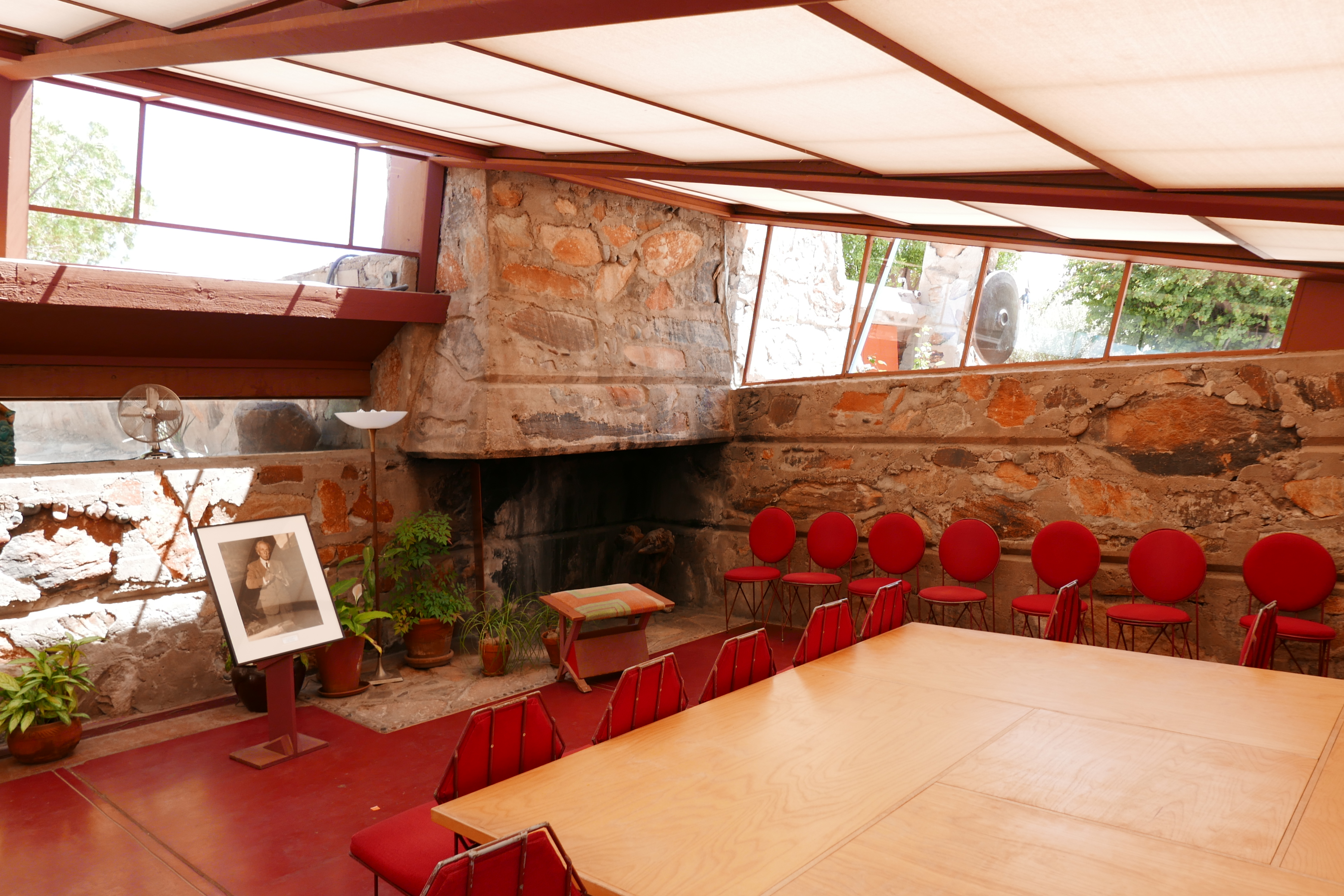