In the Yukon, the days never seem to end during the summer months. The midnight sun is out in full blast, which is just as well because there’s so much to do. The untamed landscape will test you here. But if you think that adventure travel in the Yukon is something inaccessible—requiring strength, skill, stamina, and an especially high tolerance for bugs that’s reserved for the outdoorsy and athletic crowd—you can rest assured that there are options for everyone.

Sure, there are opportunities for lengthy canoe expeditions in which you fight against the relentless Yukon River, or hikes along unmarked trails, but there are also more approachable opportunities for an adrenaline boost. Or you can just take in the wild beauty, accented by the purplish-pink fireweed that dominates throughout the region.

Imagine yourself flying shotgun in a ski plane above yet unnamed mountains and glacial peaks. No human being has dared to climb them, but you spot some resourceful mountain goats huddling at the top, bracing for a storm. You also get views of giants like mounts Vancouver, Logan, Queen Bess, Steele, and Saint Elias on one of the glacier expeditions with Icefield Discovery. If you’re lucky and the weather gods behave, you might even get to land on a glacier.

Or how about a horseback ride with Tombstone Outfitters through the expansive, rugged wilderness of Tombstone Territorial Park, near the southern end of the Dempster Highway. You’ll quickly learn that riding a horse is just as much about trusting yourself as it is about trusting the mischievous creature that is kind enough to transport you, as you sink into patches of mud or encounter the gentle whipping of branches. Enjoy the impressive views, picnic by a lake, and slurp some glacier water alongside your horse. You may see a bear walking along the side of the road, or some wild horses. Perhaps you’ll spot a moose, or maybe even a fox or two. 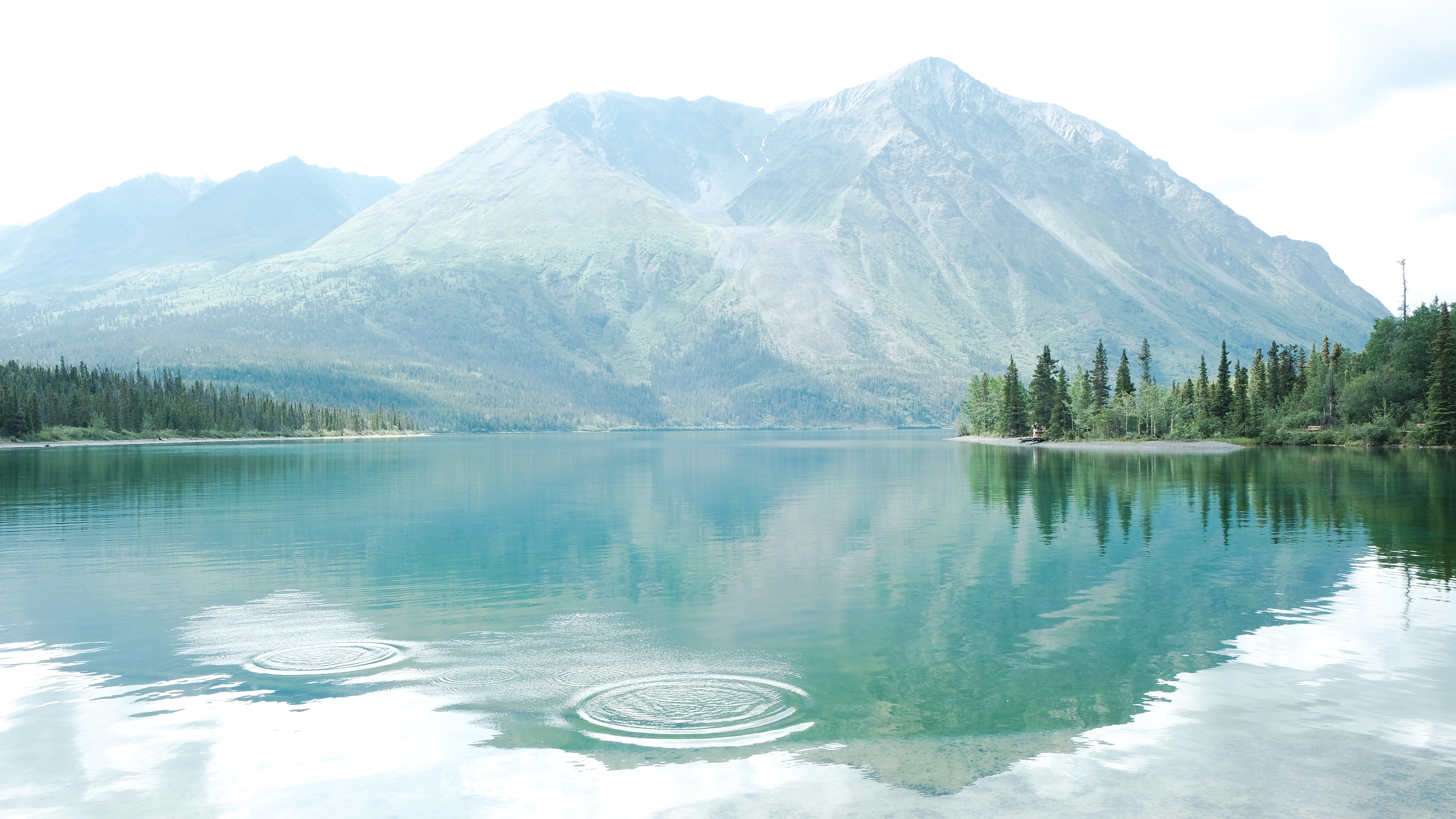 Kathleen Lake in Kluane National Park and Reserve outside of Dawson City.

There’s excitement of the man-made variety too. Jack London’s The Call of the Wild put Dawson City on the map in the early 1900s. Adjacent to a small museum dedicated to his legacy is a restored cabin, partially built with logs from London’s original, where he graffiti’d his name. London didn’t find much in the way of the glittering gold he’d hoped for, but worldwide sales of his book netted him over $1 million, so in a way he found something far more enriching. Today, visitors send or bring in copies of The Call of the Wild in their respective languages, proving that even the quaintest of museums can hold significant meaning for people.

Dawson City itself, a National Historic Site, is famous for the boom it experienced during the Klondike Gold Rush and retains its frontier-style colourful buildings to this day—some of which even lean against each other. During the day, visitors can take up gold panning at Claim 33 (a family-owned museum) or board the Klondike Spirit paddlewheeler, which passes by the residence of Caveman Bill—who made a cave above the Yukon River his home for over 20 years. At night, there’s an assortment of pubs and taverns like Bombay Peggy’s and Sourdough Saloon to visit, as well as Canada’s oldest casino, Diamond Tooth Gerties, where there are three nightly shows ranging from family-friendly to risqué.

But should you tire of the hustle and bustle of a city with a population under 1,500, then head to Tincup Wilderness Lodge, located near Kluane National Park and surrounded by unspoiled nature. Except getting there isn’t that easy—Tin Cup is accessible only by floatplane. 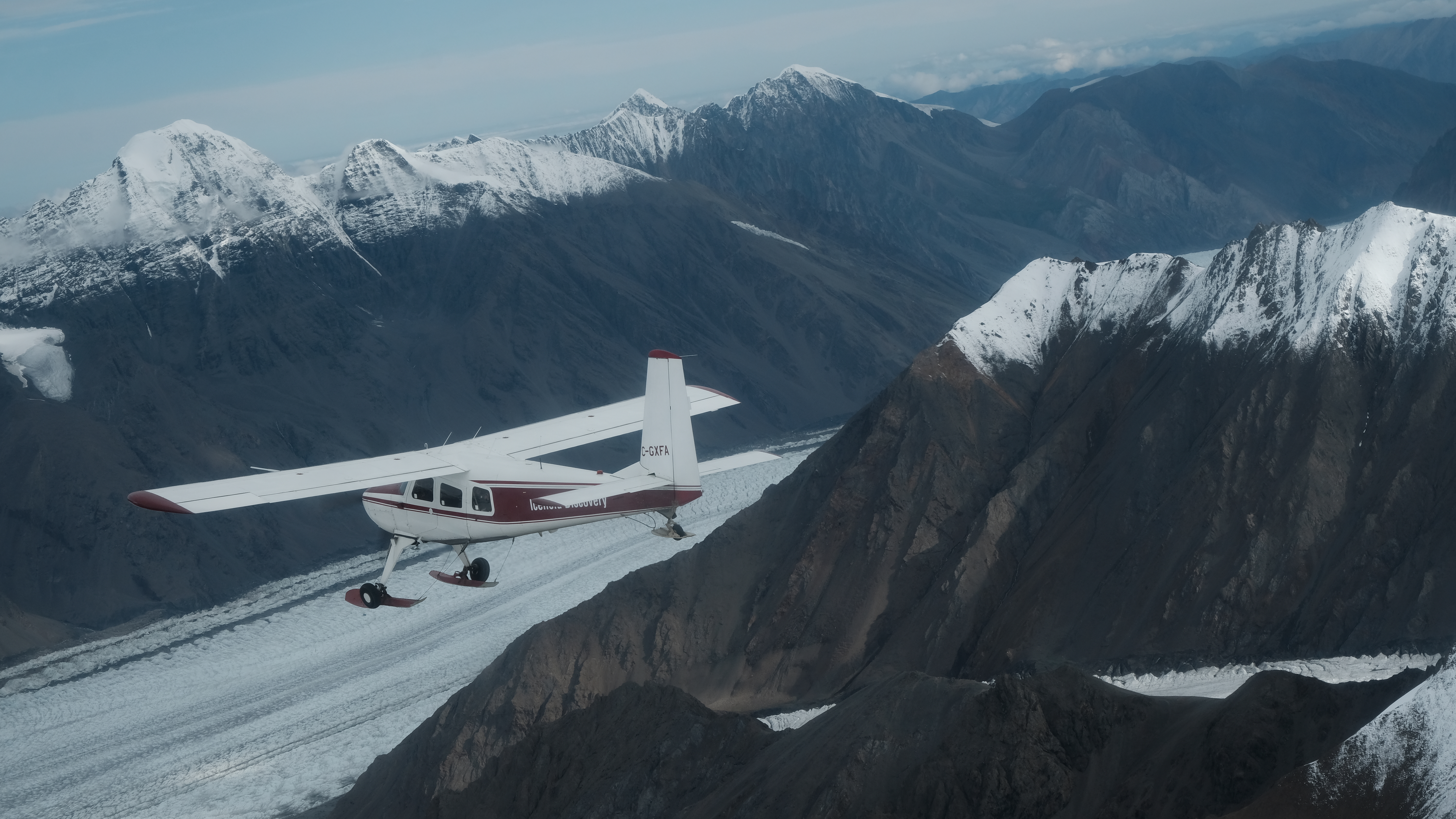 For floatplane pilot Darren Parson, watching the reactions of passengers as they take in the flight to Tin Cup for the first time is a lot of fun.

“Flying over the Yukon every day for work is amazing,” says Darren Parson, a pilot for Alpine Aviation, which frequently whisks visitors to Tin Cup. “I have a great view from my ‘office’ in every direction. It certainly never gets old, not at all.”

Although its roots date back to 1969, today’s iteration of the oasis is owed to the dream and dogged perseverance of its current owner, Meinrad Humm. An architect by trade from Switzerland, he took seven years to build the lodge, which has been open to guests for about three years.

With no phone signal to speak of and spotty wifi at best, activities at Tin Cup all involve confronting nature: kayaking, fishing, hot-tubbing, motor-boating, and hiking on a trail laden with not so easily identifiable mushrooms, wild blueberries, and wildlife. The subtly marked trail is a work in progress by Humm ensures that adventurous visitors are armed with a GPS/walkie unit and bear spray.

Being at Tin Cup also means soaking in the scenery while enjoying home-cooked meals prepared by Humm’s wife. Every few minutes, something changes, explains Humm. Perhaps it’s the light, or the waves on the lake, or an animal passing by (such as a grizzly bear, moose, or lynx). “It’s far more interesting than anything you could see on TV,” he insists. The retreat is also particularly conducive to catching up on books. The only quibble are the mosquitoes who occasionally come to feast. But as a Yukon-resident cautioned: “Don’t mind the mosquitoes, they need to eat too you know.”

As with the Yukon in general, the beauty of Tin Cup is that so much of it is untamed and unexplored—making for the best adventures. 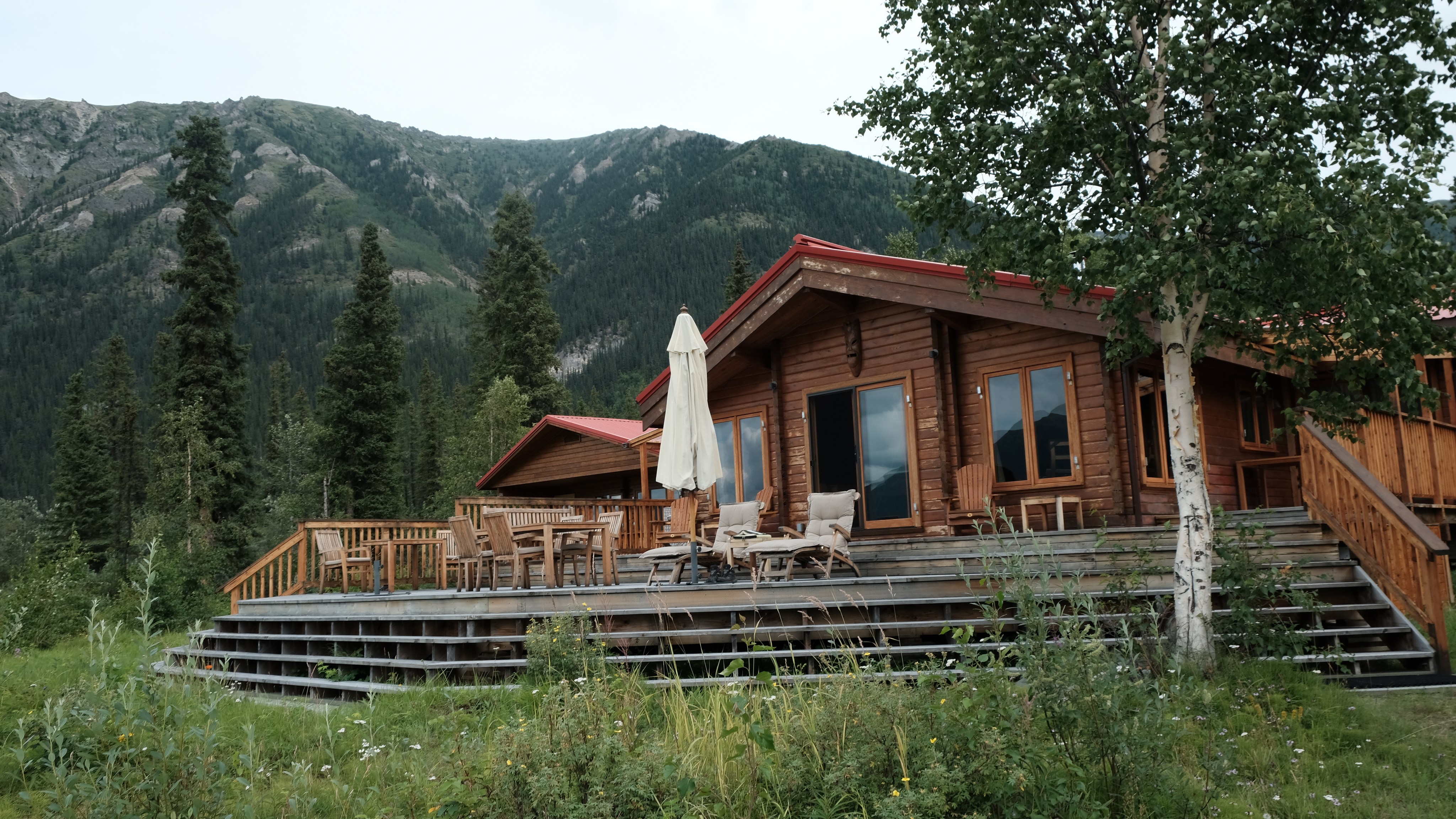 Tin Cup Lodge, perhaps more than any other location in the Yukon, possesses an extra ingredient few places can claim; it’s more than the setting, the flight, or the landing on the lake. 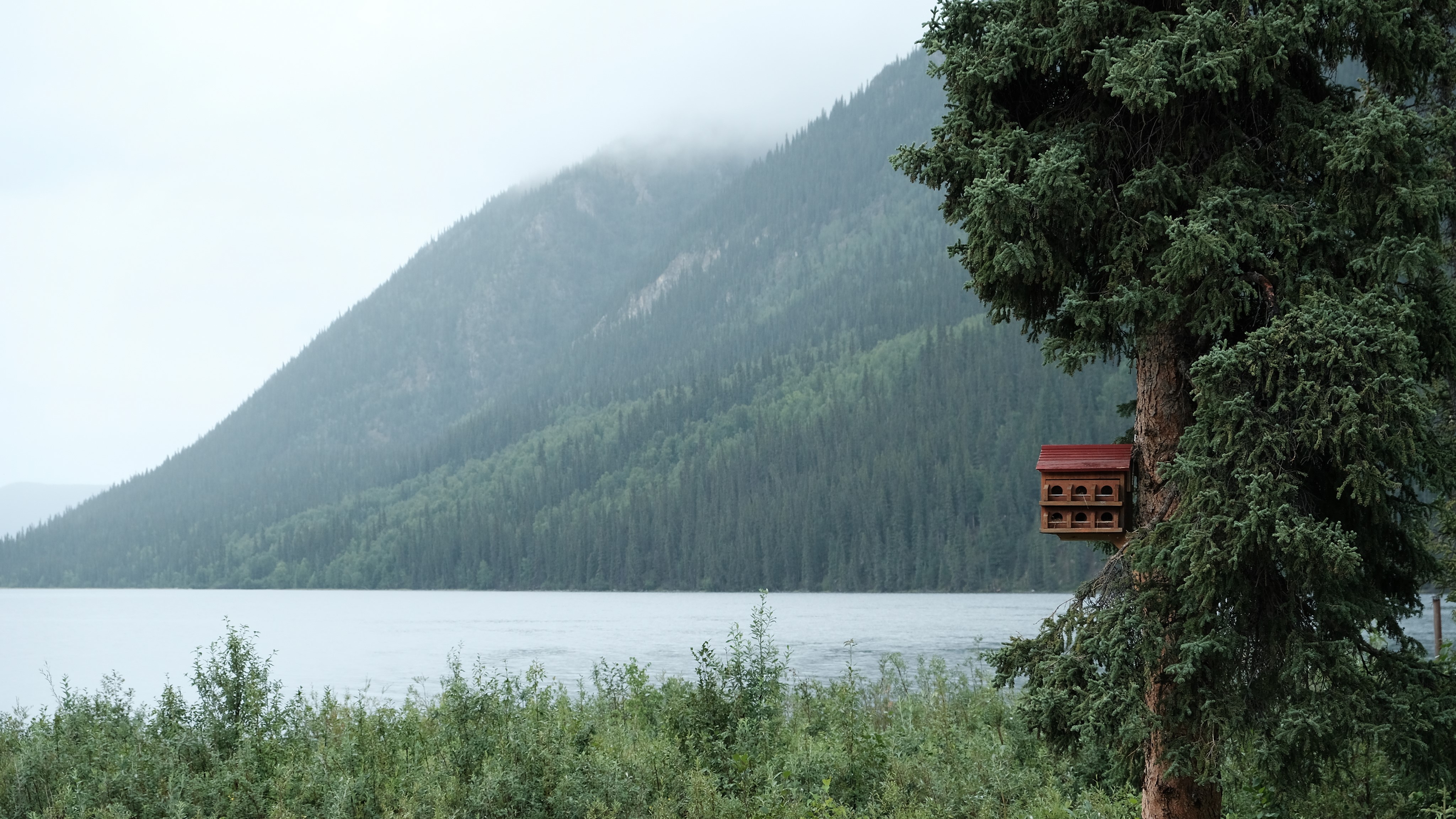 The logistics of building Tin Cup didn’t come easily. Everything had to be brought in either by floatplane or Humm’s personal helicopter, even fridges and mattresses were strapped to the planes, coming dangerously close to landing in the lake. 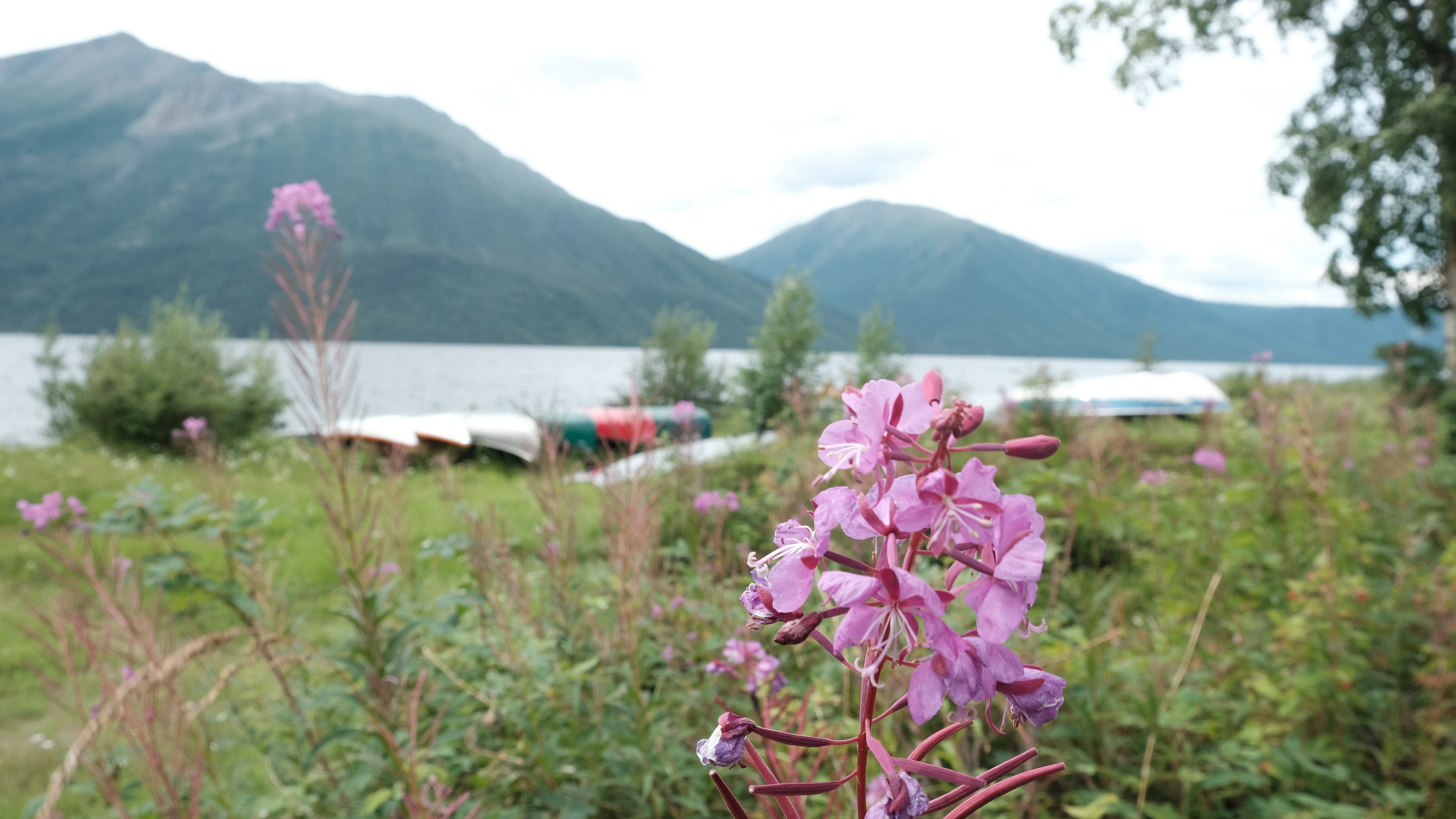 While working on his vision for Tin Cup, Humm found himself alone for four months. 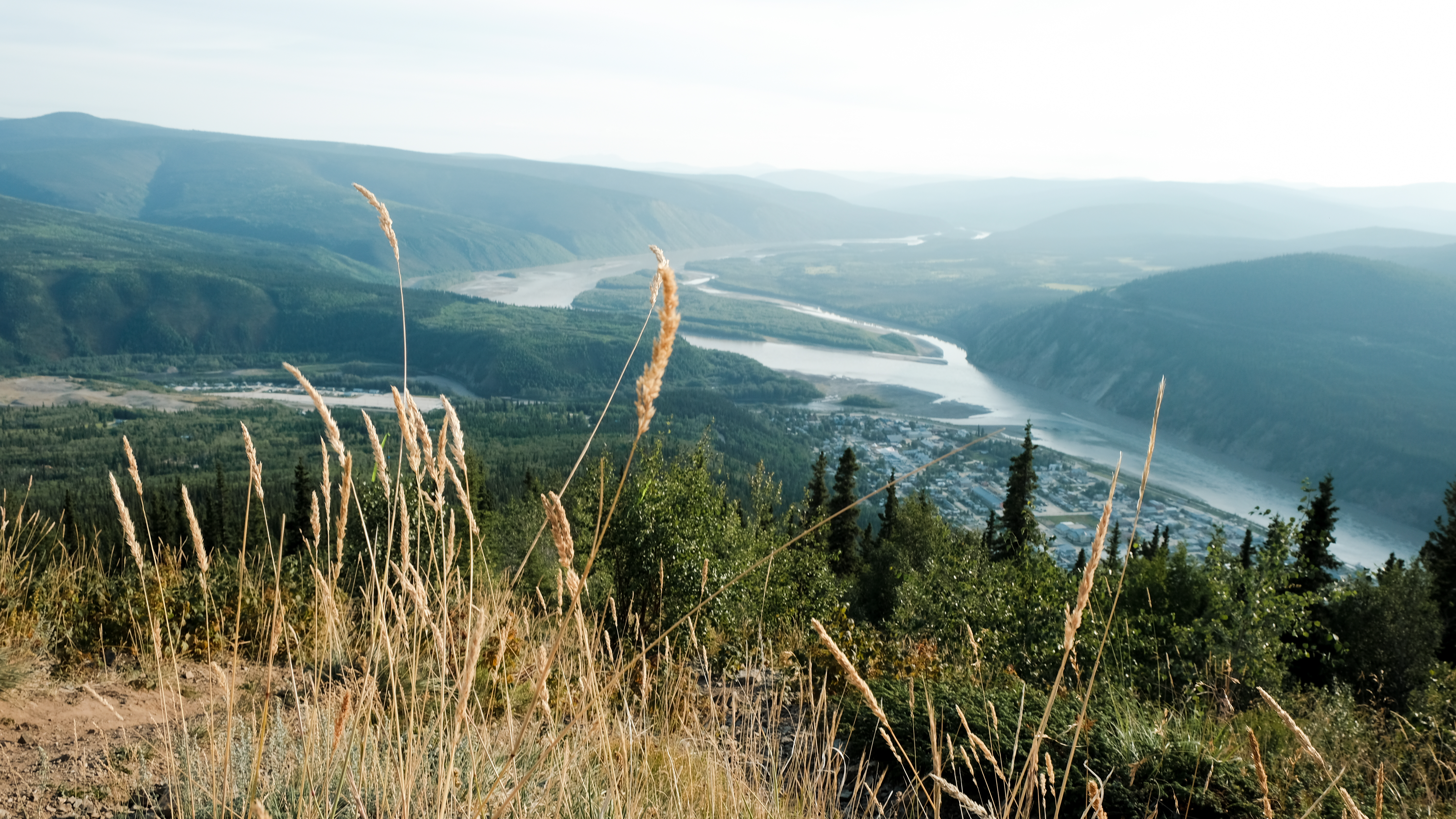 The view from Midnight Dome, a vantage point near Dawson City.