My fiancé is a natural. Or so says Yevgen Gurin, our dance instructor on board the Queen Mary 2: the quietly nostalgic transatlantic ocean liner that is bringing us from England to New York. Most people—why, it takes them two whole years to be what Yevgen, with his impeccable standards, considers passable. But for Michael—Yevgen considers—with regular private lessons, and a commitment to dancing three nights a week, Michael could do it in six months.

I, on the other hand, am a different story. Yevgen looks me up and down. He sighs.

“Ah well,” he says, as the dance floor of the Queen’s ballroom tilts with each successive wave. “At least you have a long neck.”

My grandmother—she was a natural, too. She spent several nights a week at home in New York doing ballroom, Latin, even a little swing. At 80, she’d gone to Buenos Aires to learn how to tango. But her favourite trips, she’d always told me, were the weeklong transatlantic crossings on the Queen Mary 2. With no ports of call between Southhampton and New York, my grandmother would spend her days in the ballroom — first lessons, then afternoon tea, then the tea dances, then more lessons, then at last the nightly evening balls, where she delighted in convincing every man in the room she was at least two decades younger than her 80-odd years. One day, she always told me, she’d take me with her—and teach me to dance as she did: lightly, gracefully, with flair.

When she was diagnosed with cancer in 2013, she quickly made arrangements for us both to make the crossing together—a trip we both knew would be her last. The night before the trip, she abruptly cancelled—she wasn’t well enough to make it.

One day, she always told me, she’d take me with her—and teach me to dance as she did: lightly, gracefully, with flair.

She insisted I go anyway, to experience what she couldn’t—“if you don’t, I’ll never speak to you again,” she told me. She sent me regular e-mail updates during my voyage: memories of her own annual crossings. I never sat out a dance, she informed me, extolling the grandeur of the Black and White Gala that opened each crossing. I’d danced a little—or tried to—with the Gentleman Hosts: the charming, spry gentlemen, mostly in their sixties, that Cunard provides free passage for in exchange for their dance floor expertise. But a combination of nerves and grief kept me from dancing more than a tripped-over foxtrot or two.

My grandmother died two weeks after my return. A friend sang “I Could Have Danced All Night” at her funeral. I never learned to dance.

But, five years later, I am here to try again. My fiancé and I had nine months to learn the basics for our wedding. We’d decided to start here—on the ship my grandmother had loved.

We’d arrived, as my grandmother had, with dance shoes and multiple black-tie outfits in tow. We’d intended to start with just the basics: attending the daily morning group class, practicing a little every night. But Yevgen has other plans.

“You must take seriously,” he informs us, as he whirls his dance-partner—his sister Kateryna—across the floor. “Every day. All day.”

Yevgen, after all, takes dance very seriously. The son of a Cunard officer, he’s been dancing on Cunard ships since he was three. (He notes, more than once, that he has been named the nineteenth best dancer in the world). He spends more than half the year teaching Viennese waltzes and Argentine tangos on the seas. He had a hobby, once—he briefly enjoyed learning tennis. But the truth is, he tells us, there are only so many hours in the day. Why do anything with them but dance? 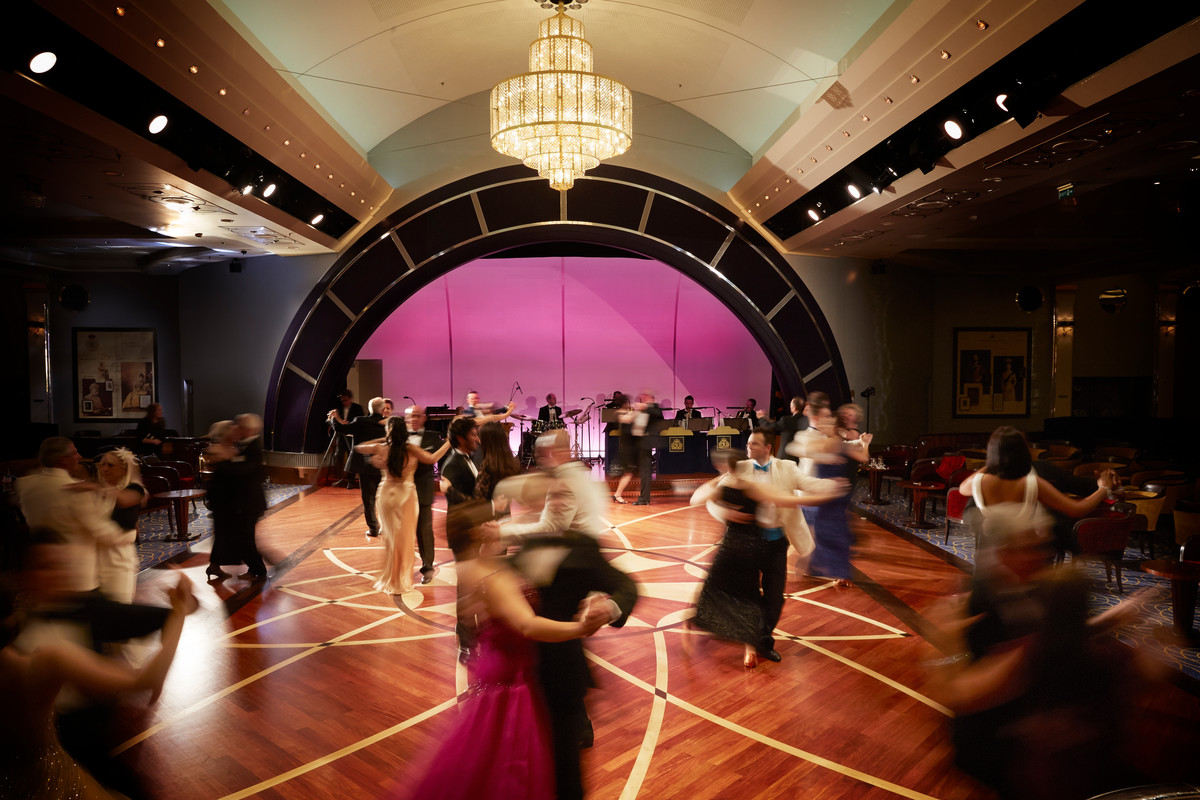 At first, we are wary. Our first night on board the ship, Michael and I file from dinner—like everything else on the Queen Mary, an endearingly formal, three-course affair—to the ballroom, only to discover that nearly everybody seems to know what to do but us. We cannot keep count to the music. We cannot tell the difference between a cha cha and a rumba. I trip over my own cocktail dress. We watch the dancers in silence, nursing gins, maintaining the pleasant fiction that we’ll try the next one until, at last, the band packs up their instruments at midnight.

But then we take another lesson—and another. We show up, with about 20 other couples, each morning at Yevgen’s classes. We learn the basic steps of a waltz, the New Yorker half-turn of a cha-cha, how to stay upright when the waves tilt the boat. Yevgen plays bad cop—adjusting our form with deadpan sighs—until at last we can dance without catastrophe for 30 seconds, then a minute.

By the third day, we’ve started coming back for the afternoon practice sessions (we learn, quickly, not to eat too many of the cucumber sandwiches and scones that comprise the Queen Mary’s languid afternoon tea). We dance for a whole song without falling over. By that evening’s Black and White Gala, we finally dare to do a waltz or two.

There may be only so many hours in the day—but on the Queen Mary, time runs differently. A week at sea, with no professional obligations and minimal Internet, is—we realize—the ideal span of time to devote oneself entirely to a new hobby. Some of our dinner table-mates have taken up serious water-colouring. Others have decided upon bridge, or flower-arranging, or chess.

But our people—and our newfound friends—are the dancers. They range in age—from couples in their twenties to those in their nineties—and in skill, but they all invariably make it to Yevgen’s morning classes, no matter how much they’ve been dancing (or drinking) the night before.

There is an impeccably-dressed woman in her eighties who wears the same slinky lace gown in a different colour every night, and who smiles graciously at us whenever we miss a step. There is a Canadian couple in their forties—beginners, like we are—with whom we regularly review the steps (and compare Yevgen’s notes). There is a boisterous Italian man who speaks no English, but regularly interrupts dance class to demand selfies for his wife back home.

We’d arrived, as my grandmother had, with dance shoes and black-tie outfits in tow.

By the end of the week, we’ve been subsumed into the shipboard cult of dance. We’ve gotten up the courage to take private lessons with Yevgen, who has taken to reminding me daily to be more graceful, more like a flower, in my dancing posture (“Where is flower!” he cuts in, whenever I let my shoulders slouch. “Where is my flower?”), and who manages, with military speed to get through five different dance styles in the space of 45 minutes. We learn the tango, the rumba, the cha cha, the foxtrot, the waltz. We learn to quickstep and to jive. At the nightly balls, we sit out fewer and fewer dances, as we grow more confident in our turns, our New Yorkers, our sways of the hips.

On our last night on board Yevgen pronounces us passable. “Of course you must take many lessons,” he says—writing down his social media information so that he can vet any teacher we encounter. (“I know them all.”) “I will like your Facebook pictures,” he tells us, with only the tiniest hint of a smile. “But only of you dancing.”

We take this as a compliment.

At the evening’s gala, Michael and I know what to do. We sail in from dinner, cocktails still in hand. We wait for the band. We take our positions—like flowers, Yevgen’s words echo in my ears.

We are not good dancers, by any stretch of the word. But tonight, I lean on Michael’s chest. He pulls me closer. We move in unison. We close our eyes and let the music move. Under Yevgen’s exacting, weeklong tutelage, we’ve learned to love dancing almost as much as my grandmother once did.

My grandmother, after all, was proudest not of her skill, but of the fact that she never sat out a single dance. Tonight, we don’t miss one either.

Dancing in My Grandmother’s Footsteps Aboard the Queen Mary