Slide up to the bar at Market by Jean-Georges, in Vancouver’s Shangri-La Hotel, and you might see bar manager Gianluigi Bosco handling tools that seem better suited to an adventure in the Far North than an evening mixing drinks: a jagged-edged backcountry snow saw, for instance, or a three-pronged fork resembling a climber’s ice pick.

Bosco is not prepping for Arctic exploration with those gadgets; he is wielding them to hand-carve six different types of ice for Market’s various libations. He even brands some of the frozen shapes with the Shangri-La logo.

If, in the past, ice has been a functional but otherwise unremarkable element of cocktail culture, these days it’s an essential artisanal ingredient. Consider it the bar scene’s best supporting actor. The appearance, quality, size, and shape of frozen water can be what separates a pleasing beverage from an unforgettable one.

“If you want to be one of the top bars in the world, you have to have crystal-clear ice,” says Bosco, a former competitive flair bartender who has shaken and stirred drinks in seven countries. “If I’m having a Negroni or an Old Fashioned and I don’t get a clear ice cube in it, something is missing … It has to be the right ice. It adds that wow factor.”

Clear ice is made using purified water or water that has had the dissolved air removed through a process such as boiling. Clear ice cubes melt much more slowly than the cubes found in your freezer. With little in the way of dilution, drinks retain their flavour, temperature, and integrity longer. When Bosco was first tinkering with ice while working in Australia a few years back, he would fill a picnic cooler with water and freeze it. The impurities and bubbles would sink to the bottom of the block, leaving about an inch of pure, clear ice on top. With that sheet of ice, he began carving. 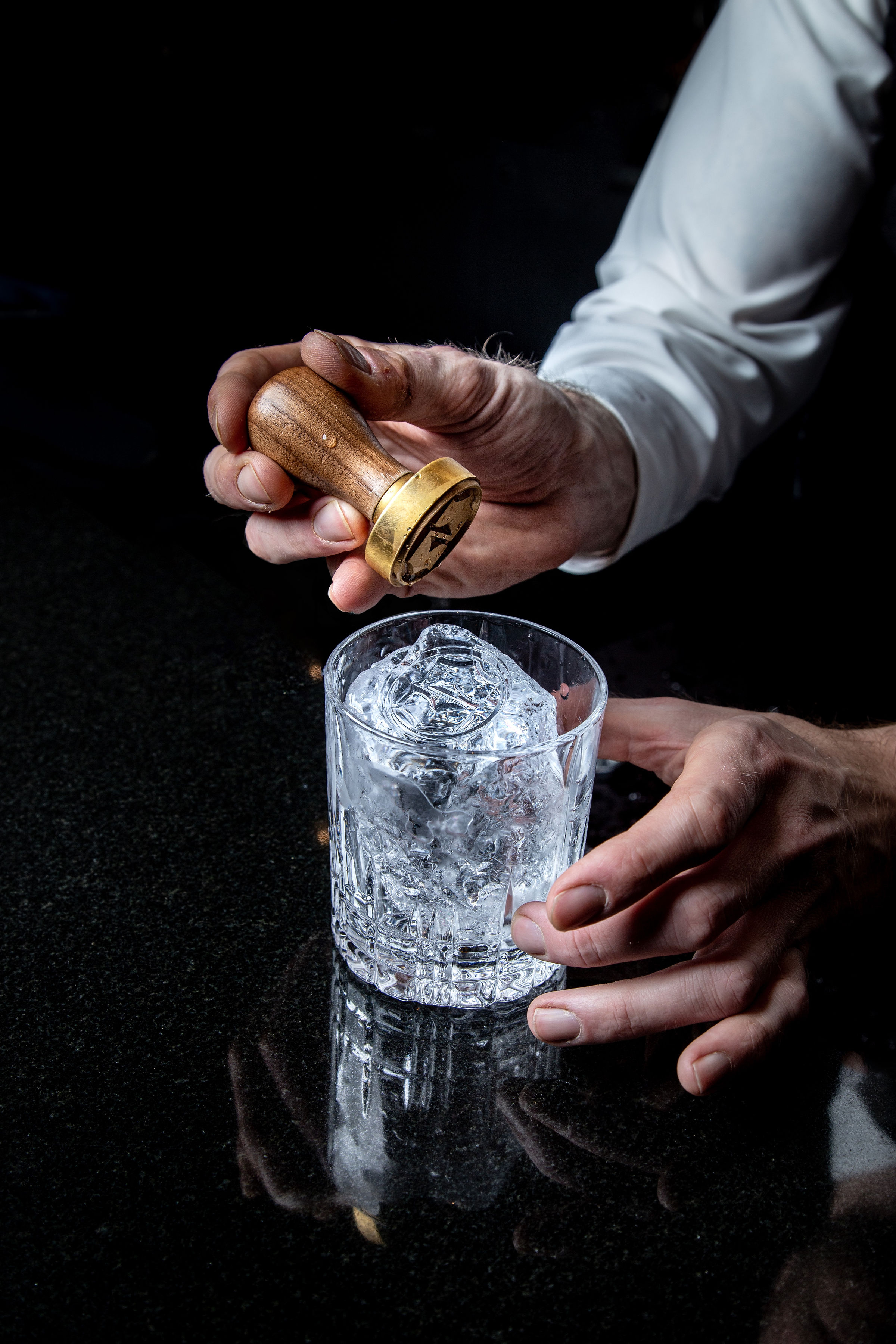 An ice cube emblazoned with an S at Market by Jean-Georges in Vancouver’s Shangri-La Hotel. Photo by Leila Kwok.

Now, he gets large blocks of perfectly clear ice delivered to Market from a commercial supplier. He slices, taps, and brands from there, having come up with various styles to suit different drinks. What looks like the peak of a mountain is a single thick spear of ice poking through foamy “clouds” in the Lost Horizon, Shangri-La Vancouver’s 10th anniversary cocktail. It’s made with Sons of Vancouver Distillery vodka infused with O-Five Rare Tea Bar’s Time Traveler tea as well as kopan masala syrup, orange juice, and Market’s citrus wine. A branded octagon of ice sits in an elegant champagne coupe for Golden Hour in Kyoto, a Japanese-inspired cocktail, while the tall, slender chunk in the rum-based Untiki is practically invisible, concealed in all its clarity.

While some local bars are carving custom ice to up their game, others are infusing ice with creative flavours and ingredients. Then there are shops that manufacture artisanal ice products, such as Dang Good Ice (which makes crystal-clear, two-inch cubes, among other products) and On the Rocks (“Ice isn’t just something you ditch in a drink; it’s something you build a drink around,” its website notes). In addition to Market, here are a few other bars in Vancouver where you can explore this new, delicious ice age. 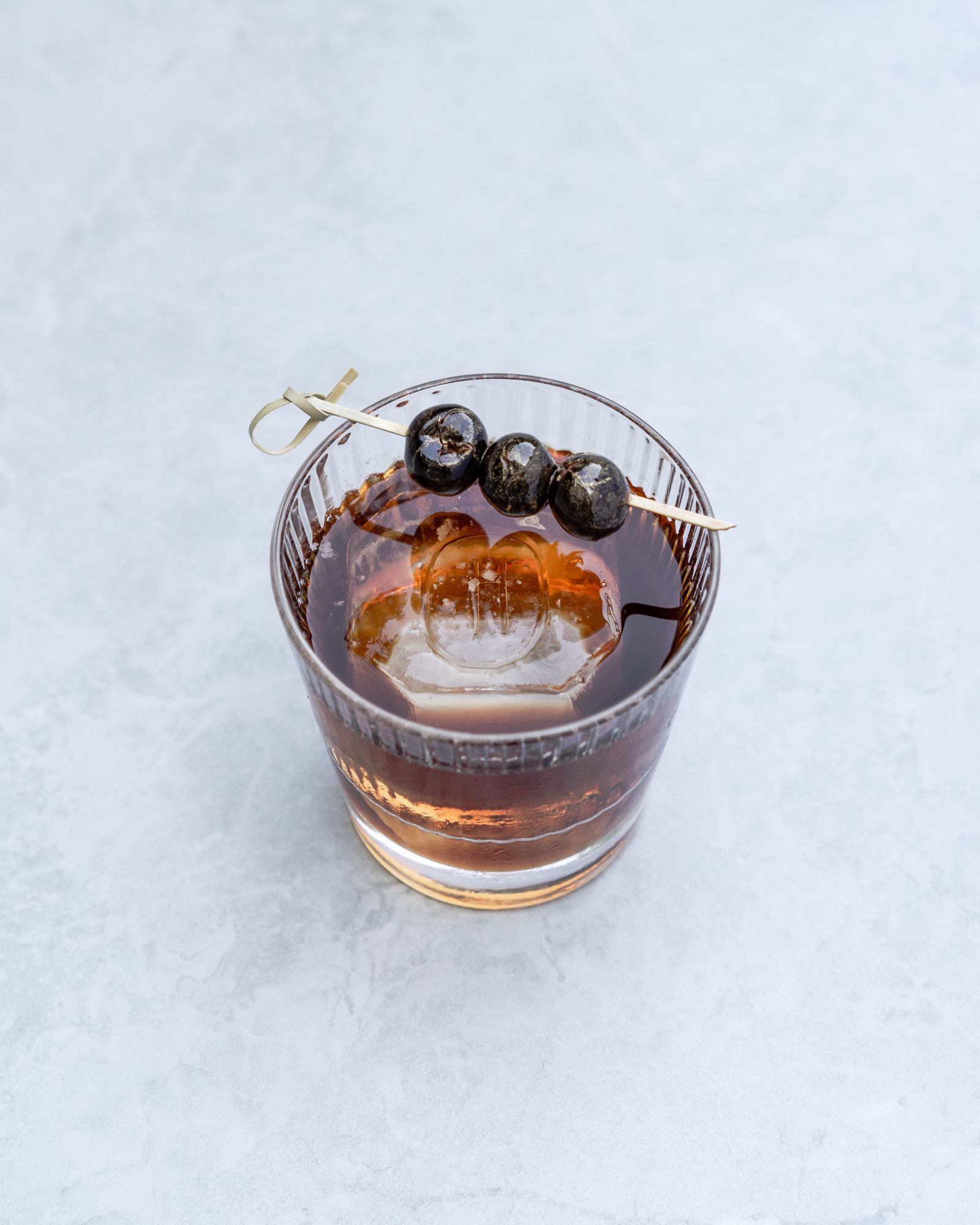 D/6 Bar & Lounge at the Douglas, an Autograph Collection Hotel

Lobby Lounge and RawBar at the Fairmont Pacific Rim

It’s almost impossible to see the large slice of translucent ice in the lounge’s Lucky Negroni, which is made with gin, sake vermouth, Bitter Bianco, and grapefruit peel.

The lounge uses extra-large ice cubes to slow down the dilution process in its lineup of signature cocktails, with each frozen shape customized to suit a different drink. The biggest chunks, such as the octagonal ice in the Peace Prize (something close to a Negroni, made with the artichoke-based liqueur Cynar, rye, sweet vermouth, black tea, and bitters), are branded with the H logo.