Darshani, 41 at the time, of the Balmiki caste prays in her home in Bhapur, Haryana. “I bought the gold I wear for myself…and I own this house.” After two years of physical abuse by her drunken husband, Darshani left towards her mother’s village, took out a loan, and did agriculture work to build her own life and raise her two children. After thirteen years, her husband has pleaded for forgiveness, sobered up and supports their kids in striving for a better future.

Human beings are visual creatures. Images sway us, starting revolutions and encapsulating the intangible emotions we struggle to find words for. On a global scale, this is the philosophy and importance of photojournalism—that in images, there is power. And with the rise of image-heavy social media apps like Instagram, photojournalists have become the unsung heroes of truth.

When we are so focused on the photos themselves, does it matter, then, who stands behind the lens?

“Anecdotally, we know that roughly 85 per cent of news photographers are men,” says Daniella Zalcman, a Vietnamese-American photojournalist and founder of online database Women Photograph. “As photojournalists we teach the world how to see. And if we’re doing that almost exclusively from a male perspective…we’re not completely and holistically covering our planet.”

In 2017, Zalcman, frustrated with editors claiming they didn’t know any female photojournalists to hire, created a spreadsheet of contacts to spread through the industry. The talent was there, but editors just didn’t know it. Zalcman’s spreadsheet grew into Women Photograph, a global network of over 900 women and non-binary visual journalists with an Instagram page of over 95,000 followers. “Many photo editors now use resources like Women Photograph as primary hiring resources, which is incredible,” she says. “The industry has been very receptive.”

“We are in a great time where we get access to the perspective of other people [because of social media]. Not just women, but the people whose stories are being told…which we haven’t seen a lot historically.”

As has become the custom in the modern age; where the real world falters, the Internet responds. Alongside Zalcman’s Women Photograph, online groups like Diversify Photo, the Everyday Projects, and Authority Collective have been born and bred from the Internet to amplify unheard voices. Formatted as online databases and archives, these online movements are creating spaces for underrepresented photographers—women and people of colour—to showcase their work, and Instagram is at the core of it all. At less than a decade old, the image-sharing platform has entrenched itself in modern society. Now, anyone armed with a smartphone anyone can share their voice. The mainstream is no longer the singular avenue for news stories, and the ripple effects are starting to show.

“We are in a great time where we get access to the perspective of other people [because of social media]. Not just women, but the people whose stories are being told…which we haven’t seen a lot historically,” says Elisa Lees Muñoz, executive director of the American-based International Women’s Media Foundation. The organization supports female journalists and photojournalists around the world through fellowships, grants, and special training, including workshops on online harassment and hostile environment training.

Initially founded as a directory of female journalists in 1990, Muñoz says social media has “drastically” changed the IWMF’s work. With a following on Instagram of 11,000 and almost double that on Twitter, the IWMF echoes Women Photographs pursuit of equal press through online reach. IWMF fellows have been published on some of the biggest names in the industry, like National Geographic, The New York Times, and The Washington Post. 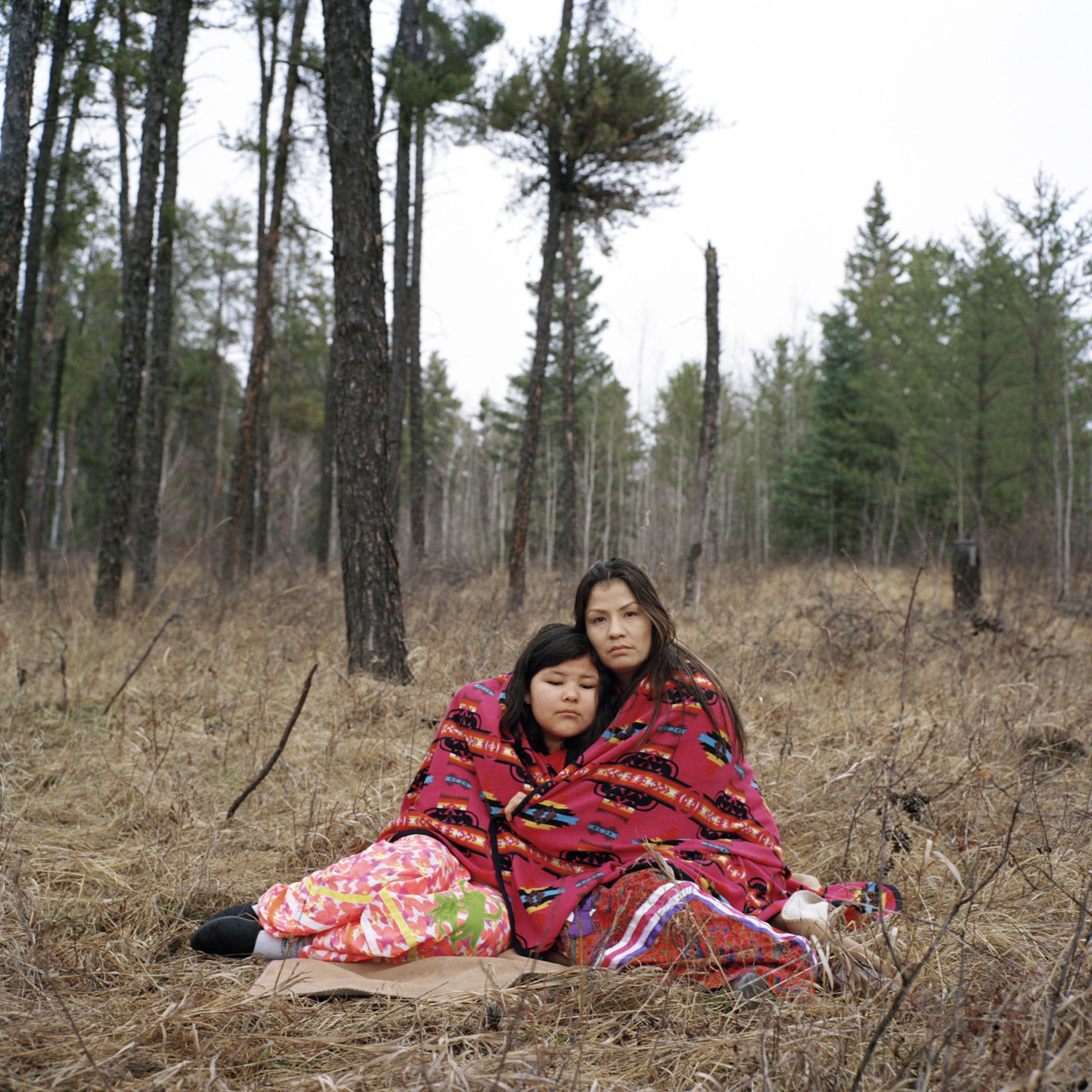 Dannataya Burns, 10, and her aunt Michelle Burns, 30, find peace among the trees in Prince Albert, Saskatchewan. Monica Lee Burns, Dannataya’s mother and Michelle’s twin sister, was found in a desolate area outside of Prince Albert, Saskatchewan in January 2015. Michelle was killed by a 38-year-old white male who received 13 years in prison. Photographed by Sara Hylton, member of IWMF and Women Photograph.

Sara Hylton, a Canadian-born, India-based freelance photojournalist, is a member of both IWMF and Women Photograph. She explains how the support of both organizations has helped her career in different ways. “IWMF has helped me cover stories in insecure places where I feel I can work safely and freely,” she says. “Women Photograph has been a psychological support, a therapist in this vastly dominated male industry.” With an Instagram following of over 80,000, Hylton has seen first-hand the impact of social media has had on photojournalism, “I’ve met some amazing people through Instagram, and have connected with photographers from around the world.”

But how far has the progress of modernity brought women photojournalists? “The newsroom has been a lot friendlier for women than it ever has been,” says Muñoz. “But in terms of real power in the media, there has not been a lot of change, even in the last 20 years.” The extent of social media influence has only reached so far, and the chasm between the real and online world translates a disconnect between what needs to be done and what is being done. While the online domain has seen strides in attempts for equality, the real world must still catch up, claims Muñoz. And yet the power of media-born initiatives has bled across communities, both online and off—most prominently, perhaps, the hashtag-bred #MeToo movement.

“I started Women Photograph [in 2017] when the #MeToo movement just happened to blow up. Understanding why there are social implications of silencing or ignoring women voice was made even more relevant,” says Zalcman. “We have a different lived experience as women…We can get access to communities in different or slightly better ways. We need to make sure that half of our reporting core is made up by women.”

Montrealers: A Story in Portraits