If all artists are cultural observers, then performers are a special breed that act as cultural mirrors. The relationship between life and performance is one of synergy and constant feedback. In times of hardship or major cultural shift, there is often an explosion of art. Perhaps this is because creativity and innovation often spring from the need to solve a problem. In the case of the pandemic, artists’ resources disappeared, work opportunities dried up, and performers were left without stages.

The recent trend of films releasing direct to streaming platforms has people worried about the long-term fate of cinema, and there is growing concern that theatre may suffer a similar fate—especially since localized live performance feels more vulnerable than Hollywood-backed projects. So does COVID mean the curtain has fallen? Not likely.

The first ever horror movie filmed entirely over Zoom, Host (2020), was released in July, and a slew of other quarantine-themed films are sure to grace our screens soon. Likewise, forcing performers offstage and into quarantine hasn’t stopped films’ production; it merely evolved. Technology has fused with ancient practice to create something new that is unlikely to be replicated in the post-COVID era or at least won’t be made to the same effect.

London’s West End briefly reopened its doors to a limited number of masked patrons, but as of this week, like they were for the last nine months, the entire theatre district and its dramaturges are back in lockdown, creating their own stages and looking for a sense of community and thrill of performance to fill the void.

Many theatre companies have begun to stream tapings of previous performances for a fee. Ontario’s Stratford Festival launched a Netflix-esque service called Stratford@Home that offers filmed productions, interviews, and commentary, with some original content produced during the pandemic. Live streaming with a small cast has also become an option, but when restrictions were at their peak, actors around the world turned to Zoom as well.

Even though it would surely be easier to film and edit a production the same way the cast of Host did, can it really be called theatre at that point? The challenge that many theatre and dance companies face during the pandemic is maintaining the integrity of live performance in a new format that is socially distanced, safe, and sustainable. The Show Must Go Online (TSMGO), an online global Shakespeare performance group that arose out of the pandemic, combined the conventions of film, theatre, and Zoom to create something resembling all three. 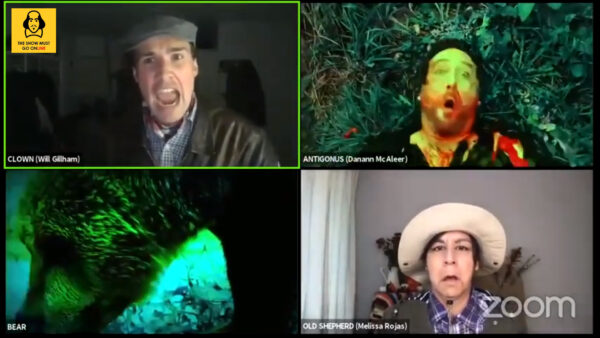 “What’s been interesting to navigate is how much we borrow from theatre and how much we borrow from film,” says Vancouver actor Matthew Rhodes, the associate producer of the project created by UK-based Robert Myles and Sarah Peachey. What began as a Shakespeare reading group—at a time when, according to Rhodes, “everyone and their dog” was doing Shakespeare readings in response to the pandemic—has evolved into something very different.

A cursory tweet from Myles launched a series that has accumulated a total of 222,400 viewers over 40 shows, a Patreon that serves as an out-of-work-actors’ hardship fund, and even merchandise. But more importantly, it gave actors and theatre-goers around the world something positive to hold onto.

The original group of 21 actors set out to read the first folio of each of Shakespeare’s works in chronological order, but after the initial performance, each subsequent show became more and more elaborate. The actors noticed that little things such as passing a letter between Zoom squares really excited the audience so they stepped up the production value each week, pushing the boundaries of what was possible with Zoom. By the 16th show, A Midsummer Night’s Dream, the actors were dipping their cameras to mimic dances, rolling over on couches, and even creating stage kisses: a delightful yet painfully ironic moment of connection between people separated by computer screens, countries, and COVID. For Titus Andronicus, a brutal and bloody story, the cast channelled Quentin Tarantino, filling spray bottles with fake blood and going to town. “We tell the actors to get carried away with the joy,” shares Rhodes of the experience.

Actors of all backgrounds (from Broadway to fresh out of drama school) apply each week to be part of the show and are selected based on fit for the role and enthusiasm. “We’re just gonna take all these people. Shake it up. There we go. So it’s really fun,” says Rhodes, mimicking a cocktail shaker. “Our three witches circled the globe,” he says of the Macbeth performance, when each actress was stationed on a different continent. 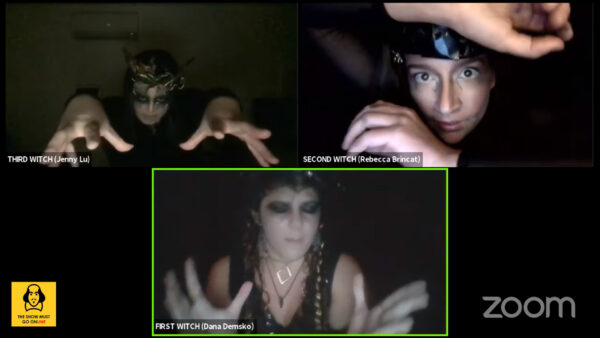 The performances are live streamed on YouTube every week and then remain there in perpetuity for people to revisit, but it’s the anything-can-happen hijinx that really capture the spirit of theatre and live performance and separate this project and those like it from other artistic outpourings we have seen recently.

“We always try to create the sandbox we know we can play within,” Rhodes says of constructing the shows from the actors’ homes. He feels that performing from home with curated backdrops and practical effects not only enchants the audience but “creates that theatrical feeling of shared space.” He believes “we are all sharing this weird space of a COVID quarantine.”

However, he admits: “What you lose from theatre is hearing the audience. As much as we can, we feed in the audience engagement to the actors” from the live chat that takes place as they perform. And of course, things do go wrong. From losing the spot in the script to camera malfunctions, the actors have to be prepared just as in a regular performance.

TSMGO has caught the attention and hearts of many. CNN named it one of the “50 ways to experience culture from your couch,” and Broadway World, Playbill, and BBC Newsnight all ran features. The troupe performed the final show of the series, The Tempest, in November but only paused for a brief hiatus before announcing a special by-donation performance of A Christmas Carol adaptation by Ian Doescher on December 18.

The holiday season has always been prime time for theatre and live performance, and their interpretation of A Christmas Carol will be a welcome addition to this month’s lineup of such online holiday performances as Goh Ballet’s The Nutcracker.

Who’s to say what the future of live performance will look like or if companies like TSMGO will continue? The vaccine and promise of normalcy seem close at hand, so if this winter is the last season of online theatre, perhaps it is a blessing in disguise. If we don’t see any more of this Zoom theatre (or as TSMGO calls it, performance on autocue) in the new year, hopefully that means these talented individuals have returned to paying work. Though, perhaps we will miss all of these global actors together on one screen.

Theatre Actor Jonathon Young Transforms the Landscape of the Medium

The Show Must Go On(line): A Look at Live Performances in the COVID Era