The ocean’s rhythm beats against bodies; the force of water and wind thumps like a liquid heartbeat. Wave upon wave, the surfers of Tofino’s Cox Bay face the water, interpreting the ocean’s language for signals in the swells. As each wave approaches, the surfers ready themselves, lying on their boards and facing away from the oncoming tide. On instinct, they start paddling as the wave picks them up and, for a moment, the sea and surfer flow as one.

The origin of surfing itself is unknown, but most view the sport as deeply entrenched in ancient Polynesian culture, which saw surfing—the dance of man upon water—as an art and a way of life. When they first observed surfing in Tahiti, European colonizers described it as “the most supreme pleasure.” It’s even thought that this pleasure inspired Thomas Jefferson to include the pursuit of happiness as an inalienable right in the Declaration of Independence.

It seems unusual to think of a place like Tofino, the little town at the very edge of Vancouver Island in the Pacific Northwest, as a surfing paradise. But the combination of a moderate climate, expansive beaches, and consistent waves have earned Tofino the title of Canada’s surf capital. One of the best guaranteed spots for a good surf is Cox Bay, where the beach is shaped in a perfect U and flanked by lush rainforest on either side. 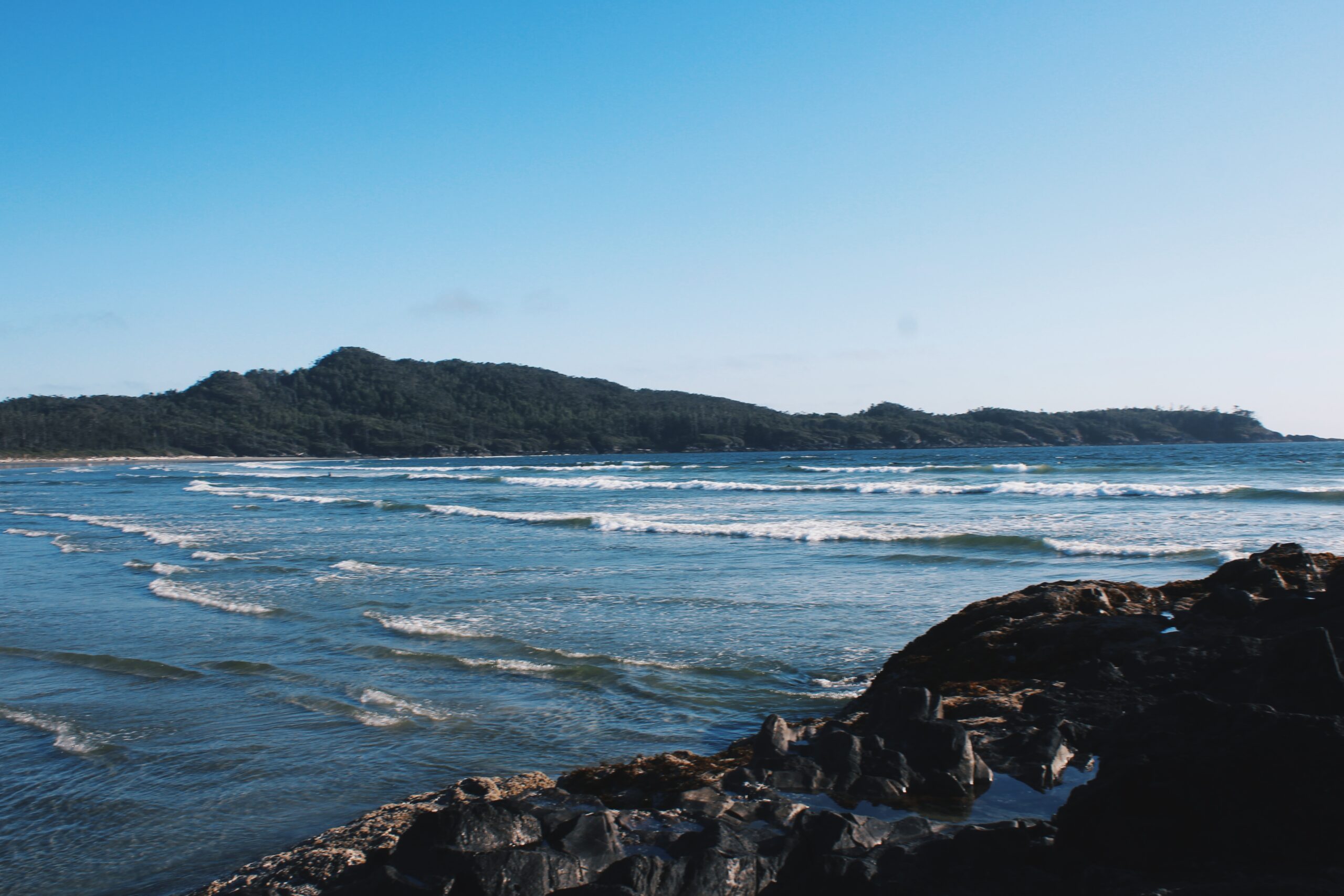 “If you wanted to, you could surf here every day,” says Markus McRurie, marketing and guest services manager at the Pacific Sands beach resort, which opens up directly onto Cox Bay. “I’ve had surfers from all over the world come here, and they’re bewildered that we get waves every day. A lot of places that you surf, you’ll have the [peak] season in October to March, but in June to August, it’s actually flat like a lake. So it’s really cool that Canadian surfers get to surf every day.”

Since the ’70s, Pacific Sands has been a choice of stay for surfers who can, quite literally, roll out of bed and into the waves. Once a seaside motel, the resort has transformed into an all-suite retreat. In 2018, it constructed the oceanfront suites—rooms specifically catering to visiting surfers, with direct access to all 2,500 feet of Cox Bay’s oceanfront. And four years ago, it opened a little surf shack operated by Surf Sister, Tofino’s famous women-run surf school and beacon of the town’s female-forward surf scene.

Perhaps the most striking aspect of Tofino’s unique surf culture is that, compared to the rest of the world, women are thriving in it. In a relatively male-dominated sport globally, any given day on a Tofino beach would see just as many women surfers as men. It’s not just the mere existence of plenty of female surfers in Tofino that’s exceptional, it’s that there is a palpable culture of empowered and empowering women encouraging each other to excel in the sport. These women are good at what they do—and they’re only getting better.

How is it that this tiny town came to be a surf haven for women? “We never grew up with a surf culture here, and when it came to the sport starting to catch on, we didn’t have any examples to look to. So we created our own culture which included women,” explains Krissy Montgomery, the current owner of Surf Sister. Montgomery moved to Tofino from Nanaimo in the early 2000s “Blue Crush–style” with a group of girl friends whose sole interest was surfing. “The vibe here for the most part was quite friendly, so I didn’t feel as intimidated as females might in Australia or America where these surf cultures had been there forever and had been relatively sexist forever,” she says of her first surfing experiences in Tofino. 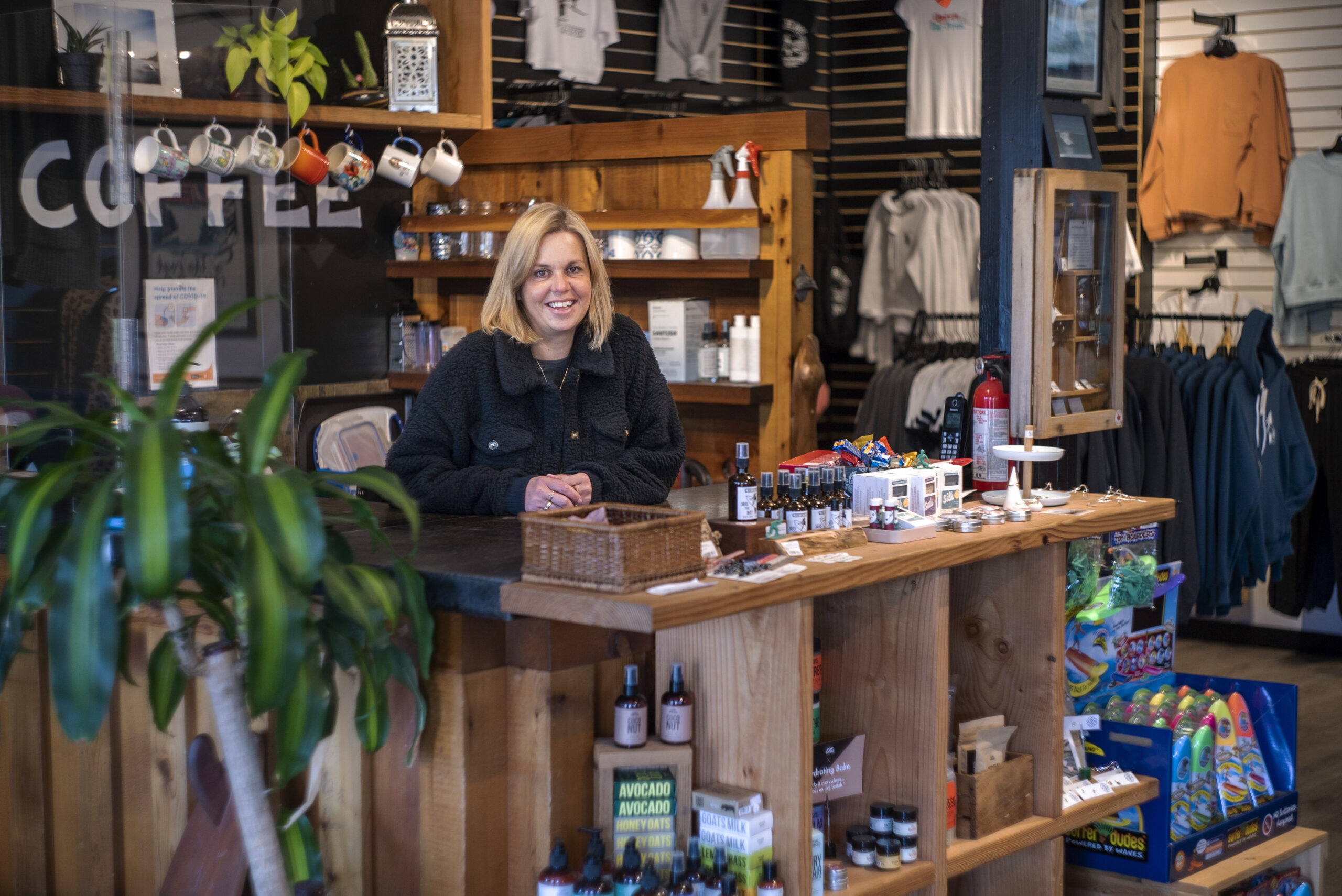 Montgomery was introduced to the original owner of Surf Sister after sending her a drawing that would become the school’s new logo—a silhouette of a girl holding a surfboard—and began working for the company in 2002. Within a month, she became the manager, and in 2009 she bought the school. In the past decade, Surf Sister has grown exponentially along with the surf scene in Tofino, becoming the largest female-instructor surf school in the world with over 30 on staff.

“As Surf Sister got some legs, I think a lot of females who had kind of been on the fringe before were like ‘Oh, here’s my in. Here’s my way of getting into the sport where I feel nurtured, where I feel safe, and I don’t feel like I’m going to make a fool of myself,’” says Montgomery. “It was a really safe space to come into and learn how to surf.”

Providing that safe space allowed a lot more women to take up surfing in Tofino and level up into the realm of competitive contests. Despite Tofino’s progressive track record, the annual open competition, the Rip Curl Pro, offered little for the female divisions: their surf times were during the worst wave conditions and their prize money was a fifth of the money given to the men. (Only very recently did the competition make the prize money equal for men and women, following a decision made by the World Surf League.)

“Every professional sport that women are in, and most professions that women are in, they’re getting paid less than men, and it’s just a bunch of bullshit,” says Montgomery, who started Tofino’s first female-only annual surf competition Queen of the Peak in 2010. Sponsored by Pacific Sands and held the weekend after Thanksgiving, when wave conditions are historically at their best, the competition draws the town to Cox Bay to celebrate local and international female talent.

“I remember the first year we had this group of girls that came up [to Queen of the Peak] from California. They were all semi-professional surfers, and we were all just blown away by them. They swept it; they won the event. And then by the next year, they came in second place, and our girls were stepping up. And the next year it was such a full-blown competition,” recalls Montgomery. “It really lit a fire on how the bar can be raised here.”

Perhaps the most striking aspect of Tofino’s unique surf culture is that, compared to the rest of the world, women are thriving in it.

With women such as Montgomery at the vanguard of an empowered surf sisterhood, the new generation of female surfers are taking the scene to even greater heights. “Now we have such a culture of young female surfers. The next batch of local surf kids is this group of really tight-knit females that are between 14 and 16 years old, and they are annihilating us,” says Montgomery.

Among the new generation are the Olin sisters, Mathea and Sanoa. “I saw them growing up on the beach,” says McRurie, who moved to Tofino 11 years ago to surf. “The level at which they surf is like, you’d think we’re in Hawaii. They’re pushing the boundaries of what is Canadian surfing.” At 17, Mathea is Tofino’s Olympic hopeful after being the first Canadian to win a surfing medal at the Pan American games last year.

The vibrancy of Tofino’s surf culture speaks to the nature of the sport itself. At 41, Montgomery still surfs three times a week. “To be out in the ocean, it’s just you and nature. There’s something really special about that,” she says. “People turn to the ocean for such different reasons. They [surf] to celebrate and be with friends, or they go to be alone, to grieve, to focus.” 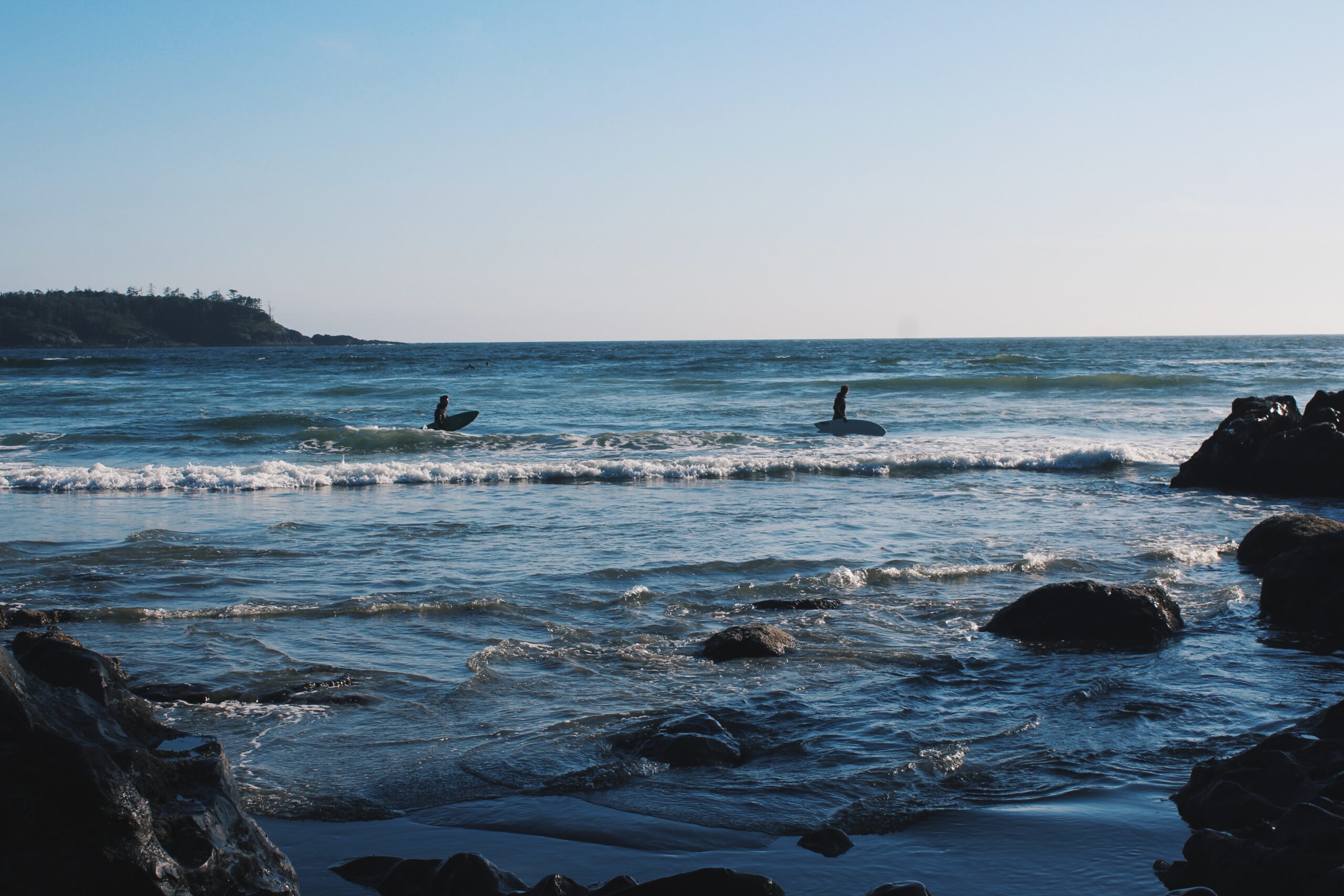 “People turn to the ocean for such different reasons. They [surf] to celebrate and be with friends, or they go to be alone, to grieve, to focus.”

I can understand the appeal of surfing; it echoes a primal need to conquer nature, to harness water like a bull. But waves cannot be tamed. This is the lesson surfing teaches again and again. During my own lesson with Surf Sister, I pause my attempts in the whitewash to watch as a surfer glides effortlessly through a green wave, his board like a knife slicing through the glassy water. One sharp turn and he’s thrown into the water, the wave swallowing his body and surfboard whole. The water will humble you.

Surfing is a lesson in mental strength as much as physical. To force your way into an ocean that often feels intent on spitting you back out again takes a fortitude and almost stubborn resilience. “It really pushes you because it’s not an easy sport. Surfers are usually very determined people,” Montgomery says. “It’s not a sport that gives itself up easily, so you really have to work at it. It pulls something out of you, a drive that you didn’t even know existed.”