As one of the most historically and culturally rich provinces in Canada, Quebec has a surplus of folklore and urban legends. Entire books have been dedicated to French Canadian fairy tales that are whimsical, beautiful, and dark. While the traditional Halloween activities of trick-or-treating and costume parties may be on shaky ground at the moment, there are plenty of spooky tales of ghosts, witches, demons, and devils buried deep in the soil of history just waiting to spring up and save the day. The generational practice of francophone storytelling in Quebec and the Maritimes is the perfect antidote to the COVID Halloween blues.

Raconteurs, the French equivalent of bards or minstrels, would recount märchen (fairy tales) that lasted several hours or even days to the people of French Canada. Similar stories appeared in New Brunswick, demonstrating the mobility of legends at this time as raconteurs travelled the region. Most of the time, the tales contain symbolic Christian undertones, tales of morality or superstitions reflective of the cultural landscape at the time. One such story is both romantic and unsettling, depending on which version you hear.

One version published in 1969 by Anselme Chiasson, a Catholic priest and folklore scholar, details a young girl whose heretic parents turn away a suitor because he is Christian, claiming they would rather their daughter be courted by the Devil than him. Soon after, the Devil himself appears at a dance, seduces the daughter, and threatens to whisk her away to hell as his bride. To avoid this, the family turns to a priest for help. He converts the family and marries the daughter to her original suitor, thus thwarting the Devil and giving the story a happy ending.

Some versions also treat the story as a cautionary tale for young women, portraying the daughter as rebellious and flirtatious. The Devil’s seduction becomes a metaphor for her wantonness. Converting to Christianity and marrying her original suitor signals her submission to the traditional domestic values of the time.

Some, however, are not even that generous. One alternative telling of the story has the young girl dancing with a stranger at the ball who, at the stroke of midnight, reveals himself to be the Devil. The young girl is horrified but cannot escape, and the Devil kidnaps her and takes her to hell where she remains to this day. Such versions are part of a Red-Riding-Hood-esque tradition that warns young women against the danger of dancing with strangers. 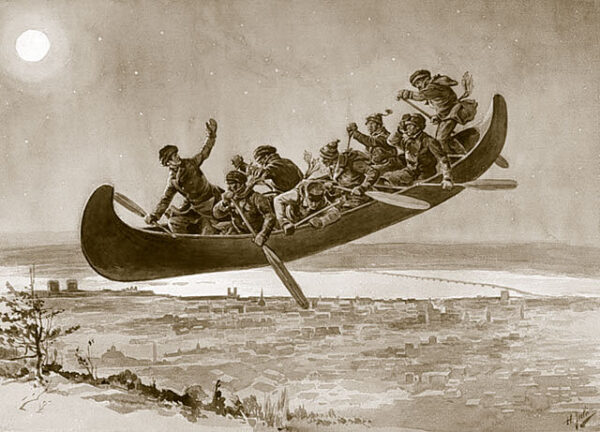 Many other Québécois legends include the Devil in some capacity either as the catalyst or consequence of the story. The Devil’s involvement can also occur when Indigenous stories are combined with settler stories, as in the case of the famous Flying Canoe legend. Originally a French folk tale about a nobleman who would skip mass to go hunting and was condemned by God to fly through the night skies being chased by horses and wolves, the story evolved after contact to reflect the society it was told in.

In the version still told today, a group of coureurs de bois make a deal with the Devil, who bewitches their canoe so it can fly but they must not speak God’s name or touch any holy objects or the Devil will take their souls. The ending of the legend, like the Devil at the Dance, varies. After a drunken New Year’s Eve party, the group of men almost crash into a church and take the Lord’s name in vain. Sometimes they manage to escape the Devil’s punishment, but in one instance they are forced to fly the canoe through hell each night and appear in the sky every New Year’s Eve.

Canadian Urban Legends: Newfoundlanders Can Tell You All About the Old Hag