There’s nothing quite as charmingly twee as a Wes Anderson scene—except, perhaps, a boxed diorama of a Wes Anderson scene. Using only watercolour and cut paper, Barcelona-based artist Mar Cerdà has captured the filmmaker’s quirky spirit with miniature sets from a selection of his iconic movies. The detailing is impeccable; one might need to squint to make out elements like the Darjeeling Limited’s microscopic elephant paintings, each stamped envelope in the Grand Budapest Hotel’s letter cubby, and the individual pores in Margot Tenenbaum’s bath sponge. “I love to recreate spaces, even without characters in it,” Cerdà says. “I firmly believe that a character can be defined by a space.” 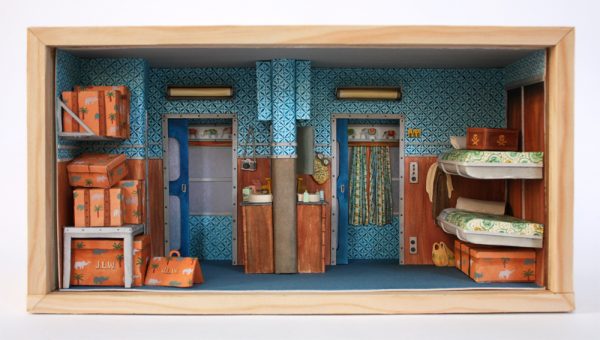 The 31-year-old artist attributes her studies in art direction at the University of Barcelona’s Cinema and Audiovisual School of Catalonia for her cinematic approach to illustration. “[I was] not only influenced by movies, but also by the way of making movies: the light, the mise-en-scène, and, above all, the space.” While at school, Cerdà worked illustrating children’s books, when, “suddenly 2-D wasn’t enough for me,” Cerdà says. “So I started cutting paper and creating a little house in 3-D for the main characters of my fist book collection.” Though the dioramas were initially an extension of the illustrations, they soon evolved into standalone pieces, her first being a tiny circus inside of a matchbox.

Even beyond her Anderson works, Cerdà’s portfolio thrives on the whimsical. Whether in subject matter (such as Jim Henson’s Labyrinth) or in medium (like painting doorways inside of tuna cans), Cerdà delights in dreaming outside the box, all the while working within. Impressionism in the Age of Industry at the AGO