The beauty and wellness space can sometimes resemble the Wild West. The $4.5-trillion industry encompasses everything from personal care to real estate, with thermal and mineral springs in between. And as in the Wild West, anything goes—a chaotic and unorderly mash of geography, history, folklore, and culture is entrenched in its desert landscape, meaning what is considered healthy or beneficial varies based on where you situate yourself. Figureheads of wellness, such as doctors, are able to direct people through the free-for-all, but in recent years personalities have emerged who dedicate themselves to influencing the public—or more precisely, women—toward natural alternatives in the name of self-care.

Canada’s recent legalization of cannabis has created the means and opportunity for beauty and wellness entrepreneurs to expand their already vast territory. The CBD skin-care market alone is predicted to grow year-over-year by 32.45 per cent, reaching $1.64 billion U.S. by 2024. It would appear that cannabis is the new solution to all of women’s problems.

But how effective are these cannabis-oriented solutions, really? And are companies pink-washing issues to sell women more products? 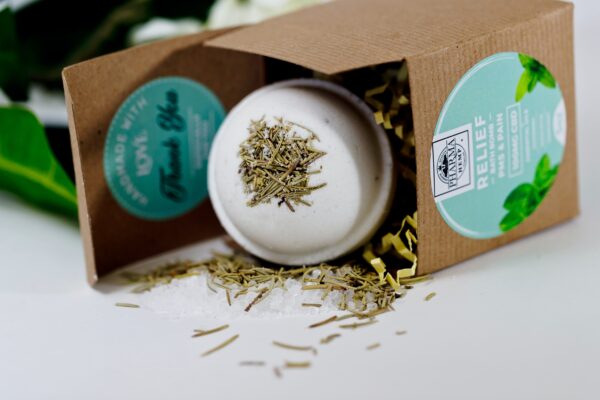 Finding resources that detail the benefits of cannabis and skin care that weren’t sponsored by cannabis companies is difficult, which is a red flag in itself. But according to Healthline, the anti-inflammatory properties of the cannabinoid CBD (the non-psychoactive compound found in cannabis) can treat psoriasis and eczema when applied topically. This makes sense given that cannabis skincare products latch onto our bodies existing endocannabinoid system which controls immune response, cellular communication, (as well as appetite, metabolism, and memory). Topically applied cannabinoids produce their effect by interacting with cannabinoid receptors in the area they are applied to. However, the same article also explains that people who applied 3 per cent cannabis cream for acne twice a day saw a significant decrease in sebum (oil that causes acne). The other ingredients included in the cream are not mentioned so there is no way to know for sure if they contributed to results.

Katie Iarocci—director of product innovation for 48North, a cannabis company with its own CBD wellness range—warns that not all CBD products are created equal. She says of the surge in CBD beauty, “there seem to be quite a few ‘cannabis’ beauty products out there that really just include hemp oil. Let’s be clear that hemp oil is the oil of the hemp seed, the same oil you can buy at the grocery store, and does not contain significant amounts of CBD. CBD is extracted from female hemp or cannabis flowers (not the seeds), and so women should be careful not to be confused by marketing that masks hemp products as CBD products.”

CBD’s interaction with receptors such as the hippocampus (responsible for emotion and memory) is also why the compound is used as an anti-anxiety treatment. The World Health Organization’s expert committee on drug dependence suggests that CBD can help calm and support that area of the brain. Because CBD isn’t psychoactive, it isn’t regulated by the government the same way THC is. Beauty companies are able to create topical stress-relief products and oral calming tinctures that don’t require government approval or testing. The lack of medical grade CBD in these products can create a snake-oil conundrum, especially for women who are directly marketed these products.

Iarocci adds, “All consumers looking for cannabis products of any kind should be very aware of where they obtain the products from. The illicit market sellers, both brick and mortar and online dispensaries, can be very tricky…there is no way to verify that the dispensary CBD lotion actually has any CBD in it at all.” 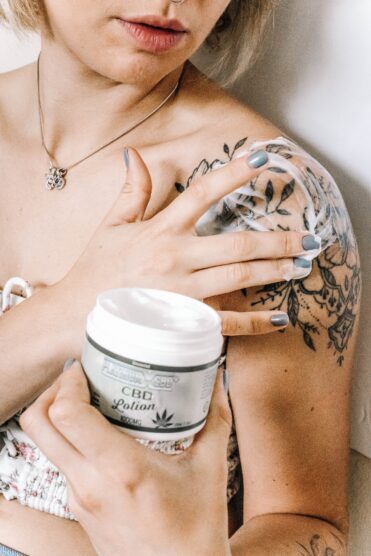 The real question is, do women need anxiety cures more than men? Do they experience stress and anxiety levels at a higher rate? Most would be quick to say yes. And while the Anxiety and Depression Association of America stipulates that “from the time a girl reaches puberty until about the age of 50, she is twice as likely to have an anxiety disorder as a man,” in Canada as of 2018, 36 per cent of women had been diagnosed with an anxiety disorder by a doctor compared to 24 per cent of men. That’s not a huge discrepancy in diagnostics, but there are no CBD products targeted toward men for stress relief—or even gender-neutral ones, for that matter. Not until we exit the wellness world and enter the mainstream cannabis domain.

Cannabis dispensaries, which are strictly regulated by Health Canada, have seen a major spike in sales over the last few months of COVID. If there were ever a time when both genders were searching for ways to relax, it’s now. Dosist, a California-based cannabis company, specializes in vape pens that emit targeted 2.5-milligram doses meant to affect different potential areas of concern such as anxiety, stress, pain, sleep, and arousal. The cannabis oil cartridges are formulated with different ratios of THC, CBD, and terpenes specific to each concern.

Terpenes are similar to essential oils found in flowers and are beneficial. For example, linalool, a terpene in lavender, is what gives the plant its relaxing properties and pleasant scent. These compounds are also naturally deriving in cannabis plants, which can be bred for different properties.

The cannabis industry is undoubtedly stigmatized and will probably remain so for another few years as people adjust to the idea of legalization. This could potentially contribute to the success of beauty companies co-opting pre-existing cannabinoid research and selling it to consumers without the fraught connotations that accompany strictly cannabis sellers. Women who have concerns that could be helped by cannabis should consider, however, going to the source and looking to companies with years of development and knowledge to support their claims. 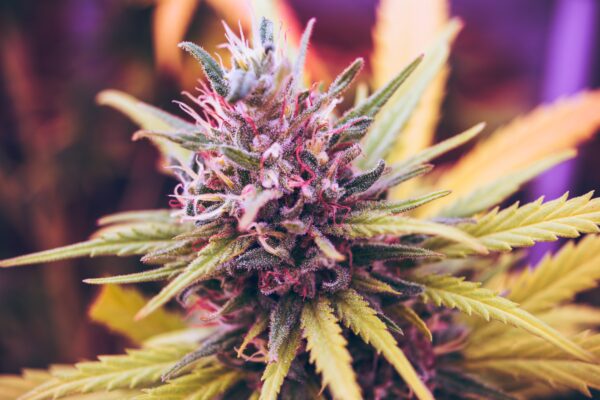 Often when gender is brought into a conversation, especially on health, there is a lot of misinformation disseminated on both sides. Harvard Business Review once observed that “women now drive the world economy.” It is not unheard of for businesses to create problems and then sell women solutions. The 2009 documentary Orgasm Inc. outlined this phenomenon perfectly by exposing how pharmaceutical companies invented the condition “female sexual dysfunction” to sell drugs and surgeries to fix what was at most a societal issue. That’s not to say that there aren’t women with very real health issues that affect their ability to feel sexual arousal, but by and large, women were being sold a medical solution to a cultural misunderstanding of the sexual response cycle. This is something we may be seeing again, as cannabis is now being touted as the new miracle orgasm drug for women.

Over the past year or so, many articles have come out supporting cannabis in the bedroom and claiming that women may be more aroused and have better orgasms faster than they would sober. The few scientific studies that exist to be quoted, however, are largely circumstantial and leave a lot unsaid. One from the Stanford University Medical Center’s urology department distributed its call for applicants at a chain of dispensaries, which suggests that all of the participants were already marijuana users. The study also claims neither “the type of cannabis used nor the method it was consumed impacted the results,” which is hard to believe given what we know about CBD, THC, and terpenes (plus, the smell of cannabis smoke can really kill the mood).

Doctors suggest that cannabis may enhance sexual encounters because it inhibits other stressors and makes the body more sensitive to touch. However, take too much and men can experience erectile dysfunction, and both genders can have paranoia or sedation, with women potentially suffering such adverse reactions as increased heart rate and panic more than men. Additionally, determining how much is too much can be difficult for first-time users (another reason the Stanford study may be misleading).

There is an orgasm divide. In heterosexual relationships, men orgasm 52 per cent more than women during sex. In committed relationships, the gap is smaller than in hookup culture, with women reporting they orgasm 63 per cent of the time and men 85 per cent. But really, the onus shouldn’t be on women to take drugs to orgasm more. Cannabis isn’t a cure. Better sex education that encourages a nuanced understanding of the female sexual response cycle and anatomy coupled with resources for women who may be experiencing physical pain, trauma, or other issues that affect sexual arousal is the primary solution to the “problem.” 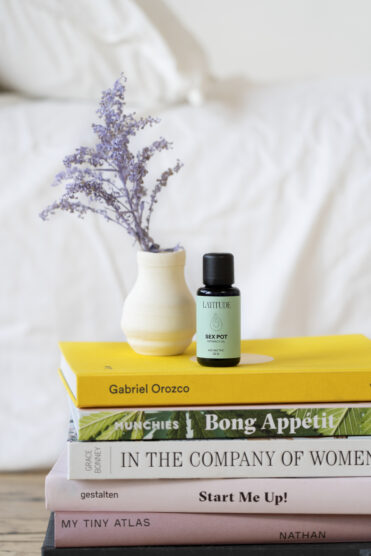 Doctors suggest that for those who do want to experiment with cannabis and arousal, a microdose of 1–2.5 milligrams is best. Alternatively, there are non-psychoactive lubricants and massage oils that also claim to enhance sexual encounters and are less risky than jumping straight to smoking, vaping, or edibles.

48North’s cannabis wellness collection Latitude features a topical THC lubricant that it claims has aphrodisiac effects and can aid female arousal. “Sexual wellness is a hot topic these days, and for good reason,” says Iarocci. “Women’s bodies go through a lot of changes, from hormones to childbirth, perimenopause, and beyond. Layer in all of the pandemic stress on top of that, and it’s not an easy time to feel in touch with yourself and your sexuality. Sex Pot is designed for women by women and can be used solo or with a partner.”

In the Canadian regulated market, availability of cannabis beauty and wellness products is still quite limited. However, legalization has created a boon for unregulated, potentially useless products. The reduction in stigma has allowed for the production of a whole new beauty minefield. Women are so often told what’s wrong with them and then sold products to fix that or, perhaps worse, coerced into mindless self-care consumerism. In general, women should feel empowered to make their own choices about what works for them and what doesn’t, but the adage will always ring true: buyer beware.

A Tale of Two Mechanics

Living as an American in BC During COVID